Diagnosis. Fore wing without discal seta, marginal vein with seta M1 present (rarely absent); Mt 8 in female transverse, without a medial emargination; body coloration variable but generally yellow, with or without brown markings on meso- and metasoma; antennal clava commonly dusky brown in distal 1/4–1/3 or entirely dusky brown. Many specimens have a characteristically long pedicel, although this is not always the case.

Signiphora flavella   is most similar to S. aleyrodis   , S. coquilletti   and S. xanthographa   ; however, these species are parasitoids of Aleyrodidae   ( S. flavella   is a parasitoid of Diaspididae   ) and always have brown markings on the mesosoma and metasoma, a uniformly tan or light brown antennal clava, and females have a rounded or v-shaped medial emargination on Mt8. In addition, S. flavella   lacks the distinct reticulate sculpture found on the vertex, frons and mesoscutum of S. xanthographa   . Signiphora flavella   is also similar to S. perpauca   , however the latter species has a discal seta in the fore wing.

Male. Length, anterior margin of pronotum to epiproct apex, 0.29–0.61 mm (n=8). As described for females except the following. Male coloration highly variable: as in female but without the dusky brown area at apex of metasoma. Clava length: scape length 1.40–1.79. Genitalia normal for flavopalliata   group, digitus with 1 apical denticle and 1 seta at its midpoint, length of digitus approximately 2× width. Ms8 a thin, transverse strip, extending to cerci laterally.

Discussion. The species we treat as synonyms of S. flavella   were described primarily on the basis of differences in coloration. For example, S. basilica   was distinguished primarily on the basis of lateral brown markings on Mt6 (the type of S. basilica   is from the same rearing as the types of S. flavella   ). Peck (1951) synonymized S. basilica   with S. flavella   and most authors (e.g. De Santis 1968; Gordh 1979) have followed this interpretation. This particular color pattern is most common in material from Argentina and Brazil, but with one possible exception, discussed below, we have no other evidence to indicate that it represents another species. In fact, the range of coloration in long series of reared material from California, Argentina, Brazil, Israel and Greece more than encompasses the patterns of coloration in the type specimens of S. basilica   , S. flava   , S. thoreauini   , and S. caridei   . Signiphora louisianae   was described from several male specimens. Although males of this species are not common in North America, the structural features and coloration of Dozier's type specimens do not differ from that noted in the male specimens from Argentina, Mexico and Peru. Signiphora euclidi   was described from a single female specimen in balsam. Although this is a new record for the species from Australia, S. euclidi   appears to fall well within the limits of S. flavella   as here defined.

However, two different series of specimens may represent cryptic species. First, specimens from certain collections from four localities in Argentina [Buenos Aires, Saenz-Peña, 20-IV-1976, coll. Rose, ex armored scale on ivy, one ♀ in Hoyer's (UCRC ENT 299612); La Rioja, Aimogasta (Plaza), 30-XI-1968, coll. A. Teran, on olive or ex Chrysomphalus   on olive 8 ♀ and 3 ♂ in Hoyer's (SHYM0006 (IFML); UCRC ENT 299613); La Rioja, Mazán, 17-XI-1978, coll. A. Teran, ex Acutaspis paulista   on olive, 3 ♀ and 2 ♂ in Hoyer's (SHYM0007- SHYM0008, IFML) Tucumán, Ticucho, 31-III-1969, coll. Teran and Guyot, on leaves of Aspidosperma quebracho-blanco Schltdl.   , 5 ♀ and 2 ♂ in Hoyer's (SHYM0009 (IFML); UCRC ENT 299614)] differ in minor   but consistent ways from S. flavella   as here interpreted. Males are relatively common in these collections (7 out of 24) but are rare in S. flavella   . These specimens have short antennal clava (clava length:scape length 1.25–1.45 for females and 1.00–1.31 for males) and 4 or occasionally 5 setae on the scutellum, but agree with S. flavella   with respect to other structural features. The coloration of the metasoma of females in these is consistent: Mt1 and Mt2 brown, Mt3–Mt5 yellow, Mt6 yellow with brown lateral spots. As noted above, metasomal coloration in S. flavella   is quite variable but includes this pattern. We suspect that this material may represent a distinct species, but additional collections from Argentina and biological or molecular information will be required to confirm this. Second, many specimens in the long series from Nova Teutonia, Brazil, may represent another cryptic species. Males are also common in these collections, and specimens in of both sexes the frons and vertex are darker than typical S. flavella   specimens, and the sculpture on the vertex is weakly but distinctly reticulate (transversely striate in typical S. flavella   ). In addition, in these female specimens Mt8 is not transverse, but u-shaped and many specimens have a distinct medial incision on Mt8. Mt1 is bilobed with the medial portion either transverse or rounded in the material examined from California, but in other material Mt1 is bilobed with the medial portion rounded. Most specimens from California have 6 or 7 setae on the scutellum, but specimens from South America typically have 4. The ratio Mt1 length:Mt2 length is 1.0 in most specimens, rarely the ratio is 0.5 or from 2.0–3.0. Seta M1 is absent from the marginal vein of the fore wing in some paralectotypes and from one fore wing of the lectotype of S. flavella   . Otherwise, 6 setae are generally present on the marginal vein of the fore wing in this species.

Type material. Signiphora flavella   Girault—LECTOTYPE ♀ [here designated]: in balsam, Florida, Miami, coll. E.A. Bessey, bred 8-VI-1908, ex Aspidiotus lataniae   [now H. lataniae   ] on Ochras sapota (sapodilla); USNM Type 14196. PARALECTOTYPES: data as lectotype, 3 ♀ in balsam on same slide, USNM Type 14196. The specimen at the lower right (red USNM type labels to right) is here designated lectotype and the slide has been labeled accordingly. Signiphora basilica   Girault—HOLOTYPE ♀ [examined]: in balsam on slide with lectotype and paralectotypes of S. flavella   . Data as types of flavella   (see above); USNM Type 14197. The specimen that matches the original description of S. basilica   is to the left and slightly above the lectotype of S. flavella   (red USNM type labels to right). Signiphora euclidi   Girault—HOLOTYPE ♀ [examined]: in balsam, Indooroopilly, Feb. 3, 1935, QM Holotype T.8826. As noted in Dahms (1983); Girault provided the following information in his unpublished ms.: “The type was a single female taken from a window in forest country”. Signiphora flava   Girault—HOLOTYPE ♀ [examined]: in balsam, Peru, Lima, coll. C.H.T. [Townsend], with following data: 192o3a, Nov. Gen. 2 d, sp. 1, sec 31-09, T., USNM Type 14195. Signiphora thoreauini   Girault—HOLOTYPE ♀ [examined]: in balsam, USNM Type 19209, California, Santa Barbara, coll. P.H. Timberlake, 14-XI-1911, ex Aspidiotus hederae   [now Aspidiotus nerii (Bouché)   ] on ivy, 14594c. Signiphora louisianae   Dozier— HOLOTYPE ♂ [examined]: in balsam, USNM Type 44819, Louisiana, New Orleans, coll. H.L. Dozier, 12-I- 1932, ex Aspidiotus lataniae   [now H. lataniae   ] or C. [ Chrysomphalus   ] dictyospermi (Morgan)   on oleander. PARATYPES: 2 ♂ in balsam, USNM Type 44819 (2 slides, one slide with holotype also); data as holotype. The slide with the holotype and paratype is not marked to indicate which specimen is the holotype. Dozier's (1933) description states only that the "type male and paratype male on single slide is deposited in the U.S. National Museum collection." Both specimens on the slide agree with Dozier's description. Signiphora caridei   Brèthes— SYNTYPES [examined]: regarding material from which this species was described, Brèthes (1914) describes female and male, and then states only: “Dr. Pedro Caride Massini, to whom I dedicate this species, has sent me in the middle of winter a few branches of a palm tree attacked by Diaspis pentagona   , from which I obtained more specimens of this interesting wasp.” Dr. Luis De Santis (personal communication) kindly informed us that the Brèthes collection was conserved in the Museo Argentino de Ciencias Naturales Bernadino Rivadavia (MACN). Following my request for the type(s) of this species, the MACN sent two slides. One bears three labels, as follows: "S17", " S. caridei   " on a red paper strip, and “ S. caridei   ” written in ink on the slide and covered with transparent tape. This slide has one female specimen mounted in Faure's or a similar medium, which has mostly dried out. The specimen is crushed and in poor condition, although the body and head are present and in adequate condition to allow observation of certain relevant details. This is one presumed female syntype. The other slide bears the following labels: "S18", a red paper strip with no writing, and “ S. caridei   ” written in ink on the slide and covered with transparent tape, and "Museo Argentino de Ciencias Naturales, Signiphora caridei Br.   , 187, det. In'tulo Semisman [the latter not clear]." This slide contains one female, condition as above, but more badly dried out. This specimen is a second syntype.

Biology. DeBach et al. (1958) mentioned that this species (cited as Thysanus thoreauini   ) develops as a primary parasitoid of Hemiberlesia rapax (Comstock)   and H. lataniae   ( Diaspididae   ). It is commonly reared from these scales in southern California and elsewhere, often in sympatry with S. merceti   . The species appears to be a common and cosmopolitan parasitoid of armored scales. The host range includes many species of Diaspididae   including: A. aurantii   , Aonidiella ensifera McKenzie   , A. nerii   , A. spinosus   , Aulacaspis rosae (Bouché)   ; A. paulista   , L. beckii   , Hemiberlesia palmae (Cockerell)   ; H. rapax   , Oceanaspidiotus spinosus (Comstock)   ; Parlatoria pergandii (Comstock)   ; Parlatoria pittospori (Maskell)   ; P. trilobitiformis   , and C. perniciosa   . Three specimens from South Africa fit the diagnosis of S. flavella   perfectly, but were reared from soft scales [Durban, Natal, iii.1964, C.J. Villiers, ex: soft scale on Grewia   sp. [TAMU-ENTO x0616172 and x0616176, SANC]; Cape Province, Port Elizabeth, xii.1963, J.F. de Villiers with Ceroplastes   sp. on Dovyalis caffra   [TAMU-ENTO x0616168, SANC], perhaps an indication of another cryptic species. Interestingly, 3 additional specimens with identical label data as the Durban, Natal specimens appear to be S. perpauca   , a similar species that has a discal seta in the fore wing, a feature which is not known to be polymorphic in Signiphora   , despite the long series of reared specimens of each species. This species is generally uniparental. Males are unknown in California and rare in collections from the southeastern USA, Mexico and Argentina. 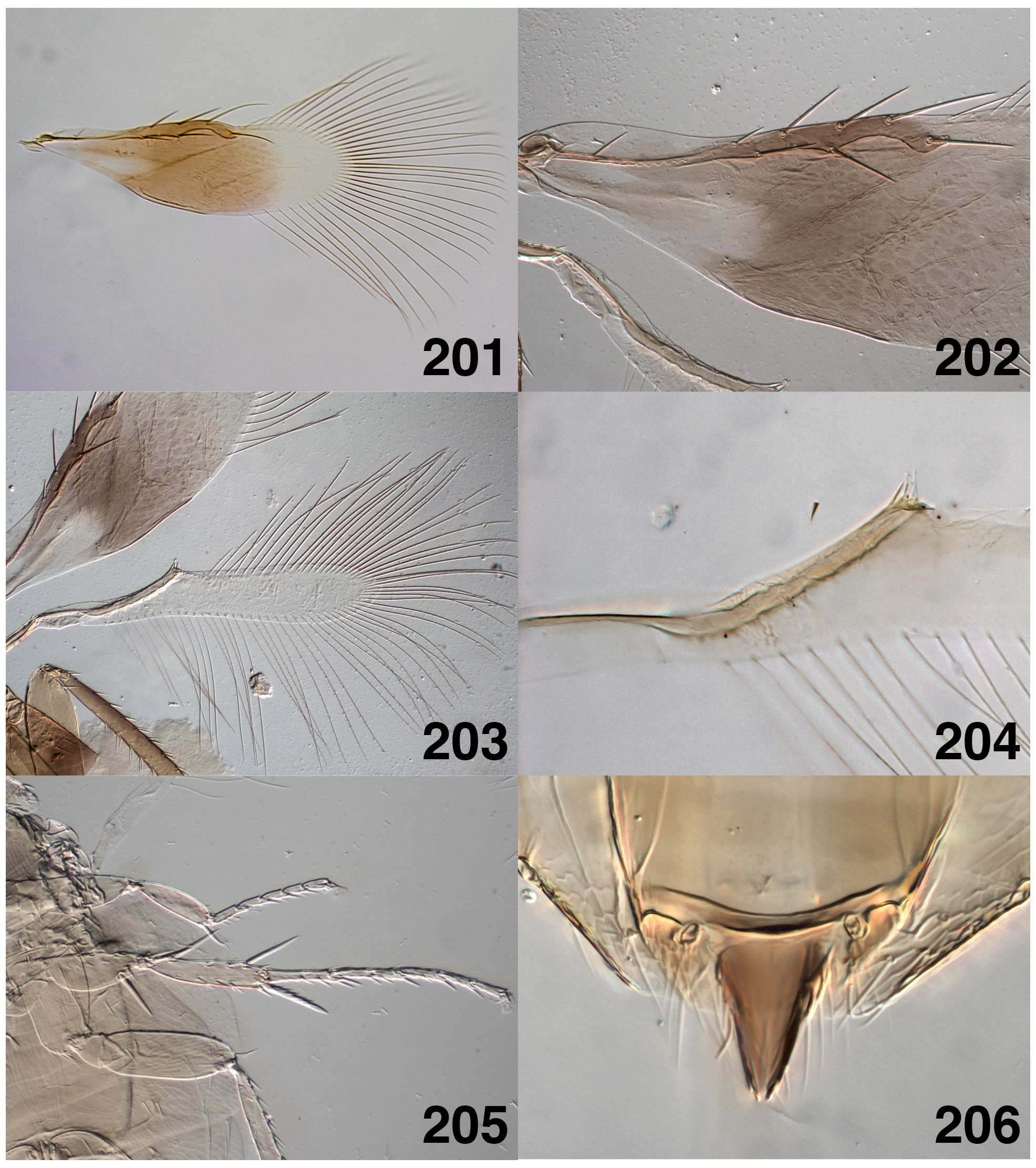 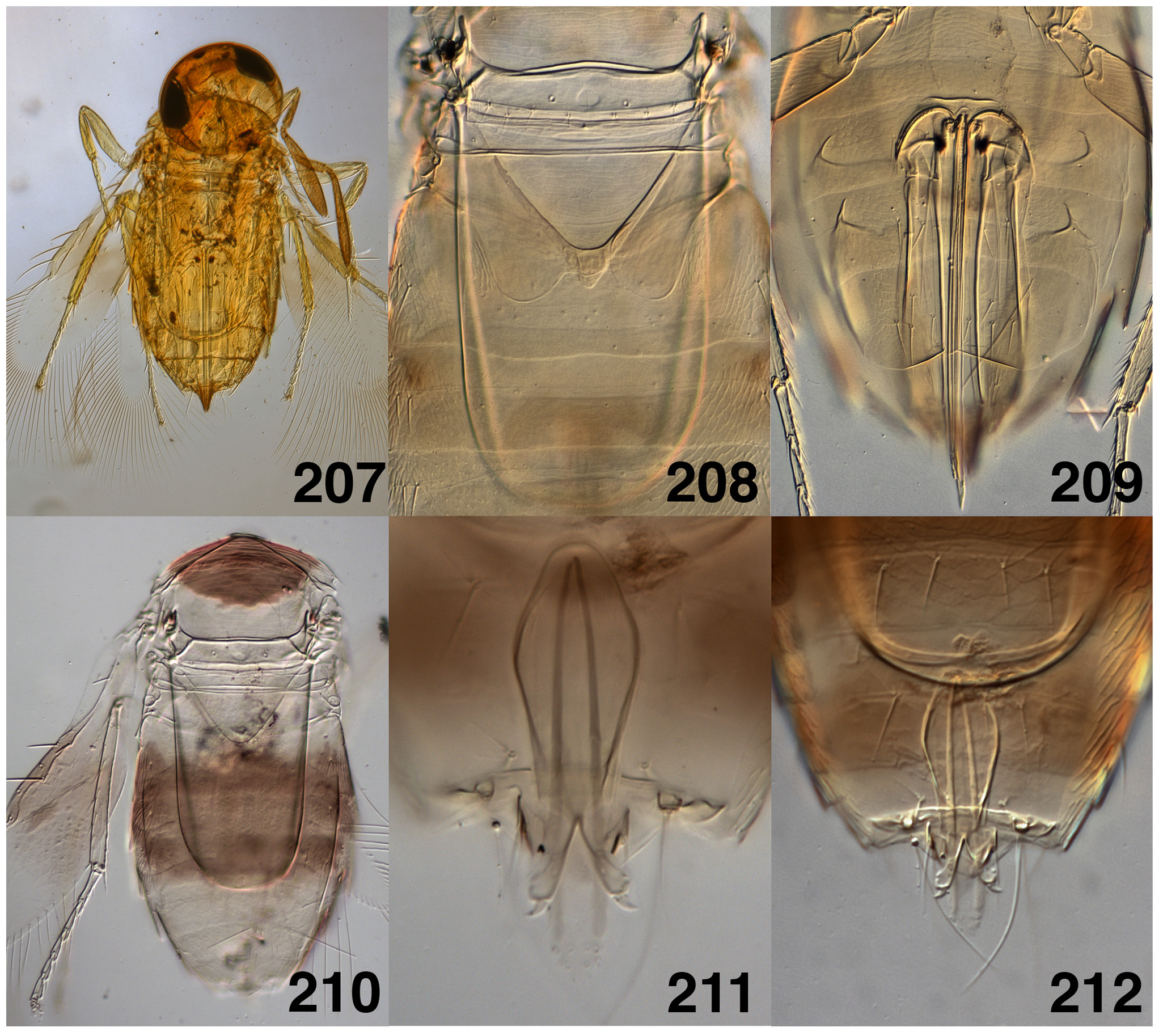