Distribution. N & NE Argentina, known from only a few specimens in two disjunct populations, one in Chaco and Formosa provinces, and the other in Misiones. View Figure

Descriptive notes. Head-body 6-8 cm, tail 5-5 cm; weight 10 g (estimated from the holotype). The Pygmy Opossum is probably one of the smallest living species of opossums. It has brownish dorsal fur. Hairs are gray at bases, buff in middle, and brown at tips, giving fur a frosted appearance. Body sides are predominantly buffcolored. Head is colored as dorsum on crown and in mid-rostral region, and it lacks any mid-rostral stripe. There are marked dark-brown eye-rings from nose to eyes that do not reach bases of ears, and cheeks are reddish-brown. Tail length is ¢.80% of head-body length, and tail is naked, dark brown above and paler below. Ventral fur is pale grayish-brown, except for chin where some buff hairs are present. Throat gland is present. Ears are very small. The only museum specimen is the holotype, a male, and therefore there is no information on presence or absence of pouch or number of mammae. Karyotype of the Pygmy Opossum is unknown. Little is known about this tiny and difficult-to-capture opossum. It was described from a single specimen in 1930, but no other specimens were collected until the 2000s when about dozen remains of Pygmy Opossums were found in owl pellets at five new localities. An additional specimen was collected in the 2000s but erroneously identified as an Agile Opossum ( Gracilinanus agilis ). Although the Pygmy Opossum was thought to be extinct, it proved to have been present for the last 80 years but had gone unnoticed in all surveys conducted in the area, perhaps because of low density or because it could not be trapped with usual methods.

Habitat. Humid Chaco and northern Campos ecoregions (no information on habitat where holotype was collected). The Pygmy Opossum originally identified as an Agile Opossum was captured in Chacoan grassland of tall grasses of “espartillo” ( Elionurus muticus ) and “chajapé€” ( Imperata brasiliensis ).

Food and Feeding. There is no specific information available for this species, although dentition of the Pygmy Opossum suggests a diet of mainly arthropods.

Activity patterns. There is no specific information available for this species, but the Pygmy Opossum may be primarily nocturnal because some specimens have been recovered from owl pellets.

Movements, Home range and Social organization. There is no specific information available for this species, but one Pygmy Opossum was captured in a pitfall trap in a grassland, suggesting at least a partial ground-dwelling lifestyle.

Status and Conservation. Classified as Vulnerable on The IUCN Red List. Based on limited capture data, the Pygmy Opossum has a disjunct distribution in remaining habitats within a relatively small area of occurrence (less than 20,000 km?*). Deforestation and conversion of habitat for agriculture are primary conservation threats where it occurs, but not enough is known about its actual population size and trends or natural history to be able to adequately assess its conservation status. 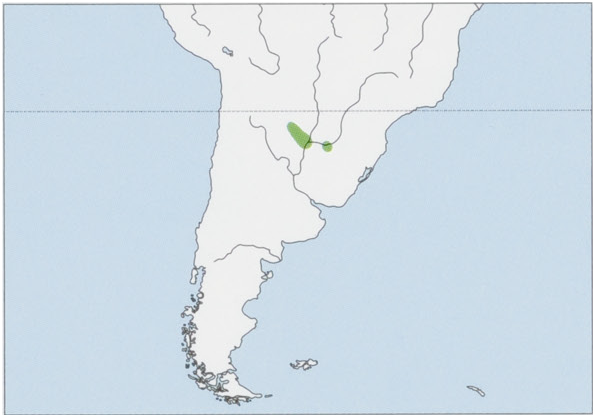 Distribution. N & NE Argentina, known from only a few specimens in two disjunct populations, one in Chaco and Formosa provinces, and the other in Misiones.