Etymology. Named after Dr. Leandro Manzoni Vieira, who was the first to recognize this species as new.

Description. Colonies encrusting, unilaminar, multiserial. Autozooids hexagonal to oval in shape, with distinct gymnocystal rim, separated by narrow grooves. Primary orifice subcircular. Poster with rounded (sometimes, more angular) outline, slightly smaller, almost as wide as the anter. Anter wall underlain by an inner lamina which ends form well-defined triangular condyles, with their blunt points directed to the orifice midline and slightly extending beyond the edge of step-like curve below. The collar-like peristome wide, subcircular, sometimes with parallel lateral sides. Its lowest proximal part with a small blunt projection and wrinkled lateral sides. In some colonies zooidal peristomes can bear 4–7 flat pointed processes. Frontal shield flat to slightly convex, perforated by 28–52 foramina (that occupy most of the frontal shield), each with wide and flat gymnocystal rim (often with wrinkles), raised slightly above the frontal shield which is smooth. Fusions between 2–3 foraminal rims are frequent. Marginal pores rounded or elongated, 1–2 most proximal ones are the largest. Avicularia are present on the outer raised wall of the 1–2 larger lateralmost foramina in some zooids. Each avicularium has a central nipple-like structure with a central pore. Kenozooids are very small, having 3–4 pores with centrally perforated cuticular plate. Vertical zooidal walls wide, represented by multiporous mural septula with 1–2 rows of communication pores. Ancestrula autozooidal, with foramina less closely spaced than in ordinary zooids.

Alagoas, Atlantic Ocean Remarks. Vieira (2008) and Winston et al. (2014) described and illustrated E. vieirai   n. sp. (as E. antillea   and Exechonella   sp. correspondingly) from the coastal waters of Brazil (with zooids having 40–53 and 45–60 foramina correspondingly). Other mentions of this species (also as E. antillea   ) were found in Souza (1989), Rocha (1995), Vieira et al. (2008) and Almeida et al. (2015), and Dr Vieira kindly informed us about the identity of these records (pers. com. 2016). Comparison shows that the orifice shape in this species is sub-circular with anter and poster of about the same size and with round outline (although the poster outline can be more angular in some zooids). Instead the poster (one-third) has angular outline and it is narrower than the anter (two-thirds) in E. antillea   . The peristome is mainly subcircular in E. vieirai   n. sp. although some zooids have its lateral sides parallel as in E. antillea   . In E. vieirai   n. sp. frontal foramina are closely spaced with wide and flattened gymnocystal rim, whereas it is more narrow and sloping towards the opening in E. antillea   . Also gymnocystal rim around zooidal periphery is poorly developed in the latter species whereas it is distinct in the former. Noteworthy, closely spaced foramina in E. vieirai   n. sp. are similar to those in E. pumicosa   , however, they do not form chains as in the latter species.

Morphological plasticity between the colonies Exechonella vieirai   n. sp. is seen when observing peristomes. In some colonies only few zooids have pointed processes on them, whereas in others all zooids have these processes, including ancestrula. There are also colonies having no processes on the peristomes at all or they could very low (Vieira, pers. comm. 2016). 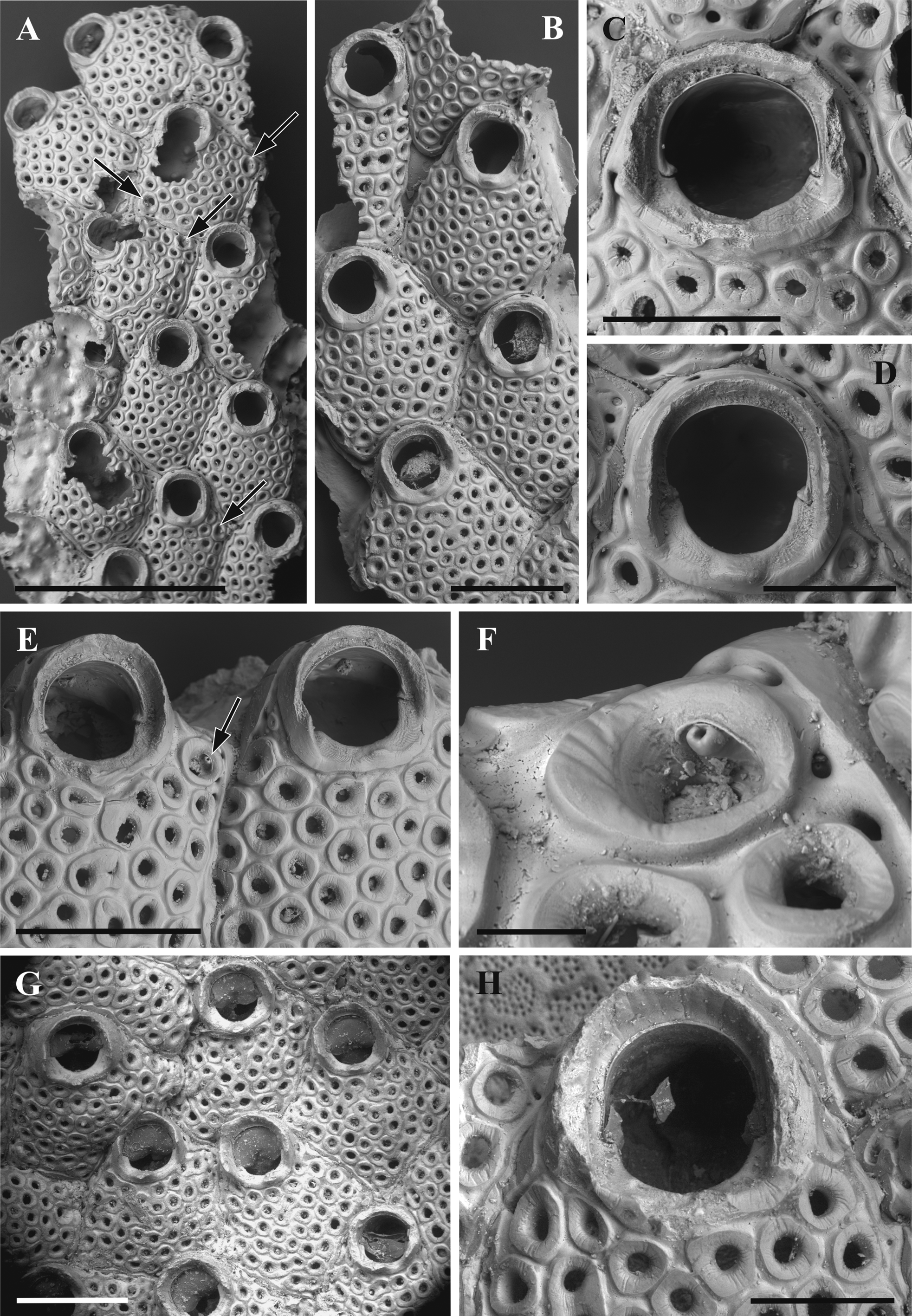