Material and distribution in Panama. GoogleMaps Fifteen specimens studied alive and whole mounted and four seriallysectioned specimens (three sagitally-sectioned ones and one horizontally sectioned) from Bahía Can Can, near to Portobelo   GoogleMaps , Panama (type locality) (9°32’23”N; 79°40’31”W), subtidally in a lagoon, fine-grained sand with some organic matter taken in between sea grass, 0.2 m deep at low tide, fine-grained sand taken intertidally in channels between the mangroves and medium coarse sand, 0.8 m deep, taken at the front side of the reef (March 3, 2016), one whole mounted specimen designated holotype (deposited USMNH 1480556 ), all the rest reference material deposited in the USMNH too (without reference number yet).

Diagnosis. Species of Myobulla with a prostate stylet type III 73 µm long, with a 90° curve in the middle and a distal flap. Proximal part of the stylet slightly smaller than the distal part.

Description. Animals about 1 mm long (measured on live animals), with two eyes ( Fig. 6 View FIGURE 6 A–B: e) and colourless, except for some long, pink glands along both sides of the body. Habitus and internal morphology similar to that of other species of Myobulla , hence, with unpaired gonads and a typical bursal stalk provided with an asymmetrical muscular bulb with a ring of four hard teeth. For a detailed description we refer to Artois & Schockaert (2000).

Prostate stylet type III ( Fig. 6 View FIGURE 6 A–C, E: ps3, 6F, 7C–D) 67–79 µm long (x̄ = 73 µm; n = 16). Proximal part gutter shaped, twisted around its axis and with an enlarged proximal end. Distal part tubiform, more or less perpendicular to the proximal part (90%) in more or less strongly-squeezed animals ( Fig. 7C View FIGURE 7 ) whereas the entire stylet is more straight in less-squeezed ones ( Fig. 7D View FIGURE 7 ). With a flap at about the middle of the distal tubular half. Proximal part of the stylet slightly smaller than the distal part (90%). The seminal duct enters the male atrium at the level where the stylet becomes tubiform, as in the other species of Myobulla . A bundle of basophilic glands opens into the male atrium (accessory glands type II).

Female system as in other species of Myobulla . Ovary kidney shaped, with the oocytes diminishing in diameter from the most distal to the most proximal. Bursa globular, with the muscular seminal receptacle with a ring of four teeth characteristic of the genus.

Discussion. Based in the general morphology and the detailed structure of the prostate stylet, the new species can easily be placed within Myobulla . The most conspicuous feature of the genus, the muscular seminal receptacle with a ring of four teeth (see Artois & Schockaert 2000; 2003), could easily be seen on all live specimens studied. In all species, the prostate stylet is proximally gutter shaped, becoming tubiform more distally.

Four of the five species (including the two new species described in this paper) have a hook-shaped stylet; only in M. myobulla Artois & Schockaert (2000) is it straight. The stylets of the other four species differ mostly in the relative length of the proximal part compared to that of the distal part, and in the detailed morphology. The stylet of M. dunata Artois & Schockaert, 2000 is sturdier in general, and its distal part is shorter than the proximal part. Myobulla swedmarki (Karling, 1978) Artois & Schockaert, 2000 has a stylet that has a much longer proximal part ( Fig. 7A View FIGURE 7 ), and the stylet is more delicate than that of M. dunata , M. armenterosi sp. n., and M. berti sp. n.. The distal twisted tip of the stylet in M. armenterosi sp. n. is unique within the genus Myobulla . The flap-like part at the level of the curve in the stylet is unique for M. berti sp. n.. As was shown in the specimens of M. armenterosi sp. n. and M. berti sp. n., the degree of squeezing can give the stylet a different appearance (see Fig. 7 View FIGURE 7 ), as was already discussed by Karling (1978) for M. swedmarki , but the distal and proximal part can always be easily recognised. Moreover, there seems to be some intraspecific variation in M. swedmarki , for which we refer to Karling (1978). 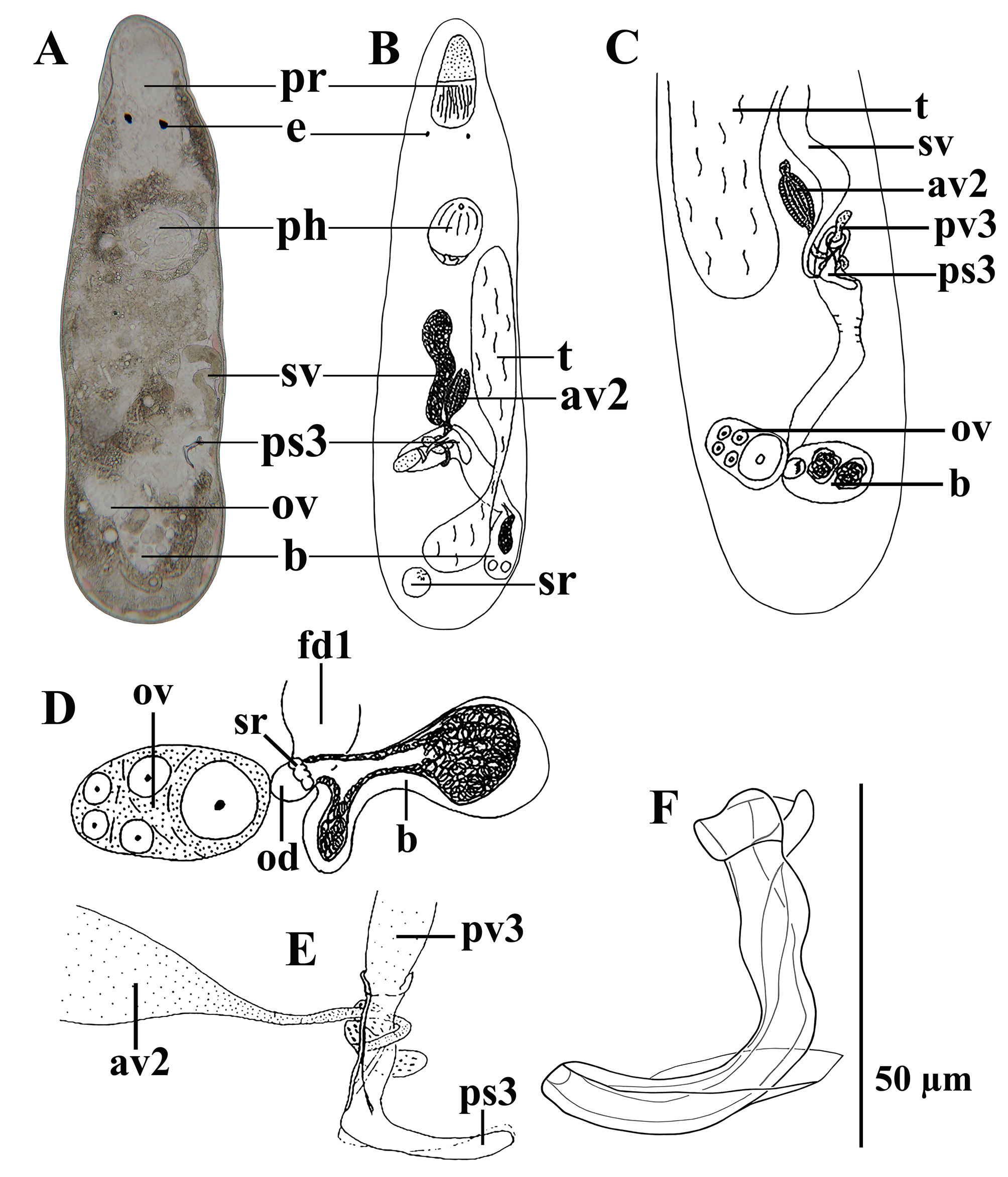 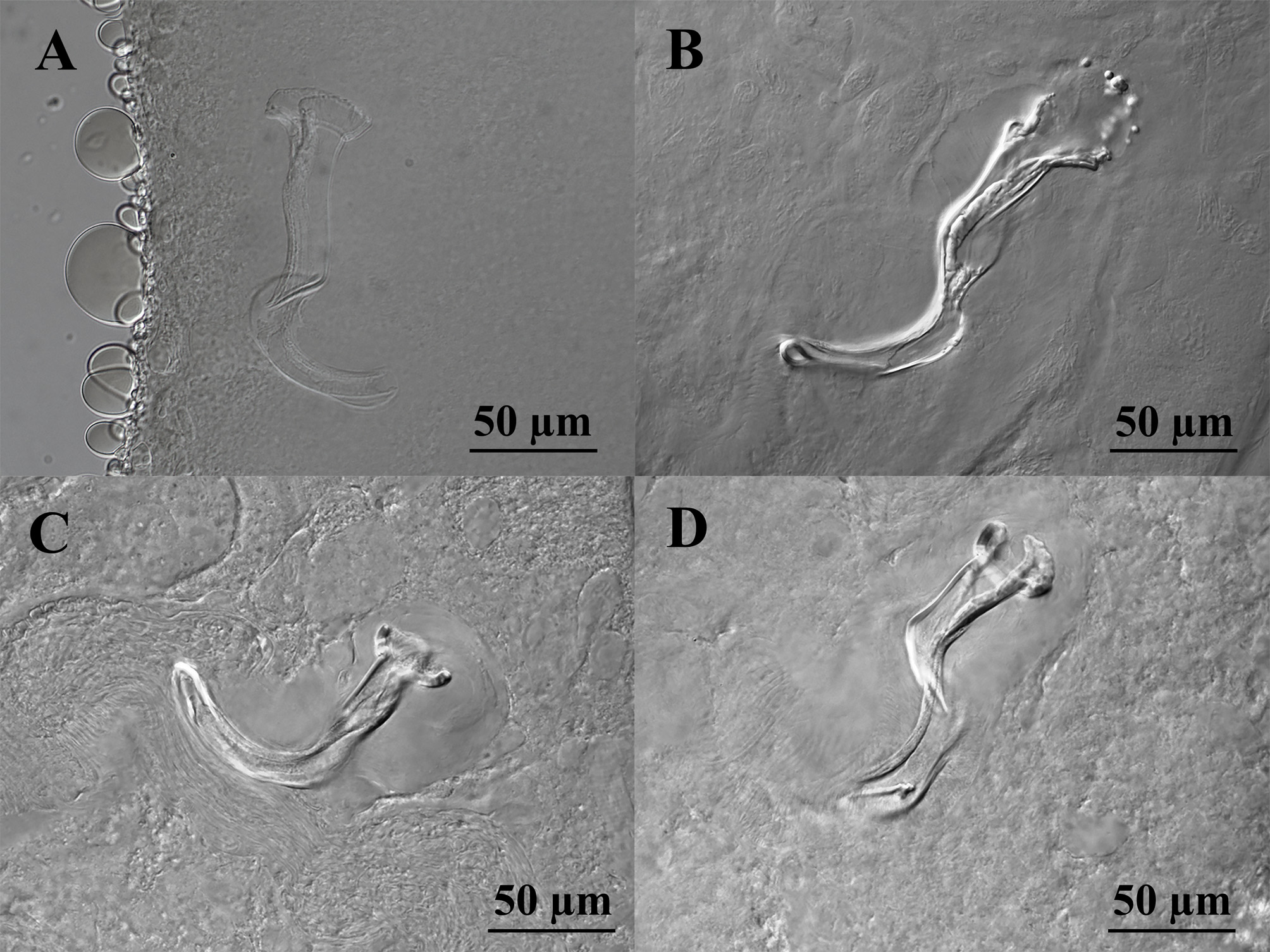