Etymology: The name is composed of the Latin prefix paucus (a few) and the adjective punctatus (spotted), alluding to the slightly pigmented body.

Distribution: Known only from the type-locality.

Epidermis, cutaneous musculature and sensory organs. The epidermis is pierced by openings from rhabditogen glands producing xanthophil rhammites, as well as from glands producing an amorphous, cyanophil secretion ( Figs. 16, 21 View FIGURES 16–21 ). Cyanophil glands are more abundant in the anterior extremity of the body. In addition, slightly erythrophil glands with coarsely granular secretion concentrate their openings at the body margins as well as medially at the posterior tip of the body, whereas the anterior tip receives finely granular, xanthophil secretion. Body pigment granules located beneath the epidermis.

Digestive system. Pharynx cylindrical, pigmented; about 1/5th of the body length. It is located in the median third of the body. Mouth at the posterior end of the pharyngeal pouch. An esophagus, between about 1/9th of the pharyngeal length, connects the pharynx with the intestine. Anterior intestinal trunk extending dorsally to the brain. Male reproductive system ( Figs. 17–20 View FIGURES 16–21 , 22 View FIGURE 22 ). Numerous testicular follicles, about 70–90 µm in diameter, arranged in various irregular dorso-ventral rows on either side of the body ( Fig. 17 View FIGURES 16–21 ). Testes extend from about just behind the ovaries to the posterior end of the body. Sperm ducts form spermiducal vesicles posteriorly to the pharynx, which ascend in an almost straight course laterally to the penis. Subsequently, the ducts decrease in diameter and turn anteriad to separately penetrate the penis bulb. The sperm ducts open dorsolaterally into the wide and ovoid bulbar cavity ( Figs. 18 View FIGURES 16–21 , 22 View FIGURE 22 ). The short ejaculatory duct opens at the tip of the conical penis papilla ( Figs. 19 View FIGURES 16–21 , 22 View FIGURE 22 ). The penis papilla is obliquely oriented in the male atrium, being about 150 µm long and 200 µm wide at its basis.

Penial glands producing fine, slightly erythrophil granules (perhaps with a cyanophil external part) discharge into the bulbar cavity and ejaculatory duct. This secretion is also present in the bulbar cavity ( Figs. 18–20 View FIGURES 16–21 ). Xanthophil glands and cyanophil glands, both with amorphous secretions, and erythrophil glands with finely granular secretion, open through the epithelium of the penis papilla, whereas sparse glands with an amorphous, slightly cyanophil secretion open into the male atrium.

Comparative discussion. Regarding external features, besides differing from its epigean congeners, the trogobitic Girardia paucipunctata   differs from most of other hypogean species by having a slightly pigmented dorsal surface and a pair of minute eyes ( Mitchell & Kawakatsu 1973b; Souza et al. 2015, 2016). Similar features are found only in the hypogean G. mckenziei ( Mitchell & Kawakatsu 1973a)   .

Notes on ecology and distribution. Both flatworm species were sampled in a single set of pools in travertine rock ( Figs. 3, 4 View FIGURES 1–4 ) situated in the eastern branch of “Areias de Cima” cave, thus being syntopic. The water hydrochemistry at the date of collection was as follows: pH = 8.0, temperature = 17.9°C, conductivity = 117.7 and dissolved oxygen = 5.30 g/l. The small set of pools ( Fig. 4 View FIGURES 1–4 ) is formed by water percolating from the epicarstic zone. Considering the fact that during flooding some pools can be submerged by the stream, the species may have colonized these pools from the stream. However, no specimens of either species were found in the streams during four sampling events in the cave streams between 2012 and 2014, in both rainy and dry seasons, in a total of 13 areas inside the caves. This fact strongly suggests that the main habitat of both species is the epikarst, and not the lothic subterranean system. Immediately adjacent to this sampling site, the troglobitic amphipod Hyallela epikastica Rodrigues et al., 2014   was discovered. This crustacean species was also found only at this site, thus also suggesting an epikarstic origin ( Rodrigues et al. 2014).

Usually, species presenting similar habits (especially feeding habits or strategies) tend to exclude each other when co-occurring in a given habitat ( Hardin, 1960). Considering the restricted food supply typically observed in caves, competitive exclusion even may be stronger. Thus, the occurrence of two sympatric flatworm species living in such a restricted and specialized habitat would be possible only if competitive exclusion is weak. The body size of both species is quite different, with G. arenicola   being almost 3 times longer than G. paucipunctata   , thus suggesting that the species may be exploring different microhabitats or even distinct resources in the same habitat. In another karst area in Brazil, distinct species of amphibious Styloniscidae   isopods were also observed sharing the same set of pools in travertine rock (R. Ferreira, unpublished data). Similar differences in size were observed in the isopod species, suggesting that size differentiation could act indeed to diminish competitive exclusion in such restricted habitats.

The morphological features of both species, which show small eyes and an unpigmented or only weakly pigmented body, as well as their location in pools formed by percolating water suggest that they are stygobiont. The fact that both species were collected only once at a single site in the period between July, 2012 and February, 2014, when four expeditions were made into this cave system, suggests that they have a very restricted distribution. The “Areias system” is a well-studied cave system, being considered as the richest system for subterranean fauna in Brazil ( Trajano 2007; De Ázara & Ferreira 2013; Rodrigues et al. 2014) and also one of the two hotspots of subterranean biodiversity in South America ( Souza-Silva & Ferreira 2016); it is located in a preserved area (Parque Estadual Turístico do Alto Ribeira). Hence, the environment from where both flatworms were collected seems to be well protected. 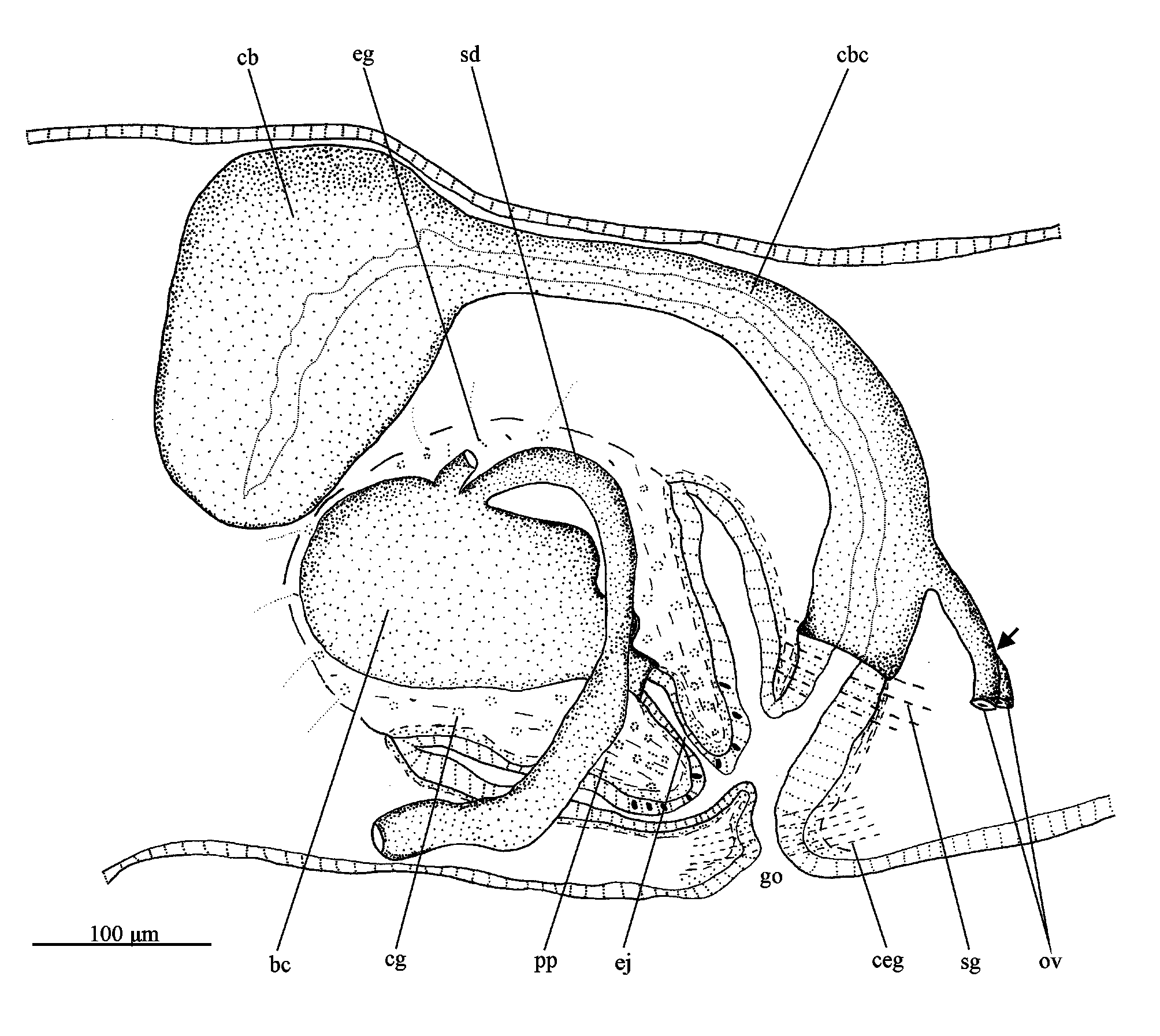 FIGURE 22. Girardia paucipunctata. Sagittal composite reconstruction of the copulatory apparatus of the holotype. The arrow indicates the joining point of the ovovitelline ducts. Anterior to the left. 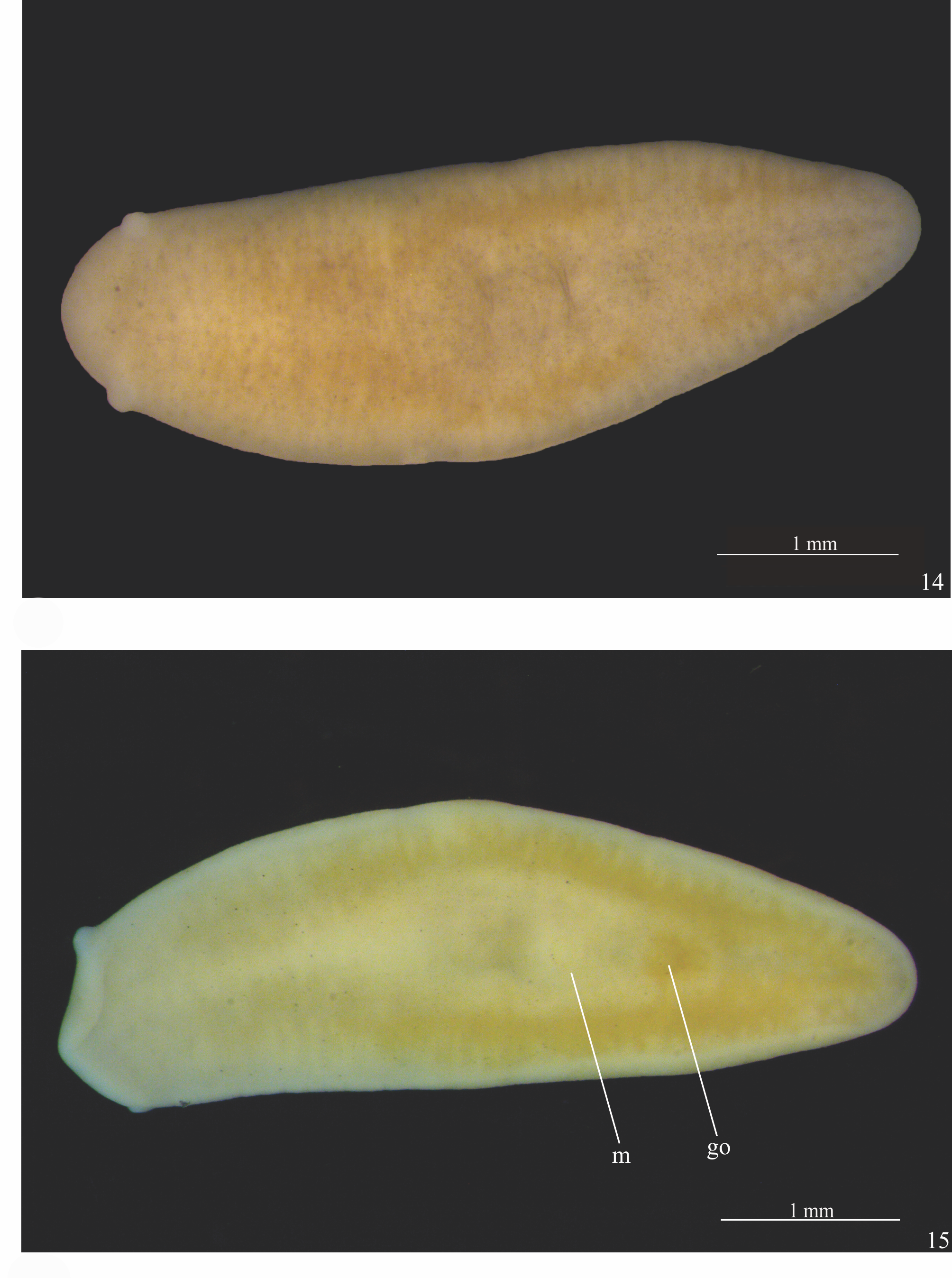 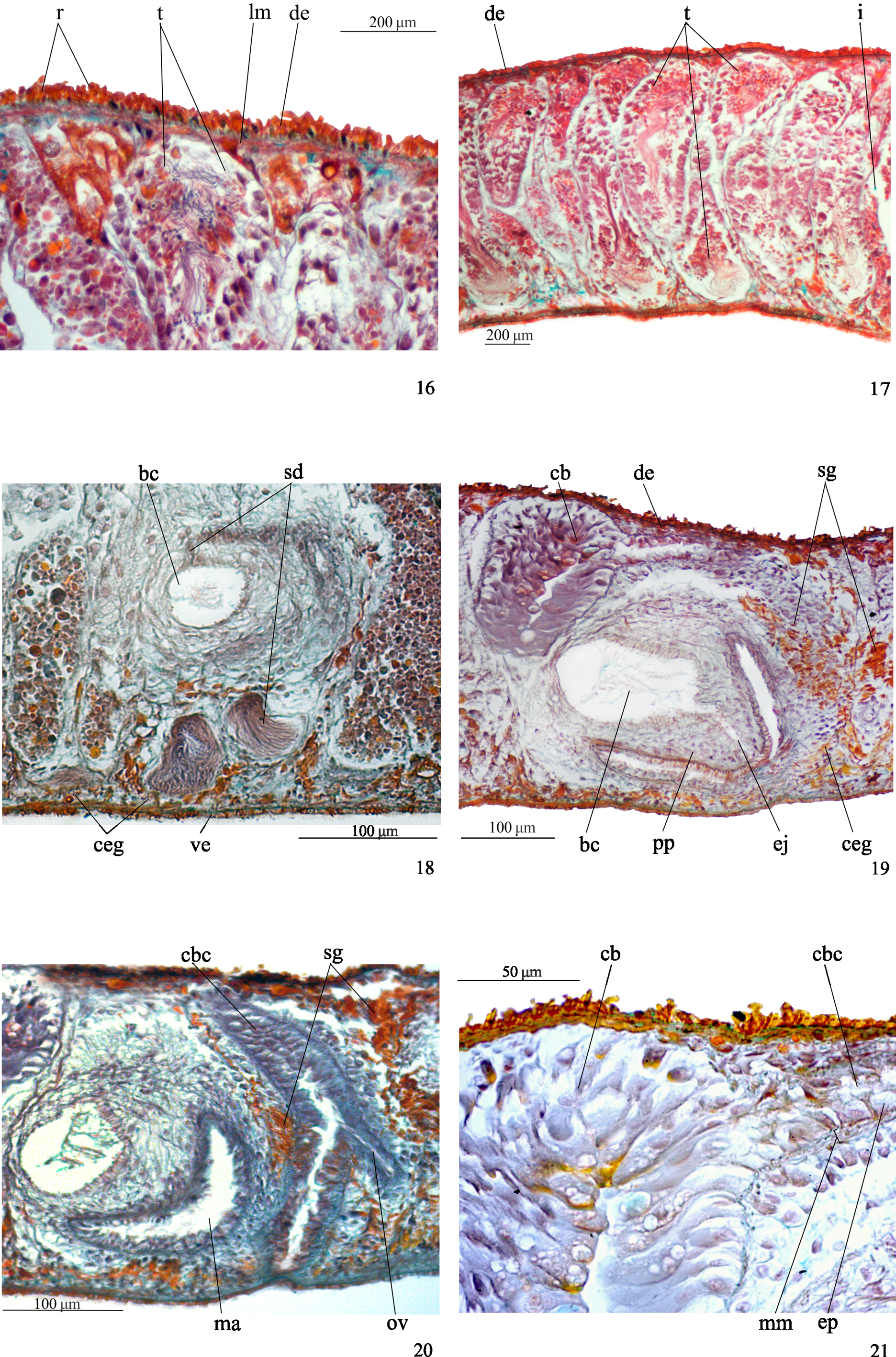 FIGURES 16–21. Girardia paucipunctata, holotype in sagittal section: (16) dorsal surface of the body; (17) testes in the anterior region of the body; (18–20) general view of the copulatory apparatus; (21) copulatory bursa and proximal part of the bursal canal. Anterior to the left. 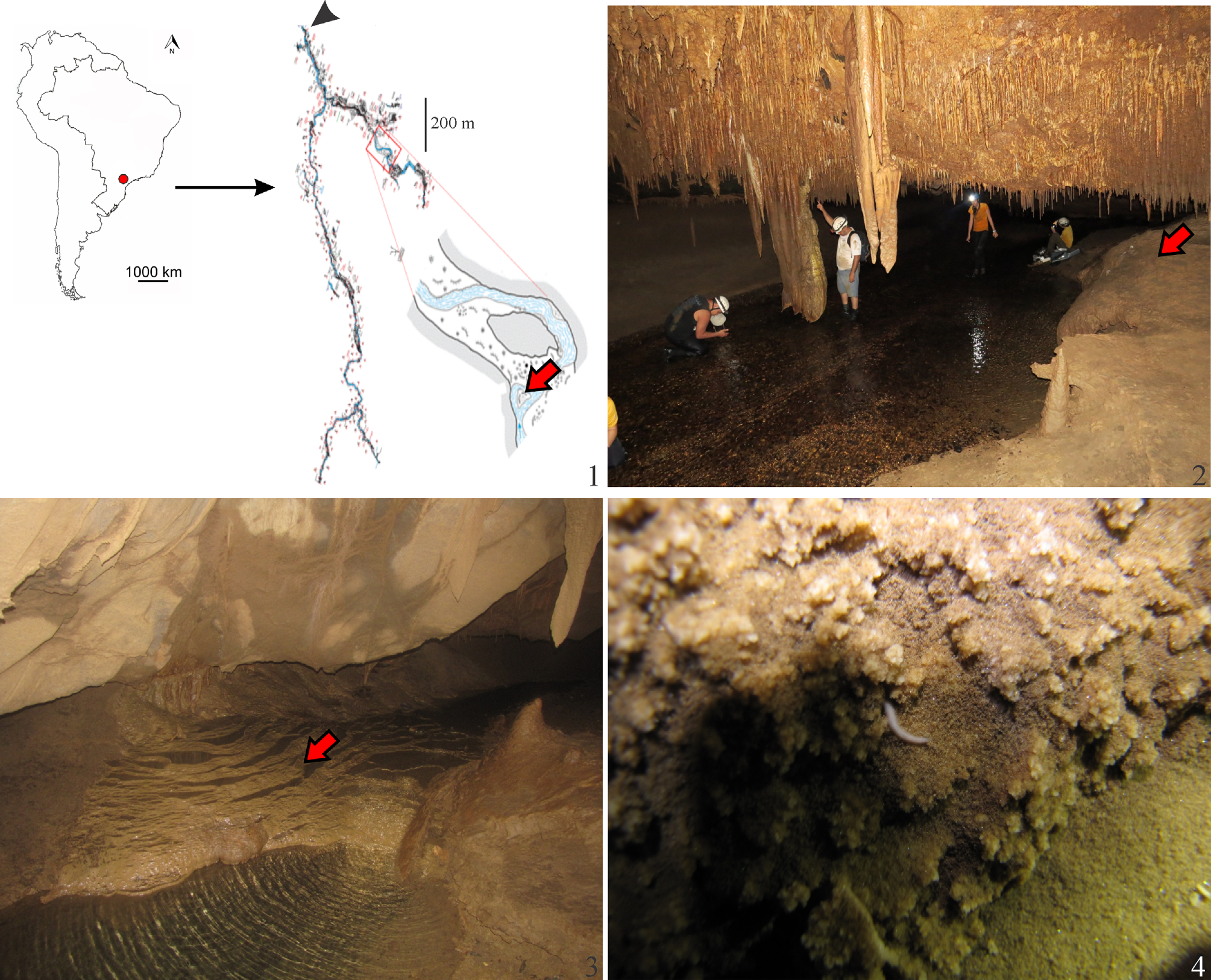 FIGURES 1–4. Type-locality of Girardia arenicola and Girardia paucipunctata in “Areias de Cima” cave, in the karst area of “Areias system”, Iporanga, state of São Paulo, Brazil: (1) location of the cave in southern America (modified from Rodrigues et al., 2014); (2) location of the sampling site within the cave; (3) travertine rock pool from where flatworms were collected; (4) flatworms at the bottom of the travertine rock pool. The arrowhead indicates the cave entrance; arrows indicate the sampling site.