Etymology. The name is derived from the Tao aboriginal tribe on Orchid Island, Taiwan, as a tribute to their oceanic cultures.

Habitat. The worm appears to capable of making a burrow in coral or coral and algal mixed reefs and building leathery tube which protrude a few to several tens of centimeters above the reefs. However, some individuals utilize burrows of the boring bivalve, Jouannetia globulosa (Quoy & Gaimard, 1835) (Family Pholadidae ), to build tube in sandstone and shale.

Distribution. Known only from Taiwan, occurs in low intertidal and subtidal habitats on eastern and southern coasts of Taiwan.

Colour. In life, anterior body of the worm is orange red with purplish iridescence on the dorsum ( Fig. 8 View FIGURE 8 A). This orange red colour fades away at the middle portion of the body and is replaced by whitish with light orange on both sides of the posterior body. Eyes are dark brown colour.

Remarks. Eunicid polychaetes with compound spinigers are often referred to the genus Euniphysa Wesenberg-Lund, 1949 ( Fauchald 1977: 106) . However, Fauchald (1992) noted that three species in the genus Eunice Cuvier, 1817 , namely Eunice impexa Grube, 1878 , Eunice tubicola (Treadwell, 1922) and Eunice tubifex Crossland, 1904 , also have compound spinigers, although E. tubifex was transferred to the genus Euniphysa by Miura (1986). In the study of phylogeny and biogeography of the genus Euniphysa Wesenberg-Lund, 1949 , Lu & Fauchald (2000) argued that some Eunice spp. may have both compound spinigers and falcigers as in members of Euniphysa , but those Eunice spp. differed from members of Euniphysa in having short, triangular maxillae teeth (vs. long pointed maxillae teeth), short and distinctly articulated prostomial antennae (vs. slender and smooth prostomial antennae). On the basis of the above arguments, they proposed a new combination of Euniphysa misakiensis Miura, 1987 as Eunice misakiensis ( Miura 1987) and acknowledged four species ( E. impexa , E. misakiensis , E. tubicola and E. tubifex ), which have compound spinigers as belonging to this genus. The present study adds another species to this group of Eunice .

Eunice taoi sp. nov., is the largest worm among the Eunice species discussed in the present study, with some individuals reaching over 710 mm. The body size and the length of the worm tube of Eunice taoi sp. nov., appears to vary within the different habitats which it occupies. Worms collected from sandstone and shale habitats tend to be much smaller in body size and shorter in tube length than those from coral and algal mixed reefs. Presumably, the body size and tube length of the worm are dependent on the depth of burrows made by J. globulosa , which is often only a few centimeters deep. This may suggest that Eunice taoi sp. nov. cannot bore into shale rocks but can utilize burrows made by the bivalve. However, they appear capable of boring deep into coral reefs; in many collection attempts, we traced those leathery worm tubes deep inside coral reefs by digging out the entire worm tube. However, those worms are still out of reached and hiding deep in tubular burrows. Some of larger sized worms were collected at depths of more than 30 cm deep within the reefs. 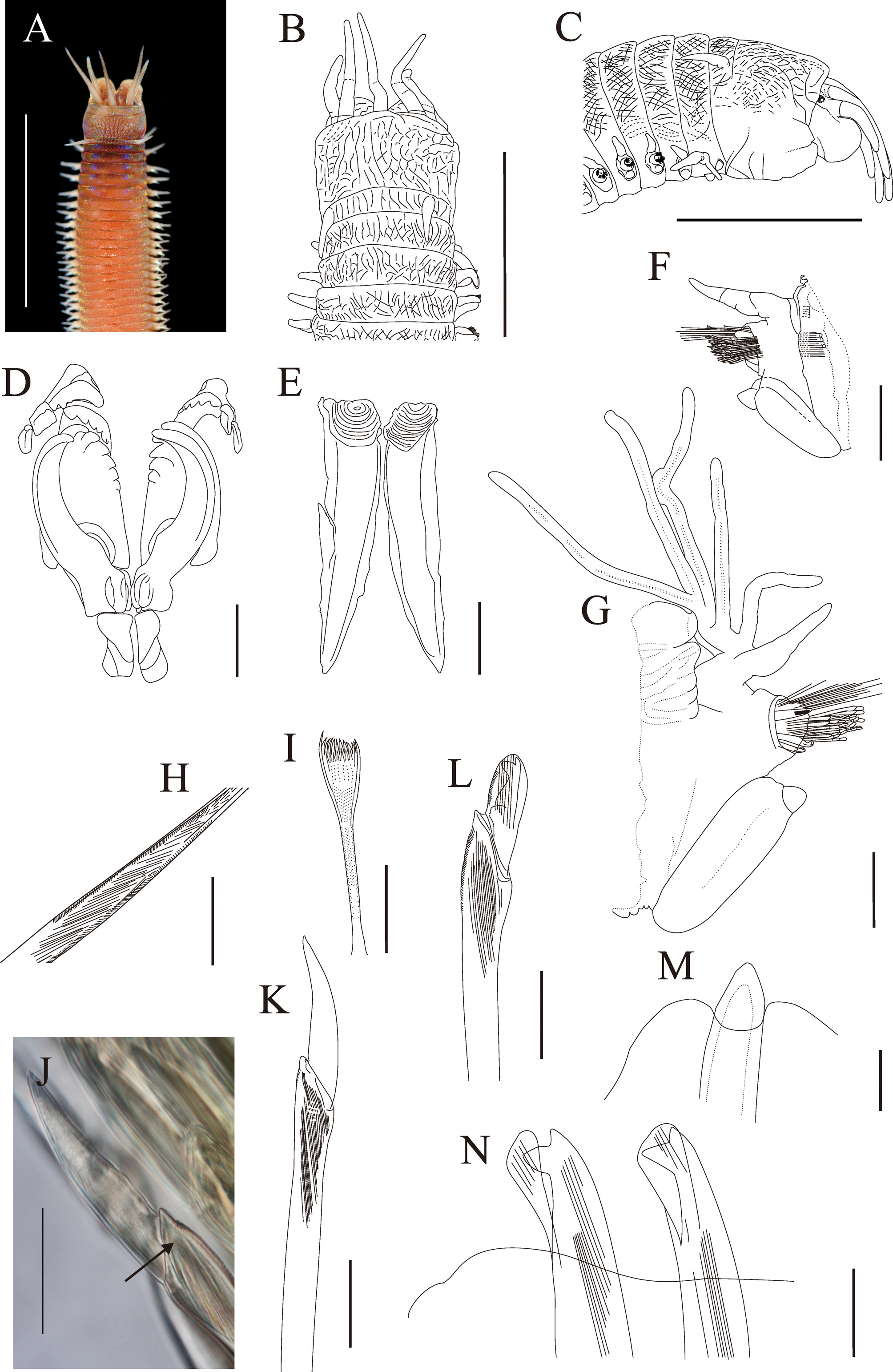