Diagnosis. Males of P. arizonensis can be distinguished from the very similar species P. heteroptera and P. mexicana by the gonostylus without an apical notch and apex of paramere broadly rounded (see detailed discussion and comparsion of these three species in “Remarks”).

Remarks. Historically all specimens of Penthetria from the USA were considered to be P. heteroptera . However, specimens from southern Arizona (previously determined as P. heteroptera by various workers including the present author) represent a distinct species ( P. arizonensis ). Within the USA, allopatric populations of P. heteroptera (East of the Rocky Mountains) and P. arizonensis (southern AZ) are easily distinguished based on differences in the apex of the gonostylus; P. heteroptera has the apex of the gonostylus minutely truncate, the truncate portion often slightly notched ( Figs. 16–20 View FIGURES 16–20 ), with the anterodorsal side of the notch often produced into a small point, while the Arizona specimens studied all have the apex of the gonostylus broadly rounded or broadly rounded and culminating in an obtuse median point ( Figs. 7–8 View FIGURES 7–8 ). While these morphological differences and the correlated allopatric distribution seem to indicate two distinct species, the study of Mexican and Central American specimens attributed to P. arizonensis revealed variation in the apex of the gonostylus (the broadly rounded apex is sometimes very minutely truncate (as in Fig. 19 View FIGURES 16–20 ), though never notched), which make these specimens, in some cases, indistinguishable from some specimens of P. heteroptera from the eastern USA that have only a very slight truncation and lack a notch. It is unclear whether the slightly truncate gonostylus in P. arizonensis is simply intraspecific variation or if there is some integration between the two species, but as no definitive specimens of P. heteroptera (gonostylus with an apical notch) have been studied from south of the USA (either in this study or by Hardy (1945)) and the fact that P. mexicana also sometimes has the gonostylus slightly apically truncate, the conclusion adopted here is that of intraspecific variation. Regardless of this inability to reliably distinguish some Mexican and Central American specimens from some eastern North American specimens, the two forms have been treated as distinct species; P. heteroptera east of the Rocky Mountains in USA and Canada and P. arizonensis from southern Arizona, USA to Central America. P. arizonensis likely represents the species identified by Hardy (1945) as P. nigerrima (Bellardi) , which was originally described from Mexico (see “Unrecognized Species of Penthetria ” below).

Females of P. arizonensis are indistinguishable from females of P. heteroptera , P. mexicana and P. yakima , but they can be distinguished from P. appendicula and P. distincta , which have more slender posteromedian lobes on sternite eight and the second segment of the cerci more elongate ( Figs. 46–48 View FIGURES 46–49 ), and from P. neonigrita , which has a more strongly developed tergite nine ( Fig. 54 View FIGURES 54–57 ).

Etymology. The specific epithet is taken from the type locality, Arizona, USA. 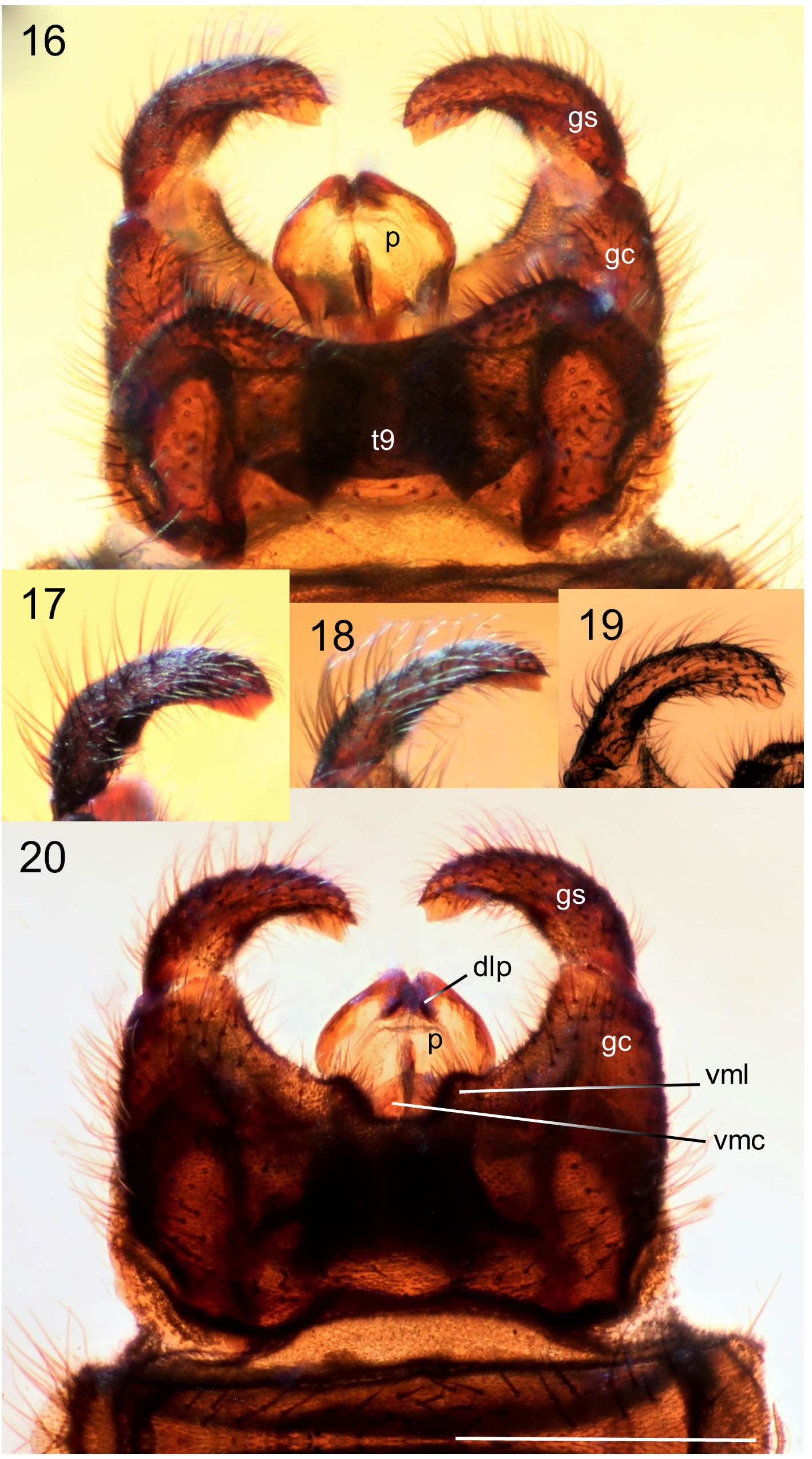