Colless, D. H., 1998, Morphometrics in the genus Amenia and revisionary notes on the Australian Ameniinae (Diptera: Calliphoridae), with the description of eight new species, Records of the Australian Museum 50 (1), pp. 85-123: 91-93

Crosskey (1965), following Paramonov (1957), recognised two subspecies of A. leonina   , but substituted Macquart's older name albomaculata   for Paramonov's enderleini. Crosskey felt that subspecific status was warranted by the degree of allopatry in the known distributions ( A. leonina   in the north, A. albomaculata   in the southeast), a feature which has, in this case, held up under the increase of material. Basing my concept of the two taxa on the presence ( albomaculata   ) or absence ( leonina   ) of at least one median marginal bristle on abdominal tergite 3, plus certain male attributes discussed in Part 2, their currently known distributions are shown in Fig. 8 View Figure 8 .

To examine any correlated morphometric differences, I selected 50 male specimens of each taxon (as identified by the bristle character) and measured Frw, Hdw, Eyh, and Gnw (as defined above); also the maximum width of the eye in half-facial view (Eyw) and the length of wing-vein R4 +S PCA of the six dimensions showed a fairly clean separation of the two taxa, but with a few highly anomalous specimens from both. There were also signs ofthe existence of yet another form, represented by several specimens from Eyre Peninsula, South Australia. The PCA results were based mainly on general size and Frw , which together accounted for 92% of variation   .

A second, more extensive study was therefore made, using all available males- 205 in all-and a reduced character set. The latter comprised Hdw, Frw, and (as a more easily measured, non-head character) the distance between the posterior pair of dorsocentral bristles (Pdc). PCA of the three dimensions yielded a first, "size" component on which the two taxa were distributed apparently at random and which took up only 58% of variation. However, components 2 and

3 (with 35% and 7% respectively) were more informative. Component 2 was dominated by Frw, and component 3 by a contrast between Hdw and Pdc. In view of this, and the small number of characters used, the ordination is more clearly presented (Fig. 9, p. 94) as a simple plot of Frw against Hdw , both scaled by division by Pdc. MDA (not shown) gives a very similar result   .

Figure 9 demonstrates that "normal" A. albomaculata   and A. leonina   are quite well separated by relative head width alone. Frons width serves mainly to distinguish certain exceptional populations of A. albomaculata   (Fig. 9: "New England " and "Southern" forms). Nor does this reflect any north-south, clinal type of variation. Within each taxon, and omitting the exceptional populations, there is no detectable correlation between normalised head width and latitude.

The simplest explanation of those observations is that some degree of hybridisation is occurring between A. leonina   and A. albomaculata   in the general vicinity of Brisbane, with head shape and the bristle character segregating independently in the hybrids. Nonetheless, if suchhybridisationis possible it becomes difficultto explain how outliers manage to persist-such as the male A. albomaculata   from Mackay, deep in the home range ofA. leonina   , and the 4 female A. leonina   from Sydney. 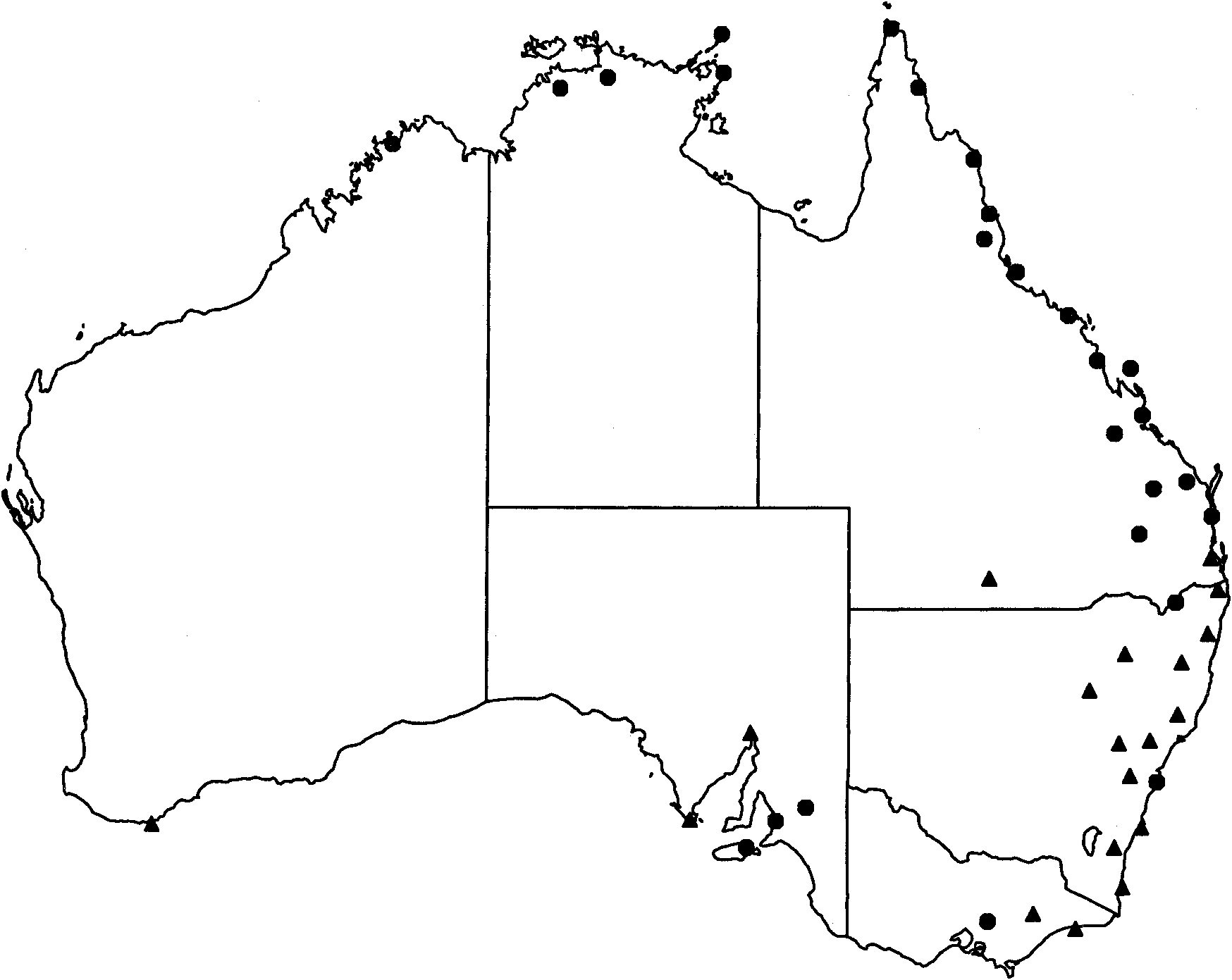