Etymology: The species name refers to the specific epithet of the definitive host.

Description: Based on 20 eggs obtained from both swans of Lake Pellegrini. Eggs ( Fig. 4 View FIGURE 4 ) elongate with an asymmetrical bulge, one end with a slender process either straight or slightly curved, and the opposite end a longer curved process; 215–291 (252.6) long by 34–56 (47.9) wide.

Remarks: The male specimens of Nasusbilharzia melancorhypha n. gen.; n. sp. obtained from the nasal tissues of the black-necked swan have a particular combination of characteristics that make them unique, and do not match with any previous diagnosis of schistosome genera. These worms have a filiform body with spiny tegument, a blunt posterior end, two well developed muscular suckers, a robust gynaecophoric canal with thickened cross bands, armed cirrus, and testes start at the posterior end of the gynaecophoric canal with around 130 testes. Results of the sequence analysis confirm the distinctiveness of these worms and place them at the base of the large avian schistosome clade. They do not group with any of the more commonly found genera from anatids like Allobilharzia Kolářová, Rudolfová, Hampl, & Skírnisson, 2006 , Anserobilharzia Brant, Jouet, Ferte, & Loker, 2013 , and Trichobilharzia ( Figure 2 View FIGURE 2 ; Table 1 View TABLE 1 ). Additionally, relatively few species of Trichobilharzia inhabit the nasal tissue as adults ( Table 2 View TABLE 2 , 3).

According to Blair & Islam (1983) almost all Trichobilharzia species produce approximately the same shape of egg. The eggs obtained from nasal tissue of black necked swans are similar in shape to those of Trichobilharzia species from nasal tissues; there is a middle bulge, with one end with a straight to slightly curved process and the opposite end a longer curved one. The egg size of Nasusbilharzia melancorhypha is within the range given for other species that parasite nasal tissue ( Table 3). Nasusbilharzia melancorhypha eggs differ from those of the genus Giganthobilharzia which have oval eggs with a spine on one end ( Akramova et al. 2010); they differ from Dendritobilharzia eggs which are round to oval, and aspinose ( Vande Vusse 1980); they differ from those of Allobilharzia , which have a “duck head” shape at one end, and at the other end, a slender prolongation with a slightly curved process at the top ( Kolářová et al. 2006); and they differ from Anseroblharzia eggs which are ovoid and have a small recurved terminal spine ( Brant et al. 2013). FIGURE 2. Phylogenetic trees based on Bayesian Inference of the 28S rDNA gene tree. The samples from this study are in bold and highlighted in a gray box. Nodal support is indicated by posterior probabilities (*=1.0) and GenBank accessions follow the taxon name. 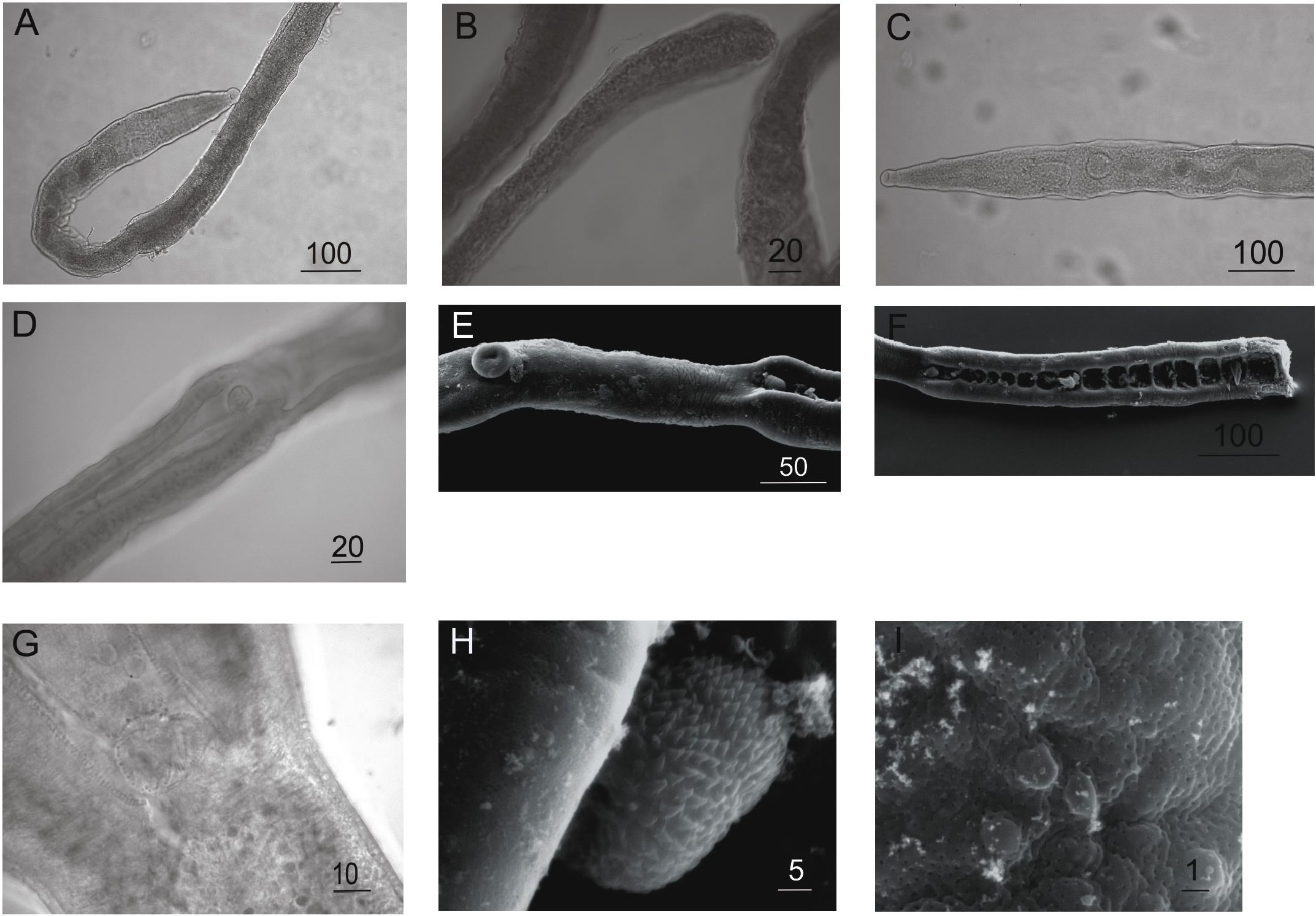