This species has several generations between late June and mid-September, during which it forms two types of galls in buds and inflorescences. The bud galls are single-chambered and contain only one larva; they are composed of a cluster of leaves that are wider and shorter in the outer part of the gall, and thinner and longer in its inner part, resembling a rosebud ( Fig. 17 View Figures 15–22 ). Some of the wider leaves have a very wide central longitudinal vein that is lighter in colour than the remainder of the leaf. Galls are 40–200 mm wide at the base, and most often found in the apical bud but sometimes also in lateral buds. The base of the galled bud is wide and somewhat rigid. The innermost leaves are joined to form a conical, apically tapered chamber, the internal walls of which are lined by white mycelium. As the gall matures, the innermost leaves turn black. The galls are very common from late June to mid- August, and become scarcer thereafter. Adults were reared from them from late June to early September. Beginning from August, when inflorescences start developing on the host plants, these are also galled by A. pseudorosa   sp. nov. Infested inflorescence buds do not usually show any external signs of infestation, although they may appear somewhat wider than normal buds ( Fig. 15 View Figures 15–22 ). The larva feeds on the developing inflorescence within the closed bud, and the gall is accompanied by a white fungal mycelium that lines its internal walls. Larvae and pupae are found in the inflorescences during August, and adults emerge from mid-August to mid-September. The bud galls of this species are heavily attacked by the predator/inquiline Youngomyia podophyllae   , the large orange larvae of which usually occupy the central chamber of the gall, but are occasionally found among its outer leaves. Between two and ten inquiline larvae can be found in a single gall, usually with no signs of the larva of the gall inducer, but it is not clear whether they actually prey on it before taking over the gall. The inquiline larvae are very active and squirm out of the gall when disturbed. When they are present in the gall, the fungus lining the central chamber is not as apparent as when the Asphondylia   larva is present. Some inflorescence galls were also found to contain inquilinous larvae, usually with one found per gall. The larvae of the gall inducer and the inquiline are both orange, but the latter are much bigger, longer, and more active, and the two species are easily distinguished by their spatula shape. Larvae of a second species of gall midge inquiline, Clinodiplosis comitis   sp. nov., were often found among the outer leaves of the bud gall. These are much smaller than both the Asphondylia   and the Youngomyia   larvae, and are pale yellow. Other natural enemies found in the galls are two species of parasitic wasps: one that induces dark, spherical endo-galls, such as those found in Asphondylia   snap galls, and the other that pupates freely inside the gall. Both are usually found in groups of between four and eight individuals. Parasitism rates in galls may reach 90%.

Colour pattern as in A. monacha   . Individuals from bud galls are notably larger than those from inflorescence galls.

Female abdomen: Dorsum covered by black scales, pleuron and venter with silvery hair-like scales. Tergites 1–7 rectangular, with posterior row of strong setae and otherwise evenly covered by scales; tergite 8 narrower than preceding tergite, without setae. Sternites 2–6 with posterior row of setae and several setae on mid-dorsal part; sternite 7 much longer than preceding sternite, narrowed posteriorly, with group of strong setae on posterior half. Sclerotized part of ovipositor 2.10–2.61 as long as sternite 7 (N = 2) in individuals from bud galls; 2.23–2.53 times as long as sternite 7 (N = 5) in individuals from inflorescence galls.

Antennal horns clearly different between pupae from buds and pupae from inflorescences. In pupae from buds, antennal horns long, almost straight, apices pointed and serrated in frontal view; in pupae from inflorescences, antennal horns very short, wide and blunt in frontal view. Cephalic setae minute. Upper facial horn divided into two apices separated by shallow, curved notch. Lower facial horn curved dorsally at apex, on each side with two papillae, one bearing relatively long seta. Frons on each side with three lateral papillae, one setose, two asetose. Prothoracic spiracle long and slender, with widened base; trachea ending at apex. Abdominal segments, except for first, each with posterior straight row and two or three anterior, less ordered, rows of spines.

Asphondylia pseudorosa   sp. nov. can be easily distinguished from other Asphondylia spp.   on goldenrods by association with its host plant and galls: the bud gall is single-chambered, resembling a small rosebud, and is not as flat as the galls of A. rosulata   sp. nov. and A. solidaginis   on Solidago rugosa   and S. altissima   , respectively. Pupae developing in buds are very similar morphologically to those of A. rosulata   sp. nov., A. solidaginis   , and A. silva   sp. nov., which all differ from pupae of A. monacha   in having more slender, tapered antennal horns. Individuals of A. pseudorosa   sp. nov. that develop in inflorescences are the smallest of the Asphondylia species   on goldenrods, and are the only ones known to use this plant organ. Their pupa differs from that of all other goldenrod-associated Asphondylia   in having short antennal horns that are distally truncate rather than tapered.

The name pseudorosa   refers to the typical appearance of the galls, which resemble rosebuds.

Smaller bud galls of similar structure to those described above commonly develop in lateral buds on this host, and at this point it is unclear whether they represent a separate species. The adults and immature stages described here were taken from the larger bud galls. Some pupae taken from small bud galls have shorter, blunter antennal horns than those of pupae from large galls, representing a transitional condition between pupae from large buds and from inflorescences. More detailed morphological and molecular work will be needed in order to determine whether the different types of bud galls on Euthamia graminifolia   represent different species. Our molecular analysis failed to separate between individuals from bud and inflorescence galls, hence they are described here as belonging to the same species.

Leaf snap galls are uncommonly found on E. graminifolia   ( Fig. 16 View Figures 15–22 ), and we were unable to rear adults from them. We attribute these galls to A. pesudorosa   based on the pupal morphology and on the similar situation observed in A. solidaginis   and A. rosulata   sp. nov., where the same species induces both snap and bud galls on its host plant. 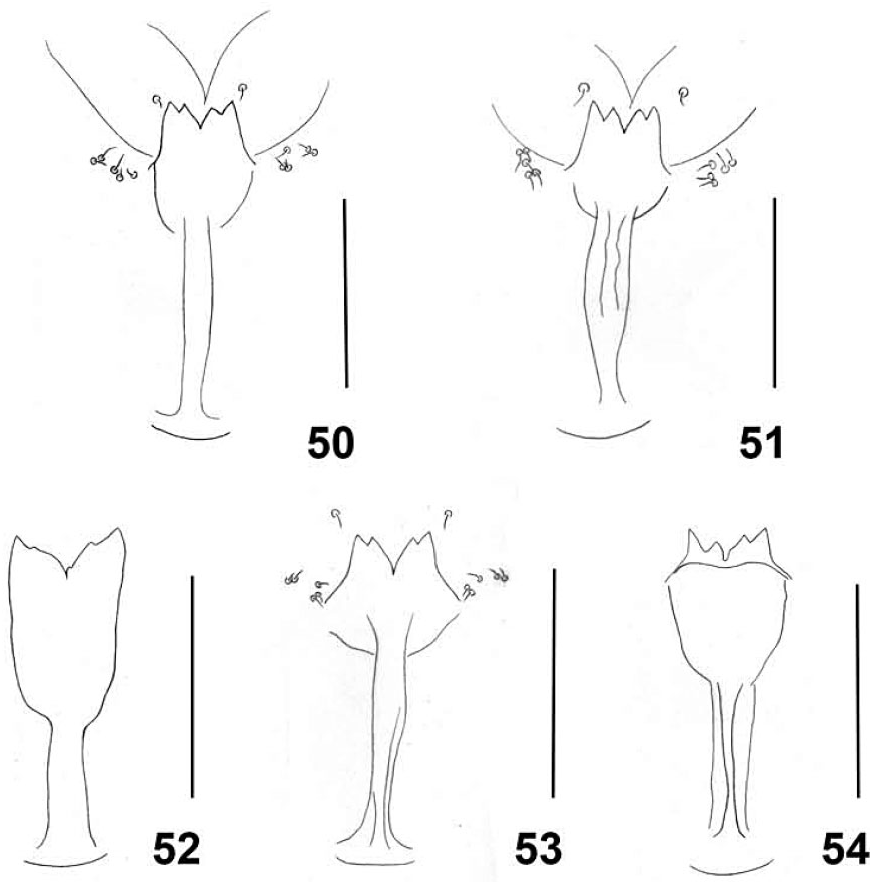 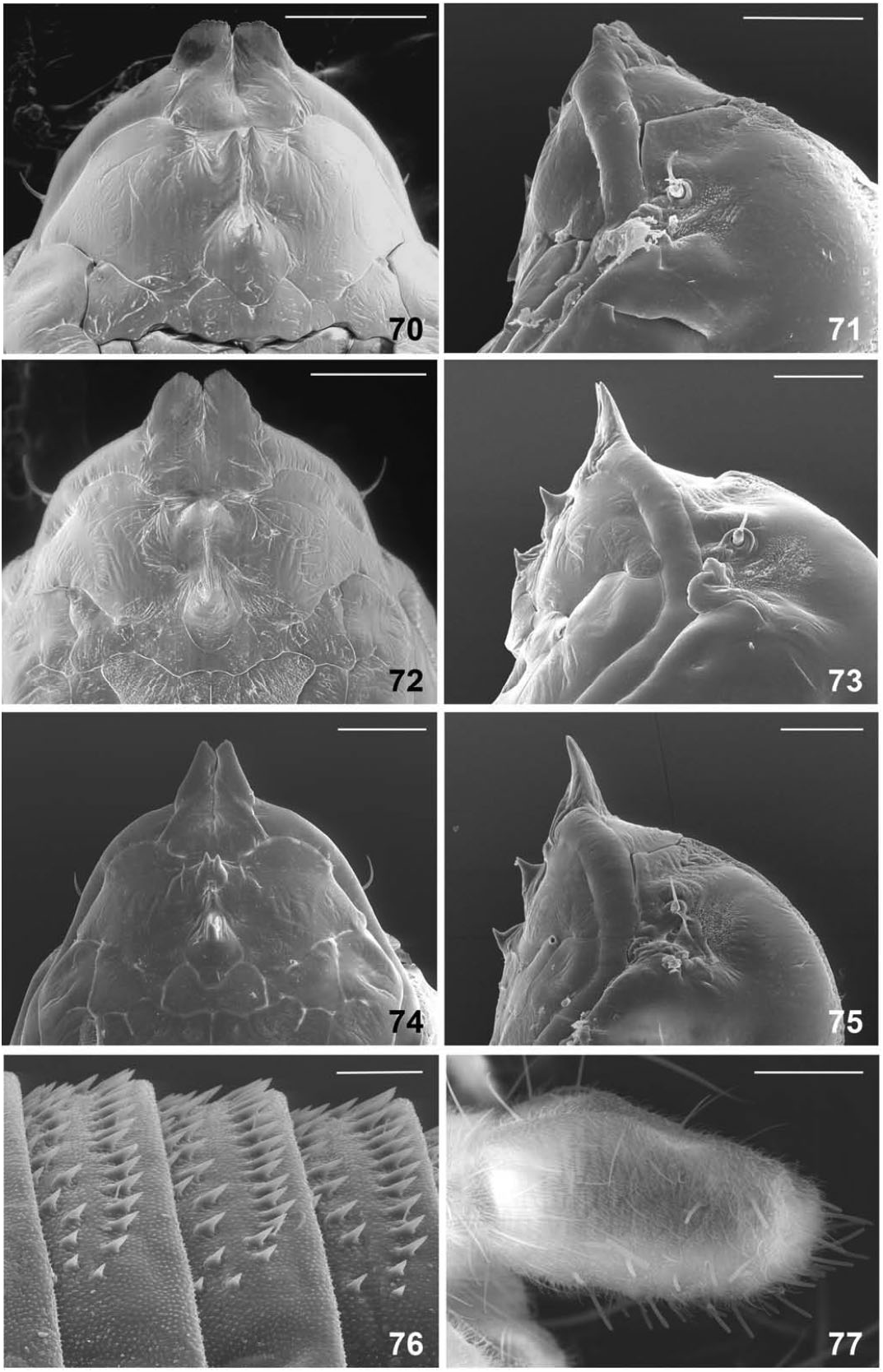