Diagnosis. A large Cyrtodactylus   (SVL to 132.5 mm) with enlarged tubercles on antebrachium absent, moderately-developed dorsal tubercles in 20–24 longitudinal rows at the midpoint of the trunk (axilla-groin interval); 35–45 ventral scale rows at the same level, a continuous series of 58–66 enlarged femoroprecloacal scales extending from one knee to the other, each scale bearing a pore in males; mental bordered posteriorly by a small median scale (replacing the tip of the median posterior extension of the mental), and a pair of postmentals; lips pale, strongly contrasting with the brown upper face; dark dorsal bands on trunk three, with a narrow dark edge posteriorly but the anterior margin blending with the pale interspace; pale interspaces between dark body bands lacking blotches or spots; basal tail bands more than twice as wide as pale interspaces.

Laterally, tubercles commence over temporal region (a few may be present in the postinfralabial area) where they are low and rounded and only slightly larger ( Fig. 11J View FIGURE 11 ) than those of the head dorsum, then along nape and body, where they are smaller and noticeably less protuberant than those dorsally, and along tail, commencing on tail base as low, posteriorly deflected, conical scales, then rapidly losing differentiation within the first dark tail band ( Fig. 14E View FIGURE 14 ).

Ventrally, gular scales small, rounded and juxtaposed, becoming larger, flat and more imbricate over body venter, from clavicular region. Ventral scales at midbody, between ventrolateral skin folds 35–45 (mean = 40.0, sd = 2.63, n = 16). Ventral scales on brachium and antebrachium like gular scales. On ventral surface of thighs, but not on crus or in precloacal region, an abrupt junction between enlarged imbricate scales and much smaller scales posteriorly, enlarged scales 58–66 between distal extent on each thigh (mean = 62.1, sd = 2.54, n = 16). Ventral scales of tail base like those of body, most of tail venter with a single median series of very broad scales about four times the width of adjacent ventrolateral scales.

Precloacal and femoral pores present in males, in a single continuous row, arching shallowly anteriorly in precloacal region. Pores 58–66 (mean = 62.5, sd = 2.62, n = 11), best developed in precloacal region where they are deep and transversely oriented, becoming much shallower, smaller and rounder distally under thigh. No pubic groove. About three large, blunt-tipped postcloacal spurs on ventrolateral surface of tail base, more projecting in adult males than in females.

Colour in preservative. Dorsal pale ground colour fawn. Head dorsum ( Fig. 11E View FIGURE 11 ) somewhat darker but relatively unmarked, bordered posterolaterally by a narrow pale band. Pale nape zone bordered posteriorly by a Ushaped dark chocolate-coloured chevron on nape, widest vertebrally, and extending anteriorly over temporal region to eye, then visible as a narrowing, increasingly diffuse streak over the lores to the nostril; chevron deepest along vertebral region and with a small U-shaped dip on posterior midline. Second broad dark transverse dorsal band over shoulders, lateral margins extending anteroventrally in front of forelimbs. Three dark bands over trunk, extending lateroventrally with even width, but dissipating over flanks. One dark band over hips. Tail with dark bands over most of length, but these become increasingly diffuse near tip. When they can be counted to the distal end of tail, dark tail bands 11 (n = 2). On nape and body, the dark bands are markedly broader than the pale interspaces, and the posterior margin is strongly edged with darker pigment; each dark band fades progressively, often producing a water colour-like effect before merging with its anterior pale band. Dark tail bands ( Fig. 14E View FIGURE 14 ) prominent chocolate brown and of similar width to body bands but much more distinct; more than twice as wide as pale interspaces. Pale interspaces of body unmarked.

Etymology. From the Greek πρó (pro = before) and ναρóς (naros = flowing), alluding to the blending of the anterior edge of the dark body bands with the preceding pale interspaces.

Distribution. Known only from a small area of the McIlwraith Range, north-east of Coen, Queensland ( Fig. 21 View FIGURE 21 ). The three localities are within 22 km of each other, and all are at about 500 m asl. It is possible that the species occurs at higher elevations — the known localities represent accessible high points in the McIlwraith Range.

Conservation status. This species has a small known distribution that is unlikely to be much more extensive. We have no clear understanding of population size and under IUCN criteria regard it as Data Deficient. The large adult size and colourful pattern of this species may make it desirable for the illegal pet trade but it occurs in a remote, protected area that is largely inaccessible.

Comparison with other species ( Table 6). Cyrtodactylus pronarus   is morphologically and genetically most similar to C. adorus   , differing from it genetically by 8.53% sequence divergence on average ( Table 2). It is slightly larger than C. adorus   (SVL males 104.5–126 mm vs 91.5–119 mm, females 113–132.7 mm vs 90.9–123 mm), has more numerous labial scales (supralabial modes 10 vs 9; infralabials 11–13 vs 10–11), the antebrachium lacks tubercles (small tubercles present in C. adorus   ); the dark nape band lacks an anterior vertebral extension (present in C. adorus   ); the dark body bands lack a sharply defined anterior edge, instead blending into the pale bands (sharply defined anterior and posterior margins to dark body bands in C. adorus   ), and the dark bands on the tail are much wider than the pale interspaces (pale tail bands about a third the width of the dark bands, while those of C. adorus   are about half the width of the dark bands). The two species are at present geographically separated by 135 km, but the intervening ranges (northern McIlwraith Range, Table Range, Macrossan Range) and rock outcrops have been poorly surveyed for nocturnal reptiles.

Cyrtodactylus pronarus   is more genetically distinct from C. tuberculatus   , C. mcdonaldi   and C. hoskini   , with average sequence divergences between 16.72% and 17.72% ( Table 2). Morphologically, it differs from C. tuberculatus   , C. mcdonaldi   and C. hoskini   in having many more femoroprecloacal pores and enlarged femoroprecloacal scales (58–66 vs 48 or fewer for both characters). The hindlimbs are immaculate (vs mottled), the caudal dark bands are solid black (vs dark-edged with paler centres) and are much wider than the pale interspaces at the tail base (vs subequal width), and the lips are pale and immaculate, sharply contrasting with the brown face. In comparison to all three species, C. pronarus   has much less developed tubercles, those that are present being smaller and less projecting than the other species, and the tubercles are greatly reduced on the tail, ceasing prior to the distal end of the first dark caudal band. In comparison to C. mcdonaldi   , C. pronarus   also has a continuous row of femoroprecloacal pores in males (vs broken into three segments). Cyrtodactylus pronarus   also lacks vertebral extensions to the dark nape and body bands (present in C. hoskini   ), and has the anterior margins of the dark body bands diffusing into the pale interspaces (vs with dark anterior margins in C. tuberculatus   and C. hoskini   ). It is also much larger than C. hoskini   and C. mcdonaldi   (SVL up to 133 mm vs 112 and 105 mm respectively) and a little larger than C. tuberculatus   (maximum 120 mm).

It further differs from all other Australian Cyrtodactylus   in usually having a small median scale ( Fig. 10 View FIGURE 10 ; probably a fragmented posterior portion of the mental) anteriorly separating the first pair of postmentals (a feature otherwise only seen in one individual of C. adorus   ).

In comparison to C. robustus   , C. pronarus   is smaller (maximum SVL 132 vs 161 mm), has lesser development of dorsal tubercles, has pale lips (vs mottled lips), the anterior margins of the dark body bands blend with the pale bands (vs anterior margins strongly defined by narrow dark then light band), lacks dark speckling on the venter and orange oral and cloacal mucosa, and has fewer dorsal tubercle rows (20–24 vs 24–30), femoroprecloacal pores and enlarged femoroprecloacal scales (58–66 vs 75 or more for both characters), and a generally narrower head (HW/ HL 65–75%, mean = 69% vs 69–84%, mean = 77%).

Natural history. Specimens collected at Peach Creek were living amongst large granite boulders along a drainage line in well-developed rainforest ( Fig. 28 View FIGURE 28 ). Cyrtodactylus   have also been seen in similar habitat at Birthday Mountain. These are presumably also C. pronarus   because of the close proximity of this locality to the McIlwraith Range. 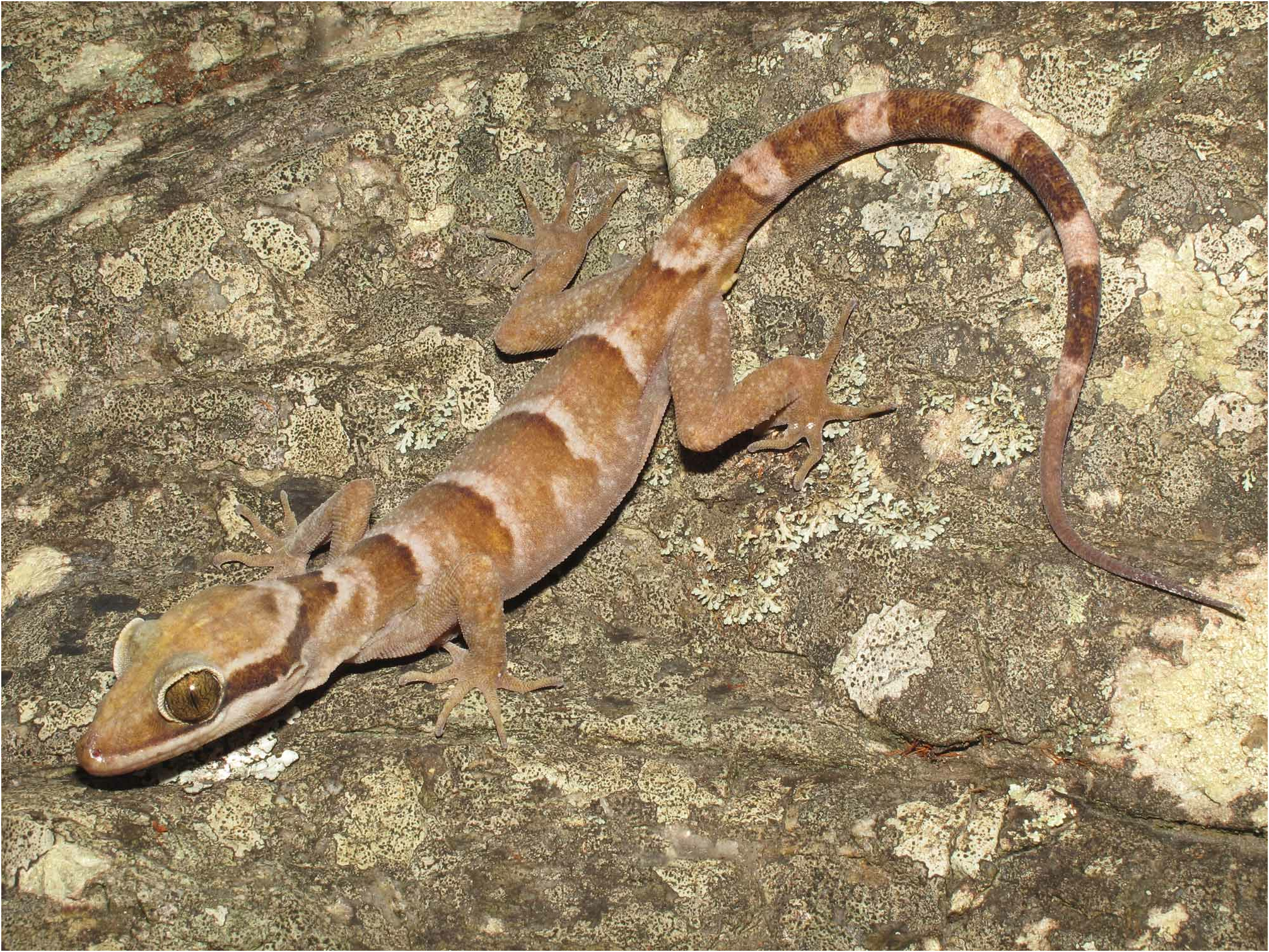