In this paper, we present the first record of this species in Eastern Europe. We identified morphologically freshwater planarians found in the Desna River ( Ukraine) as Girardia tigrina   . The identity of these planarians was subsequently confirmed by molecular analysis of Cytochrome Oxidase I gene (COI) sequences.

Specimens were found in Desna River (vicinity of Pushkari village, Novhorod-Siverskyi district , Chernihiv region, Ukraine, 52°11’08.3”N 33°18’20.8”E, June 2015, coll. A.V. Martynov), with sand and silt at the bottom. Specimens were collected by hand. They were preserved in 96% ethanol and are deposited in the collections of the Laboratory of the Department of Genetics, Microbiology and Statistics, University of Barcelona, Barcelona, Spain, under registration numbers MR0472-01 to MR0472-11. GoogleMaps   Photographs of fixed animals were taken for identification using camera Leica M165 C. Histological anatomical investigations were not undertaken at this time.

The phylogenetic tree ( Fig. 1 View FIGURE 1 ) shows that the sequence obtained in the present work forms a highly supported clade with G. tigrina   , G. dorotocephala   and G. sinensis   , that together constitute the sister group of G. schubarti   . The new sequence hence clearly belongs to the genus Girardia   , it does not show a closest relationship to any of the three species, probably due to the variability of the COI gene. Having only one sequence per species does not allow to have all the variability of the gene within each species represented and, on the other hand, the three species are quite similar for their COI (compare the short branches separating G. sinensis   and G. tigrina   with the ones separating two individuals of S. mediterranea   ). Although G. sinensis   was described from China ( Chen et al. 2015), its close relationship to G. tigrina   and G. dorotocephala   in the phylogenetic tree most probably indicates that it is also a case of a recent introduction in that country coming from North America. Sequences from more individuals of all these species will be needed to molecularly identify the sequence we obtained from the Ukrainian specimen, and also to clarify the relationships among the three species and even their species status. From their external appearance nonetheless, the specimens ( Fig. 2 View FIGURE 2 ) collected in the studied locality fall within type I (sensu Hyman 1939) and class A of Girardia tigrina   according to Ribas et al. (1989). These are fissiparous specimens, externally spotted (numerous small black spots intermingled with bigger white spots) on a brownish background and with a pharynx clearly pigmented. The previous reports on distributions of European populations show that the type I-class A populations are the commonest type found. These fissiparous populations are mixoploids, presenting diploid (2n = 16) and triploid (3n = 24) cells, while the sexuals are always diploids ( Ribas et al. 1989). After studying the populations of the western Mediterranean, Ribas et al. (1989) suggested that several introductions of different stocks, races, or subspecies, living within the area of origin, have occurred since populations in Europe differ from the commonly described fissiparous population both in pigmentation patterns and reproductive biology. Girardia tigrina   has also been recorded from Brazil, Marcus (1946) considered the species to be indigenous in Brazil rather than descended from North America. Kawakatsu and Ponce de León (1990) did not exclude the possibility that the Brazilian populations of the species were introduced from North America. Finally, Sluys et al. (2005) pointed slight anatomical differences between North and South American specimens of G. tigrina and suggested that it might well indicate that the North and South American forms concerned sibling species. Though, they refrained from coining a new species name for the South American animals.

In conclusion, we report the first case of a Girardia species, G. tigrina, in Ukraine and Eastern Europe. Moreover, our phylogenetic results showing the tight relationship between G. tigrina, G. dorotocephala and G. sinensis, together with the existing literature on these species, point to the need of a thorough revision for the whole genus. This situation derives from a poor sampling and systematic study of Girardia in its area of origin, America. As well, whether single, or multiple and independent introductions of Girardia have occurred in Europe is still an open question. These riddles can only be solved by a comprehensive comparison of distantly located European populations to the original lineages from North America. Therefore, more sampling efforts and an in-depth systematic study should be conducted to clarify all these issues. 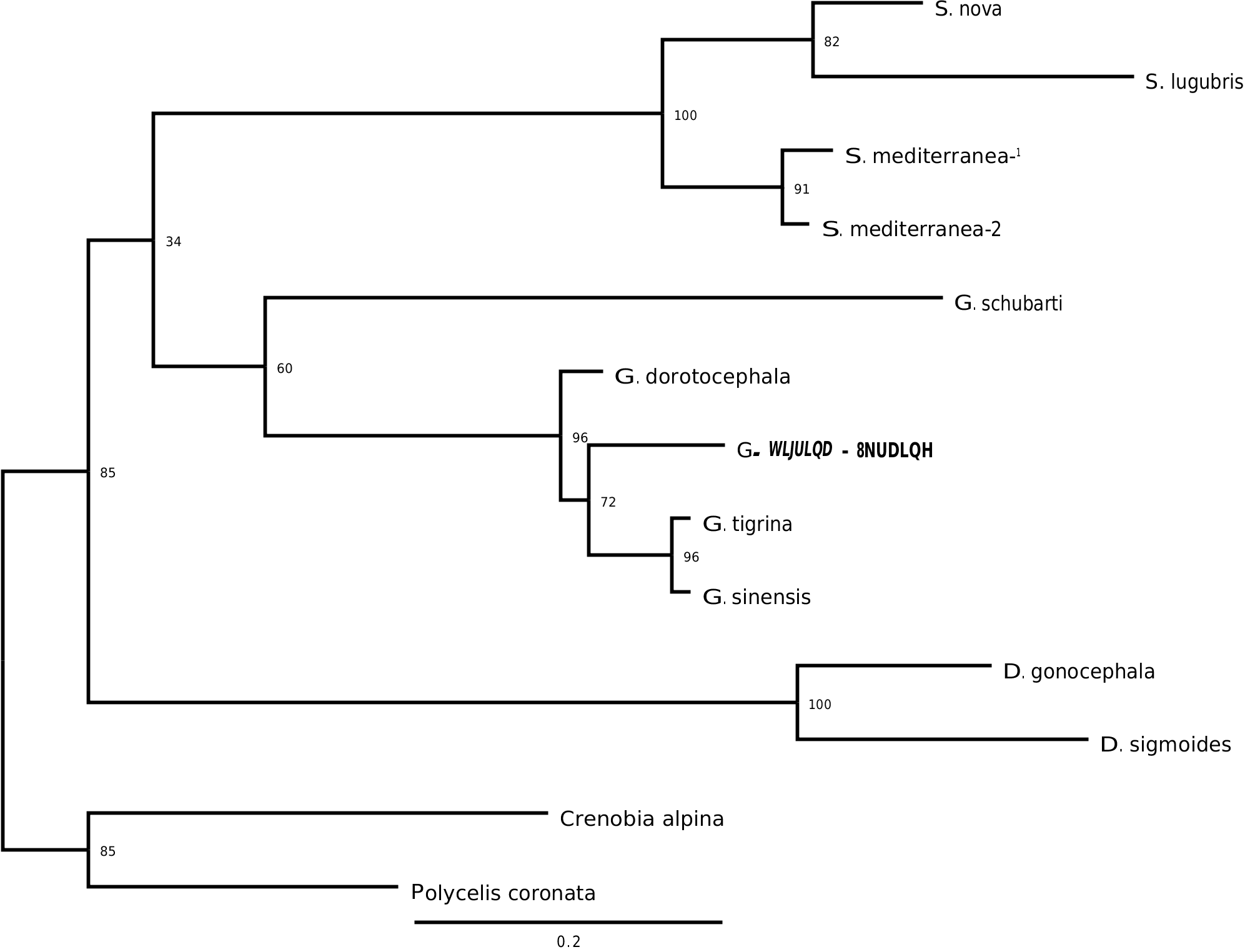