C o m m e n t: The original description of X. varnensis   is based on several type specimens from eastern Bulgaria (environs of Varna and Burgas), that of X. gridellii   carius on a male holotype southwestern Turkey (Marmaris). The type material was studied previously and attributed to X. graecus KRAATZ 1858   ( ASSING 2006a). Xantholinus graecus   calcidicus was described from a male holotype from Athos ( Greece: Chalkidiki) and four male paratypes from Rhodos. This type material was not examined, but the above males from Athos and Kassandra were collected at or near the type locality of X. g. calcidicus. Also, the male from Kassandra was identified by Bordoni as calcidicus, and the males from Chalkidiki are conspecific with the above material from Rhodos. Like X. varnensis   and X. gridellii   carius, X. graecus   calcidicus was recently referred to X. graecus ( ASSING 2007a)   .

Originally described as a subspecies of X. graecus   , X. calcidicus   was regarded as a distinct species by BORDONI (2007a), who states that X. calcidicus   has a larger aedeagus with a larger internal sac and with more distinct distal spines, and that the distribution of this species partly overlaps with that of X. graecus   . According to BORDONI (1982a), X. calcidicus   is widespread from the west coast of central Italy to northwestern and western Turkey, Rhodos, and Crete (including Albania and central Greece). The maps provided by him for both X. graecus   and X. calcidicus   , which were considered subspecies at that time, suggest a considerable - zoogeographically implausible - overlap of the distribu-

A systematic revision of the male primary sexual characters of material previously identified as Xantholinus graecus   sensu lato from various localities in the eastern Mediterranean confirmed that three previously confounded species are present. One of them, X. graecus   , is widespread from Italy and Malta to the Middle East and the Caucasus region. Another species is endemic to Crete and described below. The third species is recorded from eastern Bulgaria, northeastern Greece, the Greek islands Karpathos and Rhodos, and western Turkey, a distribution somewhat resembling that of Medon lydicus BORDONI 1980   (see distribution map in ASSING 2004b). Based on the revised material, the distributions of the two species are strictly para- or allopatric. Since the names X. varnensis   , X. carius   (described in the same work as X. varnensis   ), and X. calcidicus   all refer to the same species, X. varnensis   is designated as the senior synonym, of which X. carius   and X. calcidicus   are junior synonyms. In view of the revised distribution of X. varnensis   (Map 2), the records from central Italy, Albania, Crete, and central Greece (as X. calcidicus   ) by BORDONI (1982) are most probably based on misidentifications.

A reliable differentiation between X. graecus   and X. varnensis   is possible only based on the shape of the male sternite VIII ( X. varnensis   : slightly longer than wide; X. graecus   : wider than long) and the morphology of the aedeagus ( Figs 63-64 View Figs 60-66 , 68 View Figs 67-70 ). In X. varnensis   , it is larger (1.0- 1.2 mm long; X. graecus   : 0.7-0.9 mm; rarely - in material from Naxos and Macedonia - up to 1.0 mm), contains a doubled spine (approximately in the middle; best seen in ventral view) in addition to numerous other spines of various shapes ( X. graecus   : spine in the middle of aedeagus not doubled and with darker and somewhat broader base, in addition to numerous other spines of various shapes), and has additional internal structures of somewhat different shape. For illustrations of the aedeagus of X. graecus   see Figs 60-62 View Figs 60-66 , 67 View Figs 67-70 . The shape of the posterior margin of the male tergite VIII is remarkably variable in both species and consequently of little use for diagnostic purposes. 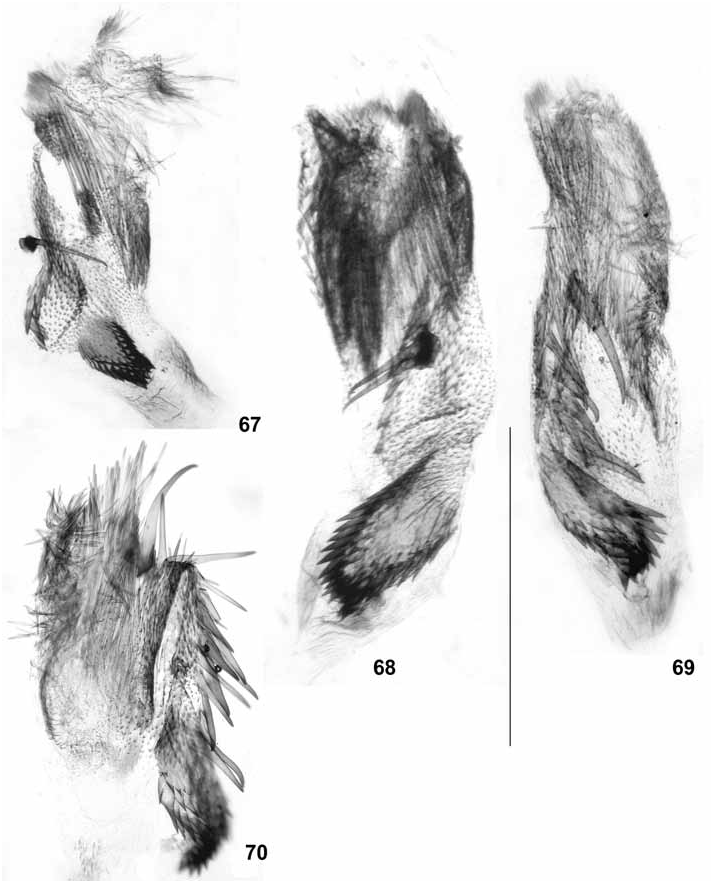