Skeletal characteristics and presence of Symbiodiniaceae   . Papillar tylostyles densely packed in palisade, with tips pointing to exterior. Tylostyles and abundant spirasters irregularly dispersed in papillar canals and choanosome. In situ low levels of fluorescence putatively indicative of photosynthetic symbionts, but no Symbiodiniaceae   later observed within tissue.

Remarks. Purple clionaid sponges visually stand out in the field and have been sampled from a wide range of sites, including:

According to these accounts, there are presently only five valid species of purple clionaids ( Cliona carteri   , Cliona jullieni   , Cliona schmidtii   , Cliona tinctoria   and Spheciospongia purpurea   ). Due to the comparatively distinct spicule characters and growth forms assigned to these names, their identification is not generally considered difficult. Based on spicule and skeleton characters Cliona jullieni   , Cliona tinctoria   and Spheciospongia purpurea   were here readily determined as not being conspecific with the Wakatobi material, even though these species have been described from the Indo-Pacific. All three species possess small epidermal spirasters with irregular spine groups not found in the present samples. Moreover, their tylostyles are significantly more robust, and their mean tylostyle dimensions are considerably larger than those from the Wakatobi specimens (see Table 1). Spheciospongia purpurea   can furthermore develop a massive morphology, which contrasts with the Wakatobi material that was predominantly found in papillate form.

Cliona carteri   initially appeared similar to the purple sponge from Wakatobi, even though the two were found in different oceans. Ridley (1881) described the habit and the colour of the West Atlantic Cliona carteri   as: “Vents scattered, papillary. Colour (in spirit) vivid crimson […] exactly the same as that of dry specimens of [ Cliona schmidtii   …and] almost identical with that of [… Spheciospongia purpurea   ]”. However, as for the Indo-Pacific species above, Cliona carteri   has larger tylostyles of 394 x 15 µm, as well as only one kind of spirasters with a very slim axis (41 x 1 µm; Ridley 1881). We thus also excluded Cliona carteri   from any further comparison.

The spicule morphology of the purple clionaid in the present study was a good match to that of the presently accepted holotype of Cliona schmidtii   ( Ridley, 1881 —footnote on his p. 130). The type status is however erroneously designated to a sponge from the Amirantes that Ridley (1884) described as a “pink to crimson” sponge with papillae of 0.5 – 1.5 mm in diameter and tylostyles of 280 x 8 x 9.5 µm. Using Ridley’s spicule preparation, our own measurements produced a slimmer mean for tylostyle shaft width of the Amirante sponge than what Ridley had published and was in better agreement with the Wakatobi material ( Table 1). We therefore concluded that the Wakatobi sponges were conspecific with Ridley’s (1884) purple sponge from the western Indian Ocean. However, there are significant taxonomic issues, as Ridley (1881, 1884) meant to name Schmidt’s Adriatic purple clionaid. Misled by the “splendid violet colour”, Schmidt (1862, 1870) had regarded Jaspis johnstonii   and Cliona schmidtii sensu   stricto as conspecific (both as Vioa johnstonii   ), arguing that the stellate microsclere in Jaspis   and the spiraster in Cliona   are the opposite extremes of a continuum ( Schmidt 1870, pp. 5-6). Ridley (1881, 1884) recognised Schmidt’s error and aimed to separate the two species by giving the purple clionaid a new name, Cliona schmidtii   . However, by basing the description on the Amirante sponge instead of on the Adriatic one, Ridley yet again combined two distinct species in the new name. And these inhabited two different oceans. Consecutive publications did not question this perceived wide distribution (e.g. Rützler 1973; Rosell & Uriz 2002), and the problem became increasingly convoluted and confusing, e.g. by again using the same name for purple clionaids in the Caribbean (e.g. Pang 1973; Rützler et al. 2014). In order to resolve this tangled taxonomy, it would be necessary to designate a type for Schmidt’s original Adriatic sponge, which would represent Cliona schmidtii sensu   stricto as originally intended by Ridley (1881). Any other purple clionaids that were published as Cliona schmidtii   would then need to be biometrically assessed, and where possible genetically. Once the different species can be recognised and separated, they can be named and distinguished from Cliona schmidtii   . Obviously, this task went far beyond the scope of this paper. Thus, despite finding the Wakatobi purple clionaid to be conspecific with Ridley’s Amirante sponge, we did not re-describe it under a new name, but instead used the name Cliona aff. schmidtii   (see “Material examined” above).

A separation of the perceived species complex of purple clionaids is impossible without a large work effort, because the confusion has built over a long time, and earlier publications did not create morphologic data that can be compared. Previous accounts appear to have often relied on only cursory measurements of very few spicules, which may sometimes produce values that deviate from a mean obtained from a larger sample (see published versus measured values in Table 1). Moreover, not discerning between unfinished and fully formed spicules and not only relying on the latter can lead to a wide discrepancy of determined spicule dimensions between accounts, especially in terms of spicule widths ( Schönberg & Beuck 2007). Furthermore, it has never been properly investigated whether the spirasters in specimens of Cliona cf. schmidtii   represent a size-continuum or size-classes, and if the latter case is true, how many classes need to be assessed. To date spiraster measurements for Cliona cf. schmidtii   were conducted by picking a haphazard selection for slimmer and for thicker spirasters, and in consequence such subsamples may have varied from study to study. We were thus unable to compare spiraster dimensions between publications. 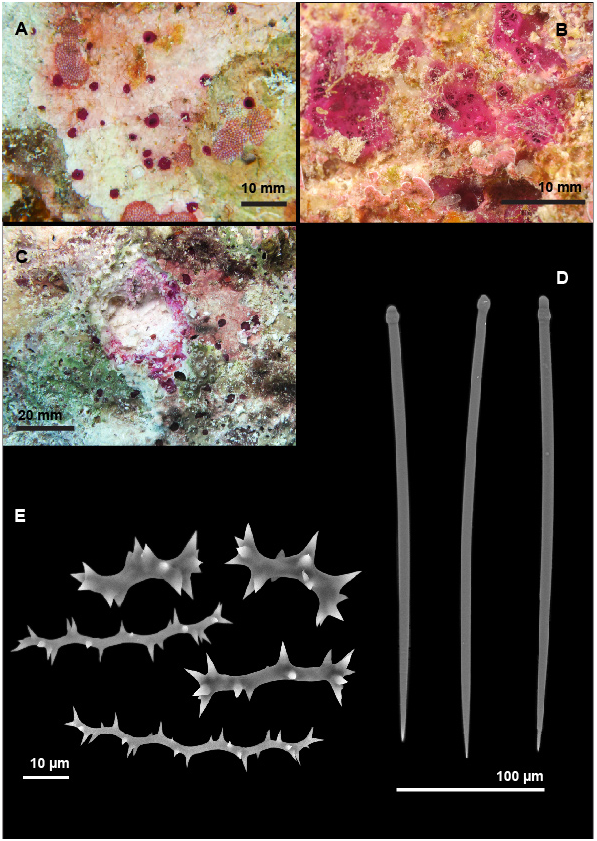