Chelicerae. Black, with an elongated patch of golden setae frontally.

Prosoma. Length 10.0, width 7.7; colouration of carapace and sternum as male, but with less distinct radial pattern on carapace ( Figs 17B, D View FIGURE 17 ).

Remarks. Thorell (1870) listed two adult females in the original species description of T. leuckartii   ; however, only one of the two females in the syntype series is mature and here designated as lectotype to unequivocally fix the species-group name of the taxon. The female is redescribed here based on more recent material, as the lectotype is in poor condition.

McKay (1975) synonymised Lycosa christopheri Simon, 1909   with T. leuckartii   based on the examination of the (p. 320) ‘Holotype female, Hamburg. Zool. Mus. Inst. No. 448’. In contrast, Rack (1961: 37) listed a (translated from German), ‘♀syntype (damaged)’ as her ZMH catalogue no. 448. Her syntype designation may be due to the presence of an immature spider in the same vial. Simon’s (1909) original description of L. christopheri   shows that it was based on more than one specimen, as he gave a size range for the total length of the species, rather than a distinct size for a single specimen. We therefore support Rack’s (1961) assumption of a syntype series of the species consisting of a female and juvenile and here designate the female as lectotype to unequivocally fix the species-group name of this taxon.

We consider the correct original spelling for the species-group name of Leuckart’s wolf spider to be T. leuckartii   rather than T. leuckarti   . This is in accordance with article 33.4 in the fourth edition of the International Code of Zoological Nomenclature ( ICZN 1999), which states the change from - ii to - i is a subsequent incorrect spelling.

Life history and habitat preferences. Habitat preferences of T. leuckartii   are typical for those in the genus Tasmanicosa   , with records from a variety of forest and bushland habitats (Yate, River Red Gum, Black Box, old growth mallee, Casuarina   , Callitris, Acacia   ) to semi-arid grasslands and paddocks. However, this species appears to be more common than other Tasmanicosa   species in floodplains or near permanent to ephemeral waterbodies of varying salinity. Frequent habitat descriptions included samphire, saltbush country, river terrace, alluvial flats and clayey soil with crab holes. This is consistent with McKay’s (1975: 323) habitat description of ‘lateritic gravels, loam, or clay soils, especially on alluvial clay soils near swamps, streams, and on riverbanks’ and Main (1976) detailing ‘dry open woodland and forest with expanses of bare to lightly littered ground; invade dry pasture and crop.’

Burrows of T. leuckartii   are shallow with depth ranging from approximately 60 to 110 mm in a study on South Australian floodplain populations. Burrow depth increased over summer apparently counteracting increasing temperatures, but there was no direct correlation with decreasing soil moisture ( Steggles 2001; Steggles et al. 2003). Burrow fidelity was low in this study, with spiders frequently vacating but also re-occupying empty burrows. Apparently, spiders take advantage of soil fissures in cracking clays that provide ample opportunity as day-time hideouts ( Steggles et al. 2003). Laboratory studies confirmed that an association with burrows was highest in reproductive females ( Steggles et al. 2003). The senior author of this study (VWF) has found T. leuckartii   females building a thin, trapdoor-like lid on their burrow in Quorn (South Australia).

With a similar distribution pattern, the phenology of T. leuckartii   appears to be very similar to that of T. godeffroyi   . Females with eggsac were found predominantly between January and April, with single records from June and October. Consistent with this, most females carrying spiderlings were found in April, but also in January to March and May to June.

In some areas T. leuckartii   is called the hay spider because of its abundance around stooks and bales of cut hay where it is a nuisance to farm workers ( Main 1976).

Recent experiments on the effect of T. leuckartii   as natural control agents for the cotton bollworm, Helicoverpa armigera (Hübner, 1808)   , indicated that these spiders can be effective predators of the cotton bollworm late instars and moths, but also suggested that, under some conditions, the presence of spiders could increase the damage to individual cotton bolls ( Rendon et al. 2016).

Distribution. Tasmanicosa leuckartii   is very common south of approximately 25°S Latitude in New South Wales, South Australia and Western Australia ( Fig. 16 View FIGURE 16 ). Records in southern Victoria and Tasmania are rare and the species has only occasionally been found in Queensland. 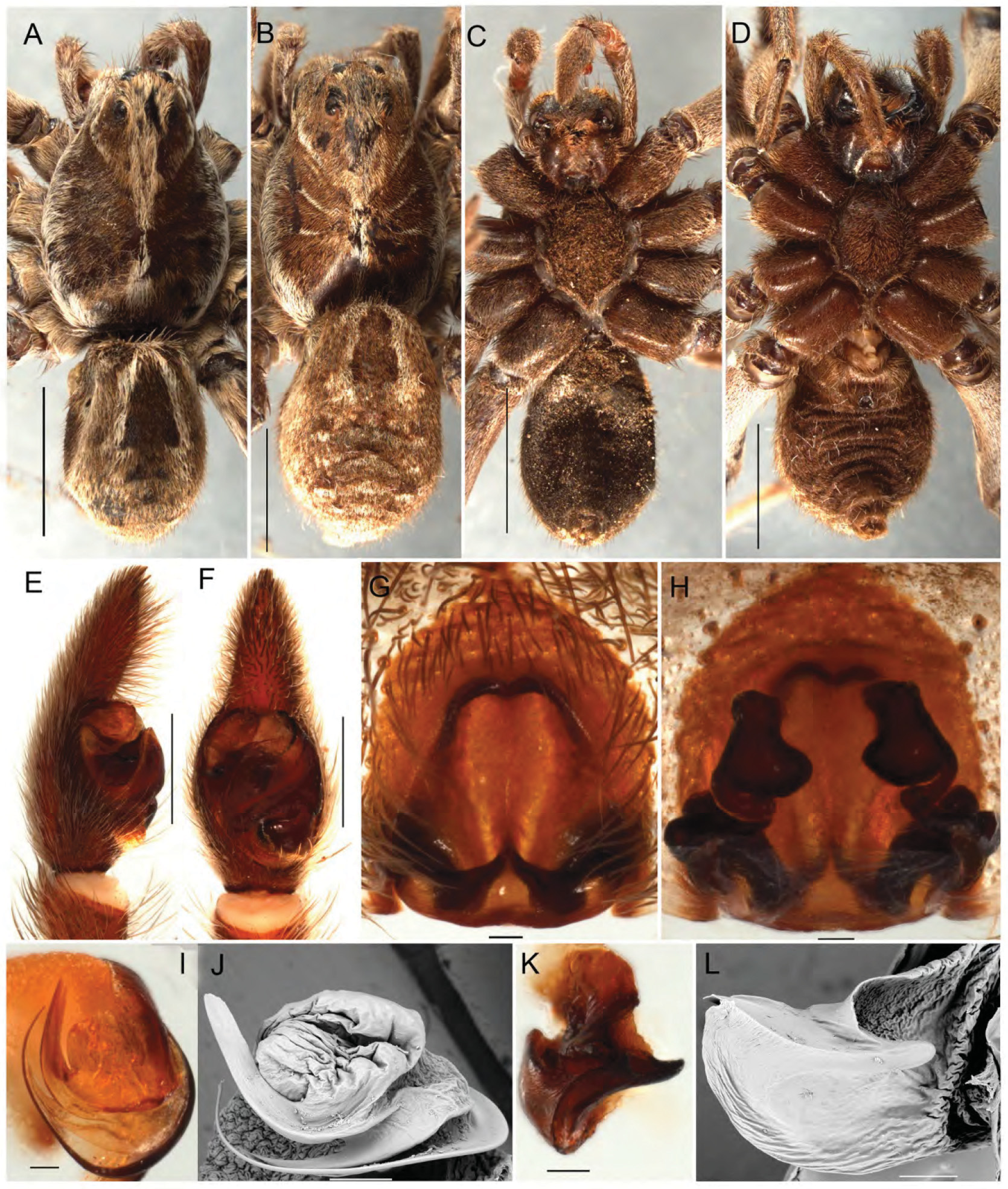 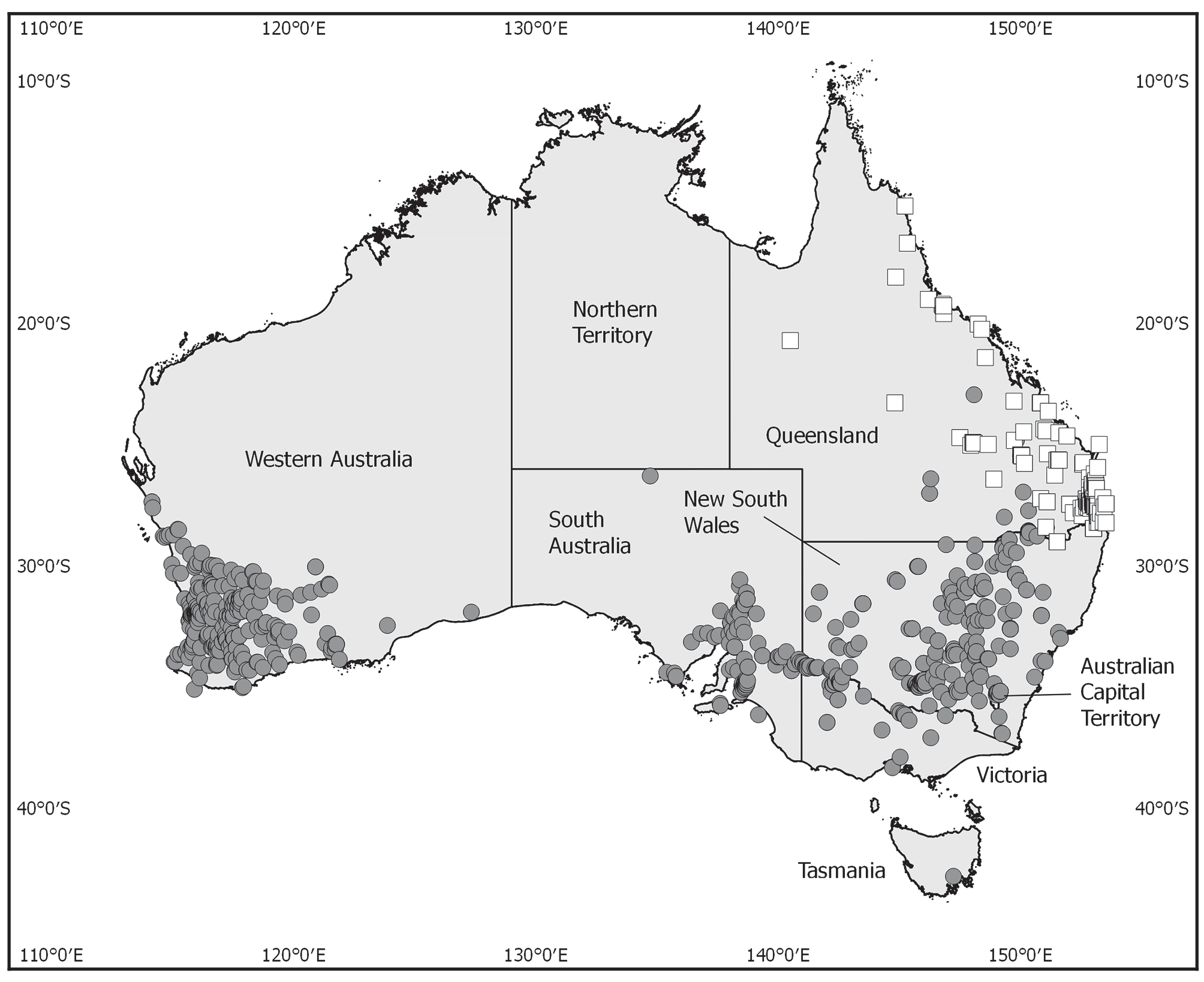 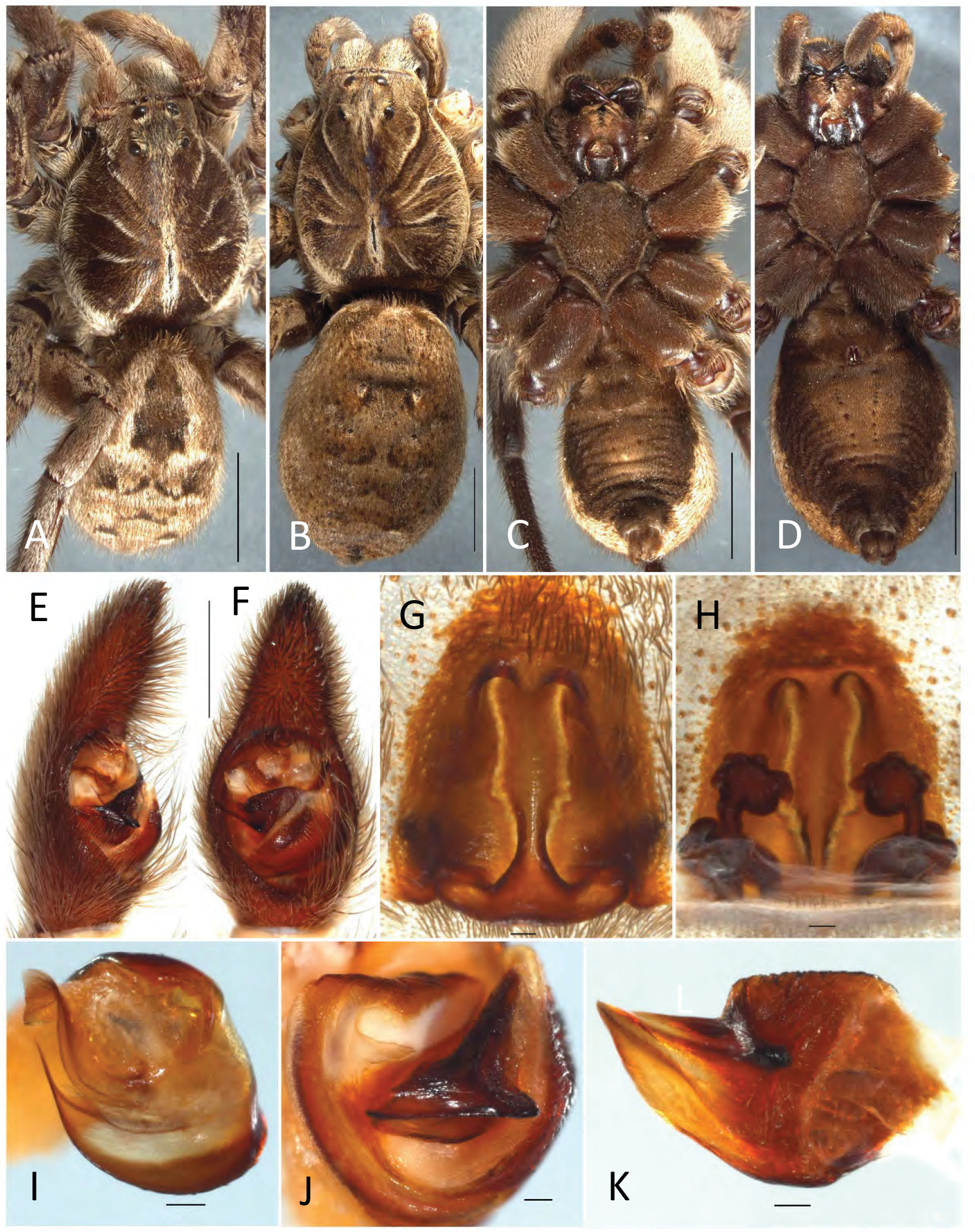