Chris J. Hodgson & Douglas J. Williams, 2016, (Hemiptera: Sternorrhyncha, Coccomorpha) with particular reference to species from the Afrotropical, western Palaearctic and western Oriental Regions, with the revival of Antecerococcus Green and description of a new genus and fifteen new species, and with ten new synonomies, Zootaxa 4091 (1), pp. 1-175: 71-74

Venter. Ventral 8 -shaped pores, each 7.5– 10 x 4.5–5.5 µm, present in a fairly narrow marginal band and sparsely across posterior abdominal segments; also with a few anterior to mouthparts. Simple pores not detected. Small bilocular pores, each about 5 x 4 µm, present medially on head and thorax. Spiracular disc-pores small, each 3–5 µm wide (largest near apex of band) with mainly 5 loculi, in rather sparse narrow bands extending onto dorsum; each band with a total of about 50 pores; posterior band appears to bifurcate as usual but more anterior branch quickly becomes obsolete laterally, posterior branch as above; each apex usually with 2 minute 8 -shaped pores; also with 4 or 5 disc-pores near each antenna. Sclerotized convex closed pores, each 3–5 µm wide, present as follows: with only 1 anterior to anterior spiracle; with a group of 3–5 just posterior to each anterior spiracle; a line of 7 or 8 anterior to posterior spiracle and a line of 2 posterior to posterior spiracle. Multilocular disc-pores, each about 7 µm wide with mainly 10 loculi, distributed as follows: VIII possibly 0; VII 6 or 7 on each side near margin and 2 on each side more medially; and then in lines across segments: VI 5 or 6 submarginally + 23 medially; V 4–8 submarginally + 25–32 medially; IV 5–12 submarginally + 24–43 medially; III 3–7 submarginally + 21–27 medially, II 5 or 6 submarginally and a sparse line of 11 medially; metathorax with 2–6 laterad to each leg stub + 7 medially, and with 2–4 near each mesothoracic leg, and 1 near each anterior spiracle. Tubular ducts similar to those on dorsum but narrower, present throughout. Ventral setae sparse; preanal setae each 63–70 µm long; companion seta short. Leg stubs fairly small. Antennae unsegmented, each 36–40 µm long, without either an apical cone-like point or a setal cavity. Clypeolabral shield 125 µm long. Spiracular peritremes each 26–28 µm wide.

Comment. These specimens were originally identified as A. ornatus   but they are clearly very different. Adult females of A. keralae   are extremely similar to those of A. gabonensis   , differing mainly in the presence of two sizes of larger 8 -shaped pores throughout the dorsum in A. keralae   (largest pores restricted to posterior abdominal segments on A. gabonensis   ). Females of A. keralae   differ also in other more subtle differences (character-states for A. gabonensis   in brackets): (i) many fewer sclerotized convex closed pores ventrally, with none between each antenna and anterior spiracles (present); (ii) only five large 8 -shaped pores on each side of posterior abdominal segments (up to 20 on each side, in two groups); and (iii) each cribriform plate with a broad margin and small area of micropores (narrower margin and with a large area of micropores). Cassava is grown widely in Africa and it is likely that many “sticks” used for planting cassava in India were originally imported from there. Based on this assumption, it could be argued that A. gabonensis   could have been imported with it and therefore that the name A. keralae   should be considered a synonym of A. gabonensis   . However, A. gabonensis   has not been collected from cassava and the above morphological differences are considered sufficiently distinct to justify their separation.

The adult female of A. keralae   can be separated from those of all other Antecerococcus   species (except perhaps A. gabonensis   ) in having the following combination of character-states: (i) dorsum with four sizes of 8 -shaped pores, largest and intermediate-sized pores sparse throughout; (ii) apices of each stigmatic band with two smallest 8 -shaped pores; (iii) lateral margins of posterior abdominal segments each with four or five large 8 -shaped pores; (iv) cribriform plates in a submedial group of four on each side of abdominal segment IV; (v) leg stubs present; (vi) posterior stigmatic bands non-bifurcated; (vii) small convex closed pores present in a sparse line between anterior spiracles and metathorax; (viii) multilocular disc-pores present across all abdominal segments and metathorax, and also mesad to each spiracle, and (ix) antennae without either a cone-like apex or a setal cavity.

In having small convex closed pores near the spiracles, it is also similar to A. theydoni Hall   but on the latter species (i) the convex closed pores tend to be smaller than the quinquelocular disc-pores (about the same size), (ii) the posterior stigmatic pore band is bifurcated, and (iii) the distribution of the 8 -shaped pores on the dorsum is different (see figures).

The adult female of A. keralae   falls within Group A in the key to species of Antecerococcus   , keying out close to A. gabonensis   and A. ovoides   .

Name derivation: keralae   —Latin genetive of the region Kerala, in southern India, of which Thiruvananthapuram is the capital. 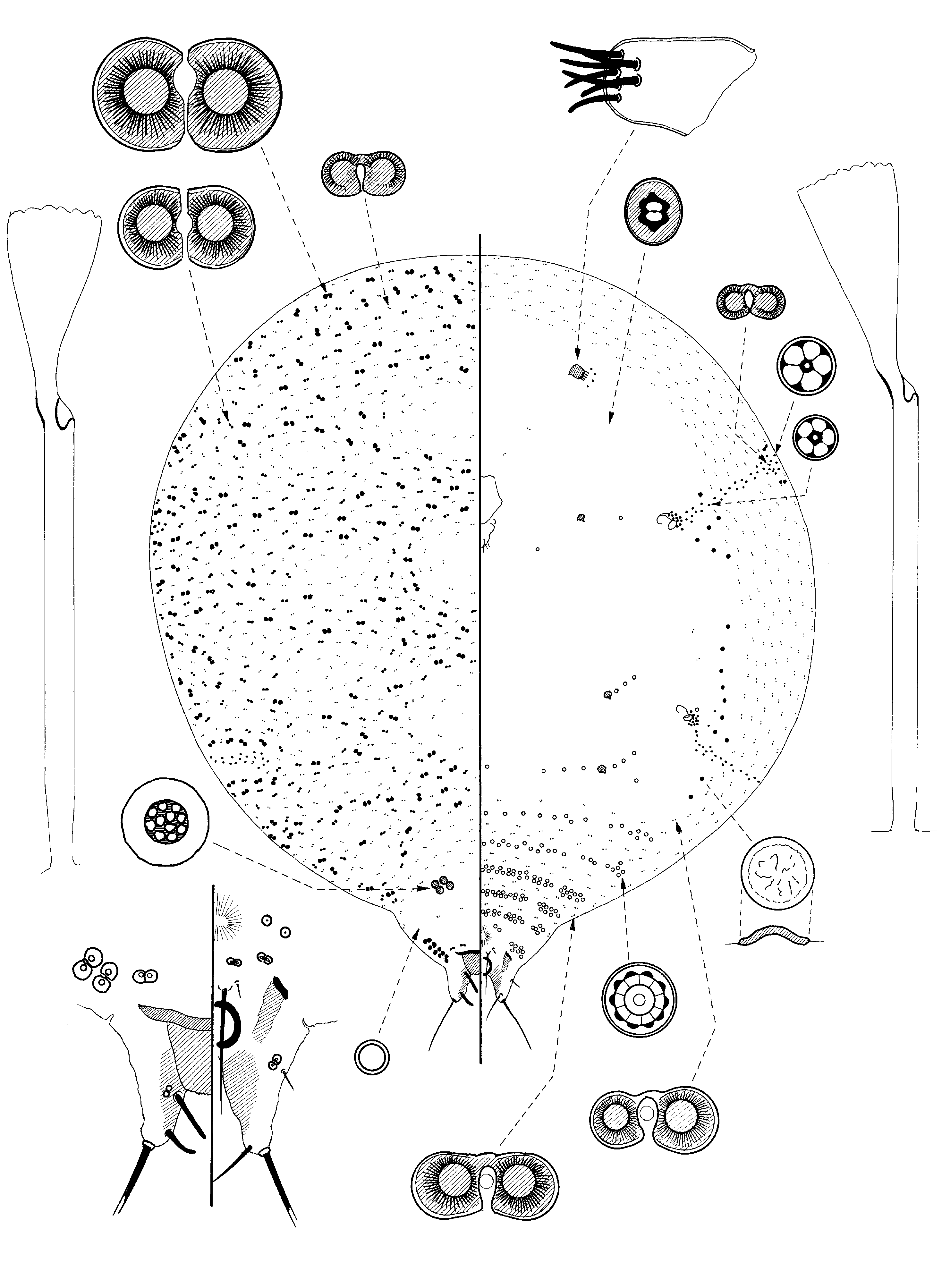