Material examined. Only one individual (MNCN-Sp23-BV14) collected from Stn. 14 ( Table 1 View TABLE 1 , Fig. 1 View FIGURE 1 ), a 96–100 m deep, gravel bottom on the deep shelf of the island. The collected individual is herein designated the neotype, given that the previously available holotype specimen was entirely acid-dissolved to obtain a spicule slide. We are reasoning herein (see the Taxonomic remarks section) that type material in which the macroscopic body features and the skeletal arrangement can be evaluated is crucial to recognize the distinct nature of the monotypic genus Rhabodobaris within the family Bubaridae and, therefore, to support the nomenclatorial restitution of the genus. These "exceptional circumstances" strongly advice the neotype designation to preserve the stability of the nomenclature, following article 75 of the International Code of Zoological Nomenclature .

Macroscopic description. Stalked, flabellate sponge ( Fig. 11A–B View FIGURE 11 ), with a thin lamina measuring 15 mm long x 25 mm wide x 1 mm thick; the stalk, somewhat compressed, measures 7 mm in length x 2.5 mm in wideness. There are 3 and 4 reinforcement ribs at each side of the lamina ( Fig. 11A–B View FIGURE 11 ), making the lamina poorly flexible. There are no aquiferous openings discernible to the naked eye. The surface of the lamina is markedly hispid, with long spicules protruding uniformly at moderated density. The stalk is less hispid. The color of the alcoholpreserved specimen is creamy white.

The rhabdostyles, the oxeas and the strongyles have "acanthose versions", which usually are slightly smaller and less abundant than their respective smooth counterparts. Acanthorhabdostyles measure 125–187 x 6–11 µm and show from scarce to abundant small spines, equally or unequally distributed along the spicule and not necessarily confined to one of the ends ( Fig. 12D View FIGURE 12 ). Acanthoxeas measure 120–280 x 7–9 µm and show few to abundant spines, often more concentrated towards the ends ( Fig. 12A, F View FIGURE 12 ). In few acanthoxeas, the spines were relatively thick and blunt, becoming a sort of tubercles. Acanthostrongyles measure 129–409 x 5–12 µm, being entirely or partially spiny ( Fig. 12A View FIGURE 12 ). Microscleres are toxiform raphides, occurring in trichodragmata ( Fig. 12A, H View FIGURE 12 ) that measure 22–50 x 10–20 µm.

Distribution and ecology notes. Rare species, only known previously from the holotype ( Pulitzer-Finali 1983), a specimen collected at 121–149 m, off Calvi ( Corse Island, Western Mediterranean). Our Alboranian specimen, collected from a 96–100 m deep, gravel bottom with a very rich associated invertebrate fauna, provides the second record of the species in the Mediterranean.

Taxonomic remarks. The body shape and the spicule complement of the newly collected material matches notably well with the original description of Rhabdobaris implicata by Pulitzer-Finali (1983), who indicated that it was a new "stipitate" genus in the family Bubaridae . The only difference is that acanthostrongyles ( Fig. 12G View FIGURE 12 ) are more abundant than acanthoxeas in the holotype, while it is the opposite in the Alboranian individual.

The genus Rhabdobaris Pulitzer-Finali, 1983 was declared a junior synonym of Cerbaris by Alvarez & Van Soest (2002) on the argument that they both share the occurrence of acanthose diactines in the basal, choanosomal skeleton. However, the features of the newly collected individual of R. implicata make clear that it does not fit the genus diagnosis of Cerbaris provided by Alvarez & Van Soest (2002). Cerbaris , among other traits, is characterized by encrusting sponges, with a choanosomal skeleton consisting of a basal layer of acanthose and smooth diactines and monactines projecting perpendicularly to the substratum. Therefore, the current diagnosis of Cerbaris reflects several major mismatches relative to the features of Rhabdobaris implicata : 1) R. implicata is a stalked, flabellate sponge ( Fig. 11A–B View FIGURE 11 ), rather than an encrusting form; 2) the skeleton is not a basal layer, but consists of a plumoreticulate structure of ascending tracts; 3) it lacks the distinct ceroxas (M-shaped oxeas) of Cerbaris ; 4) Rhabdobaris implicata has acanthostyles in great abundance, a spicule type often missing in Cerbaris . Altogether, the differences in body shape, spicule complement and skeletal organization advice to re-establish the original genus Rhabdobaris erected by Pulitzler-Finali (1983) in the family Bubaridae . Likewise, the existence of Rhabdobaris makes compulsory a modification of the current definition for family Bubaridae , as it is currently defined by Alvarez & Van Soest (2002) only to host sponges with an encrusting growth habit supported by a basal layer of interlacing choanosomal diactines.

A comparison of the spicule complement of our Alboranian specimen to Cerbaris spp. occurring in or near the Western Mediterranean region reveals only vague resemblance to Cerbaris (formerly Bubaropsis ) curvisclera ( Lévi & Vacelet 1958) from Azores and Cerbaris (formerly Rhabdoploca ) curvispiculifer ( Carter 1880), originally described from the Indian Ocean (Gulf of Manaar) and subsequently found in Azores ( Topsent 1904) and Banyuls ( Vacelet 1969). These two latter Cerbaris species are encrusting forms that also lack the plumoreticulate skeleton. In addition, C. curvispiculifer lacks raphides, having a spicule complement that varies across described specimens. For instance, it lacks both smooth and acanthose oxeas in the Indian and North-Atlantic specimens, but not in the Mediterranean material. Cerbaris curvisclera has raphides and smooth oxeas, but lacks any kind of style or acanthostyle. Therefore, R. implicata is clearly distinguishable from these Cerbaris species.

Although the genus Rhabdobaris is herein restituted within the original family in which it was erected, that is Bubaridae , there are concerns that Rhabdobaris could be a raspailiid. Indeed, the body shape, the spicule complement, and the general skeletal organization match better the traits characterizing the family Raspailiidae than those of the family Bubaridae . Nevertheless, Rhabdobaris lacks the hispidating bouquets around the long hispidating styles, which typically characterize most—but not all—raspailiids. Therefore, a definitive family assignation may require further inference of the phylogenetic relationships of Rhabdobaris using molecular markers. 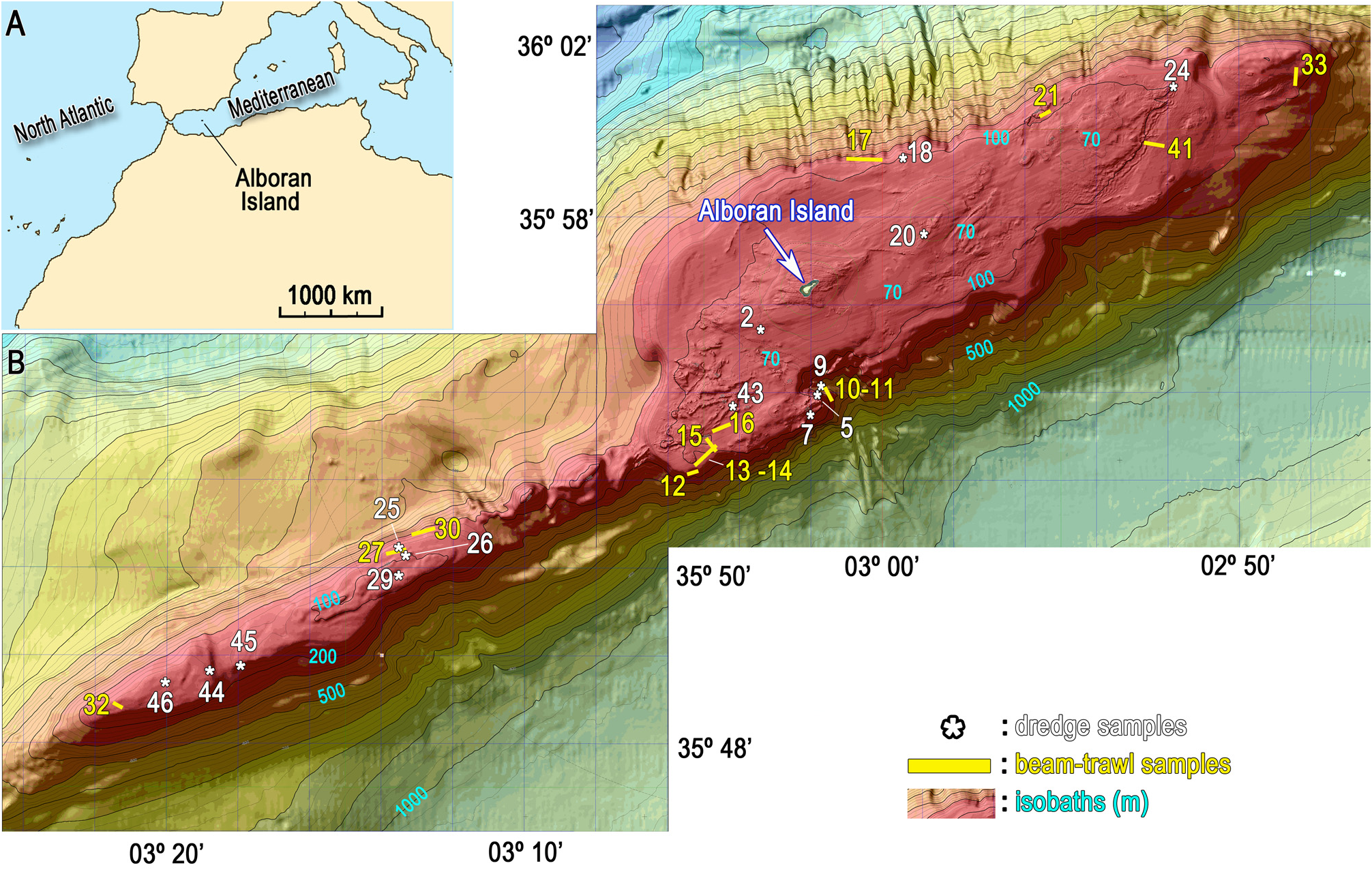 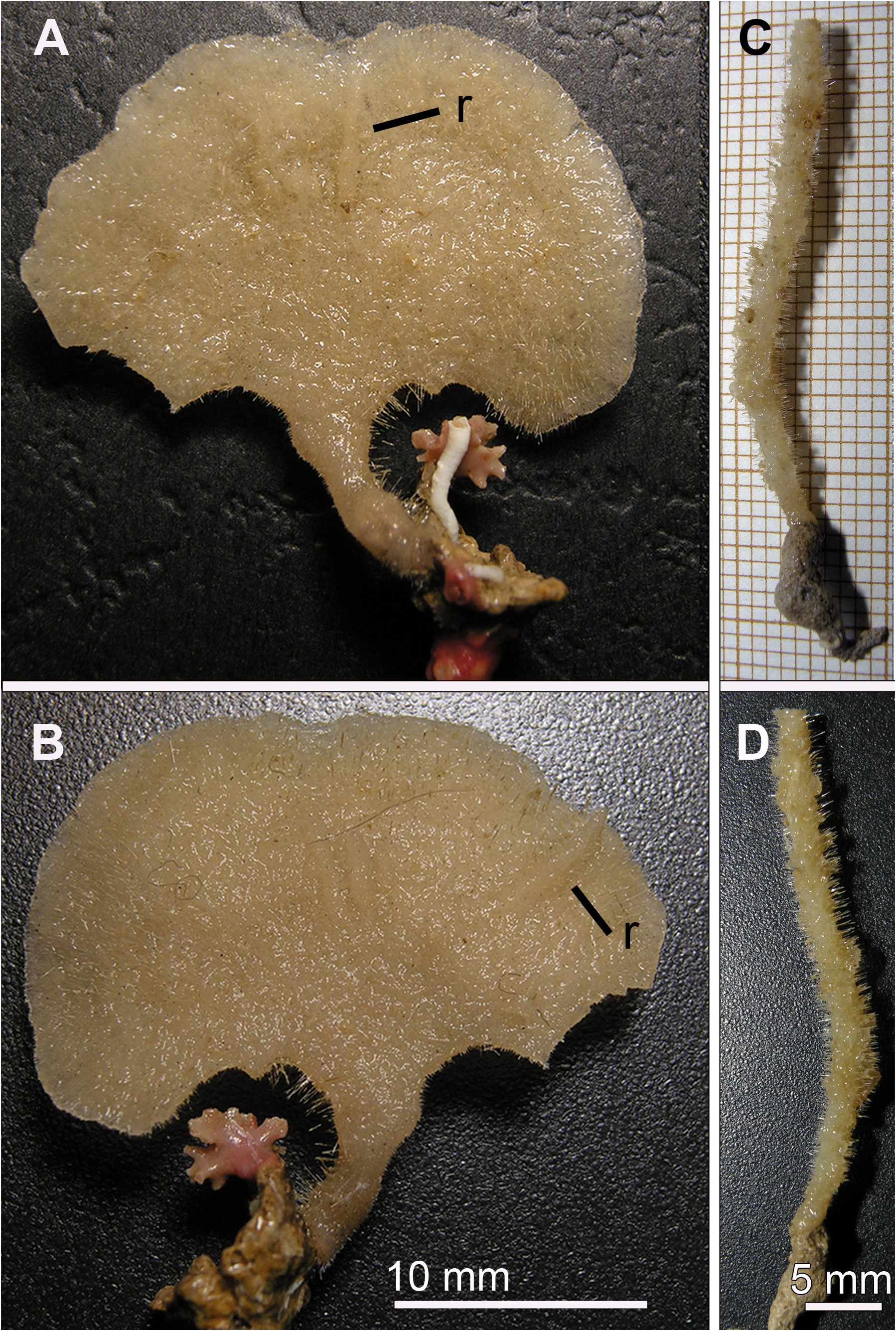 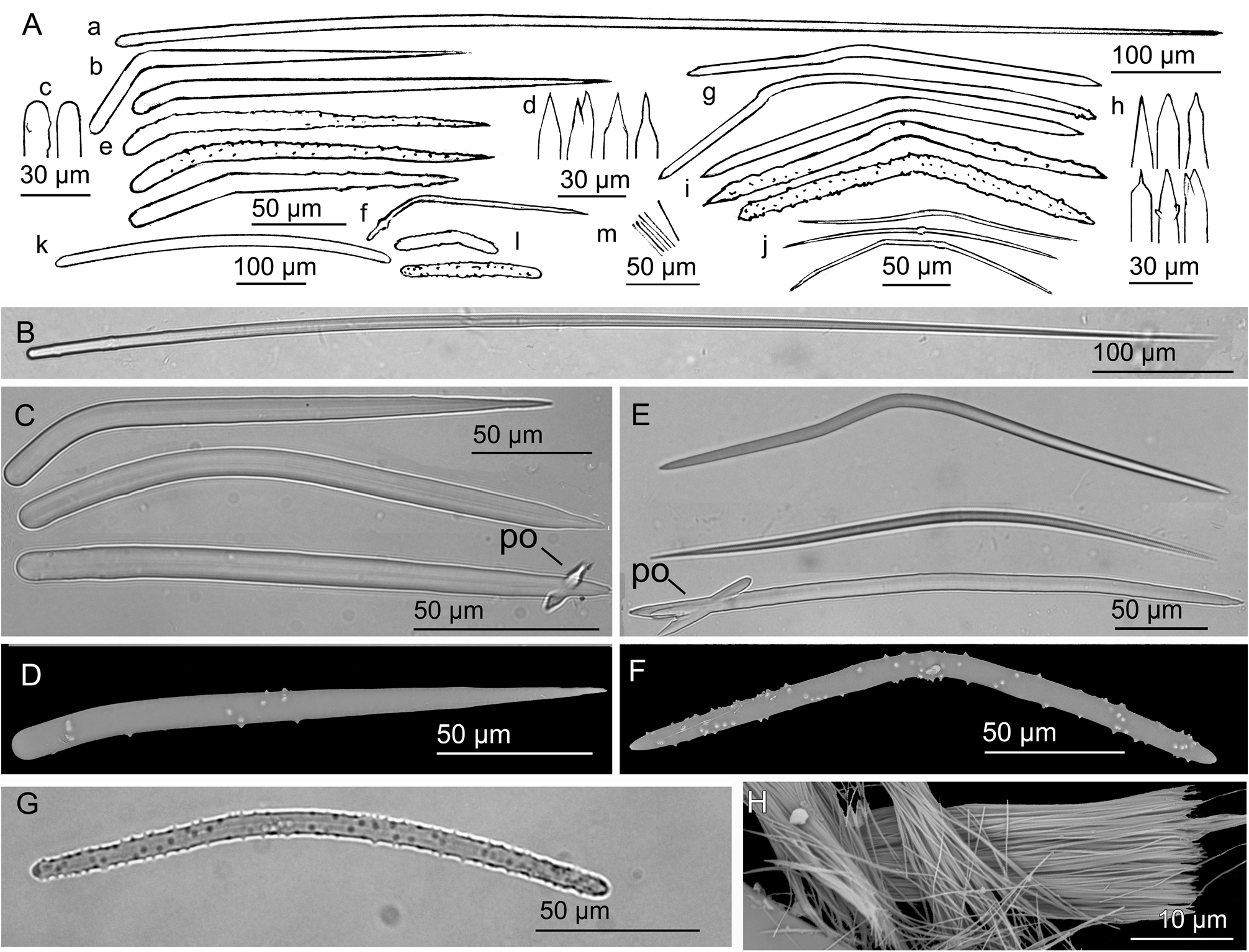