Despite some attempts to clarify the taxonomic status of several populations of species in the Boana punctata   group, the species boundaries, and geographical ranges of most taxa remain controversial. The identification of species in this group has been largely based on external morphology, which can be misleading due to the similar morphology and variable color pattern in many species of the group ( Hoogmoed 1979; Kok 2006; Kok & Kalamandeen 2008). Below, we summarize the complex taxonomic history involving Boana cinerascens   , a species described almost two centuries ago, but for which the species limits and geographical range remain largely uncertain. Boana cinerascens   was originally named as Hyla cinerascens   by Spix (1824), with its description based on specimen(s) deposited at Zoologische Staatssammlung München (ZSM 2498/0 according to Duellman 1977), from “pagum Ecga prope flumen Teffe” (= Tefé, State of Amazonas, Brazil, according to Vanzolini [1981, 1996]). The specimens were collected probably around November and December 1819, during the visit of the Bavarian explorers Johann Baptist Spix and Karl Friedrich Philipp Martius to the region.

In the original description, Spix (1824) does not mention how many specimens he examined, and only one was illustrated ( Spix 1824, plate VIII, figure 4; reproduced in Fig. 1A View FIGURE 1 ). Peters (1872) mentions only one specimen (“badly preserved and discolored”) in his study about the amphibians collected by Spix deposited in the Zoologische Staatssammlung München. However, two syntypes were reported by subsequent authors ( Cochran 1955; Duellman 1977; Glaw & Franzen 2006) —both syntypes are now apparently lost ( Duellman 1977; Glaw & Franzen 2006). It is important to note that Hoogmoed and Gruber (1983) suggested that it is likely that Spix used only one specimen and the second one was included after the ZSM catalogue was produced (between 1872 and early twenty century). Peters (1872) considered Hyla cinerascens   as a synonym of Hyla albomarginata   , justifying that the examined syntype was “a very poorly preserved copy of H. albomarginata Spix   ”. Lutz (1951a; b [1949]), however, considered unlikely that Spix’s species was conspecific with the Atlantic Forest species H. albomarginata   , and therefore treated H. cinerascens   as a distinct species. Furthermore, this synonymy was considered doubtful by several authors such as Duméril and Bibron (1841), Lutz (1951; 1973), Bokermann (1966).

Hyla granosa   was described by Boulenger (1882) based on a series of specimens from scattered localities around Amazonia: Guyana, Demerara Falls (The Natural History Museum – BMNH 1947.2. 12.931), Santarém, Brazil (BMNH 1947.2.12.94–96); Interior of Brazil (BMNH 1947.2.12.97–98); and Ecuador, Canelos (BMNH 1947.2.12.99). Two of these specimens (BMNH 1947.2.12.99 and BMNH 1947.2.12.97) were illustrated by Boulenger (1882, plate XXIV, figures 2 and 3, following Hoogmoed [1979], reproduced here in Fig. 1B and 1C View FIGURE 1 , respectively). In the original description, Boulenger (1882) suggested that males and females might show remarkable differences in color pattern (“males with a few scattered white dots on the head and back; females with a cross-streak between the eyes, a streak from the nostril, and a few spots on the back, forearms, and tibiae, purple; upper eyelid rose, as in H. punctata   ”). However, no sympatric specimens of the opposite sex were available in his sample. Lutz (1951a;b [1949]) noted that Boulenger’s type series may have more than one form under the same name—she suggested, that the plain form could be called Hyla inornata   and, by implication, that the patterned form should retain

1 Numbers represent the current collection numbers at the BMNH. the name Hyla granosa   . However, this proposal was an informal suggestion without nomenclatural value and no type specimen was designated for Hyla inornata   . Although it could be inferred that she was referring to the animal illustrated in Boulenger (1882: BMNH 1947.2.12.99), we agree with Duellman (1974) that the name Hyla inornata Lutz, 1951   [1949] must be considered a nomen nudum, because there is no designed type for this name.

Hyla ornatissima   was named and described by Noble (1923), based on a single female specimen from Meamu, Mazaruni R., British Guiana, currently Guyana (AMNH 13491). Lutz (1951a; b [1949]) suggested H. ornatissima   might be identical to H. granosa   , but did not formally synonymize them.

Hyla granosa gracilis   was named and described by Melin (1941) based on two male syntypes from Rio Uaupés (north of Ipanoré), Brazil (both specimens catalogued with same number in Naturhistoriska Museet, Göteborg, Sweden, NHMG 467) ( Fig. 2 View FIGURE 2 ), according to Duellman (1974).

Duellman (1974), in his taxonomic reassessment of several Neotropical hylids, once again reviewed the status of the taxa mentioned above. He designated one of the syntypes of H. granosa   as lectotype (BMNH 1947.2.12.99, from Canelos, Pastaza, Ecuador). It is worth mentioning that Cochran & Goin (1970) restricted the type-locality of Hyla granosa   to Demerara Falls, Guyana, without indicating a lectotype. Only one of Boulenger’s specimens was collected at that locality (BMNH 1947.2.12.93). However, Duellman (1974: 8) explicitly designated a lectotype (BMNH 1947.2.12.99), and consequently, the type-locality of H. granosa   became Canelos, Ecuador. When reassessing the status of H. granosa gracilis, Duellman (1974)   concurred with Rivero (1972) that the taxon was to be considered a synonym of H. granosa   , and consequently neither a synonym of H. punctata   (as suggested by Cochran & Goin 1970), nor a subspecies of H. granosa   (as suggested by Lutz 1951a; b [1949], 1973).

The status of most species was reviewed again by Hoogmoed (1979). Based on morphological, ecological, and acoustical evidence, he removed Hyla ornatissima   from the synonymy of Hyla granosa   . Hoogmoed (1979) did not comment on the status of H. cinerascens   . A few years later, Hoogmoed and Gruber (1983), in a systematic review of Spix’s material, considered that Hyla granosa Boulenger, 1882   was a junior synonym of Hyla cinerascens Spix, 1824   but made the following remark: “As H. granosa   is a well-established name ( Hoogmoed, 1979) it seems undesirable to replace it by a name which for a long time has been considered a synonym of a superficially similar species and of which the type has been destroyed. We therefore will propose the International Commission on Zoological Nomenclature to suppress H. cinerascens Spix, 1824   in order to stabilize the nomenclature of this taxon”. The formal petition to ICZN was never submitted and the name Hyla granosa   continued to be widely used for another 20 years, until Barrio-Amorós (2004) and Frost et al. (2006) used the name Hyla cinerascens   for the taxon until then known as H. granosa   . The use of H. cinerascens   was widely followed and the name has become the standard for what was once known as H. granosa   .

The status of the species treated above has remained unchanged, except for generic reallocations. Faivovich et al. (2005) placed them in Hypsiboas   , and Dubois (2017) corrected the generic name to Boana   (by implication). As per our interpretation of historical literature, Boana cinerascens ( Spix, 1824)   is a valid name, and Boana granosa (Boulenger, 1882)   and Boana granosa gracilis ( Melin, 1941)   are junior synonyms of it.

Three recent expeditions to the Rio Negro and Rio Solimões regions (State of Amazonas, Brazil) of Amazonia yielded important material that allowed us to revisit the taxonomic issues mentioned above. 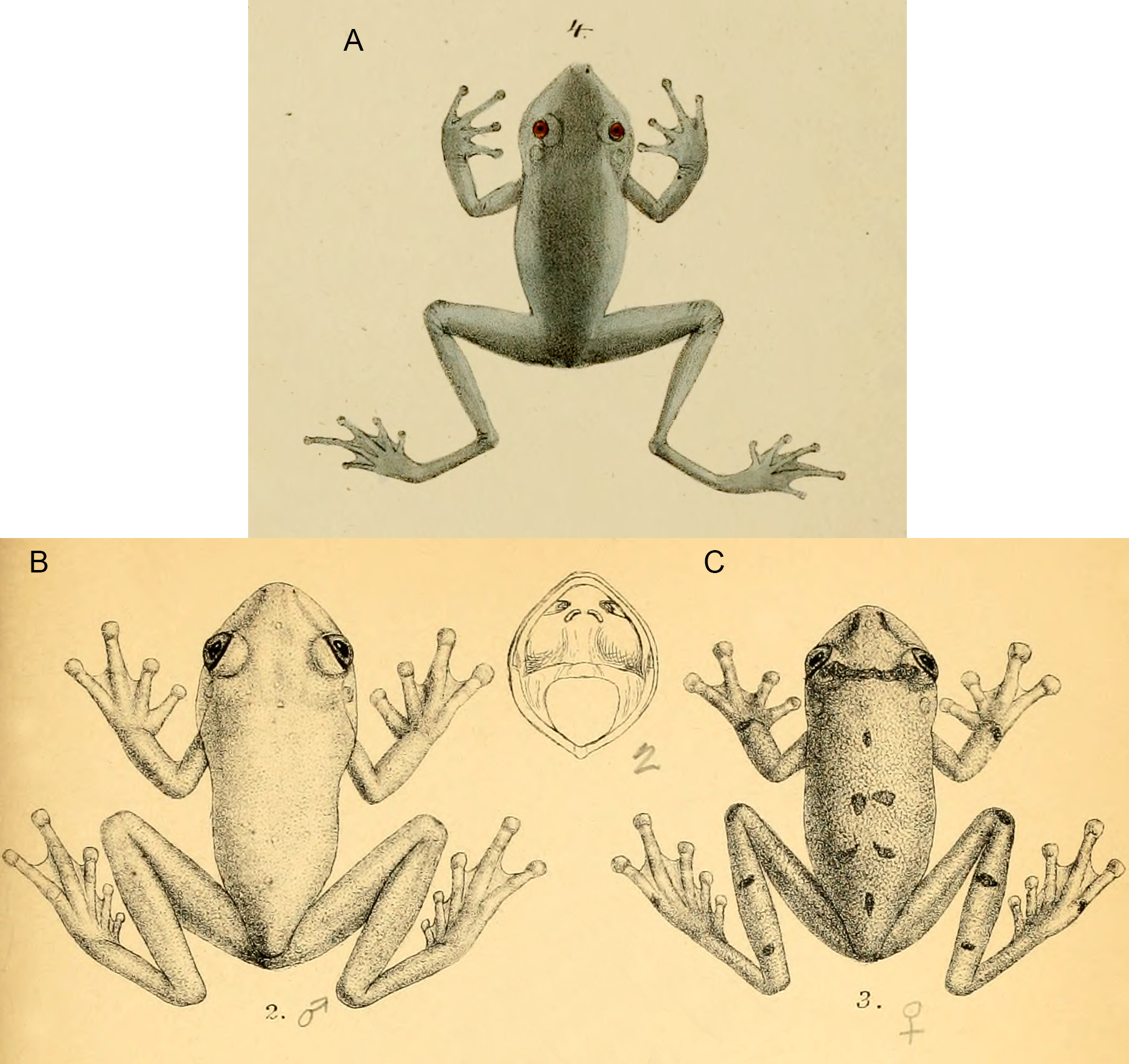 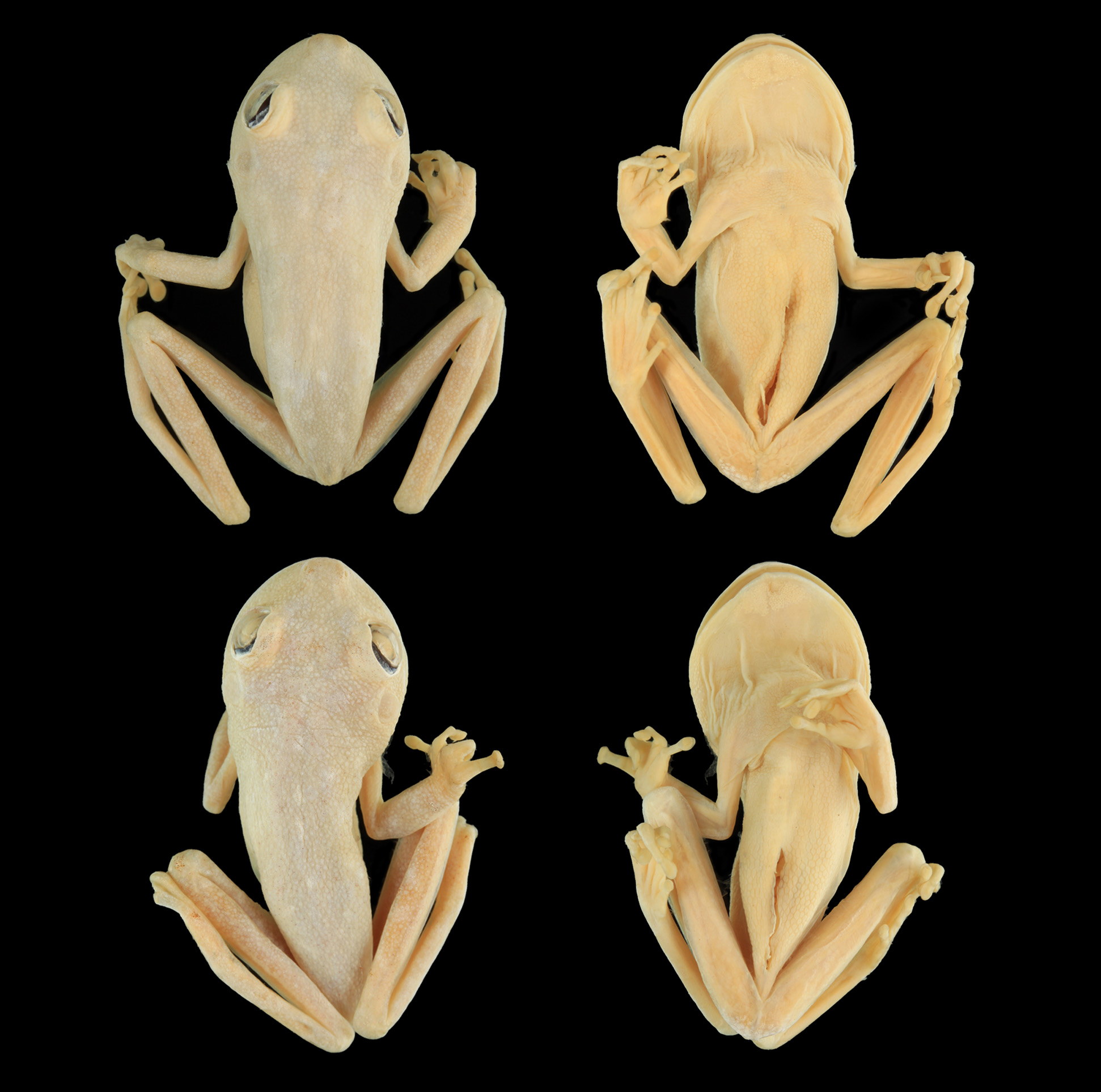