Variations. The CW: CL ratio was similar between sexes; the mean ratio was slightly higher in females than in males (2.15 vs. 2.05). Chelae of the largest female (CW 7.0) are clearly unequal perhaps due to a process of regeneration, in addition, the occlusal margin of the dactyl in the large chela is more concave than in the rest of specimens, forming a gape with the pollex ( Fig. 2I View FIGURE 2 ). On the other hand, the pattern of number and shape of teeth in the cutting edges of the largest chela is the same as in the other specimens. Without considering abdominal differences between males and females, no other remarkable variations were observed between sexes. The presence of the GP was observed in all the males; that in the juvenile male (CW 2.1) appears much reduced.

Remarks. Although a genetic analysis of G. nataliae   n. spec. could not be done, we include it into the genus Glassella   on the basis of its morphological characteristics which clearly agree with the modified diagnosis for the genus Glassella   made by Palacios Theil & Felder (2020) and slightly amended by Felder & Palacios Theil (2020) and that currently include four species previously included within the genus Pinnixa   , the three species that had been placed in the genus Laminapinnixa   and three new species recently described by Felder & Palacios Theil (2020) from the coasts of Florida, United States. Glassella nataliae   n. spec. is very similar to G. miamiensis   , an Atlantic species, by the general shape of the carapace, abdomen, pereopods and the third maxilliped, but they can be differentiated because the anterolateral carapaces ridges in the new species are smooth, not granulated, the male telson is rounded, not flattened and the GP has subparallel lateral margins and two distal lobes instead of convex margins and four distal lobes. Glassella faxoni   differs from G. nataliae   n. spec. by the shape of its chelae that forms a gape, and by having a triangular (vs. rounded) telson. In accordance with the description of G. vanderhorsti   ( Rathbun, 1924, Plate III, figs. 7, 8, text-figs. 1 and 2), this species can be distinguished from G. nataliae   n. spec. because the former has a tapered pleon, with undulating margins and an oblong telson, while in the new species the pleon has its narrowest part in the middle of the fused segments 4–6 with the last somite wider than preceding with no markedly undulating margins and the telson is more rounded. On the other hand, according to the figures provided by McDermott (2014) and Palacios Theil & Felder (2020), the new species can be distinguished from G. vanderhorsti   because in the latter the GP is almost rounded distally with sharp lateral projections, while the GP of the new species is distally bilobed, with straight lateral margins.

The new species can be distinguished from G. martini Felder & Palacios Theil, 2020   and G. taylori Felder & Palacios Theil, 2020   by the male pleon outline. Male pleon of G. martini   has an inverted chalice outiline and that of G. taylori   is broadly triangular while the male pleon of G. nataliae   n. spec. has an hourglass outline. On the other hand, G. martini   has a carapace covered with fine granules and the anterolateral ridge of the carapace is slightly elevated while G. nataliae   n. spec. has a dorsally glabrous carapace and a raised anterolateral ridge, not granulated. On the other hand, in G. taylori   the anterolateral ridge of the carapace is granulated and the propodus and dactylus of the third maxilliped are short (vs. long in the new species). Glassella chaneyi Felder & Palacios Theil   has a male pleon with hourglass outline, similar to that of the new species but in the former the GP is short, about 0.5 the length of the gonopod, and distally bifid while the new species has a rectangular and distally bilobed GP of about 3/4 the length of the gonopod. On the other hand, G. chaneyi   has an anterolateral ridge of carapace marked by closely set tubercles and its chelae are weak, laterally compressed with fingers narrowly elongated and the new species has non slender chelae and the anterolateral ridge is elevated, non-tuberculate.

In this study no specimens of G. abbotti   , (until now the only species of Glassella   in the eastern Pacific) could be reviewed, and there is no a published description of its pleon or pereopods 2-5, but, according to the original description made by Glassell (1935: 13) and comments on the male GP in Palacios Theil & Felder (2020: 96), it can be inferred that the new species is different from G. abbotti   because the former has a bare dorsum of carapace, while in G. abbotti   the dorsum of carapace is pubescent towards the external margins. On the other hand, the male GP of G. nataliae   is clearly rectangular and distally bilobed. While there is not much information about the GP of G. abbotti, Palacios Theil and Felder (2020)   pointed out “we can state that a clear ramification of the male gonopodal plate is present in the eastern Pacific species G. abbotti   ”, which indicates that G. nataliae   and G. abbotti   have different gonopodal plates.

There are a number of species distributed in the eastern Pacific and included in the genus Pinnixa   that could also conform to the general morphology of the genus Glassella   . These are P. transversalis H. Milne Edwards & Lucas, 1844   , P. pembertoni Glassell, 1935   , P. bahamondei Garth, 1957   , P. darwini, Garth, 1960   and P. hendrickxi Salgado-Barragán, 2015   . These species also share the fact that they all have the male pleon with at least three of the abdominal somites completely or partially fused as defined for the genus Indopinixa and also observed in most of the species of Glassella   (see: Naruse & Maenosono, 2012; Salgado-Barragán, 2015).

When comparing with the species mentioned above, G. nataliae   n. spec. can be easily distinguished from P. transversalis   because the latter has a sharp transversal ridge on the posterior region of the carapace that is absent in the new species. In P. bahamondei   and P. transversalis   , the posterior margin of the merus and propodus of walking legs 3 and 4 are spiny, on the other hand their male pleon is wider at abdominal somite 3 and becomes narrower towards the end of somite 6, with a wider telson than segment 6, while in the new species posterior margin of the merus and propodus of walking legs 3 and 4 are, at most, granulated on the dorso-distal portion of the propodus and the abdominal segment 6 is wider than 5 and followed by a wider telson, giving the pleon an “hourglass” outline. The new species can also be separated from P. pembertoni   because this species has granulated anterolateral ridges on carapace (vs. smooth ones in G. nataliae   n. spec.) and a male abdomen with segment 6 narrower than segments 4 and 5, in the same way as is indicated for P. transversalis   and P. bahamondei   while in G. nataliae   n. spec. it has an “hourglass” outline. Pinnixa darwini   is easily distinguished from the new species because it has the chelae with arched dactyli, forming a gape with the pollex (not gaping in the new species) and because its male telson is triangular instead of rounded in G. nataliae   n. spec. When comparing the new species with P. hendrickxi   , the exopod of the third maxillped in P. hendrickxi   is short, curved at the tip and non-segmented and the distal process of male first gonopod is thin and relatively large, about one third of the total gonopod length while in G. nataliae   the exopod of the third maxilliped has a slender flagellum and the distal process of the male first gonopod is stout and short, of approximately one fourth of the gonopod length.

Among the diagnostic characteristics of the genus Glassella, Palacios Theil and Felder (2020)   pointed out that “the nine species in the Glassella-Indopinnixa complex shared… relatively stout legs with dactyli shorter than the propodi (especially for P4 and P5…)”. This characteristic is not fully met by specimens of G. nataliae   n. spec., since their pereopods 2 and 3 are slender and clearly have a dactylus longer than the propodus. Not so for pereopods 4 and 5. This characteristic seems to be shared by G. miamiensis   , since, although none of us were able to review specimens of that species, the photographs provided by McDermott ( McDermott, 2014, Figs. 3A, B View FIGURE 3 ) show two specimens whose pereopods 2 and 3 appear to have a dactylus as long as or longer than the propodus. Unfortunately, the angle of the photographs does not help to confirm this. In any case, we consider that the inclusion of the new species within Glassella   is still valid and that this variation could be an adaptation due to its lifestyle inside galleries of other invertebrates.

Habitat. Not well defined, but apparently associated with species of Neotrypaea   spp. In muddy-sand lagoon bottoms.

Etymology. The species is named in honor of the late mother of the first author (Natalia Barragán). 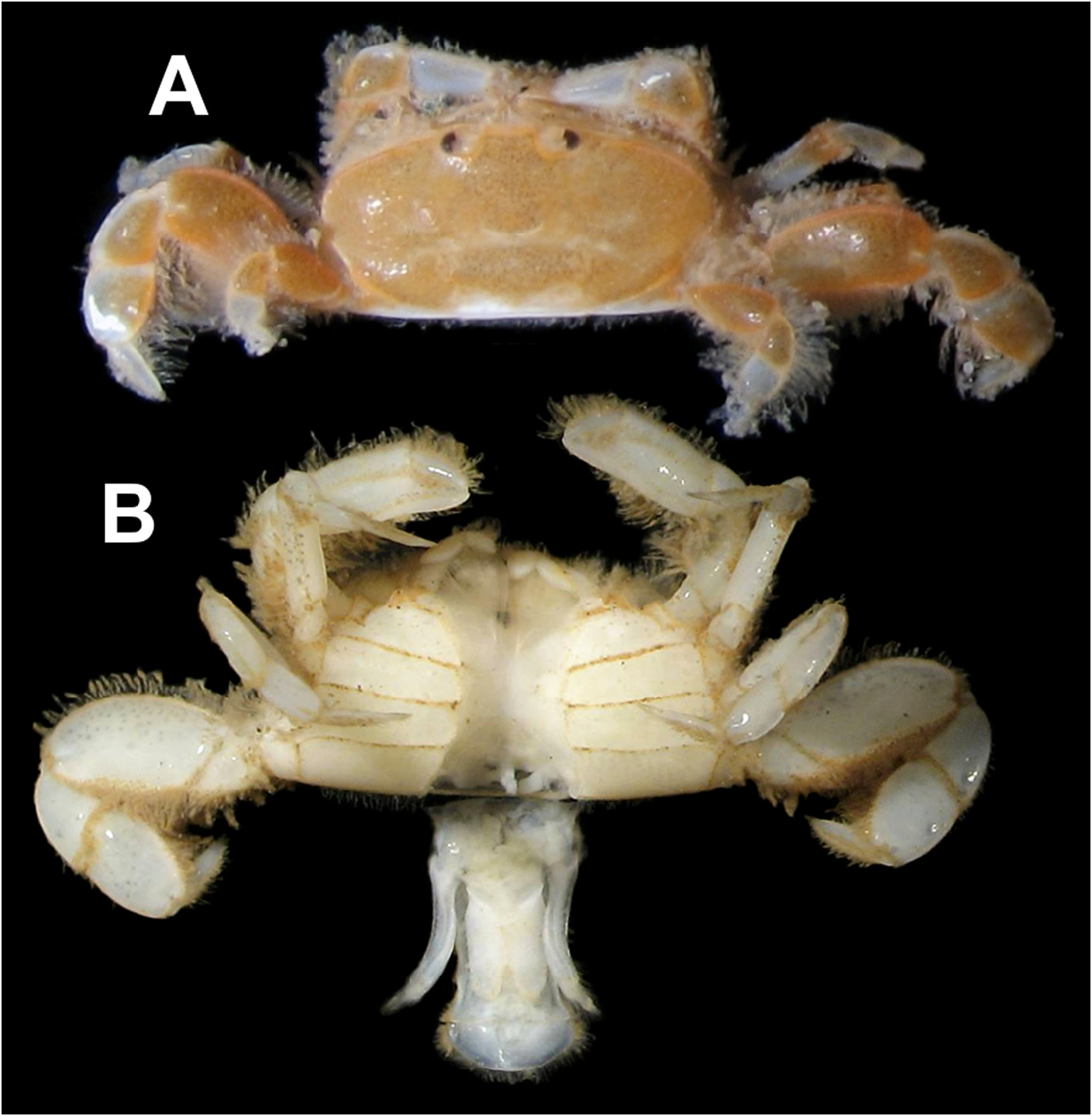 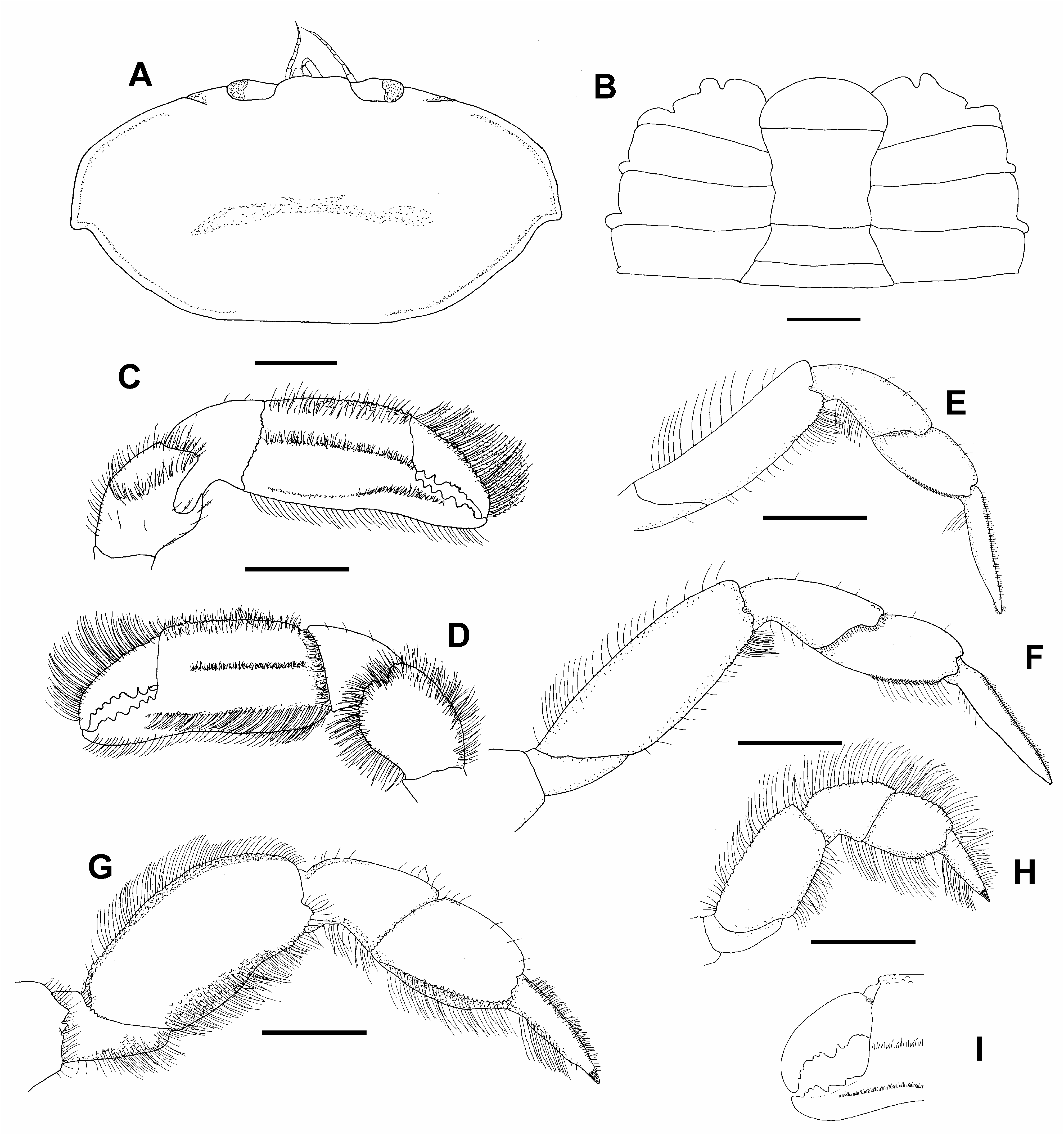 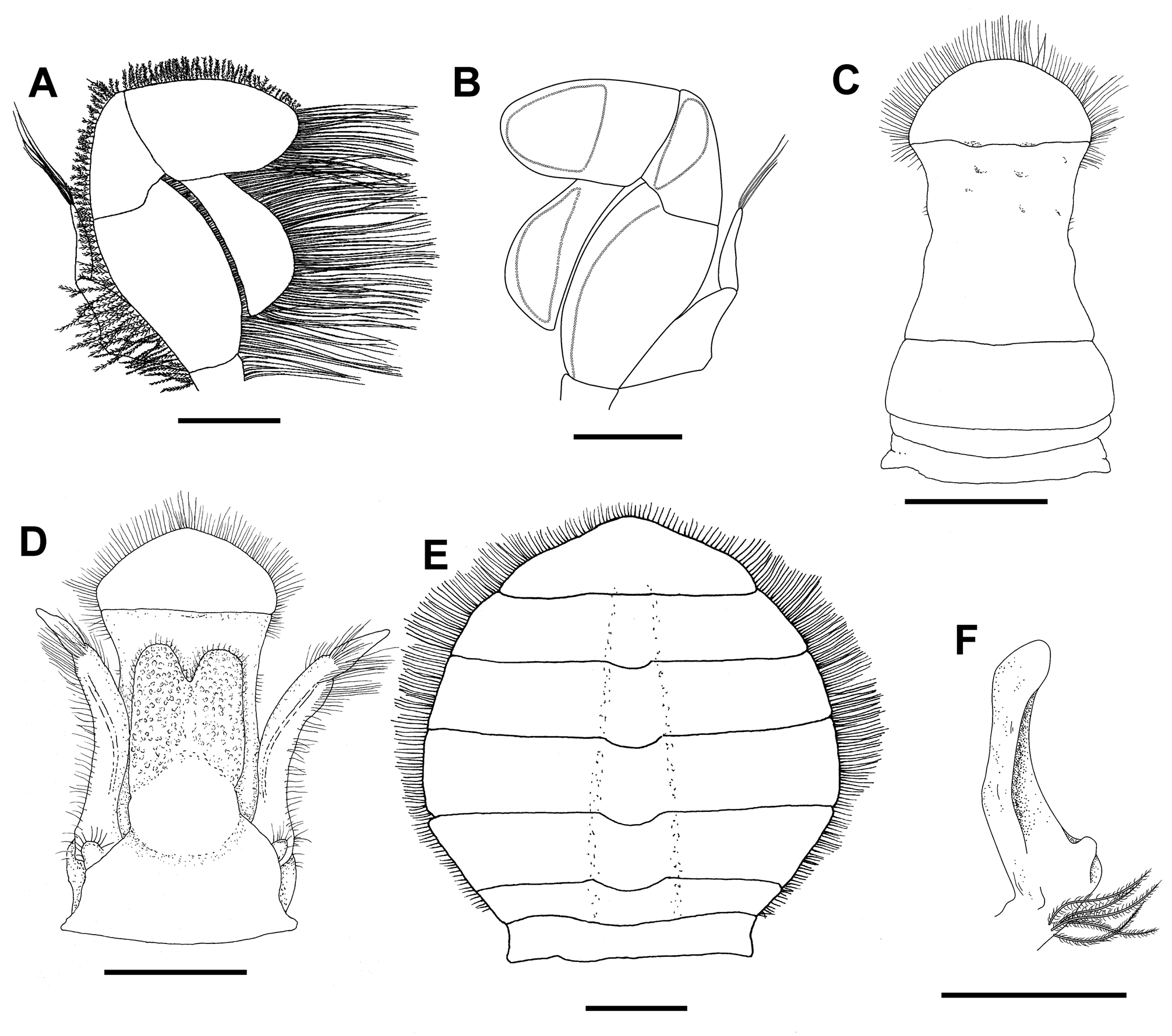 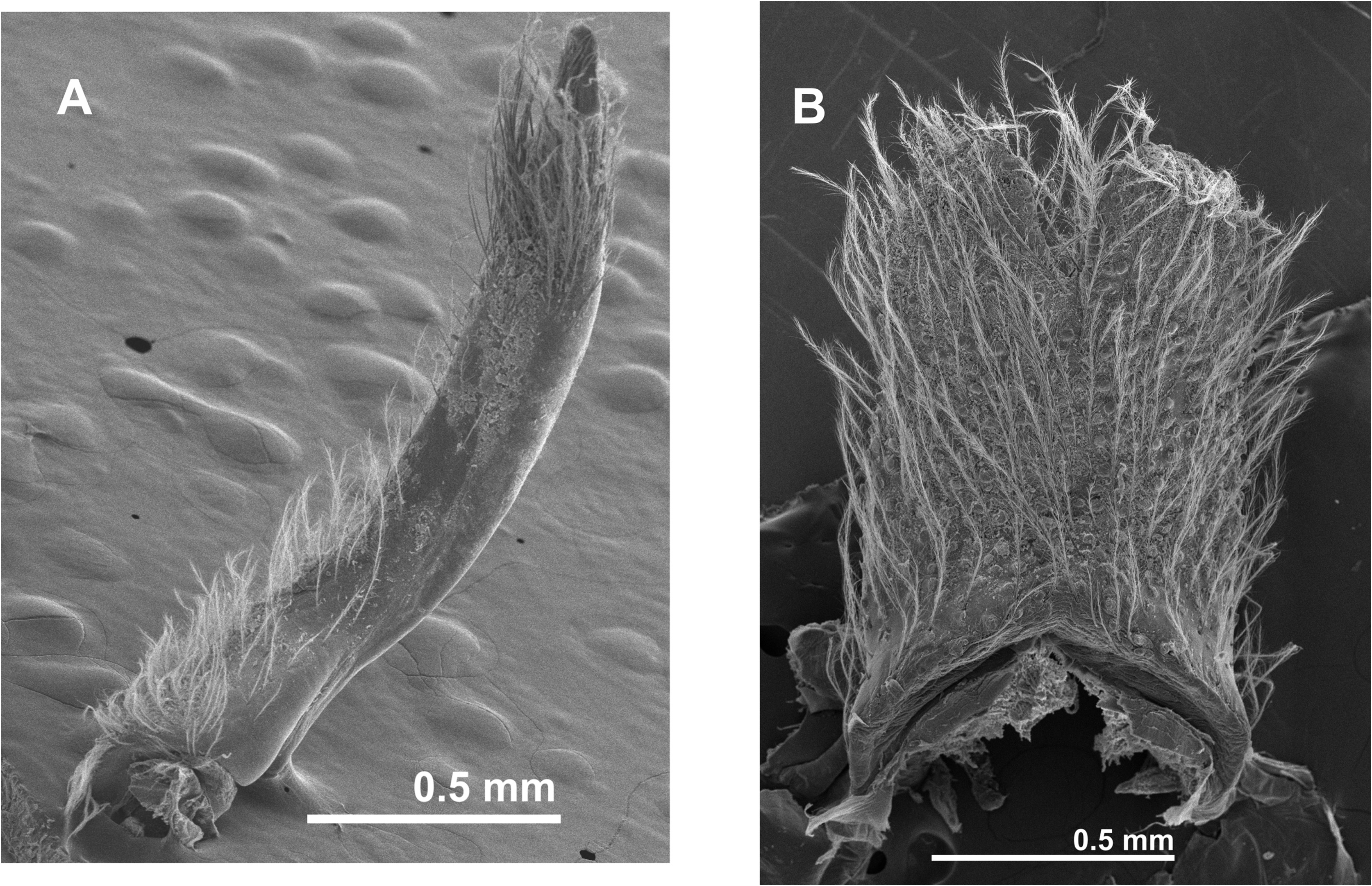