Etymology. The specific epithet conspicua   is an adjective in nominative singular, and is feminine to agree with the genus name Aphis   , which according to the context can means: “visible”, “that is in view”, “that is seen”, and also “distinguished”, “remarkable”, “indisputable”, which is in relation to the set of characters that the viviparous females present that allows us to easily separate this species from the remaining South American Aphis   species.

Descriptions. Apterous viviparous females ( Figs. 2 View FIGURE 2 A-2D). From 215 specimens. When alive matt yellowish grey to matt black. 1.125 –1.849 mm long. Metric and meristic features in Table 1 View TABLE 1 . Head, including clypeus and mandibular and maxillar lames and rostrum brown, sometimes with an irregular epicraneal line. Frons smoothly sinuate. Antennae usually six-segmented. Antennal segments I, II, V, VI and sometimes IV and a part of III as pigmented as cephalic dorsum, other parts of antennae brownish yellow. Antennal segments I, II and most of III smooth, IV with small transversal striae and V and VI imbricated. Rostrum reaches nearly to the hind leg coxae. Ultimate rostral segment darker than proximal ones and carrying 2 accessory setae. Legs well pigmented, usually brown like cephalic dorsum except for a small proximal portion of femora, and ¾ proximal of tibiae that are brownish yellow. Tarsal chaetotaxy formula 3.3.2. Prothorax with very extensive sclerotisation, although never complete, rough and variably pigmented; mesothorax with marginal patches and a complete or fragmented transversal band, both two reticulated and well pigmented; metathorax with marginal patches also pigmented and reticulated. Dorsal abdominal sclerotisation is variable; in the most sclerotized and darkest specimens segments 1 to 5 have spinopleural bands that are very irregular in shape, frequently interrupted, brown and reticulated, plus small marginal sclerites that carry the tubercles, and segments 6, 8 and occasionally 7 have small setiferous sclerites. In less sclerotized specimens only a few small and dispersed spinal or pleural sclerites are present on presiphuncular segments. Intersegmental and spiracular sclerites on thorax and abdomen dark brown. Marginal tubercles very broad and low, on prothorax and on abdominal segments 1 and 7, as is usual in Aphis   , and also on all intermediate abdominal segments (rarely lacking on 6), frequently also on metathorax and sometimes on mesothorax; the diameter of those on prothorax as long as or longer than the eye diameter, those on the thoracic segments and on abdominal segments 5 to 7 are smaller than others but their maximum diameter is as long as or longer than the nearest seta. Siphunculi cylindrical, sometimes basally enlarged, with small flange, homogeneously as dark as or darker than the abdominal dorsum and imbricated. Genital and anal plates dark-brown. Cauda long-triangular, sometimes with a very slight proximal constriction. Setae in general very long, very slender and pointed.

Bionomics. Specimens of A. conspicua   sp. n. live on the stems of plants of Baccharis salicifolia (Ruiz & Pav.) Pers.   and B. linearis (Ruiz & Pav.) Pers.   in compact groups. Alate females seem to be very rare. Sexual forms are not known so we are uncertain of their life cycle, but the species may be holocyclic.

Distribution. The area of distribution recorded for Aphis conspicua   is smaller than that of the other two species described here; the two localities placed at the ends of this area are 520 km from each other in a straight line, nevertheless it is possible that its range is broader and overlaps with the area of distribution of its host plants, Baccharis salicifolia   is known in Argentina from the northern border to Santa Cruz and in a large part of Chile to Aysén, and B. linearis   is known in the Chilean Andes slopes from Antofagasta to Aysén and in Argentina from San Juan to Chubut.

Taxonomic discussion. Aphis conspicua   sp. n. can be differentiated from species of “group 5” in the key to apterous viviparous females of Aphidina   species recorded in Argentina and Chile by Nieto Nafría et al. (in press) (see “taxonomic discussion” of A. fuentesi   for the distribution and size of its marginal tubercles). Among these species, only A. papillosa   has very large marginal tubercles, but these tubercles are absent on meso- and metathorax, usually absent on abdominal segment 6 (only 16% of specimens have 1 papilla at least [Mier Durante et al., 2003]) and can be absent on one side of abdominal segment 5. In addition, both species can be separated by the length of siphunculi 0.9–1.4 times cauda and 0.11–0.27 mm in A. conspicua   versus 0.4–0.9 times cauda and 0.07–0.16 mm in A. papillosa   , and also by the length of setae, which are longer in A. conspicua   , for example respectively in A. papillosa   and A. conspicua   , the setae on the vertex are 10–33 μm and 37–55 μm, on antennal segment III are 10–25 μm and 22–50 μm and on spinal zone of abdominal segments 2 or 3 are 10–31 μm and 35–57 μm.

Differences between the various Aphis   species that live on Baccharis   species are shown in the identification key to apterous viviparous females at the end of the “taxonomic discussion” section of Aphis fuentesi   . 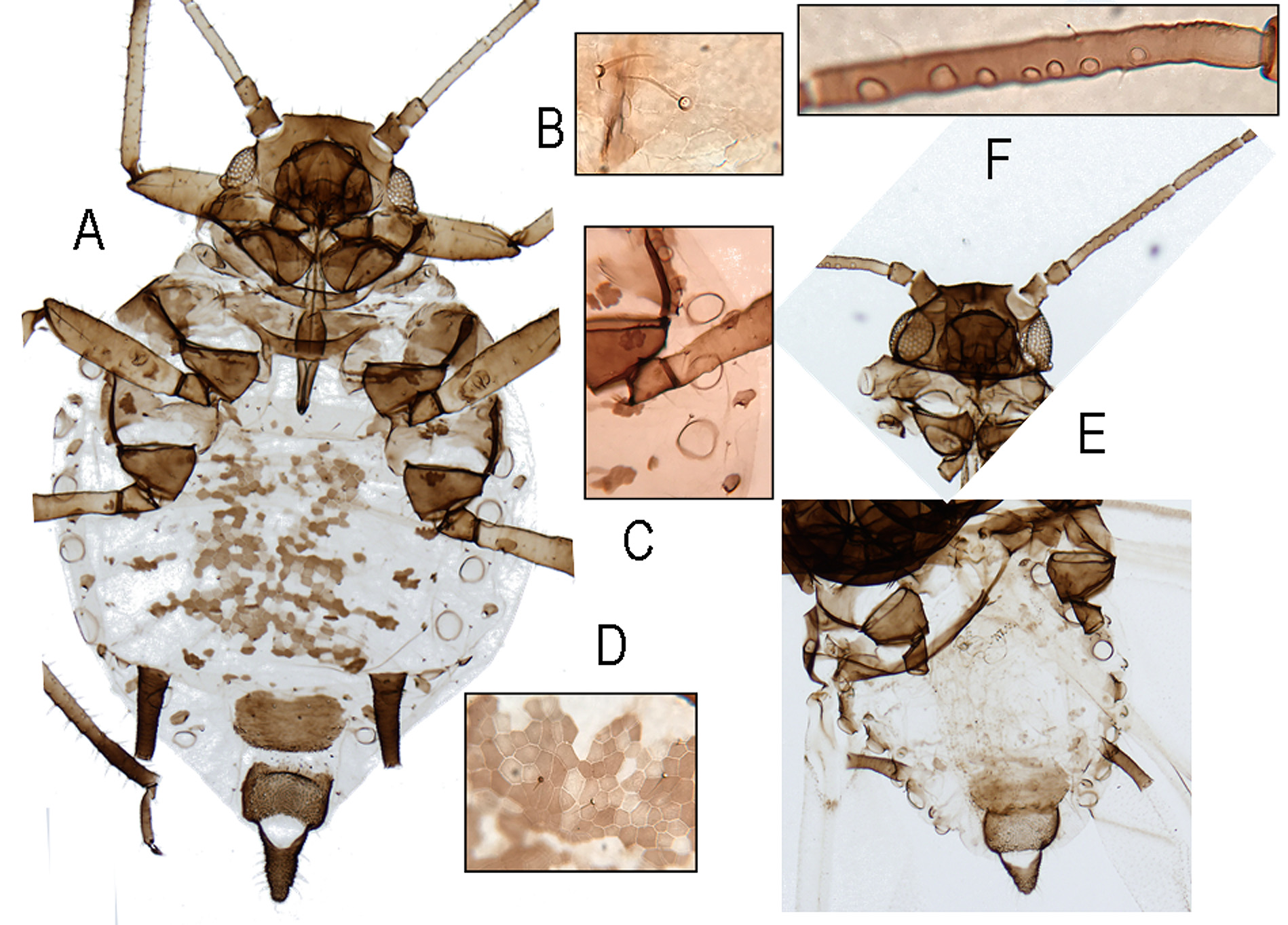