Mandibular palp: article 2, dorsal margin without a fringe of setae.

Maxilla 1: without a seta or setal cluster at the base of the palp article 1.

Gnathopod 1: basis, anterolateral margin with a few very short setae; carpus without a single or small cluster of setae at the anterodistal junction of the propodus.

Gnathopod 2: basis with a few minute setae along the anterolateral margin but without long filter setae (most setal lengths <10% of the basis width); carpus and propodus, setae on the anterior margin short and simple (setal length <basis width).

Uropod 3: inner ramus without spines mid-dorsally (with only the single apical spine).

Telson: tip without apical setae, only the usual short setae at each dorsolateral cusp.

Antenna 2: without plumose setae on the flagellum and peduncular article 5.

Antenna 2: without plumose setae on the flagellum and peduncular article 5.

Four populations sampled in Väderârna, Sweden, Trondheimsfjord, Norway, Riŝr, Norway and Tórshavn, Farøe Islands showed a similar relationship between thumb length and body length, with the juveniles having prethumbs and the minor forms being rare ( Fig. 40View FIGURE 40). Jassa pusilla  is a small species, with the minor forms 2.8–3.8 mm in body length and the major forms 3.0– 4.5 mm in these four populations.

The record of J. pusilla  from samples along the coast of Portugal by Lobo et al. (2017) is in error, and is the new species J. laurieae  . The three collections of J. pusilla  from deep water offshore of the Atlantic U.S. coast (NMNH 6335, 33530, and 106781) ( Fig. 9View FIGURE 9) morphologically resembled this species, not either of the other two species from this coast ( J. valida  and J. marmorata  ), which occur shallower. Jassa pusilla  is a smaller species with delicate, never plumose antennae, lacking the typical long setae along the basis of gnathopod 2 that the other two possess, and also lacking the diagnostic antero-medial seta on the gnathopod 1 carpus at the junction of the propodus. The minor form thumbed male of Jassa pusilla  has a strong tooth on the inner margin of the dactyl, which the minor forms of the other two species lack. One of the specimens from NMNH 6335 was a 3 mm long minor form thumbed male with a strong tooth on the dactyl, its propodus closely resembling that in Figs 38View FIGURE 38 and 39EView FIGURE 39. Another thumbed male (NMNH 33530) closely resembled Fig. 39BView FIGURE 39. The other specimens were female or juvenile. These three collections are the only ones known from the western North Atlantic. FIGURE 9. Records of Northern Hemisphere species of Jassa that were found in the eastern and/or western North Atlantic and seas, along with J. kimi in the western Pacific. Red dot: identification confirmed by specimen examination; green triangle: literature record (Supplementary Table S1) with identification not confirmed but judged likely to be this species; blue x: suspected or known to be on the hull or interior of a boat or ship. 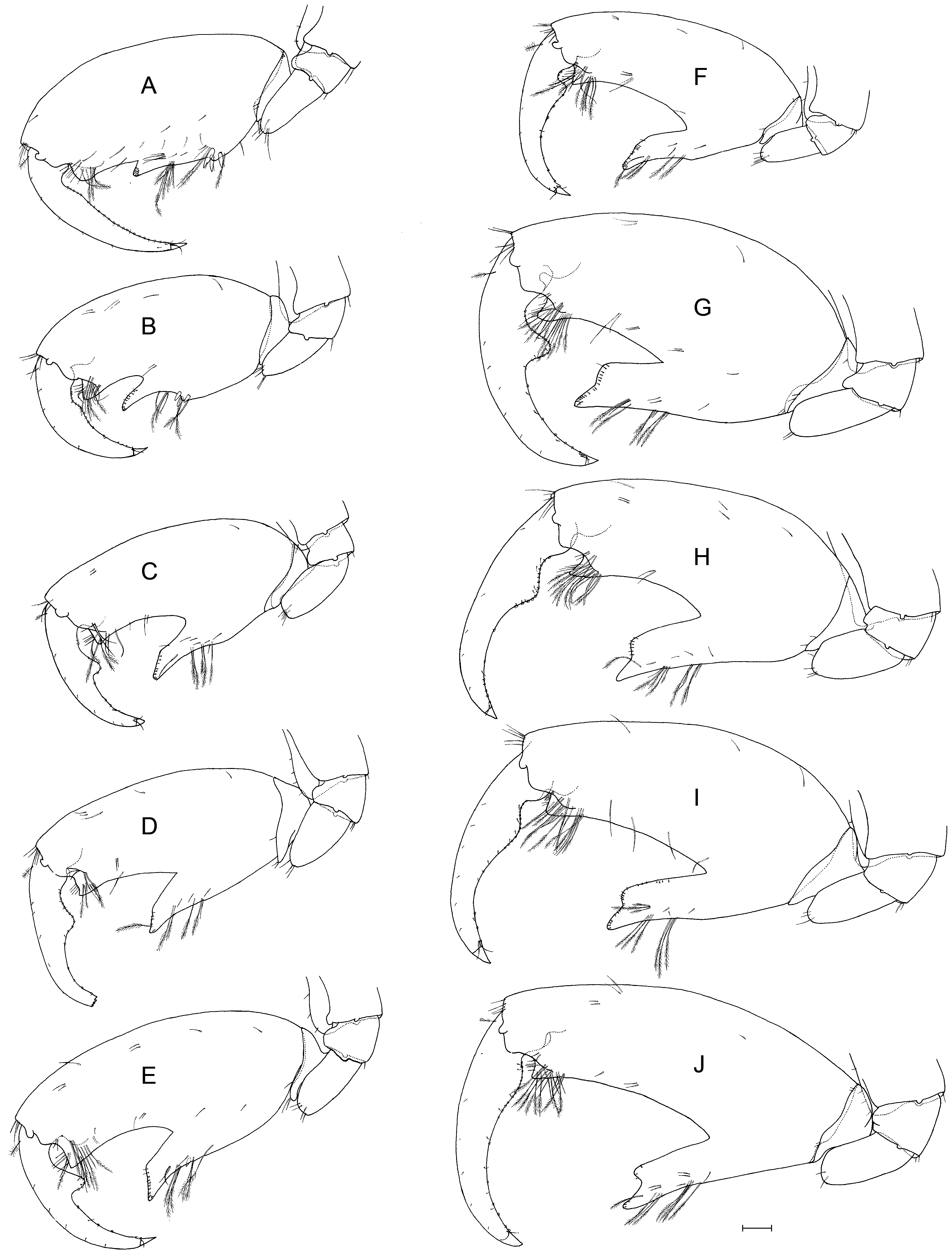 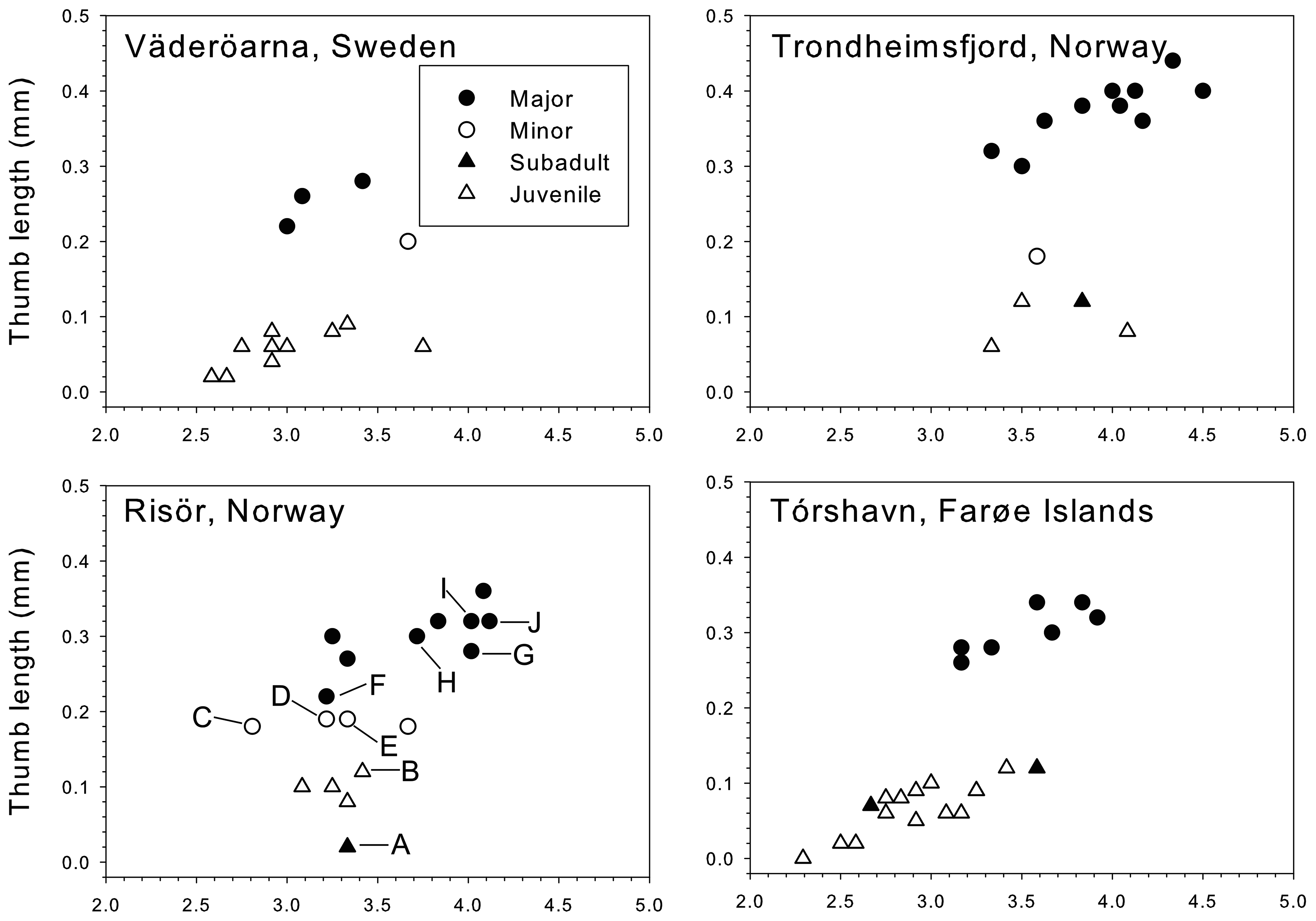