A species of Piima gen. nov. with a black dorsum having a median white band and large white dots occasionally merged with each other; the copulatory is apparatus comparatively long; the muscularis of prostatic vesicle is extraordinarily strong; the penis papilla is finger-shaped; the male atrium has a distal, large traversed annular fold; the female genital duct is dilated and dorso-anteriorly flexed above the female atrium; the muscularis of the female atrium is very thick and dense.

The name ' ata' (' atã ') is a Tupi (indigenous Brazilian language) word meaning ' strong' ( Tibiriçá 1984). It refers to the very thick muscle of the prostatic vesicle.

MEASUREMENTS. Living holotype is 30 mm in length and 3 mm in width.

BODY. Slender, with parallel margins; the anterior is extremity rounded; the posterior extremity is pointed. The dorsal side is convex; the ventral one is flat; the body margins are rounded. The dorsal color is black and white ( Fig. 10A View Fig ). The anterior 10% of the body exhibits a median black band separated from the black margins by a whitish area. Subsequently to this section, a pair of transverse black lines separated by a whitish band appears. From behind these black lines to the posterior end, the color is black except for a median white band (20% of the body width) and large white dots occasionally merged with each other. The ventral side is white, slightly gray in the first two millimeters of the body.

EYES. 30–50 µm in diameter, monolobated and lacking halos. These eyes are marginally located in a single row encircling the anterior region, and distributed in two-to-three irregular marginal rows until the posterior end of the body where they are scarce. The sensory pits are simple invaginations 30 μm deep; and located ventro-marginally in a single row, from the very anterior end up to a portion equal to 30% of the body length. The relative mouth: body length is 61%; the relative gonopore: body length is 77%.

EPITHELIUM. Ciliated only in the creeping sole, which is 74% of the body width in the pre-pharyngeal region. The ventral epithelium of the cephalic region is pierced by necks of numerous cells producing erythrophil granules. Besides rhabditogen cells, the dorsal and ventro-marginal epithelium of the prepharyngeal region is pierced by necks of two types of cells producing xanthophil and cyanophil granules, respectively, the latter also discharging their content through the ventral epithelium. A glandular margin is absent.

CUTANEOUS MUSCULATURE. Consists of three muscle layers, namely a thin subepithelial layer (2.5 µm thick, dorsally and ventrally) of circular fibers, followed by a layer of decussate fibers (2.5 µm thick, dorsally and ventrally), and an innermost layer of longitudinal fibers (10 µm dorsally, 18 µm ventrally), arranged in loose bundles of 4–12 fibers each. The cutaneous musculature thickness relative to the body height is 7.4%. There are three parenchymal muscle layers: a dorsal layer (3 µm thick) of decussate fibers, a supraintestinal layer (30 µm thick) of transverse fibers, and a subintestinal layer (25 µm thick) of transverse fibers, lying above the ventral nerve plate. Towards the anterior end of the body, these layers become thinner and extinct.

MOUTH. Lies about half way along the pocket ( Fig. 10B View Fig ). The pharynx is cylindrical, with its dorsal insertion slightly posteriorly located. An esophagus is inconspicuous. The outer pharyngeal epithelium is underlain by a one-fiber-thick longitudinal layer, followed by a two-fiber-thick circular one. The inner pharyngeal epithelium consists of a layer (50 µm thick) of circular fibers with some interspersed longitudinal fibers in its ectal portion.

ROUNDED TESTES. 200 µm in diameter, located between the supraintestinal parenchymal muscle layer and the intestinal diverticula ( Fig. 10C View Fig ). They are arranged in a single row on each side of the body, and extend from shortly behind the level of the ovaries (equal to 21% of the body length) to closely to the root of the pharynx (equal to 56% of the body length). The efferent ducts are located between the fibers of the transverse subintestinal muscle layer. The distal portion of these ducts contains sperm and is dilated. Reaching the penis bulb, these ducts bend anteriorly to the sagittal plane and subsequently penetrate the antero-dorsal portion of the muscularis of the prostatic vesicle to open laterally into the anterior portion of the prostatic vesicle. The prostatic vesicle is elongate, narrower distally ( Figs 10D View Fig , 11 View Fig A–B). This vesicle is straight and inclined postero-ventrally. The lining epithelium of the vesicle is cuboidal and ciliated. Cells producing fine erythrophil granules and scarce cells secreting cyanophil granules discharge their products through the epithelium into the vesicle. The muscularis of the prostatic vesicle is composed of an extremely dense and thick muscle (350 µm thick) of superposed layers of diagonal fibers. The vesicle communicates with the ejaculatory duct in the ventro-anterior section of the penis bulb. The proximal portion of the ejaculatory duct meanders towards the dorsal side; subsequently, it crosses the center of the penis papilla ( Figs 10E View Fig , 11B View Fig ). The ejaculatory duct is lined with a cuboidal, ciliated epithelium, and is underlain by a circular muscle, 20 µm thick anteriorly, 5 µm thick distally.

PENIS PAPILLA. Close to its opening at the subapical tip, the ejaculatory duct widens slightly and the free surface of its lining epithelium is undulated and apparently not ciliated. The penis papilla is finger-shaped, with a conical tip, and horizontally positioned ( Figs 10E View Fig , 11 View Fig A–B). This papilla projects from the anteroventral section of the male atrium and is half as long as the male atrium. The penis papilla is lined with a squamous-to-cuboidal epithelium, which is pierced by necks of cells producing cyanophil granules. The epithelium of the distal half of the papilla is additionally crossed by necks of cells producing xanthophil granules. The muscularis of the penis papilla is composed of a subepithelial circular muscle followed by a longitudinal muscle. These layers are dense and thick (25 µm and 15 µm each) in the proximal section of the papilla, but inconspicuous distally.

MALE ATRIUM. Elongate and divided into two halves. The anterior half houses the penis papilla and is relatively smooth ( Fig. 11 View Fig A–B). Dorsal to the penis papilla, the male atrium possesses a recess ( Fig. 11 View Fig B– C). The distal half is narrower and provided with a large, transverse annular fold. The lining epithelium of the male atrium is squamous-to-cuboidal, and is crossed by necks of cells producing granules with a weak affinity for a cyanophil stain. In its bottom, the dorsal recess receives xanthophil granules produced by numerous cells; in its distal section, the recess receives eryhtrophil granules ( Fig. 11C View Fig ). The muscularis of the male atrium is strong, and composed of a dense subepithelial circular muscle, followed by a longitudinal one; the thickness of these muscles becomes highest in the midregion, 100 µm and 10 µm, respectively. A muscle coat of decussate fibers envelopes the male atrium.

OVARIES. The vitellaria are well developed. The ovaries, ovoid, are 200 µm in length and 150 µm in diameter. They are ventrally located between the intestine and the subintestinal parenchymal muscle layer ( Fig. 11D View Fig ). They are located at a distance from the anterior extremity of the body equal to 20% of the body length. The ovovitelline ducts arise from the dorso-lateral aspect of the ovaries. The proximal portion of these ducts is slightly dilated and contains spermatozoa. These ducts run ventrally to the sperm ducts, between the fibers of the subintestinal parenchymal muscle layer. Reaching the region of the gonopore, they bend obliquely to the sagittal plane and subsequently join to communicate with the common glandular ovovitelline duct, the latter located dorsally to the female atrium ( Fig. 11B, E View Fig ). The ovovitelline ducts are surrounded by a decussate muscle. The distal portion of these ducts receives shell glands. The common ovovitelline duct is long, horizontally placed, and surrounded by a decussate muscle 8–15 µm thick. The common ovovitelline duct connects with a short canal similar to this common duct but devoid of shell glands. In turn, this short canal opens into the anterior face of a dorsal, large and dilated female genital cavity. This cavity is located dorsally to the posterior region of the female atrium. The cavity contains a lump of a cyanophil granular mass attached to a strongly erythrophil secretion. The erythrophil secretion exhibits an amorphous aspect in some regions, while in others it is constituted of parallel strands ( Fig. 11E View Fig ). The female genital cavity is lined with an epithelium having a multilayered aspect and an irregular free surface; the epithelial portion nearest to the common ovovitelline duct exhibits gaps. The epithelial female genital cavity is crossed by necks of cells producing erythrophil granules, and its muscularis is composed of a circular muscle (9 µm thick), followed by a thin longitudinal muscle. The female atrium is long and spacious; it is more dilated in its midregion. It is 75% as long as the male atrium.

This species is peculiar among the members of Geoplaninae and does not fit well any of the 24 current geoplanin genera (the collective genus Pseudogeoplana Ogren & Kawakatsu, 1990 excluded). The species resembles more closely the diagnostic features of Paraba ( Geoplaninae ), in that the body is slender, the eyes are monolobate, the pharynx is cylindrical, the prostatic vesicle is extrabulbar, the penis papilla is protrusible, the ovovitelline ducts join each other above the female atrium, and the female atrium is clothed with an epithelium with a multilayered aspect ( Carbayo et al. 2013). However, the copulatory apparatus is comparatively longer, the muscle of the prostatic vesicle is extraordinarily thick (vs thin), the male atrium presents a distal, large annular fold (vs not folded), the penis papilla is finger-shaped (vs conical) and in that there is no female genital duct but a dilated genital cavity projected forwards over the female atrium. This combination of features is unique among all members of Geoplaninae and leads to the proposal of a new genus for it. In favor of this proposal are the ambiguous phylogenetic affinities of the species to other Geoplaninae species, as inferred from molecular data (see Carbayo et al. 2013). None of the molecular analyses placed the new species within, or sister to, the clade constituted by the type species of Paraba (i.e., P. multicolor (Graff, 1899)) and other members of this genus. The Bayesian Inference (BI) ( Carbayo et al. 2013, fig. S2B) analysis positioned the new species as a sister species of P. phocaica with a high posterior probability, whereas the Maximum Likelihood (ML) ( Carbayo et al. 2013, fig. 3) analysis shows a low support for this clade. The Maximum Parsimony (MP) analysis revealed this species as sister to a large group including members of several genera, none of them members of Paraba . Therefore, the molecular approach indicates that Piima ata sp. nov. does not show a close relationship to any of the genera, nor do the morphological attributes support the membership of these species to any of the current genera. For this reason, a new genus is proposed for this species. 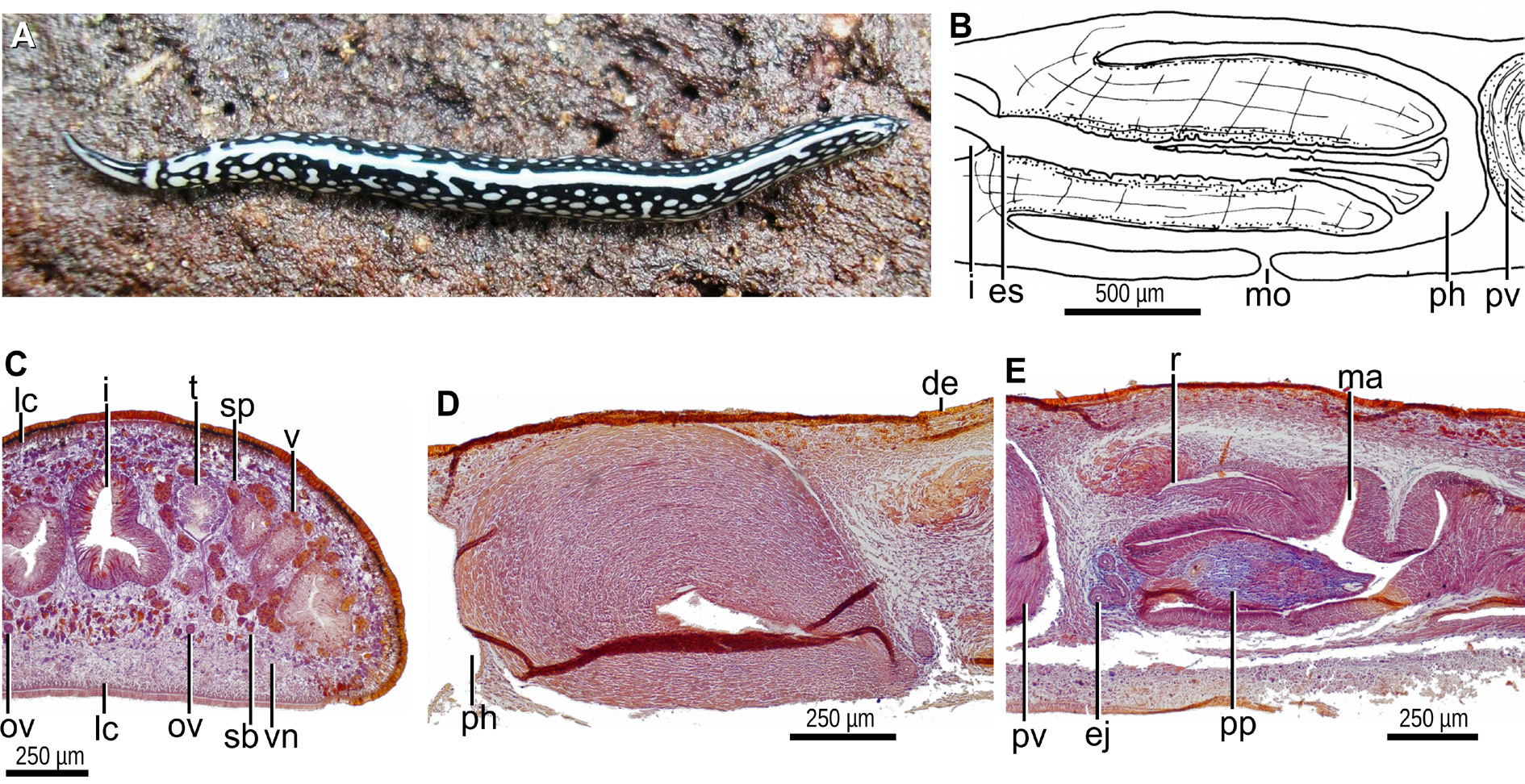 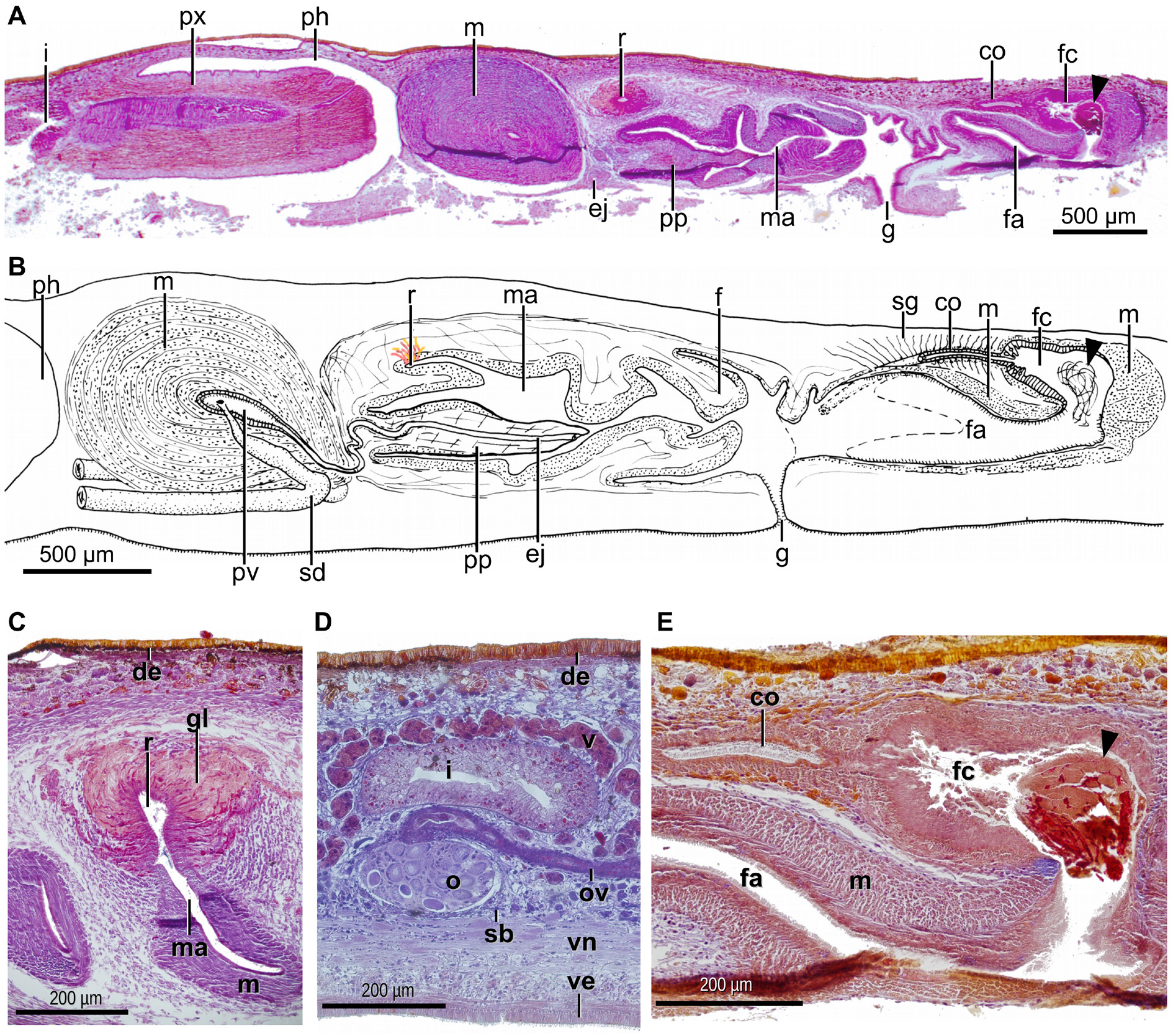