Skeleton. At the surface there is a thick cover of aster microscleres carried by loose bundles of both smaller and larger oxeas, which push up the surface into low blunt conules. Inbetween these conules there is a network of inhalant openings 0.2–0.4 mm in size. The skeleton of the choanosome is largely confused, consisting of individual larger oxeas strewn without obvious direction, and crowded asters. Smaller asters rare, found in dissoluted spicule mounts, but not readily detected in a thick sections.

Distribution and ecology. Guyana Shelf, on sandy bottom at 130 m.

Etymology. Camelus  (L.) = camel, referring to the shape of the holotype resembling a camel’s two humps.

Remarks. The only other Central West Atlantic Hemiasterella  is H. ajax ( De Laubenfels, 1950)  (originally Epallax ajax  ) from an inland mangrove pond in Bermuda  . A paratype, BMNH 1948.8.6.49, was examined. It shows considerable similarity to the new species: it is a globular mass with large fusiform oxeas as megascleres and two distinct size categories of oxy(spher)asters as microscleres. There are also compelling differences between the two species. The Bermuda specimen is white (in life as well as in alcohol), the larger oxeas are thinner and longer (1500–3300 x 15–32 µm), there are no small oxeas in the size range below 1000 µm, and the larger oxyasters are not oxyspherasters and all have a small number of rays (usually 3–4). Furthermore, the Bermuda species is only known from a shallow water inland pond, quite the opposite of the new species, which was taken at 130 m depth.

Some resemblance is also apparent with the recently described Jaspis atolensis Lira & Pinheiro, 2015  from the Atol das Rocas in NE Brazil (depth given as ‘loose above the reef’, thus probably from shallow-water). The shape is dissimilar, but irregularly massive, so not too distinct from H. camelus  sp. nov. Its skeleton and spicule complement is not unlike the above-described specimen, but the larger oxeas are only up to 1400 x 13 µm (against up to 2220 x 58 in H. camelus  sp. nov.). In view of this and the different depth occurrence, it is likely a related but different species. Assignment to Jaspis Gray, 1867  appears unjustified as the smaller oxeas are not arranged tangentially as in the type species, J. johnstonii ( Schmidt, 1862)  . Lira & Pinheiro’s (2015) redescription of the type specimen of Schmidt rather contrasts with those of earlier authors ( Topsent 1900 as Coppatias johnstonii  , and Uriz 2002) by its emphasis on an ‘undifferentiated’ ectosome. This probably relates to the quality of the dry type material rather than to the true properties of Jaspis johnstonii  , which does have an ectosomal tangential or paratangential crust of the smaller oxeas. Jaspis atolensis  fits probably better in Hemiasterella  . 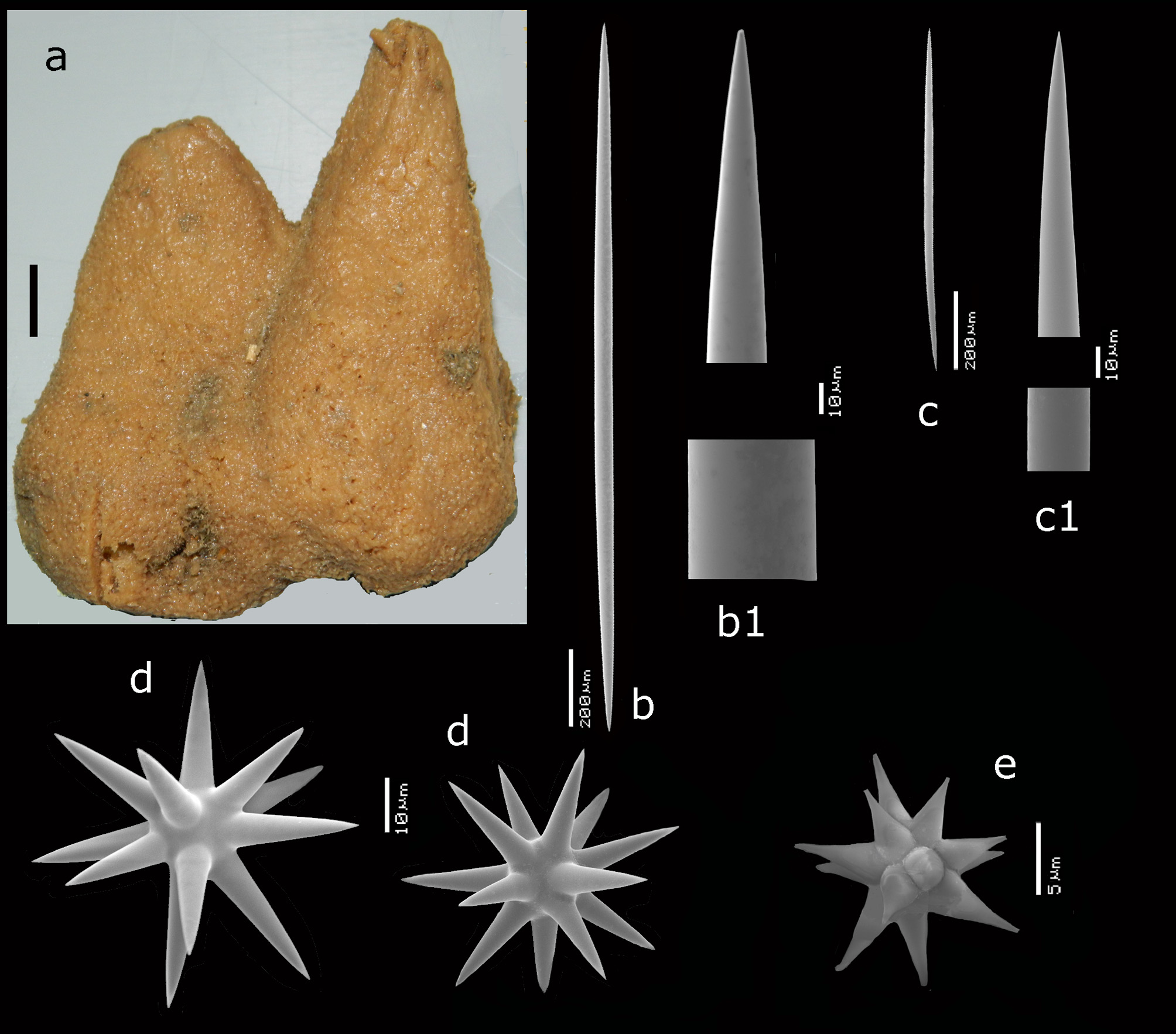