Vampyrodes caraccioli usually included V. major as a subspecies, but P. M. Velazco and N. B. Simmons in 2011 proved their distinction as valid species. Vampyrodes ornatus (northern Peru) is a junior synonym. Monotypic.

Habitat. Humid lowland forests along northern and western margins of the Amazon Basin at elevations of 300-1000 m. In Venezuela, Caracciolo’s Stripe-faced Bat was caught predominantly in tropical and subtropical humid forest habitats, usually at elevations of less than 500 m but occasionally as high as 1000 m. In Eastern Brazil, it occurs in humid forests of the Atlantic rainforest. It is strongly associated with tropical evergreen forests with multiple strata and also is found in plantations and gardens.

Activity patterns. Activity of Caracciolo’s Stripe-faced Bat might be similar to its sister species, the Great Stripe-faced Bat (V. major ), which is more active in the first two hours after sunset and around midnight in Panama. Day roosts of Caracciolo’s Stripe-faced Bat include foliage, branches, and palm fronds where groups of 2—4 individuals have been recorded. Fruits are carried one at a time from a fruiting tree to a feeding night roost. Although sometimes caught in ground-level mist nets, it usually flies 3 m or more aboveground.

Movements, Home range and Social organization. Caracciolo’s Stripe-faced Bat can be found roosting in small groups of adults and their young under foliage oftall trees, shrub branches, and palm leaves; leaves are not modified to form a tent.

Status and Conservation. Classified as Least Concern on The [UCN Red List. Caracciolo’s Stripe-faced Bat is widely distributed, seems tolerant ofvarious habitats, and is unlikely to be declining at a rate that would cause it to be classified in a threatened category. 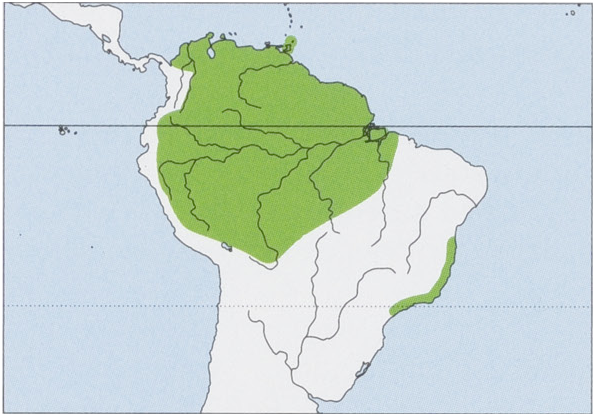