Several subspecies of A. nichollsi have been described and are distributed in 13 Lesser Antilles islands; subspecies annectens named by G. S. Miller, Jr. in 1913 (from Guadeloupe and Marie-Galante) was recently synonymized with montserratensis. Five subspecies recognized.

Descriptive notes. Head-body 60-67 mm (males) and 62-63 mm (females), no tail, ear 12-16 mm (males) and 13-18 mm (females), hindfoot 12-13 mm (males) and 12-14 mm (females), forearm 42:-5—44- 9 mm (males) and 44-9-48- 8 mm (females); weight 15-1-18: 5 g (males) and 17-8-22- 8 g (females). Females are much larger than males. The Tree Bat is medium-sized. Pelage is long and overall pale brown and paler grayish beige underneath. Each hair is tricolored on dorsum, with darker brown base and tip and pale yellowish intermediate band. Dense hair covers proximal one-half of pinna. Ear pinna is pale, and part of internal pinna surface is pinkish yellowish. Inferior border of thickened horseshoe is V-shaped, and pad-like structure surrounds noseleaf. Dactylopatagium minusis broad, translucent, and remains permanently opened. Pair of pure white fur patches occurs on shoulders, and another pair on each side ofthe neck— a condition shared by all Stenodermatini bats. Dental formula is 1 2/2, C 1/1, P 2/2, M 3/3 (x2) = 32. 1' is triangular, with crown that is roughly as high as it is wide, main cusp displaced mesially, and small lateral accessory cusps. There is posterolabial cusp on P,. M, lacks metaconid, and M”is small and peg-like. Rostrum is very shortened and broad. Nasals are arched and elevated above facial maxilla, sagittal crest is developed, and there is a wide U-shaped posterior border on hard palate, as in its sister genus Ariteus . Mesopterygoid fossa is narrow and deep. Variation of size of subspecies among the Lesser Antilles islands is not considered clinal, and subspecies have been recently redefined on the basis of size and molecular data. Subspecies montserratensis and nichollsi could not be distinguished by molecular data, but nichollsi is smaller; vincentensis is a smaller subspecies, followed by nichollsi . Chromosomal complement has 2n = 30-31 and FN = 56.

Breeding. A female Tree Bat from St. Eustatius (montserrratensis) was pregnant in spring (15 mm fetal crown—rump length). One lactating female was caught in April, and five pregnant females with embryos in different stages of development were caught in March-April in Dominica ( nichollsi ). A pregnant female was caught on Saba, with an embryo having a crown—rump length of 14 mm and weighing 25-9 g.

Activity patterns. The Tree Bat roosts in trees and other types of arborescent vegetation, apparently moving only short distances to forage. Spinturnicidae and Listrophoridae mites have been collected from subspecies nicholls:.

Status and Conservation. Classified as Least Concern on The IUCN Red List. The Tree Bat is distributed on most Lesser Antilles islands and occurs in protected areas, but on several islands, habitats have been severely reduced. Fragmentation of forested habitats might impact viability of populations. Hurricanes and volcanic eruptions might cause severe impacts and population fluctuations for some island bat species such as the Tree Bat, with a slow recovery times. 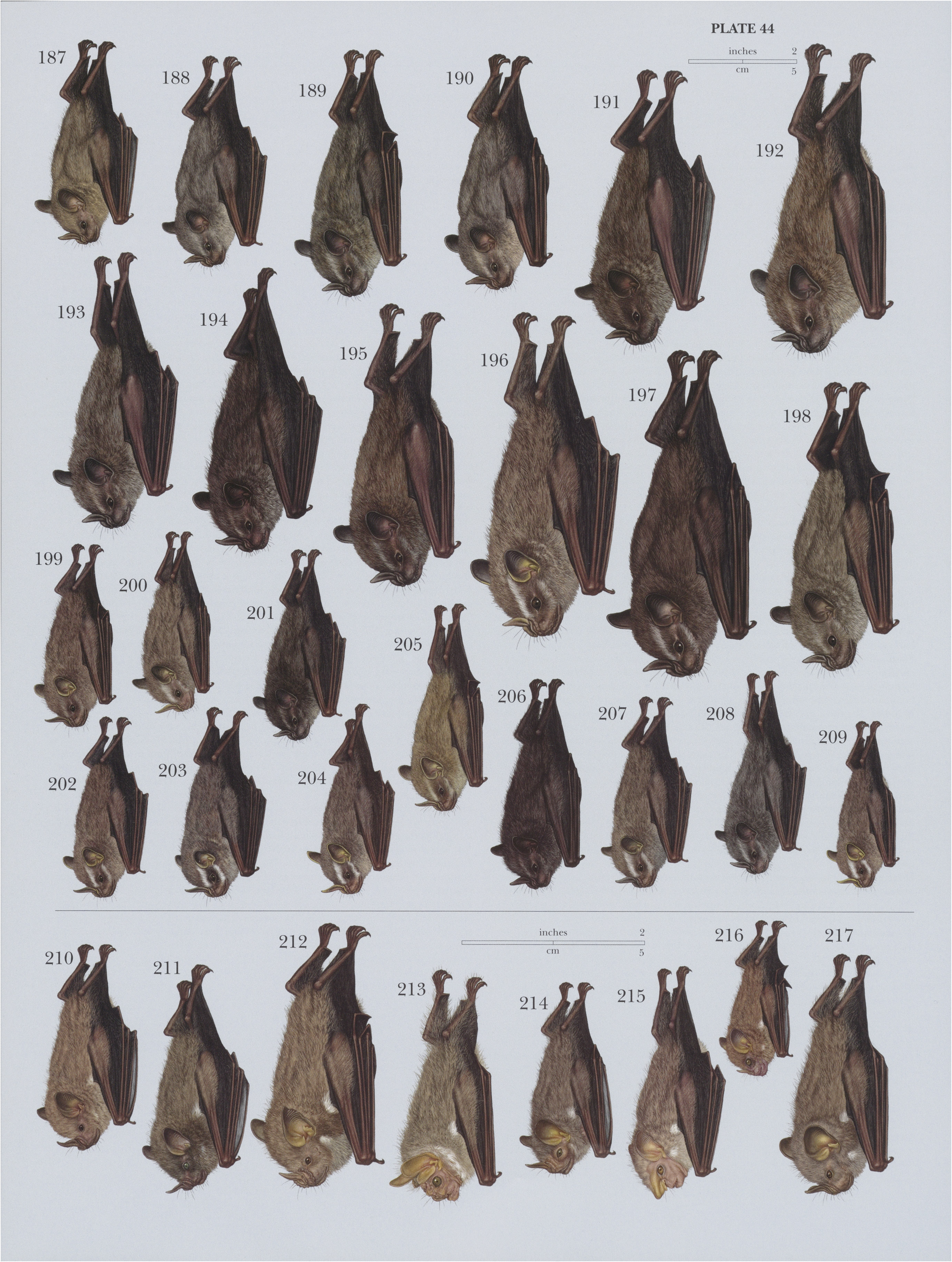