Descriptive notes. Head—body 54-75 mm, tail 11-20 mm, ear 21-33 mm, hindfoot 8-8 18 mm, forearm 41-48-6 mm; weight 10-3-18-4 g. The Hairy Big-eared Bat is the largest species of Micronycteris . Greatest lengths of skulls are 21-6-24-4 mm. Hairs on dorsum are bicolored, varying from grayish to brown with pale basal bands. Hairs on anterior back, shoulders, head, and sides of neck have one-fourth to one-half white to gray bases. Venter is lighter than dorsum and lightly frosted, with light gray to light brown basal band and cream tips. Fur over shoulders is 11-14 mm long. Forearm is conspicuously haired overits entire length. Males have crown of hairs in anterior part of interauricular band, with these hairs being 3—4 times longer than those on back; they are also thicker and lighter, with white basal band. The Hairy Big-eared Bat has long ears, with deeply marked posterior surface folds. In both sexes, ears are connected by transverse band that extends overhead and presents shallow notch orslit in center. Calcar is longer than foot. Tail is about one-third the length of uropatagium and is almost completely enclosed in it; uropatagium is attached very near ankles and does not exceed feet in length. Chin has an obliqueslit, flanked by two nearly hairless pads that converge toward bottom. Skull is robust, similar in shape to those of the Little Big-eared Bat ( M. megalotis ) and the Tiny Big-eared Bat ( M. minuta ) but much larger, and braincase is less elevated above rostrum. Sagittal crest is more pronounced than in other species of Micronycteris , mastoid width is less than zygomatic width. Occipital bone has pointed posterior end when viewed dorsally. Lower incisors are markedly hypsodont, with high crowns that are three times taller than wide, and I' are long and narrow. Sizes of lower premolars have a consistent pattern: P, is slightly smaller than P, and P,, and P, is larger than P,. Analyses have revealed distinct chromosomal complements among Hairy Big-eared Bats: 2n = 26 and FN = 30 in Ecuador; 2n = 28 and FN = 32 in Trinidad and Tobago; 2n = 30 and FN = 32 in Honduras, Nicaragua, and Suriname; and 2n = 26 or 25 and FN = 32 in Brazil, with striking variation in diploid and fundamental numbers in Central America and South America. Chromosomal arrangements of Hairy Big-eared Bat seem to be highly derived relative to those of other species of phyllostomids. Some authors suggestthat these findings of varied cytotypes reinforce the hypothesis that it might not be a monotypic taxon; however, other authors believe that this pattern is explained by geographical variation and recolonization of species from Central America to South America afterits trans-cis Andean separation.

Food and Feeding. The Hairy Big-eared Bat is mainly a gleaning insectivore, butit also eats fruit, especially in dry season. Most food items are insects, particularly large night-flying insects that are taken back to roosting sites to be eaten. Most remains found at roosts are from katydids ( Orthoptera ), beetles ( Coleoptera ), cockroaches ( Blattodea ), dragonflies (Odonata), cicadas ( Hemiptera ), moths and caterpillars ( Lepidoptera ), and winged ants ( Hymenoptera ). Tettigoniidae is the most common family of katydids in diets. Observations suggest that Hairy Big-eared Bats use various strategies to catch prey. Most insect prey, except dragonflies, are nocturnal and, although capable orflight, spend a great deal of time moving on surfaces of vegetation, suggesting Hairy Big-eared Bats glean prey from substrates. They also eavesdrop on incidental insect sounds, use echolocation to locate silent and motionless prey on vegetation, and catch prey in flight. Studies showed that the greatest capture of insects occurs on well-lit nights, suggesting they could also be guided by vision, smell, or hearing. These gathering skills also are probably used to take fruits from plants. The Hairy Big-eared Bat uses its molars to crush and chew insects it catches, and it modulatesits performance by changing its biting behavior to maximize bite force when feeding. Most remains offruit found in roosts consist of seeds or dried parts of pulpy fruit. Some families reportedly eaten are Cyclanthaceae , Piperaceae , Lauraceae , Anacardiaceae , Hypericaceae , Passifloraceae , and Myrtaceae . Leaves found in litter might also be ingested accidentally with insects carried back to roosts.

Activity patterns. The Hairy Big-eared Batis nocturnal. In Brazil, activity records are mainly between 30 minutes and 3-5 hours after sunset. There is also a record from Bolivia at 07:40 h. Hairy Big-eared Bats commonly roost in damp hollows near the ground, hollow trees, cavities under roots, fallen logs, and culverts; under bridges; and inside abandoned buildings.

Movements, Home range and Social organization. Hairy Big-eared Bats commonly roost in small groups of no more than five individuals composed of adults and subadults of both sexes.

Status and Conservation. Classified as Least Concern on The IUCN Red List. Lack of information about naturalhistory of the Hairy Big-eared Batis because ofits rarity and small group size, and it is not commonly captured in mist nets. 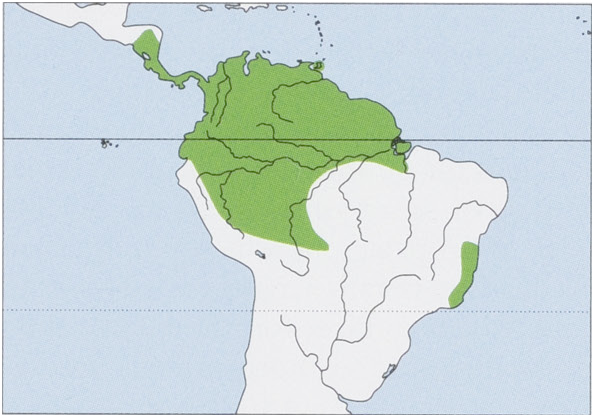