Descriptive notes. Head-body 103-122 mm, tail 7-17 mm (but can appear absent), ear 40-48 mm, hindfoot 21-26 mm, forearm 78-86 mm; weight 66-96 g. The Woolly False Vampire Bat is the second largest phyllostomid, only behind the Spectral Bat ( Vampyrum spectrum ). Its fur is long, woolly (more evident on dorsum), and gray to dark cinnamonbrown. Venter is gray, paler than back. Tail is very small and thin and can be indistinguishable in some specimens;it is fully encased in base of uropatagium. Ears are very large and rounded, proportionally larger than in the Spectral Bat or any other bat ofits size. Eyes are large and black. Noseleaf is well developed. Lower part or horseshoe forms cup or saucer, with nostrils in its center; lancet is broad and of medium height, with thick midrib that runs its length. Lowerlip has V-shaped groove in chin. Proximal one-half of forearm is furred. Calcar is well developed and longer than foot. Dental formula is 12/1, C1/1,P2/3,M 3/3 (x2) = 32. Chromosomal complement has 2n = 28 and FN = 52. Xchromosome is submetacentric, and Y-chromosome is acrocentric.

Habitat. Mostly tropical rainforest but also tropical dry forests, cloud forests, and other tropical ecosystems from sea level up to elevations of ¢. 2200 m. The Woolly False Vampire Bat is apparently sensitive to human disturbances, although it is locally rare, and lower availability of roosts and foraging habitats could mirror such effects.

Food and Feeding. The Woolly False Vampire Batis primarily carnivorous and eats a wide variety of birds, including doves, ant shrikes, tanagers, solitaires, and warblers; some gekkonid lizards; mammals such as mouse opossums, shrews, and mice; and smaller bats. It also eats fruits, cerambycid and scarabeid beetles, and sphingid moths. It uses acoustic cues emitted by prey such as shuffling through the forest floor, gnawing,etc. After capturing prey, the Woolly False Vampire Bat wraps it in its wing membranes,locks it with thumb claws, and delivers a killing bite, typically on top or back of head or throat. Prey is usually consumed from the head down, discarding bony areas such as wings, feathers, beaks, and parts of internal organs such as intestines and stomach. As a foliage-gleaning carnivore, the Woolly False Vampire Batrelies on relatively undisturbed forests to survive.

Breeding. Available evidence suggests that the Woolly False Vampire Bat is monoestrous, with births peaking around onset ofrainy season, but some reports from Brazil suggest aseasonal polyestry. In captivity, gestation is at least seven months. Females will copulate at 11-5-16 months of age. Litter size is one. A neonate had a body mass of 32% that of its mother and 47% ofits mother’s forearm length—the largest neonate among seven species of phyllostomids assessed. At 43 days of age, young had attained 82% of an adult weight and 99% of an adult forearm length. Pieces of solid food handled by mother were ingested by young at 65 days of age, and by 95 days,all food consumed was solid.

Activity patterns. Woolly False Vampire Bats are nocturnal and active most of the night. They spend an average of five hours per night outside of the roost, with the longest absence reaching ten hours. These periods can include use of alternative night roosts. They roost inside caves, buildings, archaeologicalsites, hollow trees, and hollow termite nests and form colonies of up to seven individuals.

Movements, Home range and Social organization. Foraging area ofa radio-tracked female in Costa Rica was 4 ha of swamp forest near her roost in a hollow tree. In Belize, radiotracked individuals in a small 30ha isolated tract of rainforest surrounded by farmland left the roost after it was dark outside, c.1 hour after sunset. They apparently avoid flying in heavy rain. Individuals most often remained close to their roost, an abandoned Mayan temple subjected to some disturbance. During 20 nights of monitoring, an individual left the small forest patch only three times and moved to an unknown area c. 3 km from the original forest patch. These marked individuals mostly moved 25-50 m and remained there for 5-10 minutes. Radio-tracking data from individuals in Campeche, Mexico, indicated almost no differences in these values; average home range was a little more than 100 ha, with core foraging area less than 4 ha. These individuals strongly preferred semideciduous forests (80%), followed by secondary forest (c.18%) and agriculturefields (less than 1%). In general, these individuals avoided flying through savanna or low closed forest. Colonies contain 1-7 individuals, but most frequently fewer than five individuals, and usually have an adult male, one or more adult females, and young-of-the-year or from previous years. It is unclear whether mating system is harem-based or monogamous. Woolly False Vampire Bats can share their roost, especially caves and archaeologicalsites, with many other bat species such as Least Sac-winged Bats ( Balantiopteryx io ), Lesser Dog-like Bats ( Peropteryx macrotis ), Davy’s Naked-backed Bats ( Pteronotus davyi ), Common Mustached Bats (P parnellw), Common Vampire Bats ( Desmodus rotundus ), Pallas’s Long-tongued Bats ( Glossophaga soricina ), Greater Spear-nosed Bats ( Phyllostomus hastatus ),Jamaican Fruiteating Bats (Artibeusjamaicensis), and Brazilian Free-tailed Bats ( Tadarida brasiliensis ), among others.

Status and Conservation. Classified as Least Concern on The IUCN Red List. Some countries (e.g. Mexico) have listed the Woolly False Vampire Bat as threatened in their federal legislation becauseit is considered sensitive to habitat disturbance. 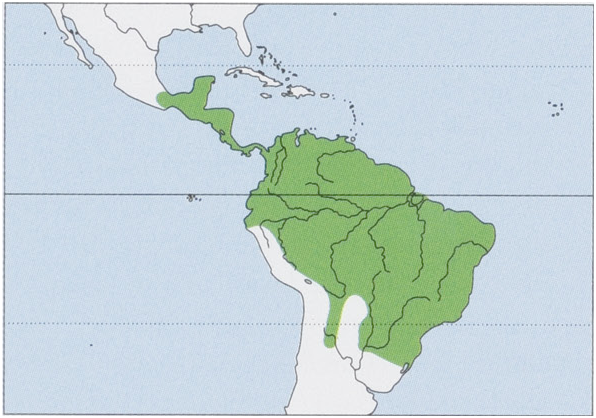