No other specific measurements are available. Peracchi’s Nectar Bat is medium-sized, with brown and silky long dorsal fur and pale brownish ventral fur. Contrast between dorsal and ventral pelage is not pronounced. Hairs have medium brown bases and pale brown tips, often subtle to distinguish. Wing membranes are brown and overall naked, but proximal part of dorsal surface of forearm is covered with fur. Snout is elongated and narrow, and dentition is reduced. Spear of lancet of noseleaf is relatively large for a species of Lonchophylla and has indistinct central rib. Posterior margin of horseshoe of noseleaf is continuous with lowerlip. Tragusis rounded attip, and uropatagium is short. Skull is elongated, and nasals and supraorbital and postorbital areas are smooth and not inflated. Mesopterygoid fossa is long, pterygoid processes are narrow, and basisphenoid pits are shallow. Zygomatic arches are absent, and coronoid processes of lowerjaw are low, with rounded tips. I' are large, spatulated, procumbent, and separated from I* by diastemata. I? are small and pointed. Conspicuous grooveis present on anterior surface of C'. Upper premolars are triangular. P* is narrow, with reduced inner lobe and lingual root posteriorly displaced. Mesostyles, metastyles of M' and M?, and parastyle of M' are all poorly developed or absent. Reduced parastyle of M'is oriented laterally. Chromosomal complement has 2n = 28 and FN = 50, and autosomes are composed of twelve pairs of metacentric or submetacentric autosomes and a small pair of acrocentric autosomes. X-chromosome is metacentric, and Y-chromosome is acrocentric.

Activity patterns. Peracchi’s Nectar Bats were captured using ground-level mist nets set in clearings, borders, and forests, with in some close to flowering trees (M. paradisiaca and B. forficata).

Status and Conservation. Classified as Least Concern on The IUCN Red List. Peracchi’s Nectar Bat has been recorded mostly in protected areas of Atlantic Forest (e.g. Serra do Mar State Park, 1353 km?® of Atlantic Forest), a biome that is highly threatened in Brazil and one of the most threatened of the world. 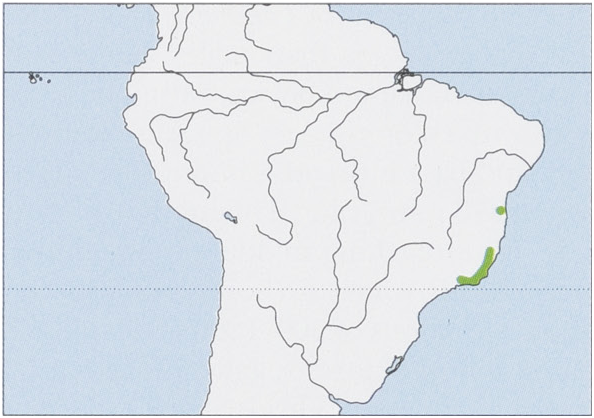