Austrolebias lourenciano   is distinguished from all other species of the A. adloffi   species group by one unique nucleotide substitution along the cytb alignment: cytb.457 (T> G) ( Fig. 2S View FIGURE 2 ). It is distinguished from A. aff. minuano   1 and from its sister clade (which contains A. aff. minuano   1 and A. cheffei   ) by this and other two nucleotide substitutions: cytb.133 (A> C) and cytb.595 (C> T).

Scales cycloid. Body and head entirely scaled, except for anteroventral surface of head. No scales on dorsal fin base, one irregular row of scales at anal fin base, and 2–3 rows of scales at caudal-fin base. Frontal squamation F, G or H patterned, sometimes irregularly arranged; E-scales slightly overlapping medially. One or two supra-orbital scales. Lateral line of trunk complete, with one neuromast per scale. Longitudinal series of scales 25–29; transverse series of scales 11–13; scale rows around caudal peduncle 14–16. Contact organs throughout antero-ventral part of flank in males. Row of minute contact organs in the 2–4 uppermost pectoral-fin rays in males. No contact organ on pelvic, dorsal and caudal fin.

Habitat notes. Austrolebias lourenciano   occurs in temporary wetlands with dense aquatic vegetation directly exposed to sunlight ( Fig. 8 View FIGURE 8 ). Temporary wetlands inhabited by A. lourenciano   usually dry in late spring and early summer, between November and December and flood again in early autumn between April and May, however, there is some variation from year to year depending on the intensity of the annual precipitations. The pools range from 20 to 50 cm in depth and have a muddy substrate. The areas from where the species was recorded are located at the edge of the riparian forest of the Arroio Pinto. The species was recorded co-occurring with another species of Rivulidae   , Austrolebias aff. gymnoventris   , in samples taken in 2014, although the last species was no longer recorded in the area after a portion of the type locality was drained. Non-annual fish species recorded syntopically with the new species were Corydoras paleatus (Jenyns, 1842)   , Phalloceros caudimaculatus (Hensel, 1868)   , Jenynsia lineata (Jenyns, 1842)   and Cheirodon ibicuhiensis Eigenmann, 1915   .

Etymology. The species name is derived from Portuguese adjective “lourenciano”, which is as the inhabitants from São Lourenço do Sul, a municipality in the state of Rio Grande do Sul, situated on the shores of the Laguna dos Patos, are known. The name lourenciano   is a reference to the occurrence of the new species in this municipality. A name in apposition.

Conservation status. The species was relatively abundant in its type locality. However, in 2015 a portion of the wetland was drained ( Fig. 8 View FIGURE 8 ), reducing the flooded area. After the partial drainage of the temporary pool, a visible reduction in the density of the species was observed in subsequent years. In the second location where the species was recorded, on the opposite bank of the Arroio Pinto, there are small, shallow pools scattered in a pastureland, where few specimens are usually found. Both locations are subject to grazing and trampling by cattle. The species currently has an occupation area of less than 1 ha, with a low population density and suffers from the reduction in the quality of its habitat. Moreover, if measures to conserve the area of occurrence of A. lourenciano   are not taken, it is possible that the owner will carry out new interventions that will further reduce the distribution of the species. Thus, following the IUCN (2019), A. lourenciano   presents a reduced (AOO <10,000 m ²) and severely fragmented (a) area of occurrence and is experiencing continued decline (b) in the area of occupancy (ii) and in the quality of habitat (iii). Austrolebias lourenciano   should be considered a “Critically Endangered” species under the category CR B2ab (ii, iii), and as such, the species should be included in future lists of the endangered fauna from Brazil. 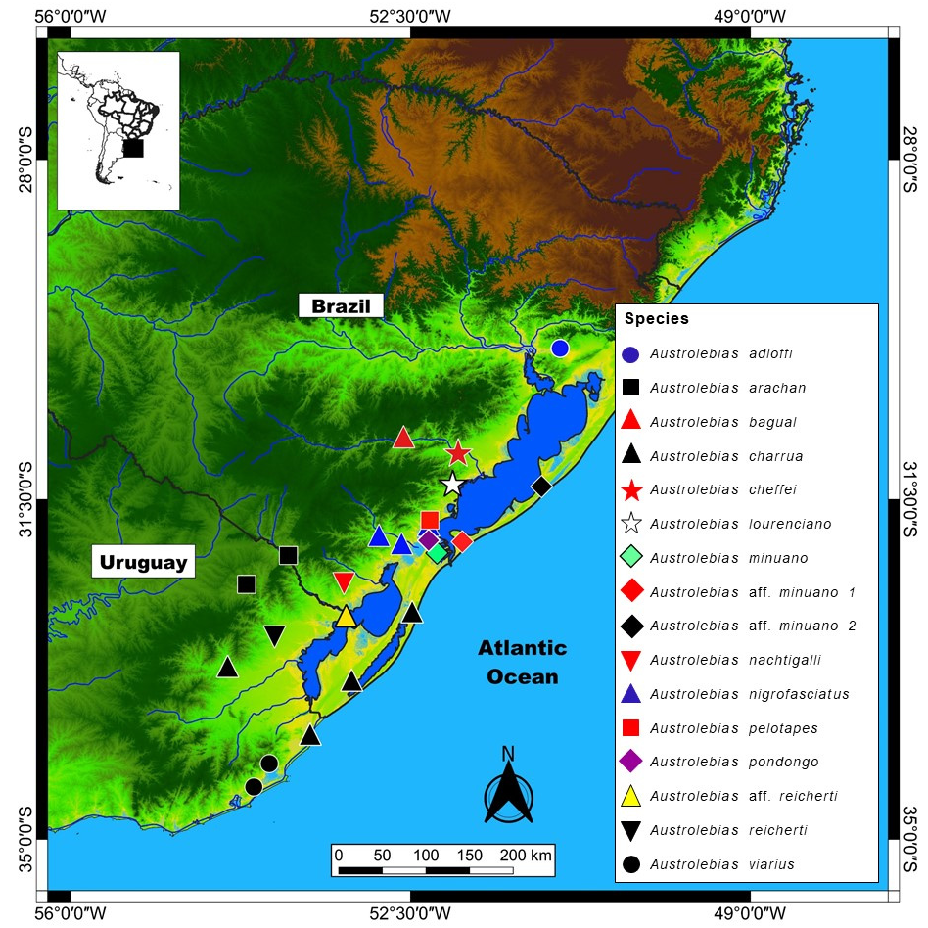 FIGURE 3. Geographic distribution of the species of the Austrolebias adloffi species group in Rio Grande do Sul, southern Brazil, and Uruguay, including the type locality of A. cheffei and A. lourenciano. Each point can represent more than one locality. FIGURE 5. Colour variation of males topotypes of A. lourenciano (not preserved) captured in temporary pool in the floodplain of Arroio Pinto, southern Brazil. Photos by Matheus Volcan. FIGURE 6. Largest paratype male (40.2 mm SL, MCP 54439) (A), and male with inverse ground color pattern in the posterior region of body (B) of A. lourenciano, São Lourenço do Sul, Rio Grande do Sul, Brazil. Photo by Matheus Volcan. FIGURE 7. Variation in color pattern of females topotypes (not preserved) of A. lourenciano collected in the floodplain of Arroio Pinto, Laguna dos Patos basin, Rio Grande do Sul, Brazil. Photo by Matheus Volcan. FIGURE 8. Type locality of A. lourenciano, before (A) and after (B) the digging of a ditch for the drainage of the wetland in August 2015, which resulted in a great impact for the population and reduction in the flooded area. (C) Wetland on the opposite bank of the type locality, in the floodplain of Arroio Pinto, where the second population of A. lourenciano occurs, recorded in August 2015 and the same area during the drought period (D) in December 2019. Photos by Matheus Volcan.