Remarks. Marcusadorea tubulosa is characterized by large zooids, approximately 1.20 mm in length in Caribbean specimens ( Canu & Bassler 1928), a thin-walled proximally incomplete peristome surrounding the orifice, and a large proximal suboral avicularium placed laterally on the rim of the peristome. Canu & Bassler (1928) noted that the budded zooids of M. tubulosa are distinct from those of other species of Holoporella Waters, 1909 (= Celleporaria Lamouroux, 1821 ). They noted similarities with the peristome of Coleopora species , which lack attachment marks around the operculum. They considered their material as an undetermined genus owing to the absence of ovicells and the growth mode of the colonies in which frontal budding is lacking occur. However, their plate clearly illustrates ovicells ( Canu & Bassler 1928: pl. 26, fig. 6), the presence of which we confirmed by the examination of a paratype of Holoporella (?) tubulosa deposited in the United States National Museum (USNM 7532). The examination of this material also revealed that in some zooids there is a proximal suboral avicularium placed laterally on the peristome, occupying one third of it, and globular ovicells opening inside the peristome, as in the Brazilian material figured herein ( Figures 13– 14 View FIGURES 12–15 ).

Prior to the original description of the genus Coleopora, Canu & Bassler (1925) described the Austrian fossil species Coleopora tubulosa , later regarded by David & Pouyet (1974) as a junior synonym of Coleopora insignis ( Reuss, 1874) .

Teuchopora sp. recorded by Banta & Carson (1977) from Costa Rica resembles Marcusadorea tubulosa in general dimensions, frontal-shield formation, orifice, and the hemispherical aperture of ovicell opening into the base of the peristome, but it apparently lacks avicularia.

Among the type material of M. tubulosa were found erect colonies, comprising cylindrical bifurcated branches, figured by Canu & Bassler (1928: pl. 24, figs 1, 4–5). Erect cylindrical colonies have also been collected from Bahia state, northeastern Brazil ( Figure 15 View FIGURES 12–15 ). The detached erect colony has irregular to oblong autozooids, somewhat erratically disposed along the axis; the avicularia are unusual ( V. E.S. Almeida pers. comm. 2009), as in specimens from Albatross Station 2319 (J. Sanner pers. comm. 2009), and are infrequent, as in encrusting specimens collected in Alagoas. Both forms of colonies found in Brazil have similar-sized zooids, orifices and avicularia . 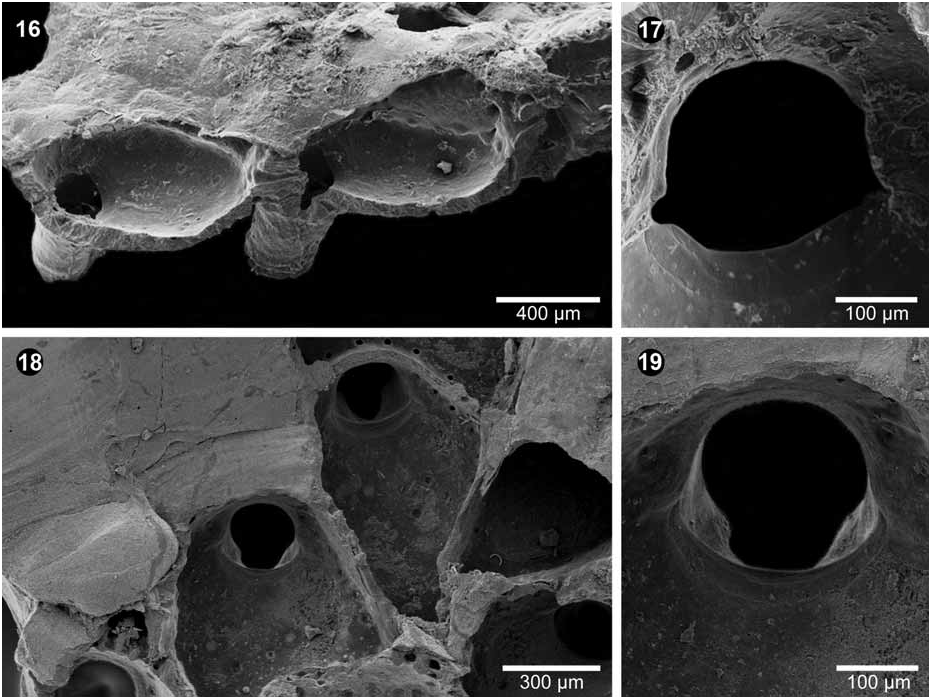