Diagnosis. Fore wing areolet absent, small or large; propodeum either with median longitudinal carina or carina absent, but never with any indication of an areola, surface smooth to coarsely rugose; T1 usually parallel-sided or narrowing posteriorly; T2 either transverse rectangular, subtriangular, broadly pentagonal or almost linear; hypopygium medio-longitudinally folded with several striae (as in Apanteles   ), degree of striations variable to the point where hypopygium has only faint lateral creases; ovipositor sheaths from about half as long as metatibia to longer.

Remarks. Choeras   is a cosmopolitan genus, with nearly 60 species described worldwide ( Yu et al. 2016; Fagan-Jeffries & Austin 2018; Ghafouri Moghaddam et al. 2018). There are currently nine species described from Australasia: C. calacte ( Nixon 1965)   , C. ceto ( Nixon 1965)   , C. dissors ( Nixon 1965)   , C. epaphus ( Nixon 1965)   , C. helespas Walker (1996)   , C. koalascatocola Fagan-Jeffries & Austin (2017)   , C. morialta Fagan-Jeffries & Austin (2017)   , C. papua ( Wilkinson 1936)   , and C. tegularis ( Szepligeti 1905)   . The genus is likely to be paraphyletic ( Williams 1988; Austin & Dangerfield 1992), with the Australian fauna forming two main clades in a recent molecular study ( Fagan-Jeffries et al. 2018b); one clade including species possessing a small, slit-like fore wing areolet, and a second clade of species with a large fore wing areolet that includes species appearing to be morphologically intermediate between Choeras   and Sathon ( Fig. 1 View FIGURE 1 ). It is clear that the genus needs to be revised, however, a world-wide sampling effort and inclusion of several morphologically-related genera such as Sathon and Lathrapanteles Williams would be required for a detailed treatment that does not cause further confusion to generic boundaries in the Microgastrinae. As such, we here place species from both of the Australian molecular clades (with fore wing areolet both large and small) into Choeras   , but present detailed descriptions, images and molecular data, so that they can be more easily assessed in future studies. For the Australian fauna, we provisionally separate Choeras   and Sathon based on form of the hypopygium (sensu Austin & Dangerfield 1992), with the species that we place in Choeras   possessing a hypopygium with at least some flexibility, medial folds, or striation, whilst the species we place in Sathon has a completely inflexible hypopygium. The distribution of two of the new species of Choeras   are restricted to a single collection locality in Tasmania, whilst the third species has a broad distribution across south-western Australia ( Fig. 2 View FIGURE 2 ).

We here formally recognise the corrected species name Choeras ceto (Nixon)   , which was mistakenly changed to Choeras cetus   by Austin and Dangerfield (1992). 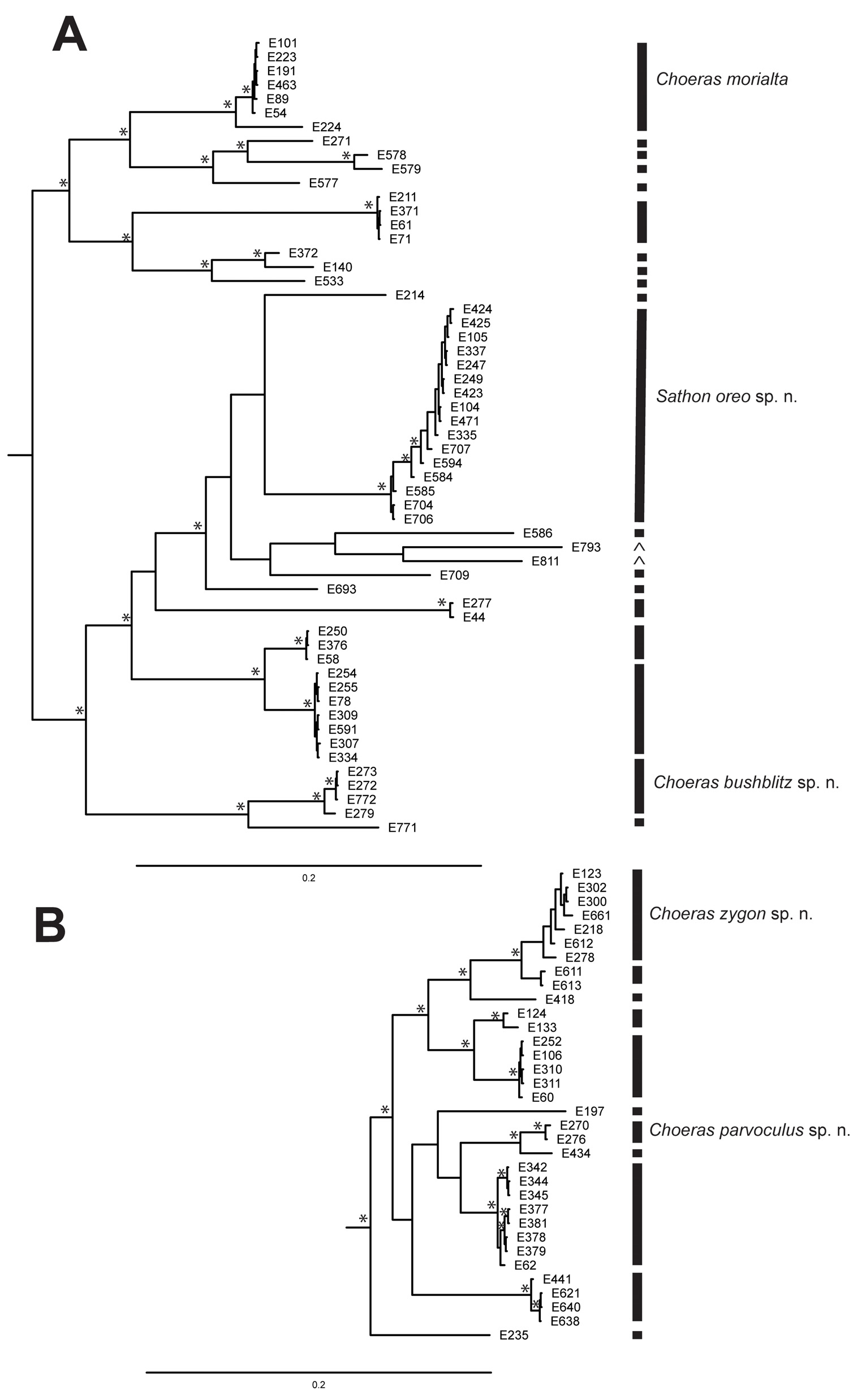 FIGURE 1. A) The clade of specimens morphologically identified as either Choeras or Sathon (i.e. possessing either a solid hypopygium or a flexible hypopygium, respectively) with a large fore wing areolet, and B) the clade of Choeras specimens with a small fore wing areolet. Clades are isolated from a larger concatenated COI and WG Bayesian tree of Microgastrinae. * indicates nodes with ± 95% posterior probability support. The consensus species delimitation hypothesis as determined in Fagan-Jeffries et al. (2018b) is indicated with bars to the right of the tree. ^ indicates the specimen was newly sequenced since Fagan-Jeffries et al. (2018b). These clades (A and B) are not closely related in the larger phylogeny, but there is limited support in the connecting nodes. Refer to Fagan-Jeffries et al. (2018b, figure 4b) for a simplified version of the complete phylogeny depicting the relationships among genera, including between these two Choeras clades. FIGURE 2. Known distribution of the three new Choeras species described in this study.