The contracted zooids are solitary and almost cylindrical, to 5 cm long, although the relaxed specimens could be at least twice that length. The test of the preserved specimens is whitish and translucent, that of the thorax being particularly thin and delicate while the abdominal test is thick and firm. Thoraces are especially contracted and often are severed from the abdomen as a result of contraction into a relatively tight almost spherical mass. The abdomen remains stretched out and securely fixed in the firm test of the posterior end of the body. Only two thoraces, both tightly contracted, were present in the available material. Both apertures are six-lobed with small yellow spots between the bases of the lobes. The branchial aperture is terminal and the atrial opening is a short distance down the dorsum. The thoracic muscles in these contracted specimens number about 12 broad longitudinal bands on each side. At least six extend ventrally from the branchial siphon and divide into separate fibres along each side of the endostyle where they join into a ventral longitudinal band on each side. Each of these bands joins with about six broad dorsal longitudinal muscles (half from between the siphons and the other half from the atrial siphon) to form a single longitudinal band along each side of the mid-dorsal line of the abdomen, converging posteriorly to terminal horns on each side of the fine vascular stolon that projects into the test at the posterior end of the zooid.

At least 50 inner longitudinal vessels extend the length of the branchial sac on each side, and there are at least 50 rows of about the same number of stigmata, although the exact number is obscured by contraction.

The gut forms a simple vertical loop tightly embedded in the abdominal body wall. Neither structural folds in the stomach nor gonads were detected.

As in other genera of the Diazonidae   , the homogenous genus Rhopalaea   has independently opening six-lobed apertures, inner longitudinal vessels (supported on papillae) extending the length of the large branchial sac (which has many stigmata in numerous rows), gonads (including a tubular ovary) in the vertical gut loop (which is tightly enclosed in the opaque abdominal body wall). The genus probably is oviparous. It contains 11 confirmed species (including the present one) and is distinguished from other genera in the family by the solitary habit of most of its species. However some may be colonial, although this is not confirmed and the budding mechanism is not known.

Monniot and Monniot (2001) assigned specimens to R. crassa ( Herdman, 1880)   on the basis of their thick opaque test. However, this is a condition that Kott (1990a) observed to occur only in older specimens, probably with regenerated thoraces, and it does not appear to be a species characteristic, but rather one of growth and maturity. This species from the tropical western Pacific (and its synonyms including R. perlucida Monniot, 1997   , see Kott 1990a, 2003) and R. abdominalis ( Sluiter, 1898)   from the tropical western Atlantic are both solitary species with longitudinal muscles terminating in short branches along the mid-dorsal and the mid-ventral lines on the thorax and not continuing on to the abdomen. The specimens assigned to R. crassa   by Monniot and Monniot (2001) may have been misidentified for although they lack abdomina, dorsal muscles at least appear to extend posterior to the thorax and although short terminal branches are along each side of the midventral line, similar branches are not present along the mid-dorsal line (as they are in R. crassa   ). Rhopalaea cloneyi Vasquez and Young, 1996   from the coastal waters of the northeastern Pacific (with numerous fine pleats in the stomach wall), R. tenuis ( Sluiter, 1904)   from the tropical western Pacific (in which stomach folds have not been detected), and R. birkelandi Tokioka, 1971   from the tropical eastern Pacific (distinguished from the two latter species by its large number of longitudinal muscles), are all solitary with a pair of muscles which terminate each side of the mid-dorsal and mid-ventral lines (as in R. crassa   ). Rhopalaea desme Monniot and Monniot, 2003   (from 100–500 m off Vanuatu and Fiji) has an ephemeral posterior abdomen and similar muscles to Syndiazona chinensis Tokioka, 1955   , but its zooids are connected only by basal stolons and are not embedded in common test as they are in S. chinensis   . Rhopalaea circula Monniot and Monniot, 2001   from the tropical western Pacific also has zooids connected by basal stolons and has paired longitudinal muscles on the abdomen and a posterior abdomen has not been reported. This species is distinguished from R. desme   by its numerous thoracic muscles which terminate each side of the mid-dorsal and mid-ventral line (as in R. crassa   ). Rhopalaea hartmeyeri Salfi, 1927   from the Mediterranean may also be colonial and has a posterior abdominal stolon but longitudinal muscles have not been detected on the abdomen. The solitary R. neapolitana Philippi, 1843   (also from the Mediterranean), the type species of the genus, resembles R. crassa   , lacking muscles on the abdomen (see Salfi 1928).

Monniot (1969) could not detect inner longitudinal vessels in the juvenile thoraces of R. nordgaardi Hartmeyer, 1922   that he examined and he assigned the species (together with its synonym ( R. norvegica   Arnbäck-Christie-Linde, 1925)) to the genus Tylobranchion   . However, Millar (1966) found these vessels (albeit sometimes interrupted) in the material he examined and the species (from the northeastern Atlantic to 400 m) appears to have been properly assigned to the genus Rhopalaea   . It is either solitary, or its zooids are joined by stolons or embedded, its stomach wall has numerous fine longitudinal folds, and muscles are not known to extend on to the abdomen.

Rhopalaea piru Monniot and Monniot, 1987   , from French Polynesia, is colonial with embedded zooids and is wrongly assigned to Rhopalaea   . It appears to be a junior synonym of Syndiazona chinensis Tokioka, 1955   (see Millar 1975; Kott 1990a).

Monniot and Monniot (2003) reported numerous buds in the basal test of Fijian specimens of R. desme   . However, there is no evidence that these are actually buds, nor are buds known to develop in the terminal ampullae of vascular stolons in the Diazonidae   , although they do in the Clavelinidae   . The Fijian specimen has muscles on a posterior abdomen as well as the thorax and abdomen, a characteristic that distinguishes it from clavelinid zooids and its affinities are not understood.

The present species appears to have some affinity with the tropical R. circula   although the latter species appears to be colonial, has more longitudinal muscles and stigmata, and is geographically isolated. The distinction between the present species and Rhopalaea tenuis   is less obvious. Twenty fine longitudinal muscles, half from the branchial siphon and half from the atrial siphon, are recorded for R. tenuis   , about twice the number detected in the single thorax that is available for the present species. However, this could be affected by contraction, which draws muscle bands together, reducing their apparent number. Nevertheless, the present species, although a similar size to R. tenuis   , has more stigmata per row and more (about 100) rows, and until more data become available, is considered not to be conspecific. The recorded location for the present species is the most southerly record for this genus in which (with the exception of R. cloneyi   from the north-eastern Pacific, R. neapolitana   from the Mediterranean, and R. nordgaardi   from the north-eastern Atlantic) most known species are tropical. 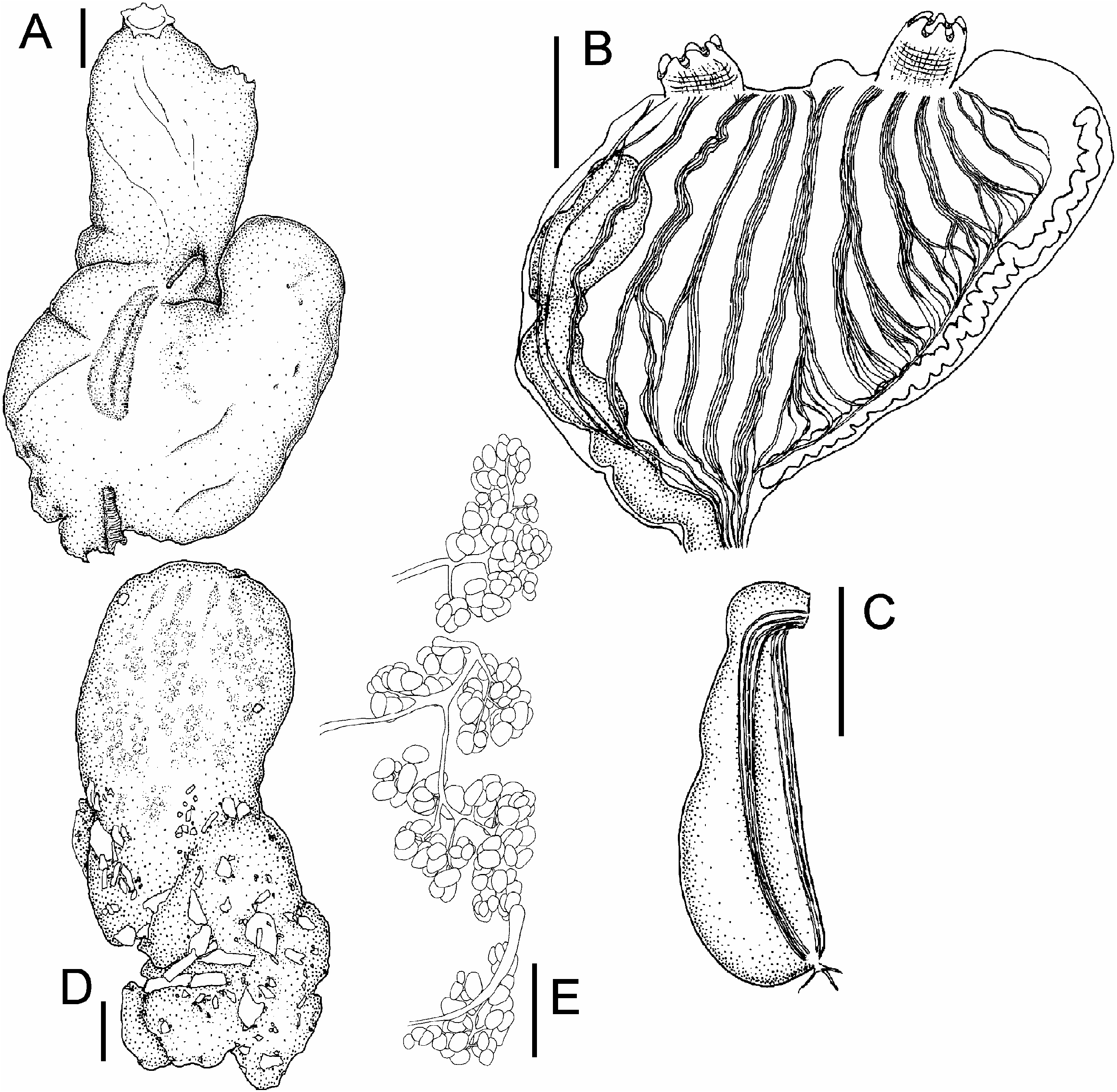