IDENTIFICATION: Saccopteryx leptura   can be distinguished from other congeneric species by

Ascorra et al. (1993), Fleck et al. (2002), and Medina et al. (2015) correctly identified their material from Jenaro Herrera, Nuevo San Juan, and Quebrada Lobo, respectively, as Saccopteryx leptura   . The voucher material from the Yavarí- Ucayali interfluve conforms to previous descriptions of the species, and measurements fall within the range of size variation previously documented for the species.

REMARKS: Several captures of Saccopteryx leptura   from our region are unaccompanied by ecological information, but one specimen from Jenaro Herrera was taken in a ground-level mistnet in a clearing, and another is said to have been collected 1.5 m above the ground as it roosted on a palm ( Bactris sp.   ) frond in primary forest. All our specimens from Nuevo San Juan were collected at roosts (table 11), usually in shaded but exposed situations on standing trees; exceptionally, one roosting group was found beneath an unmodified leaf of the giant herb Phenakospermum guyannense   ( Strelitziaceae   ). Three roosts at this locality were in well-drained (hilltop or hillside) primary forest, three others were in seasonally flooded forest, and two were in old secondary vegetation; recorded heights of roosting groups were 2–8 m above the ground. Saccopteryx leptura   was not found roosting with any other bat species near Nuevo San Juan.

Most of the roosts of Saccopteryx leptura   that we found near Nuevo San Juan correspond closely to those previously reported elsewhere (e.g., by Bradbury and Emmons, 1974; Simmons and Voss, 1998). In general, these can be characterized as shallow, vertically oriented concavities that are better illuminated than those typically occupied by its sympatric congener S. bilineata   ; unlike Rhynchonycteris naso   , which also roosts in exposed situations on standing trees, Saccopteryx leptura   is not known to roost over water. 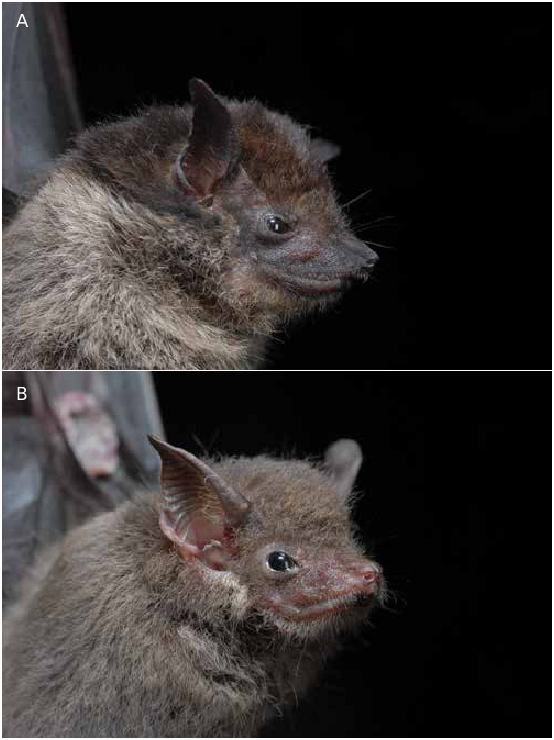