Diagnosis and comparisons. A species assigned to the genus Rhombophryne  on the basis of molecular phylogenetic affinities ( Fig. 3View FIGURE 3), and the possession of a clavicle combined with the absence of T- or Y-shaped terminal phalanges (vs. either absence of a clavicle or possession of a clavicle combined with T- or Y-shaped terminal phalanges in the morphologically similar Plethodontohyla  ). Within the genus Rhombophryne  , it is assigned to the R. serratopalpebrosa  group on the basis of possessing superciliary spines and molecular phylogenetic data ( Fig. 3View FIGURE 3).

Description of the holotype. ( Figs 4View FIGURE 4, 5View FIGURE 5) An adult female specimen in a very good state of preservation. Tissue taken from the left thigh for genetic sequencing. A transverse incision present in the posterior abdomen.

Body robust. Head wider than long (HW/HL = 1.59). Pupils round. Snout rounded in dorsal and lateral views. Canthus rostralis concave. Loreal region slightly concave. Nostril nearer to snout tip of than to eye (END/NSD = 0.47), directed laterally, slightly protuberant. Internarial distance greater than distance from eye to nostril. Tympanum indistinct, TDH/ED = 0.64. Supratympanic fold weak, extending from the middle back of the eye over and behind the tympanum toward the axilla. A small granular bump is present posteroventral to both tympana. Three superciliary spines above each eye, the anterior two roughly equal in size, the posterior-most almost imperceptible without magnification. Vomerine teeth present, in straight rows either side of the palate, separated medially by a small gap. Tongue broad and unlobed, attached anteriorly.

Colouration of the holotype: After two and a half years in preservative, dorsal body colour is dark brown flecked with black—in life, the body was a more reddish brown ( Fig. 11View FIGURE 11 a). The posterior half is lighter in colour than the anterior, particularly around the midline. Two light-brown lines run posteromedially from the eyes, approaching one another toward the midline but ending in the suprascapular region. These lines merge anterolaterally at the posterior of the eye with the lighter flank colouration, extending onto the lateral portions of the head. A whitish line runs from the posterior edge of the eye to the corner of the mouth. The arms are dorsally light brown flecked with black. The legs are dorsally light brown, with one dark crossband on the thigh, two on the shank—the proximal of which is less distinct than the distal—one on the tarsus, one on the metatarsals, and some black spots on the toes.

The ventral surface is cream, with a little brown speckling on the chin and below the insertions of the arms. The legs are ventrally flecked with light brown and cream. The iris is gold with black reticulations and a black periphery.

Variation. Morphologically, ZSM 1628/2012 agrees strongly with the holotype. Its tympanum is slightly smaller (TDH/ED = 0.59), and its tibia shorter (TIBL/SVL = 0.44). Its colouration is starkly different, however. Dorsally, it is uniformly an earthy brown. Crossbands on the shanks are faint but present, as is the light line running between the corner of the mouth and the posterior of the eye. Based on colour photographs ( Fig. 11View FIGURE 11), UADBA-A 60289, which is female, also closely agrees in morphology with the rest of the type material. Its colouration is roughly intermediate between the other specimens, its dorsum being muddy brown flecked with white and black spots; a pair of small white spots being present between the anterior edges of the eyes, and again between the posterior edges, as well as over the suprascapular region. Its inguinal region is a yellowish cream. The crossbands on its legs are as in the holotype.

Etymology. The specific epithet diadema  is the latinized Greek word for diadem, a small crown typically worn by female royalty. It refers to the superciliary spines borne by this species. It is a feminine nominative singular noun in apposition.

Natural history. Individuals of this species were captured when active during the day jumping among the leaflitter or near pitfall traps, suggesting a terrestrial, possibly partially fossorial lifestyle. The holotype contained at least 13 well-developed, yellow eggs (diameter 2.45 ± 0.25 mm), suggesting that the species was reproductively active at the end of November, around the start of the rainy season.

The montane rainforest of Sorata is under high human-disturbance pressure, especially due to the high number of zebu cattle, which are responsible for widespread forest disturbance in the area. The area where the specimens of this species were discovered was exceptionally intact, with dense leaf litter.

Distribution and conservation status. This species is known only from high altitudes (1339–1407 m a.s.l.) in the forest of the Sorata Massif in northern Madagascar ( Fig. 8View FIGURE 8). This forest is unprotected and therefore threatened by deforestation and degradation without restriction. Additionally, species at high altitude may be threatened by climate change (Raxworthy 2008; Raxworthy et al. 2008), although this threat is most likely less imminent than that of deforestation. If this species is restricted to the Sorata Massif, then its extent of occurrence and optimistically estimated area of occupancy constitutes an area of only ~ 250 km 2 (calculated in Google Earth® Pro 6.1.0.500, Google Inc., Mountain View, CA). Due to its likely restriction to a small area of unprotected forest that is under threat from deforestation and possible long-term threat of climate change, R. diadema  sp. nov. qualifies as Endangered under the IUCN Red List Criteria (2012) B1ab(iii) as defined for R. guentherpetersi  above, similar to R. longicrus  , which was described from the same area ( Scherz et al. 2015b). 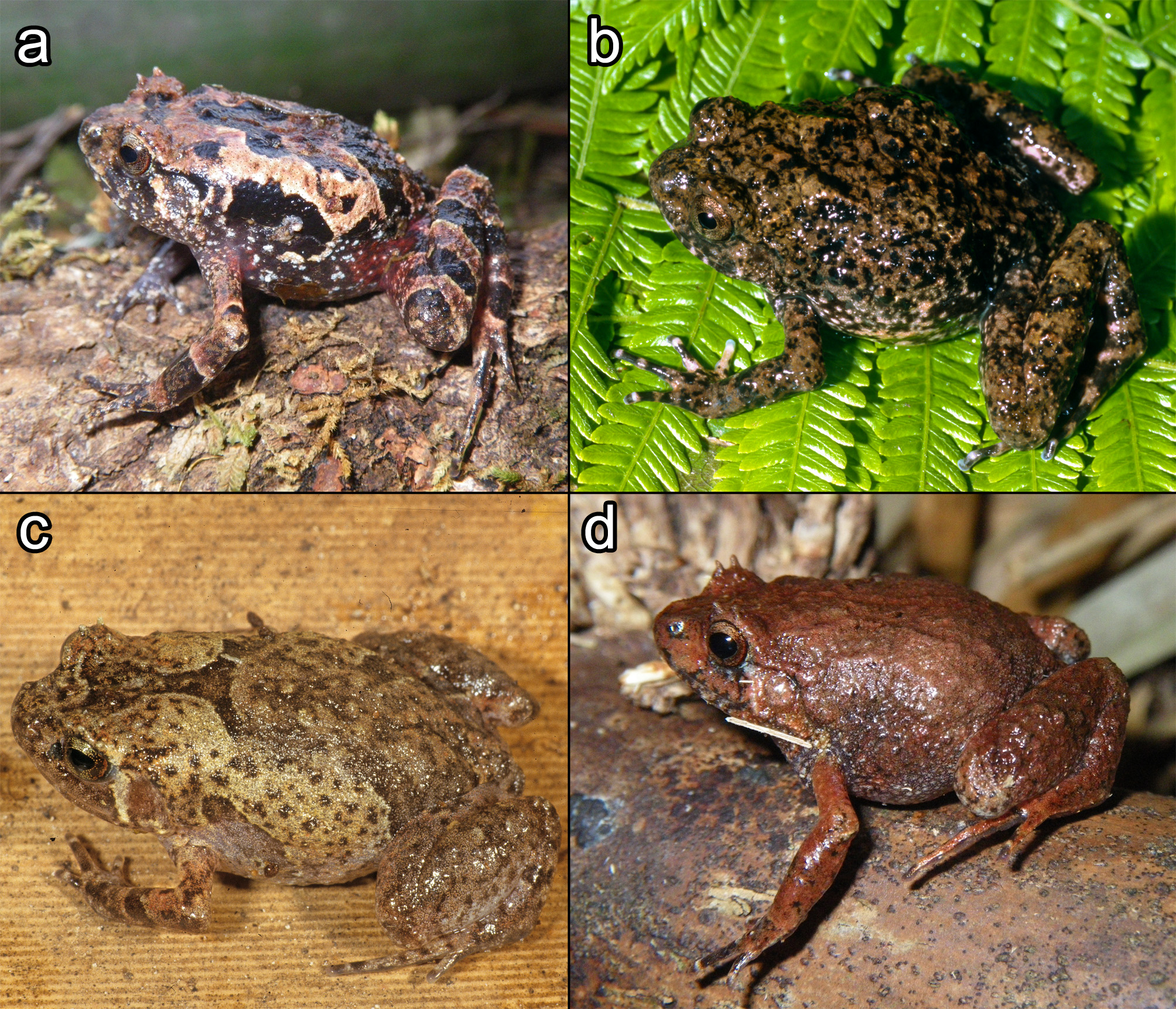 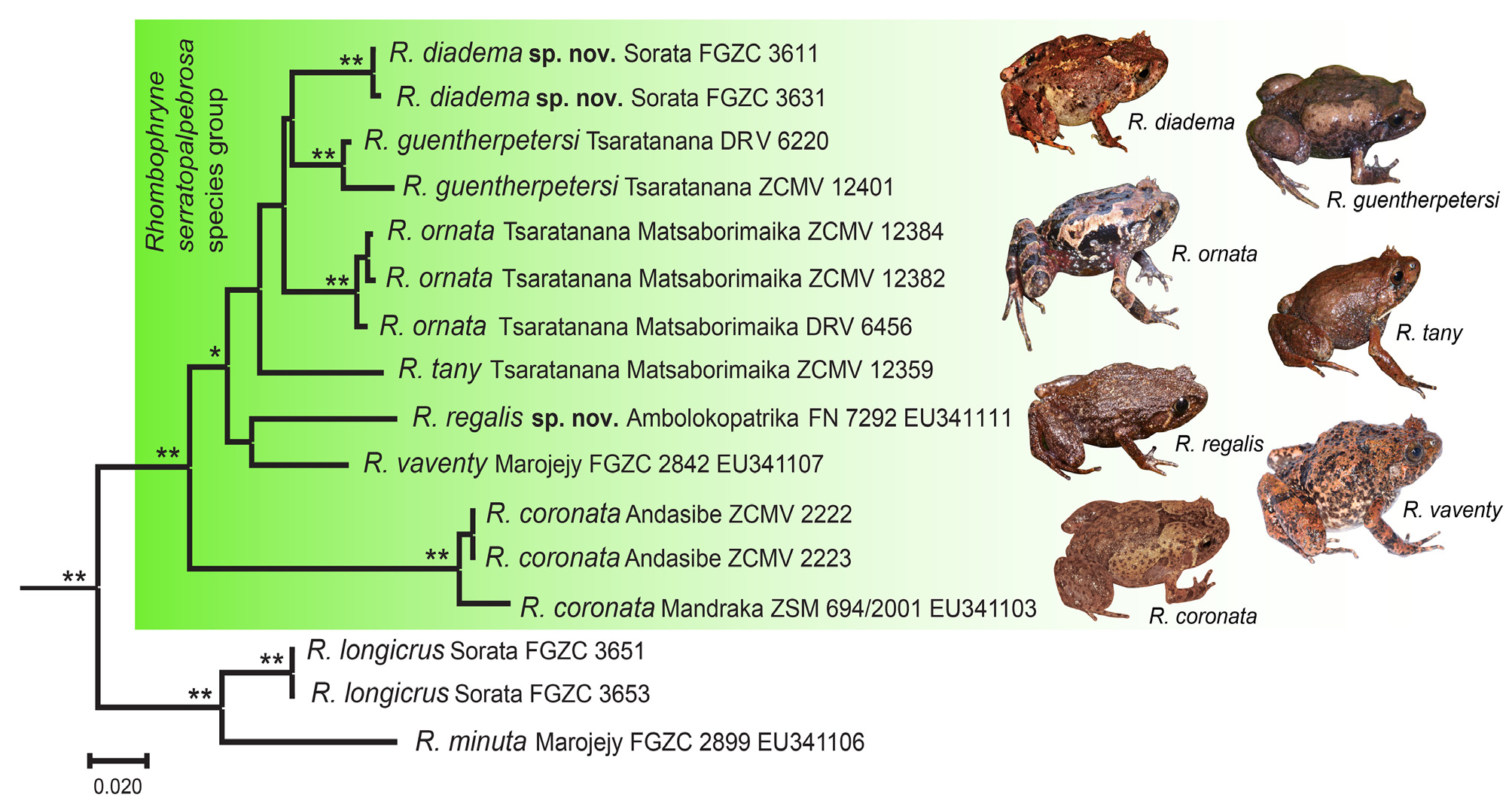 FIGURE 9. Rhombophryne regalis sp. nov. in life, showing the holotype (MRSN A 4602) in (a) dorsal and (b) ventral view; paratype MRSN A 4603 in (c) dorsolateral and (d) ventral view; and (e) an individual from Ambolokopatrika in dorsolateral view (assignment to field and collection numbers unknown).