Diagnosis. Females of Apopyllus  can be recognized by the long, convoluted copulatory ducts extending anteriorly to the copulatory openings, and by the presence of paramedian epigynal pockets and of an anterior ridge in the epigynum, which covers the copulatory openings ( Figs 1View FIGURE 1 A –B, 2A –B). Males can be distinguished from other gnaphosid genera by the shape of RTA, which is folded in an elaborated structure, by the long bifid membranous tegular extension (MTE) that supports the long coiled embolus, by a retrolateral incision on the cymbium, and by the presence of median apophysis on tegulum ( Figs 1View FIGURE 1 C –D, 2C).

Description. As in Platnick & Shadab (1984), except for the male and female genitalia, which are redescribed below, and for the presence of terminal pseudosegmentation of tarsi IV in both sexes ( Fig. 2View FIGURE 2 D). The female internal genitalia (vulva) of Apopyllus  are composed of a pair of highly convoluted copulatory ducts, a pair of secondary spermathecae (blind end receptacles with large glandular pores), a pair of primary spermathecae that are connected to a pair of fertilization ducts ( Figs 1View FIGURE 1 A –B, 2B). The copulatory ducts, though variable between and within species, have a basic structure shared by all species ( Figs 1View FIGURE 1 A –B). The copulatory opening leads to the proximal part of the copulatory duct (PPD) that is ventrally located and has a “U” shape. It curves dorsally and goes towards the posterior part of epigynum, forming the paramedian descendant tract (PDT). The PDT curves towards the anterior part, forming the lateral ascendant tract ( LAT). It extends anteriorly to the copulatory opening forming the anterior curled tract (ACT). The ACT leads to a ventral tract that goes posteriorly, called lateral descendent tract (LDT). It curves forming the lateral loop (LL) and then the paramedian ascendant tract ( PAT). The PAT curves dorsally leading to the terminal part of the copulatory duct (TPD), which ends at the primary spermatheca. The secondary spermatheca is a rounded blind sac of variable size that arises from the lateral loop.

Natural history. Species of Apopyllus  can be found in areas with rocky ground and, at least A. suavis  , might be active during daylight (GHFA personal observation). 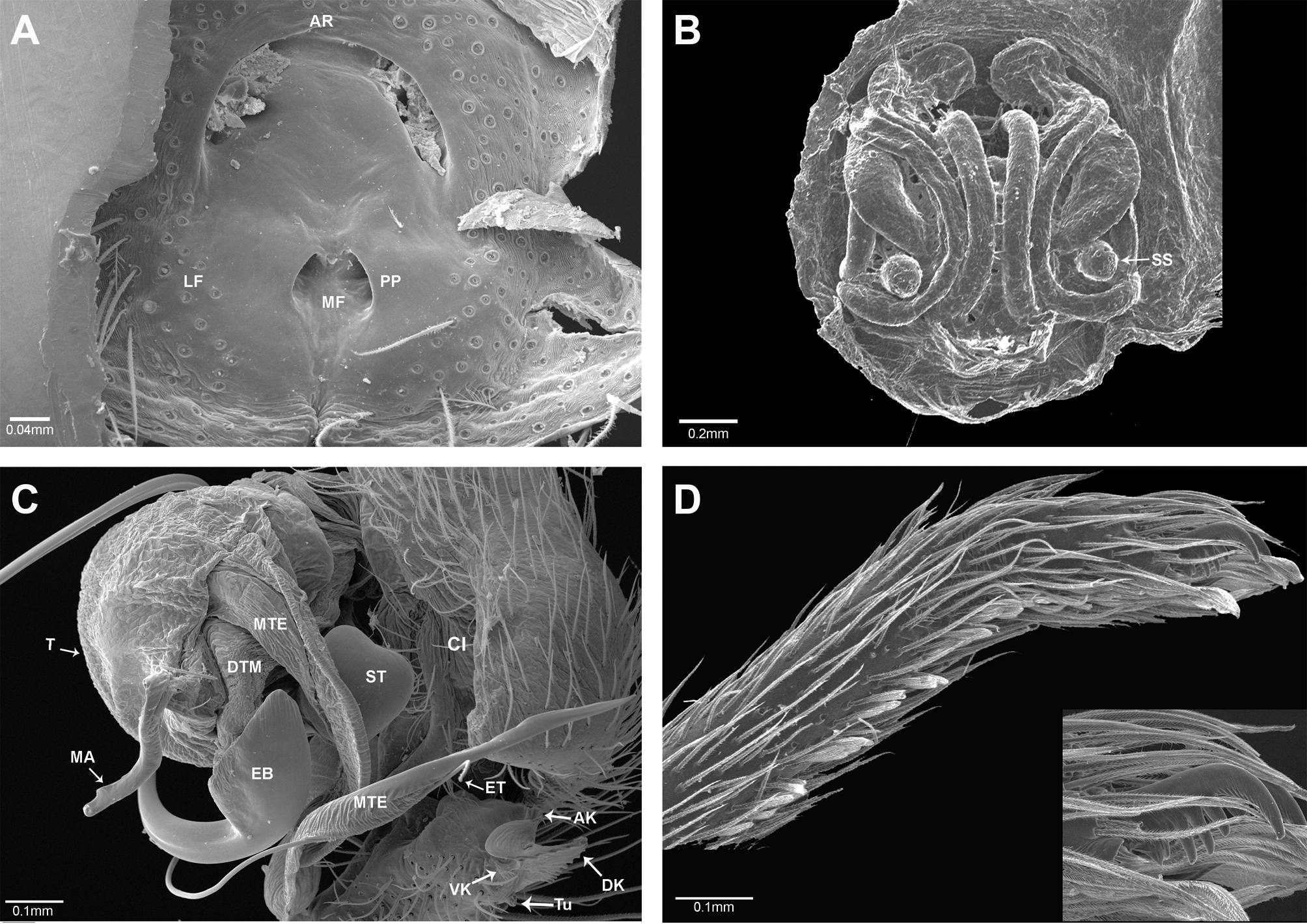