LOCALITY AND AGE: Upper Nomogen formation at Bayan Ulan (within the lower 3 m of the section), late Paleocene.

ETYMOLOGY: The trivial name is after that of the locality, Bayan Ulan.

DESCRIPTION: Association of the upper and lower teeth is based on their comparable sizes ( tables 1 View TABLE 1 , 2 View TABLE 2 ) and morphology. This association is supported by the fact that the left maxilla with M1–3 (V14126.2) and the fragmentary right mandible with broken m2–3 (V14127.3) were prepared from a single coprolitic nodule. The fragmentary maxilla shows that the posterior border of the hard palate is even with M2. The posterior margin of the palate bears a blunt, rounded lip, the postpalatine torus. This lip continues posteriorly as a ridge that bounds the choanal orifice. Lateral to the ridge is a broad, shallow trough in which a small foramen of unknown function resides. Two small palatine foramina occur within the palatine opposite M1.

Upper premolars are unknown. The alveolus of P4 indicates a large (as wide as M1) double­rooted tooth ( fig. 1 View Fig ). The external edges of M1–3 (V14126.2), prepared from a coprolitic nodule in which V14126.2 is also contained, are seemingly etched by acid ( fig. 1 View Fig ). The first upper molar resembles M2 except in being slightly shorter lingually. The description of the upper molar is based primarily on V14126.1 (the holotype; fig. 1 View Fig ). The tooth is low crowned, wider anteriorly than posteriorly, and has one large lingual and two small labial roots. The protocone is the largest cusp of the tooth and is more lingually extended than the hypocone, although the tips of the two cusps are aligned anteroposteriorly. Lingually, the protocone and hypocone are separated by a shallow valley that deepens toward the hypocone. In occlusal view, the protocone has a large wear facet on its posterior surface; this aligns with the orientation of a wear facet on the posterior surface of the metaconule. The protocone connects with the paracone by a low, strong preprotocrista that forms a curved anterior edge of the tooth. A small, transverse enamel lake is present at the labial end of the preprotocrista and is lingual to the paracone; this suggests the presence of a small paraconule on an unworn tooth. The paracone and metacone are placed on the labial margin of the tooth. The paracone is larger and more labially positioned than the metacone. The two cusps are separated by a notch at the labial edge of the tooth. A small cuspule is at the posterolabial base of the paracone, probably representing the mesostyle. The metaconule is larger than the paracone or metacone. It is connected lingually with the protocone by a short postprotocrista and labially with the metacone by the premetaconule crista. Between the swollen metaconule and the metacone, an enamel bay is formed. The anterior surface of the metaconule is bare dentine, forming part of the concave trigon basin. The hypocone is distinct and separated from the protocone by a narrow valley. It merges labially with the postcingulum, forming the hypocone shelf. The hypocone shelf forms an oblique valley that parallels the plane aligning the wear facets on the posterior sides of the protocone and metaconule. This concave area is covered with thin enamel between the protocone and metaconule, whereas the rest of the shelf is bare dentine. This oblique orientation and the wear facets on the hypocone shelf fit well against the oblique wear facets on the lower molars (see below). The last upper molar is narrower than M1 and M2 and retains the basic molar pattern ( fig. 1 View Fig ).

The mandible (V14127.2) is 4.82 mm deep at m1 and 2.42 mm thick at m2. Tooth marks occur on the medial surface of two mandibles (V14127.1–2). Breakages in the mandibles (V14127.1–2), both in cross section and along the lingual surface, reveal no incisor under the molars. The narrow space ventral to roots of molars also indicates that the incisor probably ends anterior to the first molar. The incisor preserved in V14127.3 shows that it probably extends posteriorly to the level of p4. On the lateral surface of the mandible the anterior edge of the masseteric fossa is aligned with the talonid of m3.

No lower premolar is preserved. The molars are all double­rooted. The m1 and m2 differ mainly in m2 being larger ( fig. 2 View Fig ). The trigonid is short and has a steep posterior wall. A partial anterior cingulid occurs labially below the protoconid. The protoconid and metaconid are subequal in size, the latter cusp being higher and more anteriorly placed. A wear facet is present on the anterolabial side of the protoconid. A similar facet, having the same orientation, occurs on the hypoconid. The paracristid and protocristid are complete and straight, enclosing the trigonid basin anteriorly and posteriorly. The talonid is longer and wider than the trigonid. All talonid cusps are high. The hypoconid, the largest talonid cusp, is elongated labially. The cristid obliqua is strong and extends anterolingually from the hypoconid to join the posterior wall of the trigonid near its midpoint. In little worn specimens, the mesoconid is distinct. Following wear the cristid obliqua becomes a sharp ridge; the lingual surface of the cristid obliqua forms a flat wear facet that merges posteriorly with the facet on the posterolingual side of the hypoconid, obliterating the mesoconid. The entoconid is anterior to the hypoconid and separated from the hypoconulid by a narrow gap. The gap is deeper on m2 than on m1. The wear facets on the anterolabial surfaces of the entoconid and hypoconulid are extensive, forming the lingual wall of a V­shaped talonid basin that slants from a point between the hypoconid and hypoconulid to the point between the metaconid and entoconid. The valley is oriented diagonally, as indicated by the arrow in figure 2c View Fig . Orientations of the valley and the wear facets indicate anterolingual movement of the tooth row during mastication. The hypoconulid is widely and deeply separated from the hypoconid. The cusps are more robust on m3 than on m2; nevertheless, the basic pattern of the two teeth is comparable except that the hypoconulid forms a distinct third lobe on m3. The posterolingual surface of the hypoconulid bears a large wear facet. Unworn m 3 in V14127.4 exhibits a distinct mesoconid. A small enamel peak rises between the hypoconid and hypoconulid in V14127.1 ( fig. 2e View Fig ).

COMPARISON: Eomylus   was named based on specimens from the late Paleocene of Mongolia ( Dashzeveg and Russell, 1988), including E. zhegdenensis   and E. borealis   . In the same study, another taxon, Khaychina elongata   , was proposed based on a fragmentary mandible with molars from the Naran Member of the Naran­Bulak Formation. Based on a larger sample of specimens including articulated dentitions from the late Paleocene Zhigden Member of the Naran Bulak Formation at Tsagan Khushu, Kondrashov and Lopatin (2003) were able to recognize that the holotype of E. zhigdenensis   , a fragmentary maxilla with M1–2, and the holotype of Khaychina elongata   (PSS 30­3, Dashzeveg and Russell, 1988) are conspecific; thus, Khaychina   and K. elongata   are junior synonyms of Eomylus   and E. zhigdenensis   , respectively.

In the previous study of the Bayan Ulan Fauna, Meng et al. (1998) tentatively referred some specimens that have the incisor ventral to the cheek teeth and ending at the first molar to? Khaychina elongata   , although the possibility that these specimens represent a new taxon was also entertained. The diastema on the fragmentary mandible (V14127.3) appears long, which is the main reason for the tentative referral, but the lower cheek teeth resemble those of Khaychina elongata ( Dashzeveg and Russell, 1988)   . For instance, as recognized by Dashzeveg and Russell (1988: 143), an oblique groove crosses the talonid basin of Eomylus   from the notch between the metaconid and entoconid to another notch between the hypoconid and hypoconulid; the hypoconulid is well separated from both the entoconid and hypoconid and on m3 forms a distinct third lobe. Given the observations of Kondrashov and Lopatin (2003), however, Khaychina   should be a junior synonym of Eomylus   . With additional specimens, particularly upper cheek teeth collected since 1998, we here regard these Bayan Ulan specimens as a new species.

Eomylus bayanulanensis   is the smallest of the three species, although the size differences between these species are not significant. Its m1 and m2 are less transversely extended than those of E. borealis   . The partial anterior cingulid on the lower molars and relatively smaller hypoconulid of E. bayanulanensis   also distinguish it from E. borealis   . 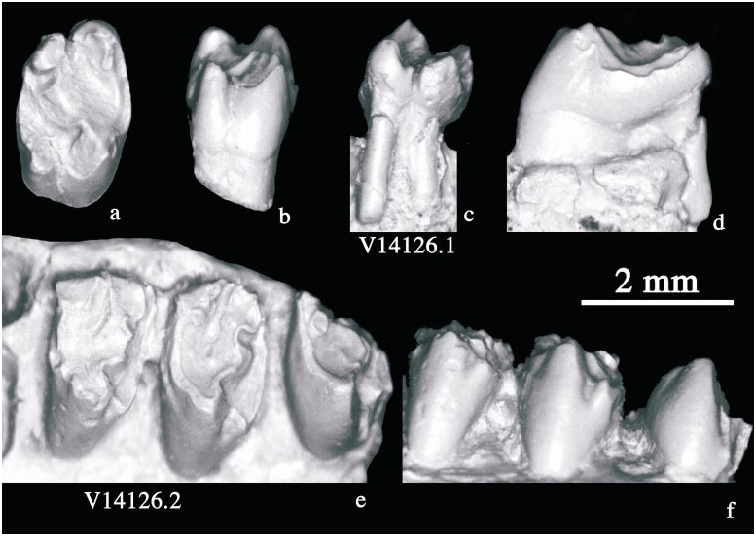 Fig. 2. Lower cheek teeth of Eomylus bayanulanensis, n.sp. a, b, lateral and medial views of a partial right mandible with m1–3 (V14127.1); c–e, occlusal, lingual, and labial views of m1–3. Arrow indicates the direction of trough created by wear.