Synoptic description: The adult facies of biedermanata  and miamata  are very similar, differing in only two aspects: the intensity of DFW maculation; and the proportion of ferruginous and gray scales. Wing shapes are identical, ascertained by overlaying digital photos. Since there are no apparent genitalic differences between the two taxa, I consider miamata  to be a gray phenotype of biedermanata  that has adapted to a different larval host and roosting substrate color. A morphological synopsis is now presented.

Discussion: The male holotype of biedermanata  probably was collected near Charles Robert Biederman’s cabin in Carr Canyon, Huachuca Mountians, Cochise Co., Arizona. In April 2004 I visited the cabin, which is being maintained by the current property owners, and collected biedermanata  in UV light traps placed below the nearby larval host trees, Arbutus arizonica (A. Gray) Sargent. Hereford  , which is the closest community and Post Office, lies outside of Carr Canyon and lacks typical habitat for this moth. Palmerlee was a mining town and Post Office in the late 1800 s and early 1900 s located at the mouth of Miller Canyon, Huachuca Mountains.

Both type specimens are missing their abdomens, and according to McDunnough (1949: 598) the abdomen associated with the male was from a specimen of E. miamata  : “An abdomen that had been glued on the holotype male at some time proved on dissection to be that of miamata Cassino  , and obviously, therefore, the wrong abdomen. In the female allotype the abdomen is missing.” Cassino illustrated the male valvae of miamata  , but Cassino & Swett did not for biedermanata  . I contend that the abdomen examined by McDunnough was in fact that of the HT of biedermanata  , and since he did not have additional specimens of biedermanata  for examination, he did not realize that the genitalia of the two taxa are identical. To my knowledge, miamata  is known from only 6 males (HT in MCZ, paratype in CNC, NMNH, 3 in AMNH) and the allotype female ( MCZ) whose genitalia McDunnough illustrated. I examined the NMNH genitalic slide “HWC [H. W. Capps] # 1100, 10 Mar. 1941 ” labeled a female paratype of miamata  , but the genitalia are clearly from E. vitreotata  , and bear no resemblance to those of miamata  = biedermanata  . I could not find Cassino’s second female paratype. Specimens from Cochise Co., Arizona identified as miamata  in several museum collections proved to be typical biedermanata  . This confusion has certainly arisen from McDunnough’s comment. The location of McDunnough’s genitalic slide of the glued­on abdomen from the biedermanata  HT is unknown (not at the MCZ). Based on comments about miamata  (1941, p. 190), his illustrations (fig. 16 A) of the male genitalia probably were made from the paratype illustrated here in Fig. 4View FIGURE 4. Adults of biedermanata  are illustrated in Figs. 1View FIGURE 1 (pair), 2 a (male holotype), 3 (female allotype); adults of the miamata  gray color form are shown in Figs. 2View FIGURE 2 b, 3–5. The genitalia of both sexes of biedermanata  match very closely McDunnough’s illustrations for miamata  (text fig. 16 A, p. 724), and Cassino’s drawings of the male valvae ( Fig. 6View FIGURE 6 shows a direct comparison).

Biology. The larval host of typical biedermanata  is Arbutus arizonica (A. Gray) Sargent  , Arizona madrone. Adults emerge in April while the host flowers are budding, with oviposition apparently at the bud bases. Mature larvae feed in the white to pinkish flowers and are cryptically patterned and colored to blend with them; pupation occurs in May (fide N. McFarland). Adult color matches the bark of the newer growth branchlets on which the flowers occur and which are the presumed roosting substrate. Based upon specimen yields in light traps placed at the bases of the host trees and at distances, adults do not normally stray very far from hosts. Fig. 22View FIGURE 22 illustrates typical habitat, with vegetation in addition to Arizona madrone including oaks ( Quercus emoryi Torrey  , Q. oblongifolia Torrey  ), manzanita ( Arctostaphylos pungens Humboldt, Bonpland, Knuth  ), and alligator juniper ( Juniperus deppeana Steudel  ). Arbutus arizonica  is restricted to Cochise, Graham, and Pima counties. The larval host of the gray phenotype may be another shrub with gray or grayishbrown bark to which the moth is color­adapted.Manzanita does occur where the gray form has been collected, but its bark is reddish­brown or mahogany colored. A possible host candidate is quinine bush ( Garryaceae  ), Garrya flavescens Wats.  (= G. mollis Greene  ), which is recorded from Coconino and Gila counties with Oak Creek Canyon the type locality for G. mollis  . This shrub has grayish­green bark and blooms from January to April, depending upon elevation and location.

Additional discussion: Because he did not have genitalic preparations of biedermanata, McDunnough  placed this species in a different group from miamata  and gilvipennata Cassino & Swett, 1922  . Based upon the genitalia in both sexes, biedermanata  and gilvipennata  appear to be closely related, and have asymmetric male genitalia. E. gilvipennata  has a broad geographic distribution in western North America from Arizona to southwest British Columbia. Adults are polyphenic ( Fig. 13View FIGURE 13) and larger than biedermanata  . The specimen ( Fig. 13View FIGURE 13 c) illustrated by McDunnough (1949: pl. 31, fig. 11) as a topotypical miamata  proved upon my dissection to be gilvipennata  . The genitalia ( Fig. 14View FIGURE 14) differ in two major respects: male, the apex of the left valva is narrower and more acute than in biedermanata  , and although somewhat variable the concave indentation is smoothly curved with a strongly sclerotized edge; female, there is a distinct notch in the shoulder where the ductus seminalis emerges from the ductus bursae. There are two additional species in Arizona that sometimes have been confused with gilvipennata  : scabrogata Pearsall and hohokamae Rindge (1963: fig. 3 male genitalia; fig. 7 female genitalia).Adults of the latter are polyphenic and look very similar to gilvipennata  ; scabrogata ( McDunnough, 1949: pl. 31, fig. 12, adult; fig. 16 B, genitalia) is nearly uniformly gray with variable fine dark DFW maculation. The valvae in the male genitalia are symmetrical with essentially smooth and convex outer margins; ventral plates are long, slender, and not bifurcated. The female genitalia differ substantially from gilvipennata  and from one another. Bolte’s (1990: fig. 286 a, b) illustrations of the genitalia of gilvipennata  show the extent of variation in the outer edge of the left valva (cf. fig. 14 a). His illustration of the ventral plate (fig. 14 e), however, appears to be from scabrogata. 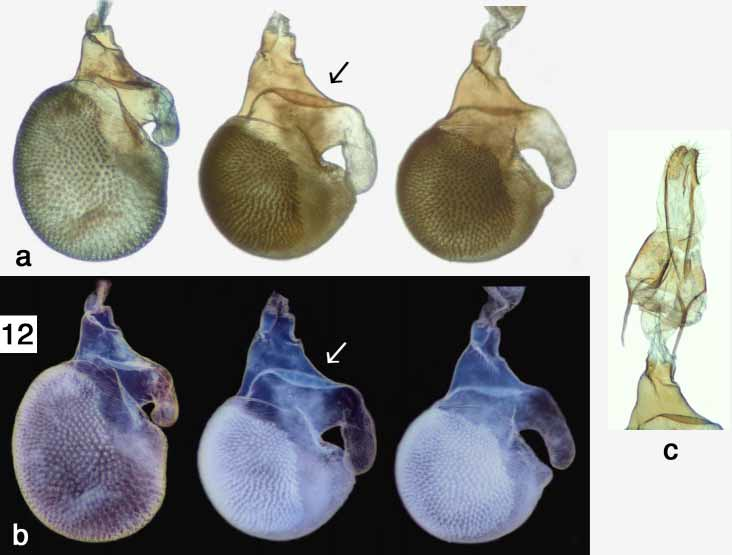