AMNH LC-B6: A piece of amber containing a complete but minute (0.60 mm body length), wingless thrips, presumably a nymph (fig. 7C, D). The body is slightly compressed and distorted, the opaque body contents preventing observation of cuticular microsculpture, chaetotaxy, and sutures. The head is not well preserved, being partially collapsed, but the postocular region does not appear long (as in Phlaeothripidae ); mouthparts are not visible. Antennae are preserved well enough to reveal segment proportions, cuticular microstructure, and sensilla (fig. 12B), their total lengths 440−460 μm. There are seven antennomeres, plus a minute terminal stylus, with relative lengths: 7> 5 = 3> 4> 6 = 1> 2. Most antennomeres have very fine transverse wrinkles and minute setigerous pimples; article 3 is the broadest and bears sensorial plaques, several of which also appear to occur on article 2; sensory cones appear to be absent, as do any thickened, blunt, setiform sensilla (fig. 12B). Femora are moderately thick (approximately twice the thickness of the tibiae); tarsi appear to be 1-segmented (best seen ventrally on the midlegs). Abdomen is somewhat fusiform in shape, with a small lateral lobe on most tergites (6 are visible) bearing a pair of recurved setae (fig. 12A). Presumably there is a pair of these lobes on each of the segments. Apex of the abdomen appears laterally compressed, the tip rounded and bearing a pair of long setae.

In lieu of wings and other structures it is difficult to definitively place the thrips to family, though the antennal structure provides good information. Seven antennomeres are found in the Uzelothripidae and in most Thripidae and Phlaeothripidae (which also have 1-segmented tarsi); thrips plesiomorphically have nine antennomeres. Uzelothripidae is highly doubtful, since the fossil does not have antennomeres 3 + 4 fused or an annulate apical segment (also, the family is monotypic in the Recent fauna, and has just one fossil species, in Early Eocene Oise amber from France [ Nel et al., 2011]). Phlaeothripidae further have sensoria on segments three and four, but given that the postocular region of the head in LC-B6 does not appear long (perhaps preservational), and the terminal abdominal segment is not tubular, placement of the fossil in this family is uncertain. Phlaeothripidae and Thripidae comprise some 85% of the approximately 6000 living species of thrips, and they have diverse diets, which include phytophagy, pollenivory, and mycophagy. The oldest Thysanoptera are Late Triassic ( Grimaldi et al., 2004); the oldest Thripidae and Phlaeothripidae occur in Early Cretaceous amber and are diverse in Cenozoic ambers ( Nel et al., 2010). This is the northernmost fossil occurrence of Thysanoptera . 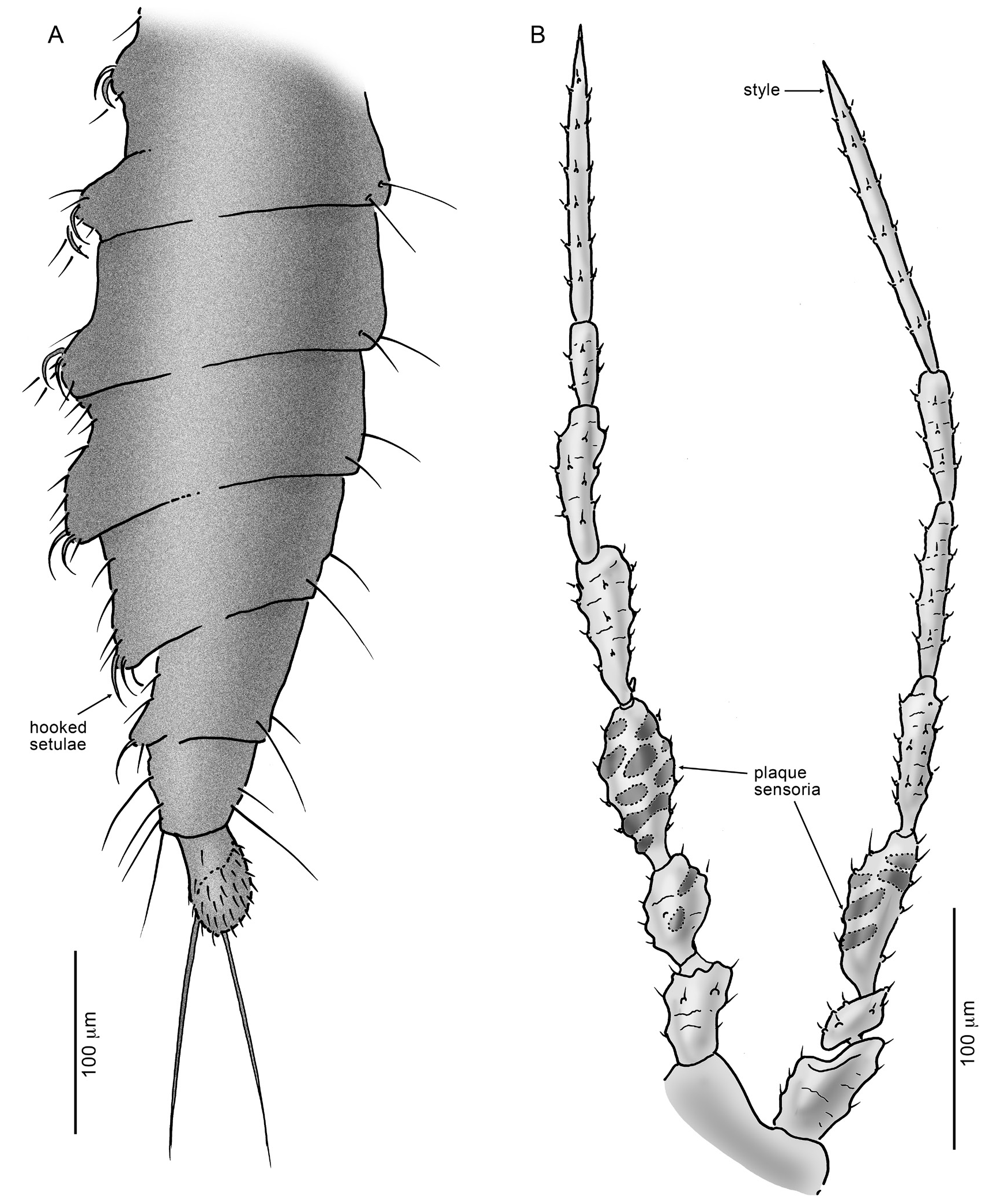