Dugesia verrucula   is characterised by the presence of the following features: large size of the live worm, usually exceeding 3.5 cm in length; asymmetrical openings of the oviducts into the bursal canal; subterminal opening of the ventrally displaced ejaculatory duct; vasa deferentia symmetrically opening into the postero-lateral portion of the seminal vesicle; well-developed duct between seminal vesicle and diaphragm; single dorsal bump near root of penis papilla; bursal canal with pleated wall and spacious posterior section; unstalked cocoons; chromosome complement diploid with 16 metacentric chromosomes.

The average annual temperature of the tropical monsoon rain forest in the Shiwan Dashan Mountain National Natural Reserve ranges between 20 and 25 °C, while in the coldest month (January), the average temperature is ca. 10-3 °C. The worms were collected from a pond under a waterfall on the Shiwan Dashan Mountain, with a water temperature of 8.4 °C, while air temperature was 5.5 °C (Fig. 9A, B View Figure 9 ). It is noteworthy that the water temperature is lower than the coldest average temperature of the tropical monsoon rain forest and that, thus, the worms live under relatively harsh climatic conditions, as compared to that of the forest itself. At collection, ten specimens were sexually mature. After ca. 30 days of culturing under laboratory conditions, the animals produced unstalked spherical cocoons (approx. 1.5 mm in diameter) that were firmly attached to the glass wall of the containers. Newly laid cocoons at first were red but turned dark brown after two or three days. After 10-20 days, 8-11 juveniles hatched from each cocoon. Juvenile planarians were light brown, after ca. 2 days, measuring 1.5-2.0 mm in length and 0.18-0.21 mm in width. After approximately 50 days, the animals measured 15-20 mm in length and 1.4-1.8 mm in width and were sexual (Fig. 9C View Figure 9 ). Fission was not observed in the laboratory culture.

The body of live, sexual specimens measures 2.8-3.9 mm in length and 1.8-2.8 mm in width. Low-triangular head provided with two blunt auricles and two eyes, which are located in the centre of the head and placed in pigment-free spots and house numerous retinal cells (Fig. 9C View Figure 9 ). Dorsal surface brown, excepting the pale body margin and an accumulation of pigment following the outline of the pharynx. Furthermore, there is a dark brown mid-dorsal stripe, extending from the head to the posterior end of the body. The ventral surface is light brown.

Pharynx situated in the mid-region of the body and measuring ca. 1/5th of the body length (Fig. 9C View Figure 9 ). Mouth opening located at the posterior end of the pharyngeal pocket. Outer pharyngeal musculature composed of a subepidermal layer of longitudinal muscles, followed by a layer of circular muscles; inner pharyngeal musculature composed of a thick subepithelial layer of circular muscles, followed by a layer of longitudinal muscles (Fig. 11A View Figure 11 ).

Ventral ovaries located at a short distance behind the brain, occupying ca. 1/6th of the dorso-ventral space (Fig. 11B View Figure 11 ). The oviducts run ventrally in a caudal direction posteriorly to the genital pore, after which they curve dorsally to open separately and asymmetrically into the ventral portion of the bursal canal. The right branch opens dorsally to the left one, the latter actually opening into the common atrium (Figs 11C View Figure 11 , 13 View Figure 13 , 14 View Figure 14 ).

The well-developed testes are situated dorsally and provided with mature spermatozoa (Fig. 12A View Figure 12 ). On either side of the midline of the body, testicular follicles are arranged in five or six longitudinal zones and extend from the posterior level of the ovaries to almost the posterior end of the body.

Because of the ventrally displaced course of the ejaculatory duct, the penis papilla is asymmetrical, with its dorsal lip being considerably larger than the ventral lip. The conical or sub-cylindrical penis papilla has an oblique, ventro-caudad orientation and is covered by an infranucleated epithelium, which is underlain by a subepithelial layer of circular muscle, followed by a layer of longitudinal muscle fibres. Near its dorsal root, the penis papilla is provided with a pronounced bump (Figs 12D-H View Figure 12 , 13 View Figure 13 , 14A View Figure 14 ).

The most characteristic feature of D. verrucula   is the permanent dorsal bump on its penis papilla, a similar character being known only from Dugesia gibberosa   Stocchino & Sluys, 2017. However, the latter is provided with two dorsal bumps on its penis papilla instead of one, while its ejaculatory duct opens terminally at the tip of the papilla ( Stocchino et al. 2017), in contrast to the subterminal opening in D. verrucula   .

Apart from the penial bump and the subterminal opening of the ejaculatory duct, other characteristic features of D. verrucula   are the asymmetrical penis papilla with ventrally displaced ejaculatory duct (character 1, state 1 in Sluys et al. 1998; see also Stocchino et al. 2017), and the presence of a duct between the seminal vesicle and the diaphragm (character 5, state 1 in Sluys et al. 1998). Besides D. verrucula   , these two character states are also expressed in the following species: D. andamanensis   (Kaburaki, 1925), D. austroasiatica   Kawakatsu, 1985, D. batuensis   , D. bengalensis   , D. borneana   Kawakatsu, 1972, D. burmaensis   (Kaburaki, 1918), D. deharvengi   Kawakatsu & Mitchell, 1989, D. gibberosa   , D. hymanae   (Sivickis, 1928), D. indonesiana   Kawakatsu, 1973, D. japonica   , D. lindbergi   De Beauchamp, 1959, D. mertoni   (Steinmann, 1914), D. naiadis   Sluys, 2013, D. notogaea   Sluys & Kawakatsu, 1998, D. novaguineana   Kawakatsu, 1976, D. ryukyuensis   Kawakatsu, 1976, D. siamana   Kawakatsu, 1980, D. tamilensis   Kawakatsu, 1980, D. majuscula   , D. umbonata   (see Sluys et al. 1998; Sluys et al. 2013; Stocchino et al. 2017; Song et al. 2020; Wang et al. 2021). However, these species all differ from D. verrucula   in the gross anatomy of the copulatory apparatus or in detailed character states, such as the openings of the oviducts (common oviduct or symmetrical openings, in contrast to the asymmetrical oviducal openings in D. verrucula   ), opening of the ejaculatory duct at the tip of the penis papilla (terminal, in contrast to the subterminal opening in D. verrucula   ), or presence of a penial valve (absent in D. verrucula   ).It is noteworthy that the cocoons of D. verrucula   are unstalked, since usually in species of Dugesia   the egg capsules are provided with a pedicel ( Sluys and Riutort 2018), the only other exception being D. bifida   from Madagascar ( Stocchino et al. 2014). However, in other aspects of their reproduction D. verrucula   and D. bifida   are rather different, in that in the latter cocoons were produced by ex-fissiparous, sexualised specimens, which had developed hyperplasic ovaries; the juveniles emerging from these fertile cocoons gave rise to new fissiparous clones. This reproductive strategy differs much from the fully sexual life cycle of D. verrucula   . 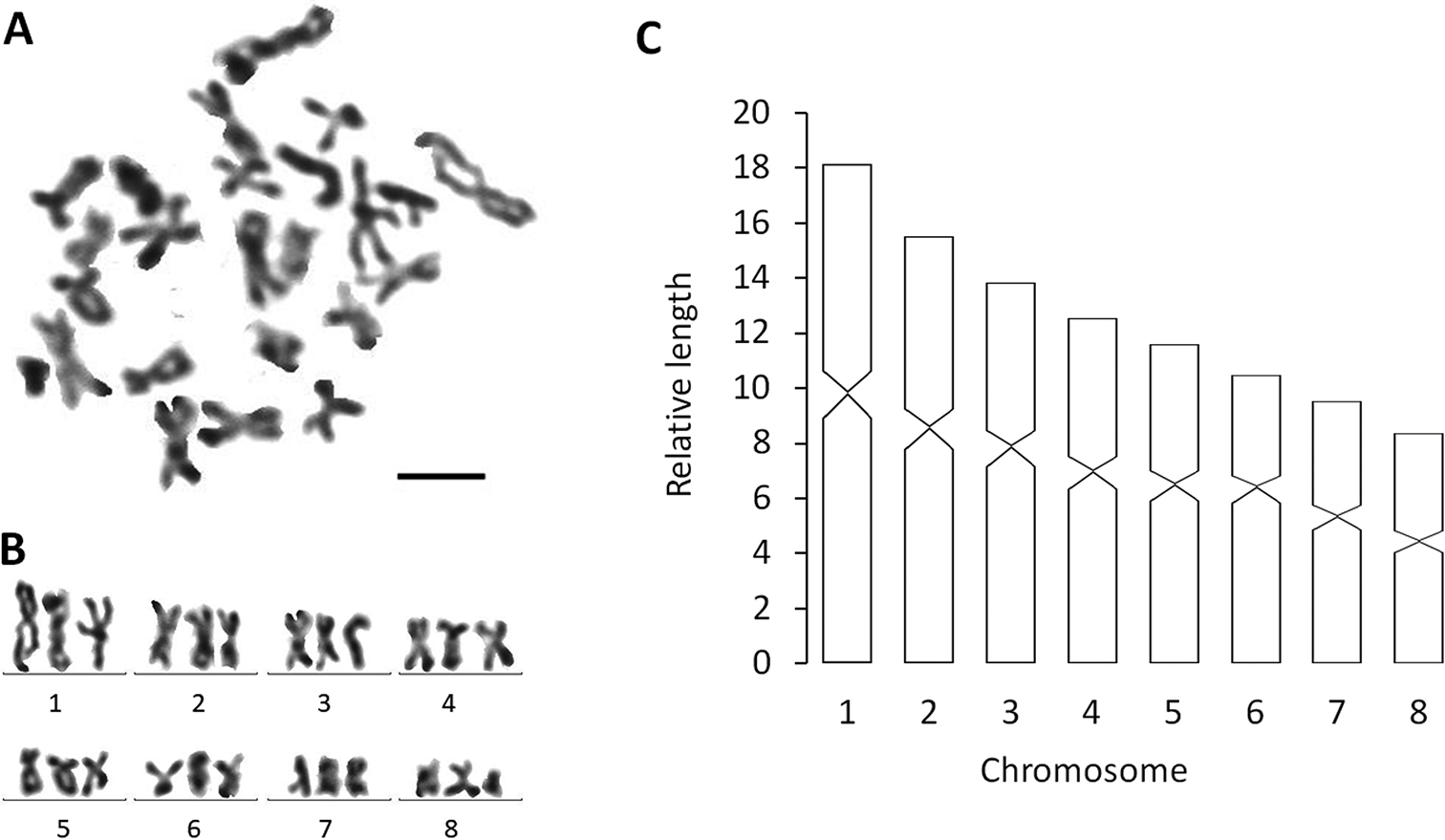 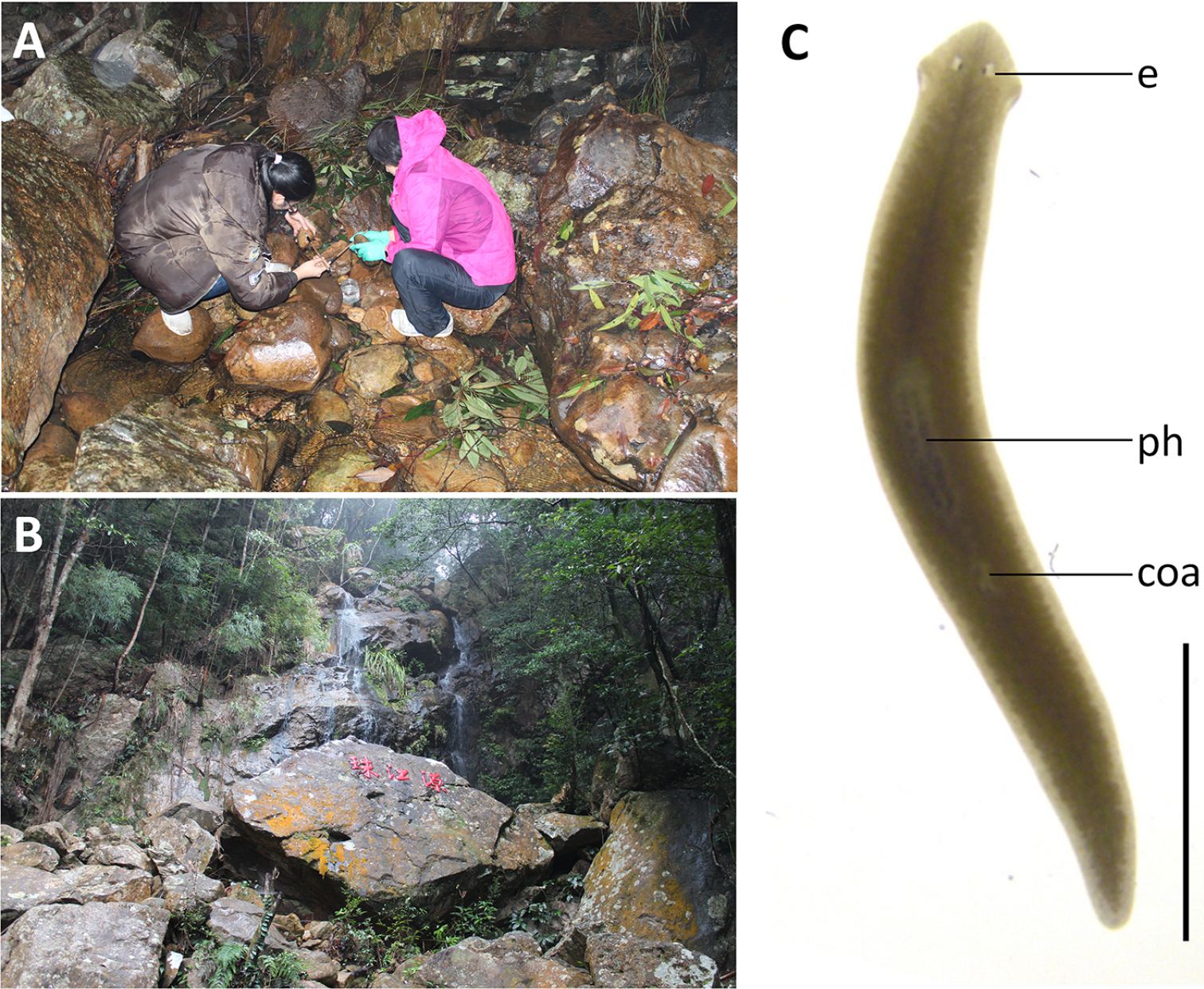 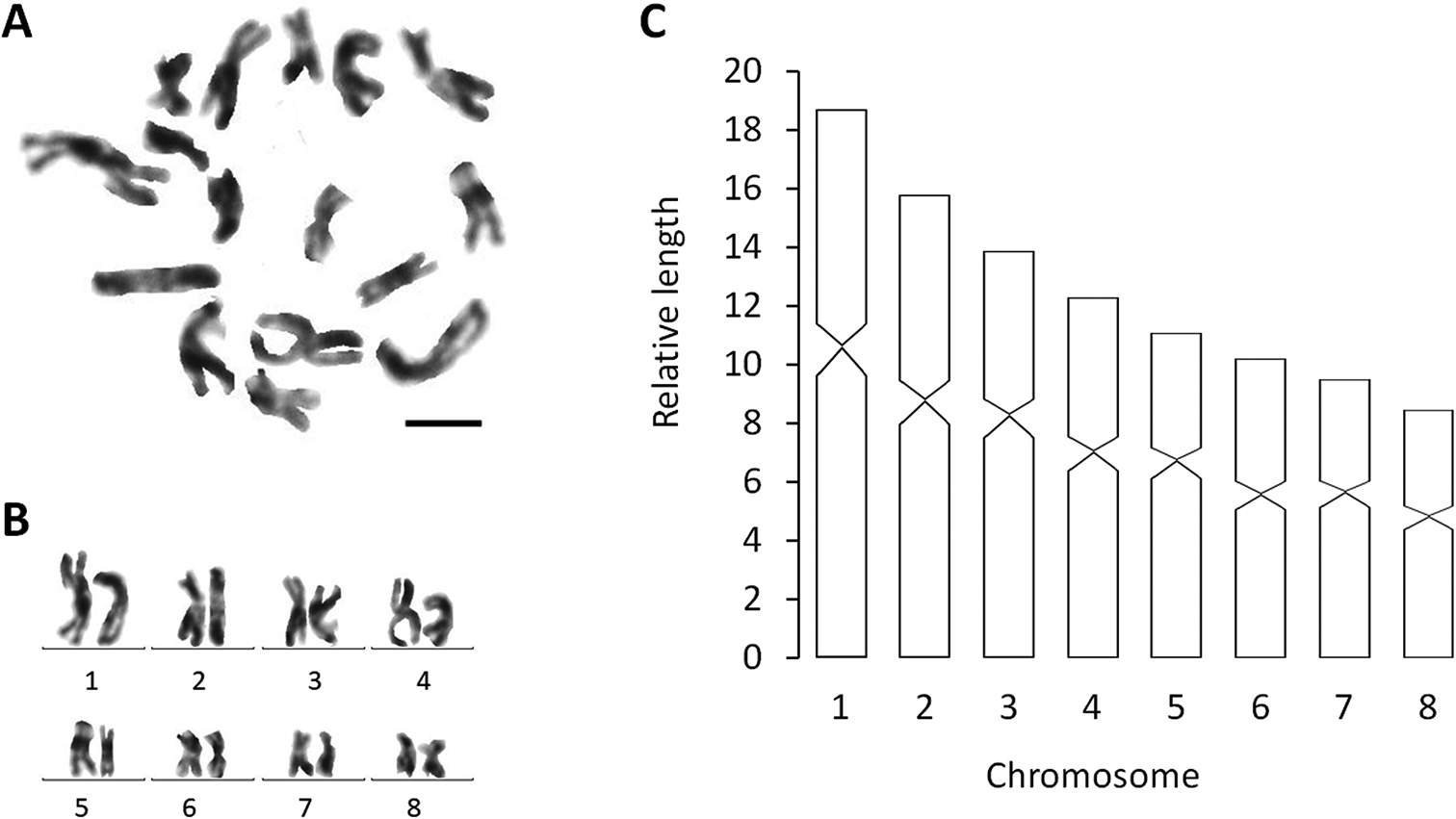 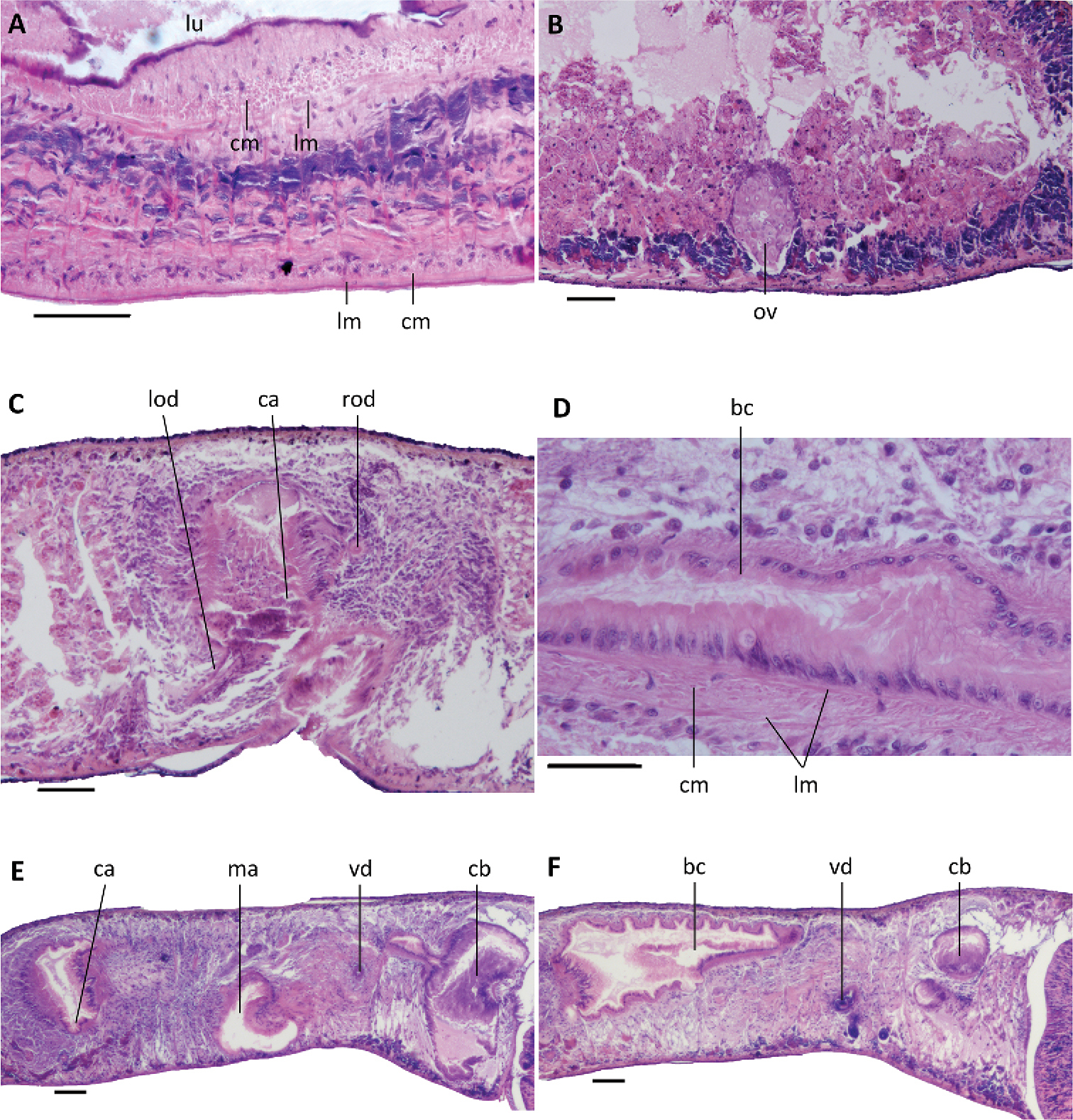 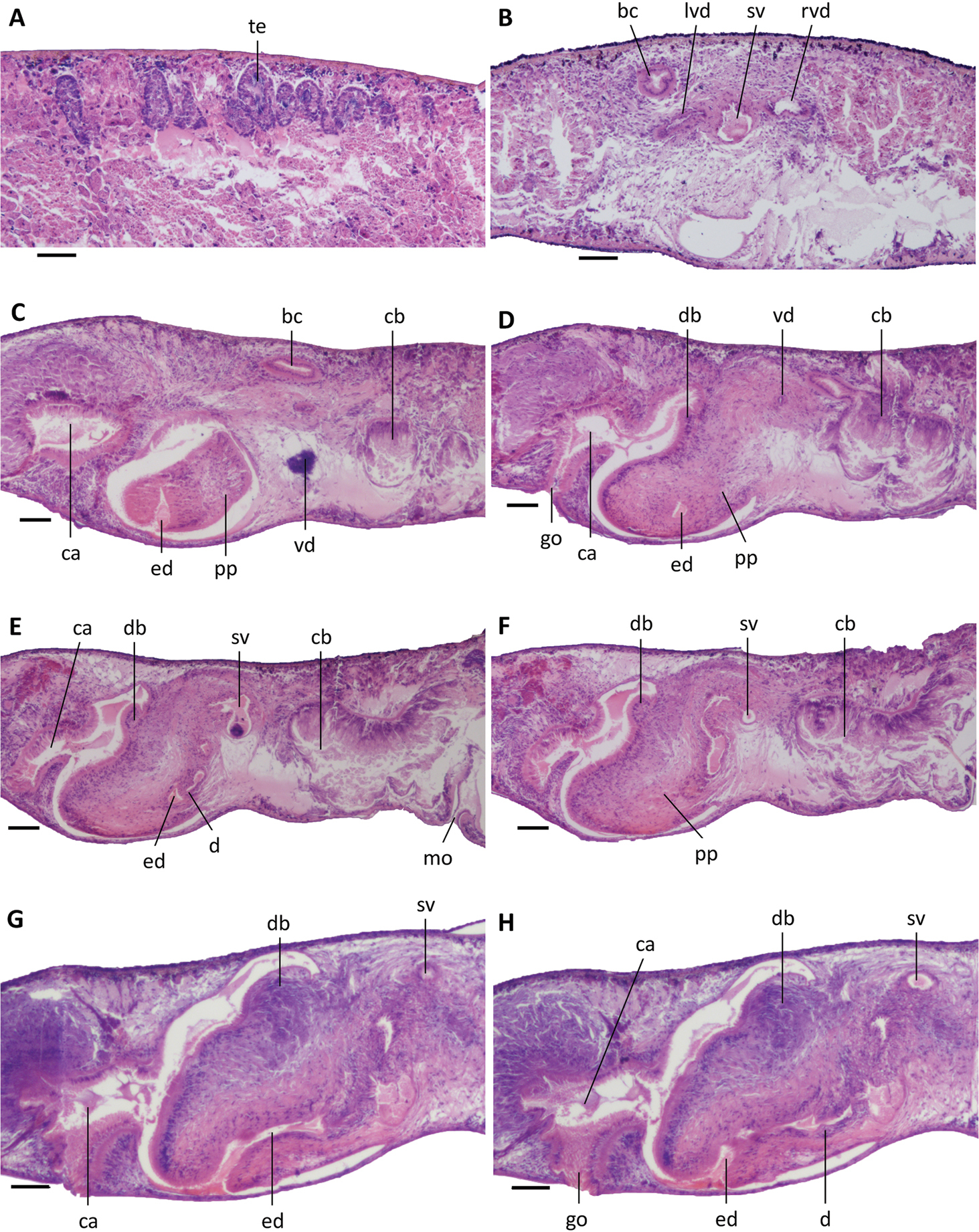 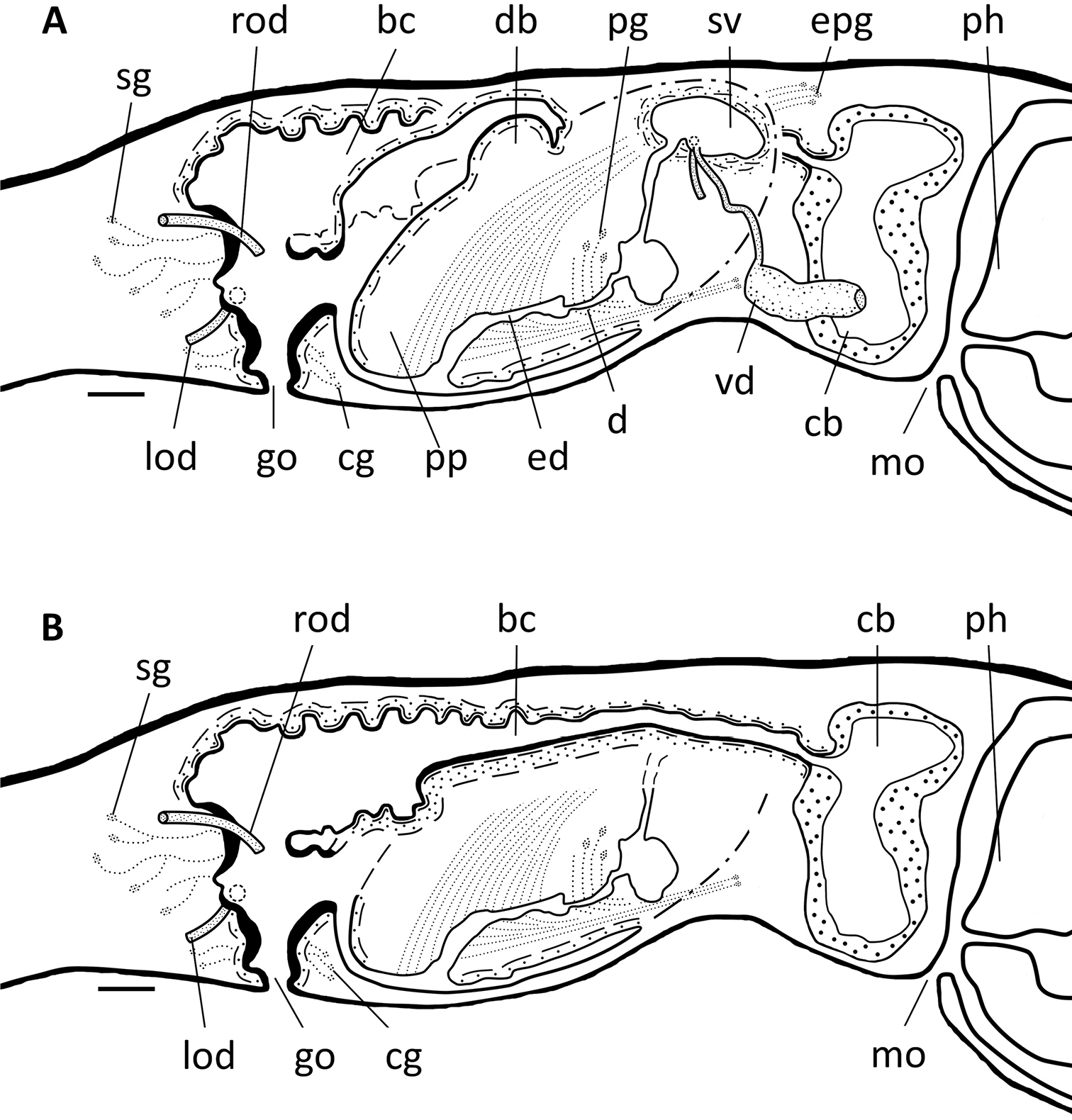