Anurophorinae with all abdominal segments clearly separated and a Proisotoma -like furca: manubrium with few anterior chaetae (1+1-3+3), dens slender, crenulated, with rather numerous anterior and posterior chaetae, mucro clearly set off from dens, with two or three teeth. 7+7-8+8 ocelli in known species. With simple or bifurcate maxillary palp and four sublobal hairs, two or four prelabral chaetae. Macro s-chaetae 22235 on Abd.I-V. Tergal macro s-chaetae on abdomen situated in front of p-row of chaetae. B-row of chaetae on Ti.1-2 complete (both B4 and B5 present). Ventral chaetae on Th.III present or absent. Sexual dimorphism present or absent.

Position of the genus in the subfamily Anurophorinae .

To date an appropriate generic name did not exist for the small group species related to Proisotoma Börner, 1901 sensu lato which were discussed in the monograph of Potapov et al. (2006). This group, so-called " Proisotoma tenella , Proisotoma ripicola , Proisotoma biseta ", consists of forms sharing characters such as: the three last abdominal segments separated, manubrium with anterior chaetae, four prelabral chaetae, and presence of three and five s-chaetae on Abd.IV and V, respectively.

Recently, one more species, Proisotoma sedecimoculata (Salmon, 1943), became a probable candidate to belong to this group ( Potapov and Janion-Scheepers 2017). This species was described by Salmon (1943) as Folsomia sedecimoculata and was afterwards proposed as a generotype for the new genus Bagnallella Salmon, 1951. Bagnallella was erected based on three last abdominal segments fused, bidentate mucro and eight ocelli. Later, Bagnallella was lost in the taxonomy of the subfamily and was mostly treated as a junior synonym of either Folsomia or Proisotoma . After the examination of the type specimen, it was discovered that the three last abdominal segments were actually separated ( Potapov and Janion-Scheepers 2017). Here, we suggest restoring Bagnallella for the group of species mentioned above, rather than erecting a new generic name. Several other forms described under different generic names also fit to Bagnallella at lesser or larger degree of accuracy. For these species, the two Bagnallella key characters were mentioned in the associated descriptions or were seen by us, apart from three forms with unknown sensillar chaetotaxy. Nevertheless, we suppose the last ones (notated with question marks in the list of species of Bagnallella below) belong to the genus. Among these species, Bagnallella sedecimoculata is poorly described and so is not the best to be a generotype, but we prefer to keep a generic name already created by John Salmon.

The incertae sedis genus Bagnallella combines the characters of two large generic groups by the separation of its two last abdominal segments and the presence of three and five s-chaetae on Abd.IV and V respectively in characteristic position. The former character is a diagnostic feature of the Proisotoma Börner, 1901 complex, the latter indicates basic set of s-chaetae in Cryptopygus Willem, 1902 and related genera belonging to Cryptopygus complex ( Potapov et al. 2006, 2013, 2020). The latter complex is characterized by the fusion of the two last abdominal segments. The genus Bagnallella takes a neatly intermediate position between Cryptopygus ( Cryptopygus complex, Southern Hemisphere) and Scutisotoma ( Proisotoma complex, Northern Hemisphere). The three genera share, apart from the characters of the subfamily, the presence of a furca, a mid-tergal position of macro s-chaetae on body tergites, and the absence of any specific apomorphy. The combinations of the two key characters mentioned above are shown in Figure 1 View Figures 1–4 . After the separation of the two last abdominal segments, we suggest treating Bagnallella in the Proisotoma complex.

Distribution and ecology of

Bagnallella . The genus is distributed worldwide. More local species ( B. davidi , B. douglasi , B. mishai , B. biseta , B. koepckei ) are distributed in the Southern Hemisphere that indicates further relation to the “austral” genus Cryptopygus . Due to apparent ruderal B. tenella and pioneer B. ripicola , the genus also occurs in the Northern Hemisphere. The ecology of the former species is especially remarkable, as B. tenella is often recorded in mass abundances ( Agrell 1939; Arle 1970; Neves and Mendonça 2016). We speculate that B. davidi has an unusual biology and ecology due to its morphological modifications (described below).

Descriptions and remarks to species of the genus.

Below we give the diagnosis, description, remarks, and distribution, with, if possible, ecological remarks of all species of Bagnallella . Some sections may be omitted if the associated species have good morphological descriptions in the literature. 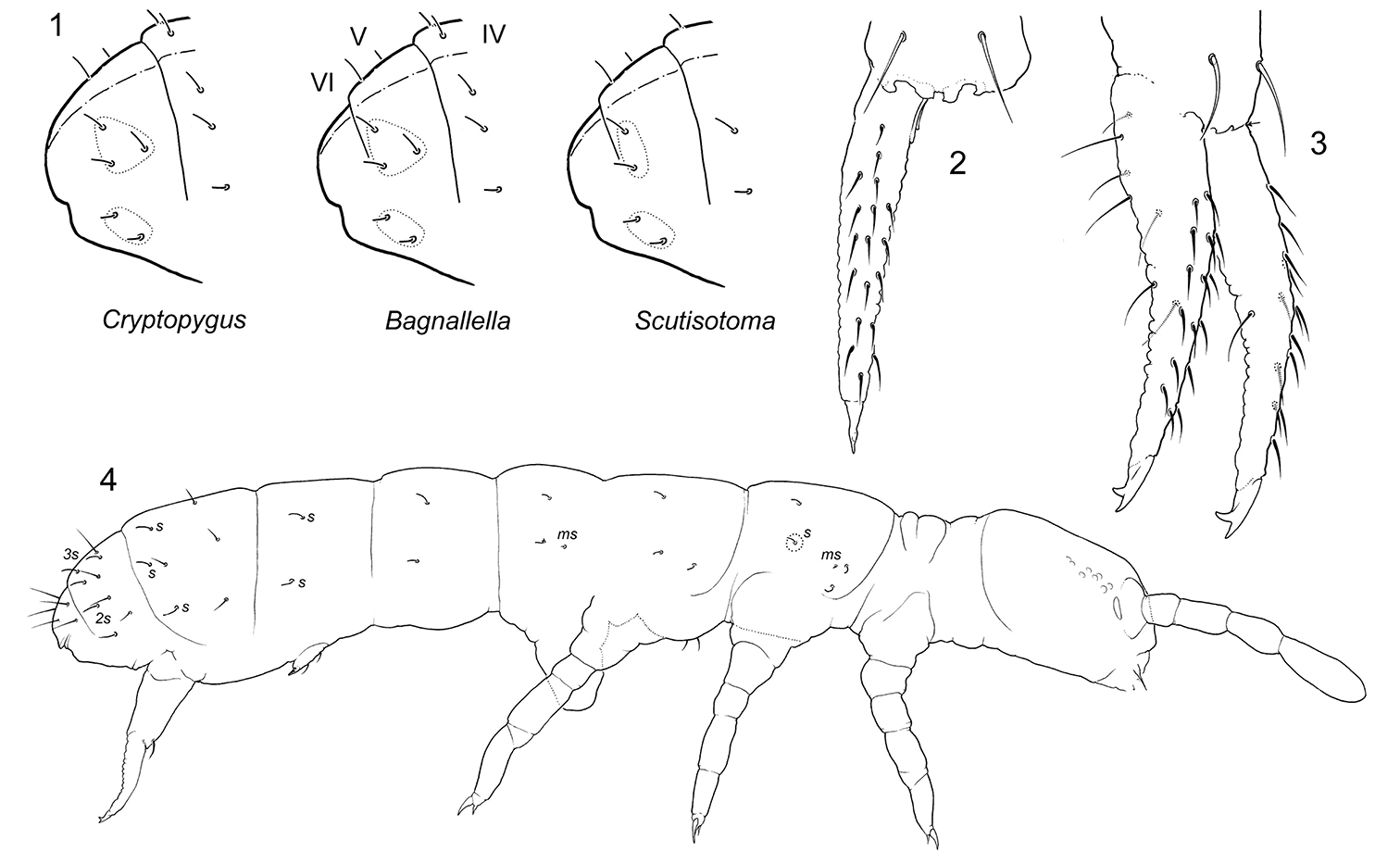