The lectotype, 17/ 14 mm, is designated here ( ZMB 31640 View Materials a). All other syntypes become paralectotypes. According to the original description, the type material included only three specimens. However, five possible syntypes could be located in museum collections, all from Sydney, Australia: 2 specimens, one of which, dissected with male parts remaining inside (17/ 14 mm), is designated as lectotype ( ZMB 31640 View Materials a) and the other one, still entire (17/ 17 mm), is a paralectotype ( ZMB 31640 View Materials b); 1 specimen destroyed, in pieces and completely dried ( ZMB 39035 View Materials ); and 2 specimens ( ZMH 27476 View Materials /2), both entire. It is unclear exactly which specimens Semper used for the description, but it is safe to assume that the anatomical details he provided are based on the only two dissected specimens. Two species of Paromoionchis   gen. nov. are present in Sydney, P. tumidus   and the species described here, which are cryptic externally but distinct internally. Thus, the specimens that were not dissected by Semper could belong either to P. tumidus   or to the species treated here. Hence the necessity of designating a lectotype in order to clarify the application of the name Onchidium daemelii   .

Live animals are often covered with mud, in which case their dorsal color can hardly be seen. The background of the dorsal notum is brown, occasionally mottled with darker or lighter areas. In addition, in some animals, the tip of dorsal papillae (with and without dorsal eyes) can be bright yellow. The foot is gray. The hyponotum is gray (same color as the foot), yellow, or both (yellow outer ring and gray inner ring). The color of the foot and of the hyponotum of an individual can change rapidly, especially when disturbed. The ocular tentacles are gray or brown, and may or may not be speckled with white dots, like the head. The ocular tentacles are short (just a few millimeters long).

The male anterior organs consist of the penial complex (penis, penial sheath, vestibule, deferent duct, retractor muscle) and the accessory penial gland (flagellum and hollow spine). The hollow spine of the accessory penial gland is narrow, elongated, slightly curved. Its base is conical. Its diameter is approximately 80 μm for most of its length, except at its base (200 μm) and tip (60 μm). Its length ranges from 2.5 mm ([1519] AM C.468917.001) to 2.7 mm ([1521] AM C.468919.001), and its shape does vary between individuals ( Fig. 29 View Fig ). The penial sheath is narrow and elongated. The retractor muscle is short (shorter than the penial sheath) or even vestigial (its distal end being free in the visceral cavity, with no clear insertion). The deferent duct is highly convoluted, with many loops. Inside the penial sheath, the penis is a narrow, elongated, soft, hollow tube of approximately 100 μm in diameter; internally, the penis bears a few smooth (no hooks) longitudinal ridges.

Externally, Paromoionchis daemelii   cannot be distinguished from other species of Paromoionchis   gen. nov. ( Table 3). Also, its internal anatomy (accessory penial gland, vestigial penial retractor muscle, smooth penis) is very similar to that of P. boholensis   gen. et sp. nov. The distribution range of P. daemelii   overlaps with that of only one species of Paromoionchis   gen. nov., P. tumidus   ( Fig. 6 View Fig ). Both species live in similar habitats and can even be found at the same station. They can only be distinguished internally thanks to a few anatomical details: in P. daemelii   , the penis is smooth and the penial retractor muscle is very short or even vestigial, while in P. tumidus   the penis bears some tiny hooks and the penial retractor muscle inserts near the heart ( Table 3).

Paromoionchis daemelii   is found on mud or muddy logs, inside or near mangroves, or on muddy sand. It is not common in central Queensland or New South Wales, but its abundance in southern Queensland is unknown.

The publication dates of the various sections of the volume on Landmollusken by Carl Semper in the Reisen im Archipel der Philippinen series were clarified by Johnson (1969). The species name Onchidium daemelii   was first published by Semper in 1880 with one figure (pl. 20, fig. 2) but no written description. Because Onchidium daemelii   was published before 1931, ICZN Article 12.2.7 applies and the name is available (Semper’s figures are regarded as an indication accompanying the name Onchidium daemelii   ). Also, the specific name was originally spelled dämelii   . However, according to ICZN Article 32.5.2.1., the correct spelling is daemelii   . Both daemelii   (e.g., Labbé 1934a) and damelii   (e.g., Kenny & Smith 1987, 1988) are spelling mistakes.

According to our current data, there are only two species of Paromoionchis   gen. nov. in New South Wales ( Fig. 6 View Fig ): P. tumidus   and P. daemelii   . They cannot be distinguished externally but they differ anatomically ( Table 3). Both species are characterized by the lack of a rectal gland, a digestive system of type II, a male opening clearly to the left of the right eye tentacle (Semper described a male opening under the right eye tentacle, but it is distinctly below and left of it) and an accessory penial gland. The retractor muscle of the penis of O. daemelii   , described as “very thin” by Semper, is vestigial in the lectotype, whereas the retractor muscle of P. tumidus   is not vestigial and inserts near the heart. No “teeth” (the term he used to refer to penial hooks) are mentioned by Semper in the original description of O. daemelii   , while the penis of P. tumidus   bears some hooks. Therefore, the combination of characters found in the lectotype of O. daemelii   and in Semper’s original description (retractor muscle vestigial and soft penis with no hooks) is only compatible with the species described here, not with P. tumidus   , which justifies the present application of P. daemelii   .

Onchidium daemelii   was recorded from New South Wales ( Lendenfeld 1886; Tenison-Woods 1888) and even New Guinea ( Tapparone-Canefri 1883) but it is not possible to determine whether it was identified properly without re-examining the material which these authors examined (which may or may not have been deposited). Bretnall (1919), Hoffmann (1928) and Labbé (1934a) mentioned Onchidium daemelii   without adding any new material. Finally, Kenny & Smith (1987) published an ecological study on a species they identified as Onchidium damelii   in a mangrove on Magnetic Island, Queensland. However, given that P. daemelii   is rare in northern and central Queensland and that its identification requires detailed study of the internal anatomy, Kenny & Smith likely studied P. tumidus   rather than P. daemelii   (or a mix of both species). 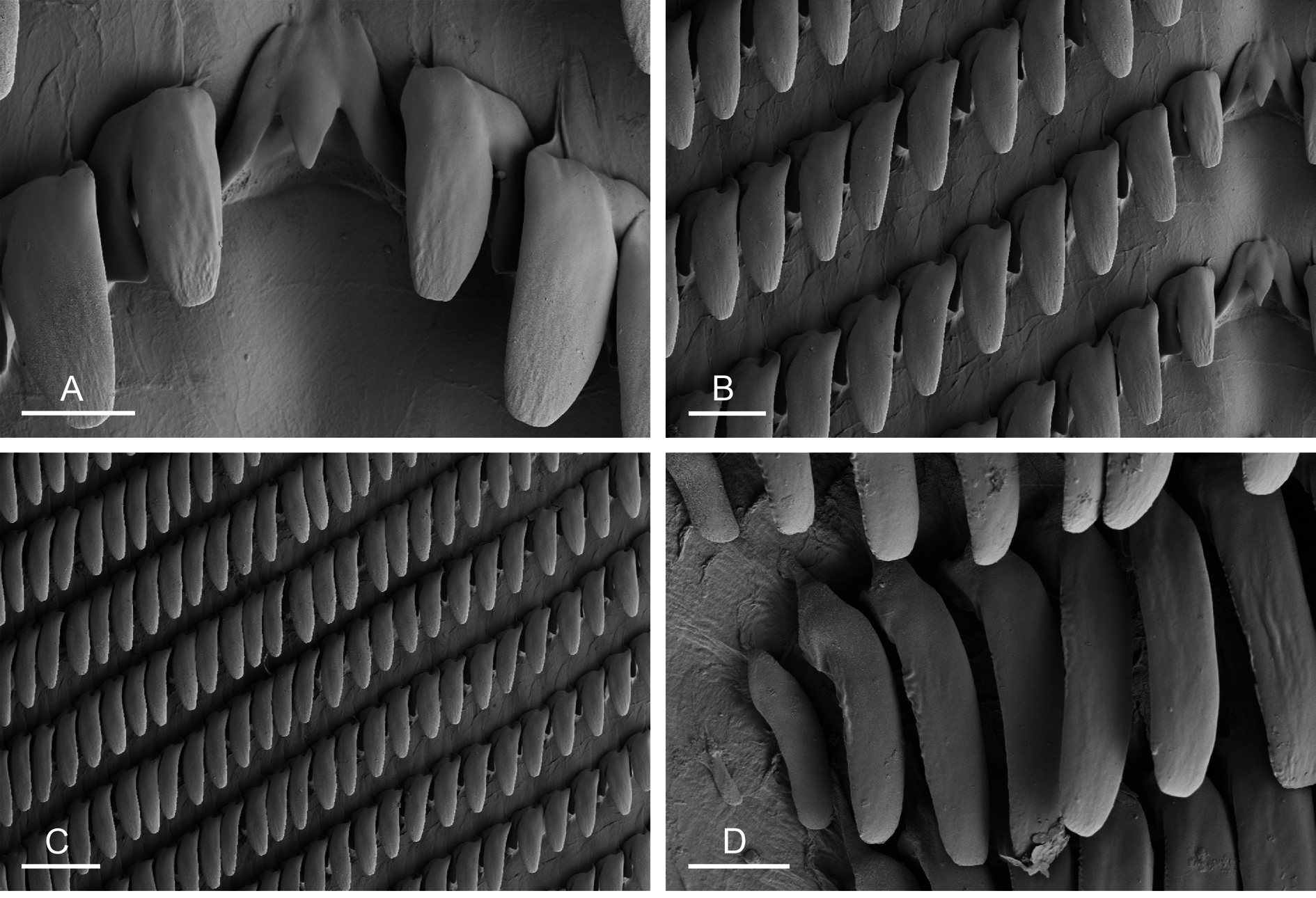 Fig. 6. Geographic distribution of the five species of Paromoionchis gen. nov. Distinct colors are used for each mitochondrial unit found in P. tumidus (Semper, 1880) comb. nov., P. boholensis gen. et sp. nov. and P. goslineri gen. et sp. nov., and the colors used for each unit are the same as those used in Figs 1–5. Colored areas correspond to hypothetical ranges proposed based on known records (all of which are new here except for the type localities of P. tumidus and P. daemelii (Semper, 1880) comb. nov.).