Student’s t -test used for SVL, Mann–Whitney test used for body proportions. Abbreviations are as defined in the Material and Methods.

The type locality of this taxon is Malacca, Peninsular Malaysia. Boulenger (1887) stated that the types of labialis   had dark spots dorsally, illustrated in his plate X, fig. 1, and that males had no humeral glands. Boulenger (1920) gave the SVL range of three male syntypes as 34–36 mm and that of three female syntypes as 42–49 mm. We have examined the type series and have detected weak humeral glands in the

males, which have constricted nuptial pads. Our measurements are 33.6–35.8 mm for two syntypic males and 48.8 mm for a single female. We here designate that female, BMNH 1947.2.3.40, as the lectotype of Rana labialis Boulenger. A   description of the lectotype is given below   .

The relationships and specific assignments of frogs from Peninsular Malaysia are not clear. The continental populations ( Thailand and Peninsular Malaysia) of the chalconota   -like frogs clearly exhibit a great deal of genetic structure. The molecular phylogenetic analysis ( Fig. 2 View Figure 2 ) shows three distinct, genetically divergent clades (maximum uncorrected pairwise sequence divergence of 11.90%; Table 5) from Peninsular Malaysia, one of which is phylogenetically unrelated to the other two ( Fig. 2 View Figure 2 ). We attempted to amplify historical mtDNA from the lectotype of labialis   following the extraction protocol of Stuart et al. (2006), but did not succeed. Consequently, assigning any of these clades to labialis   must at this point depend on morphological data alone.

The Peninsular Malaysian specimens (and tissues) are from three localities: Gunung Jerai (about 450 km from the type locality of labialis   ), Penang Island (about 410 km) and Selangor (about 125 km). Five specimens from Penang Island and three from Gunung Jerai, in northern Peninsular Malaysia, constitute a clade (‘ cf. labialis   ’; Fig. 2 View Figure 2 ), ten from Selangor (‘ labialis   ’; Fig. 2 View Figure 2 ) constitute another and four more from Gn. Jerai form the third, distantly related clade (‘unnamed lineage’; Fig. 2 View Figure 2 ). We have examined an additional 22 long-preserved specimens from Selangor without associated tissues. All Selangor specimens resemble the lectotype and the other type specimens of labialis   in the prevalence of dorsal spotting; all of the types have the dorsal spots and 25 of the 32 from Selangor are also spotted. The Selangor frogs also agree with types in size and body proportions ( Table 7), but differ from frogs from nearby southern Thailand ( Table 8). We assign these Selangor frogs to the species labialis   .

Taxonomic assignment of the ‘ cf. labialis   ’ Malaysian frogs is not certain. They differ from the types of labialis   and the Selangor frogs we assign to that species in dorsal spotting; only one of seven ‘ cf. labialis   ’ frogs is spotted. Males of this clade have slightly wider heads (median 0.323 of SVL) than males from Selangor (median 0.296); the two arrays differ significantly (Mann–Whitney test; P <0.02). Yet the morphological differences between these two Malaysian clades are not as great as the differences between sympatric pairs of species, e.g. raniceps   and megalonesa   in Borneo (see 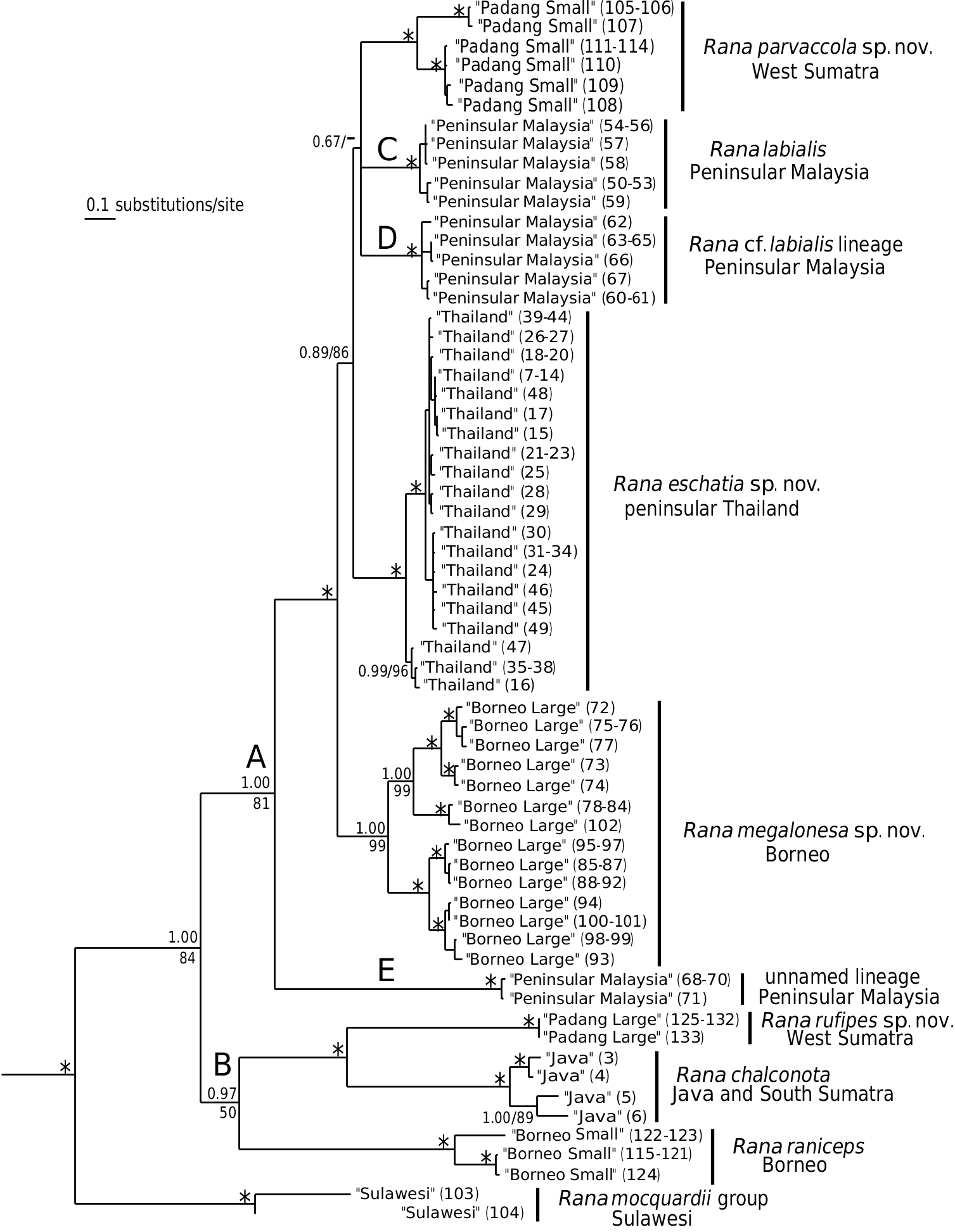