Comments. Iridomyrmex chasei , widely known for its large, populous nests, its pugnacity and its characteristic ‘crushed ant’ smell, is a familiar sight to many Australians living in temperate areas. The ant is particularly common in and around Perth, where it is occasionally reported to the Department of Agriculture as a garden nuisance. There, it has been popularly known in the past as the ‘native odorous garden ant’ (P. Davies, pers. comm.). Although the ant never nests indoors, wet weather or spilt food will infrequently bring foragers inside dwellings. This taxon is quite variable in appearance, and, to this point of time, it has been taken as an article of faith by myrmecologists that ‘ I. chasei ’ and its subspecies ‘ concolor ’ and ‘ yalgooensis ’ represent a complex of several if not many species. In fact, many hours of close examination has failed to result in the detection of discernible morphological differences across all populations. Moreover, preliminary molecular data using the mitochondrial gene CO1 has also failed to detect strong divergence in populations, the large, orange red form ‘ I. chasei ’ falling in between two samples of smaller, brownish ‘ I. concolor ’ at the end of shallow twigs on a molecular phylogram (unpublished data). The position taken here is that I. chasei is a single ‘good’ species by all the indicators that can be marshalled at present. Iridomyrmex chasei is very similar to several close relatives; however, most specimens may be distinguished from I. rufoniger (usually a distinctly larger ant) and I. fulgens by the lack of erect setae on the hind tibiae, from I. victorianus by the more steeply vertical anterior pronotum and the lack of generalised bluegreen iridescence on the gaster (coppery reflections may be present on the first gastral tergite), and from I. gibbus by the pronotal features described above, the more strongly concave posterior margin of the head and also the greater number of erect setae usually present on the pronotum in I. chasei . A few, very hirsute populations of I. chasei (mainly occurring in Western Australia) that possess erect setae on the scape and hind tibiae can be distinguished from the species I. rufoniger and I. fulgens by the lack of uniform greenish-yellow or greenish-blue iridescence on the gaster and, in the case of the very similar I. victorianus , also by the more steeply angled anterior pronotum. Also similar but smaller close relatives, such as I. difficilis , have a planar posterior margin of the head, seen in full-face view, compared with the distinctly concave posterior margin of the head in most I. chasei populations. Iridomyrmex gumnos , a very rare species, lacks pronotal setae entirely.

Iridomyrmex chasei is widespread throughout all mainland Australian states, although it is absent from Tasmania. While present in most ecosystems, it is generally replaced by other Iridomyrmex or by Anonychomyrma species in very cool, wet regions and in tropical rainforest. In drier areas, however, it is among the most conspicuous and abundant of all ant species. Single pitfall traps may contain more than 1000 workers. Even in the heart of large capital cities I. chasei shares the pavements and street verges with tramp species such as the Argentine ( Linepithema humile (Mayr)) and Big-headed ( Pheidole megacephala (Fabricius)) ants, while most rural paddocks also support large numbers of colonies. In the Perth region, ant activity for this species is most pronounced in spring and early summer, when enormous piles of soil from ephemeral nests connected by smaller nodes indicate the high point of the colony’s annual cycle. In south-western Australia, nuptial flights appear to occur sporadically throughout the year in suitably humid and usually warm conditions, and involve vast streams of workers and numbers of winged queens and males moving purposefully from their nests up high man-made structures (fence-posts, pillars, walls, etc.) and tree-trunks, from whence the reproductives launch themselves into the air. This species is very common in sandy soils, and smooth pavers can be undermined or made hazardous to walk on because of the sand displaced by thousands of workers. Long tunnels in grassy lawns, up to half a centimetre deep below the soil surface, bear witness to the streams of myriads of foragers heading back to nest nodes, their crops filled with honeydew or nectar. Iridomyrmex chasei workers regularly work trees and shrubs near their nests, where they tend sapsucking Hemiptera as well as gather nectar. This is a particularly aggressive species that will not hesitate to swarm over and bite people who are gardening, hanging out washing or engaging in other activities in yards or on front lawns. 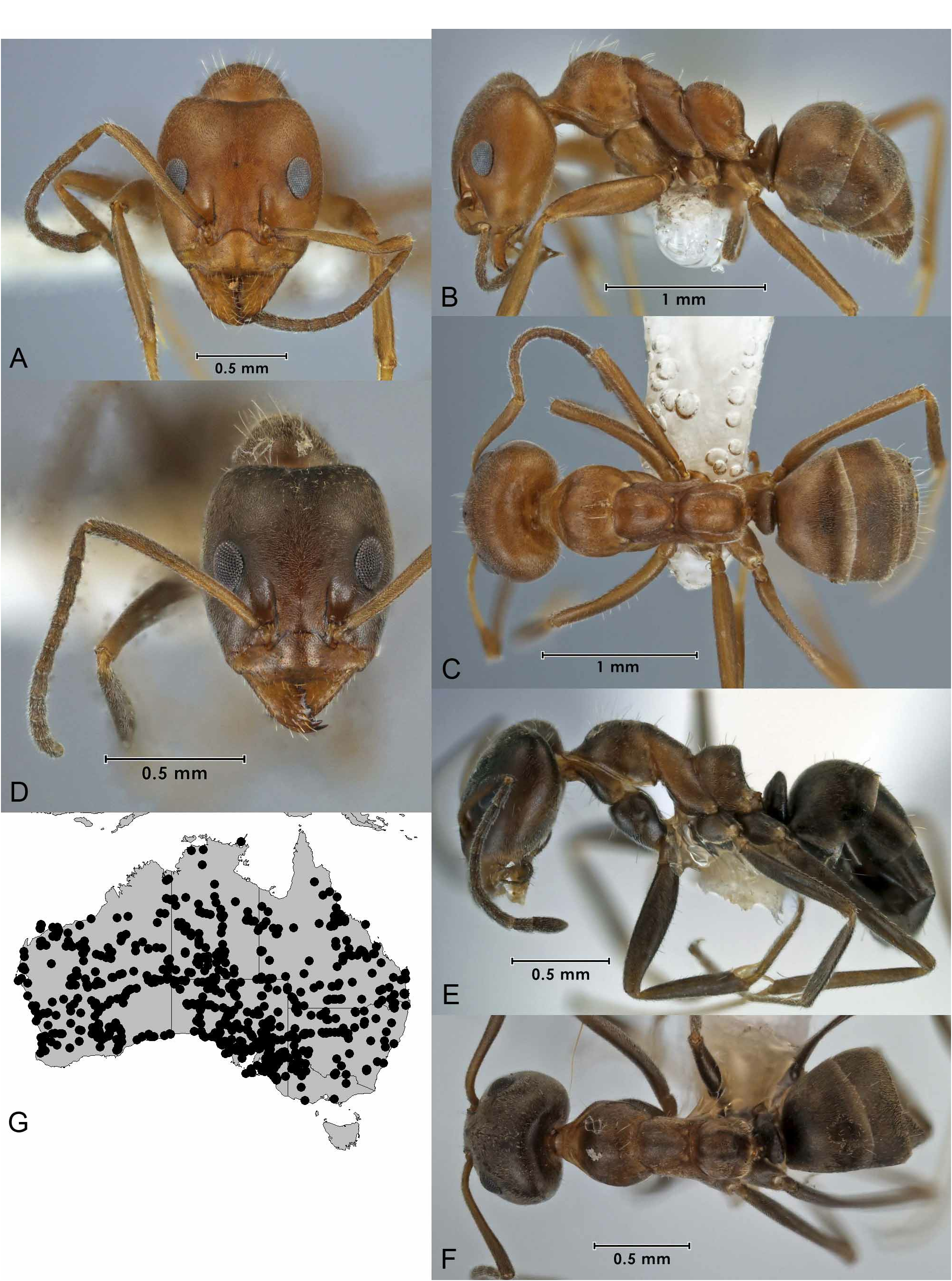