Descriptive notes. Head-body 25-33 cm, tail 31-34 cm; weight ¢.300-500 g. The Black-shouldered Opossum has a unique fur pattern, making it easily recognizable. Its overall body fur is frosted grayishbrown, fading to buffy or whitish on sides and entire head. It lacks any sort of eyerings, which are common in the majority of opossums, or any mid-rostral stripe. Most conspicuous fur features are large black patches that cover forearms from shoulders down to inner forearms and wrists. These patches join along the mid-dorsum and run parallel to each other along back, eventually fading to the overall fur color on rump. Tail length is ¢.120% of head-body length, and tail is almost completely furred, with fur present from tail base to up to 2 cm from tip on dorsal side and proximal one-third ventrally. Ventral fur is buffy and soft, long, and woolly; ears are yellowish. Female Black-shouldered Opossums are reported to have a complete pouch, but number of mammae is currently unknown. Its karyotype is unknown. There is no sexual dimorphism in skull size and shape.

Habitat. Only a few localities in Amazonian lowland mature tropical humid forests below elevations of 700 m.

Food and Feeding. The Black-shouldered Opossum is known from only a few specimens, and most information on any aspect ofits natural history is merely anecdotal. Feeding information is restricted to a few observations of individuals feeding on nectar from flowers of Quararibea cordata ( Malvaceae ) in Amazonia. Black-shouldered Opossums kept in zoos are reported to eat animals as food.

Breeding. Female Black-shouldered Opossums with young were received from animal dealers in July-August. No more than two young have been noted per female, and a captive female was photographed with two young clinging on her back.

Movements, Home range and Social organization. Black-shouldered Opossums move slowly in the canopy and have been seen hanging by their tails to feed on nectar. 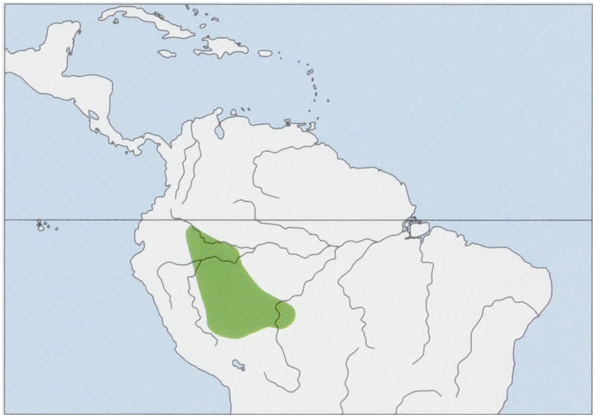