Descriptive notes. Head-body 17-21 cm, tail 19.5-22.5 cm; weight 130 g. The Bushy-tailed Opossum has a unique fur pattern and can be easily distinguished from all other species of opossums. Its dorsal fur is fawn or cinnamon-brown, sometimes with a darker stripe in the center. Head fur is unlike any other opossum’s: there is a broad, dark brown or blackish mask extending from nose across eyes and base of ears and back onto nape, and mid-rostral fur is pale gray or creamy, markedly paler than the body fur, running from nose to nape with similarly colored cheeks. The most striking feature of the Bushy-tailed Opossum is the one that gives it its common name. Tail length is ¢.110% of head-body length, and tail is completely furred from base nearly to tip—a condition found in no other opossum. Ventral surface of tail, however, is naked, possibly to maintain its prehensile ability. Ventral fur can be gray, pale brown, or buffy white. Furis long, dense, and woolly, measuring 7-8 mm long. Feet are whitish, ears are dark, naked, and oval, and eyes are black. Females lack a pouch and have four mammae, two on each side. Unlike most other species of opossums, they do not have a medial mamma. The Bushy-tailed Opossum is one of the very few opossums with this number of mammae, the lowest in the family. It has a 2n = 18, FN = 22 karyotype, with three pairs of biarmed and 14 pairs of acrocentric autosomes. The X-chromosome is probably a minute acrocentric, but the Y-chromosome is unknown because the only karyotype analyzed was that of a female.

Habitat. Primary and secondary tropical humid forests of the Amazon Basin, although some marginal localities include other vegetation types. Bushy-tailed Opossums were captured in semi-deciduous forests in Mato Grosso, Brazil, and additional individuals were sighted in tall deciduous forests (with cacti), dry woodlands, and dwarf evergreen forests in Bolivia. They can occur near humans; one individual was found under the roof of a house, and another sighting was made in the Adolfo Ducke Forest Reserve (Amazonas, Brazil), a terra firma rainforest reserve located on the outskirts of the city of Manaus. Furthermore, they may tolerate disturbed habitats or human land use; a female and her offspring were seen foraging at the edge of a forest adjacent to a pasture.

Food and Feeding. The Bushy-tailed Opossum was known only from a few specimens until recently, and there are no studies of its diet, only anecdotal reports based on sightings of feeding individuals. One individual was seen licking the surface of a branch, which could suggest feeding on gum, and a female and her three offspring were seen licking exudates from a Schefflera morototoni ( Araliaceae ) tree. They are believed to feed on insects.

Breeding. Because the Bushy-tailed Opossum is known from few specimens,very little is known ofits breeding habits, although recent reports have provided some details on its reproductive biology. A female with three fully furred young was captured in December in south-western Para, Brazil. Young were at the stage where they clung to their mother’s back; their measurements were head-body6.7-7.2 cm, tail 7.8-8.5 cm, and weight 10-12 g. Another female, also with three young estimated to be a few months old, was captured in July in north-western Mato Grosso, Brazil. Young were big enough to forage on their own, although they remained together in the presence of the mother. Another female, captured in December in Peru, had been recently lactating. These captures suggest that at least two breeding periods occur in populations of Bushy-tailed Opossums.

Activity patterns. All Bushy-tailed Opossums that were seen alive were active at night, with several records of activity during the first hours of the night or around twilight. One female with three clinging young was captured during daytime, but this happened when the tree they were in was cut down,so it is not known whether the opossums were active or sleeping.

Movements, Home range and Social organization. Bushy-tailed Opossums are usually considered to be highly arboreal. There are several observations of their climbing ability in branches, and they are frequently spotted while moving in the canopy. One individual was seen moving quickly and with agility around vines of the canopy at 15 m and was also seen jumping from one vine to the next. Another was seen emerging from a tree hole 8 m above the ground. Other Bushy-tailed Opossums were spotted at heights of 3 m or 4 m. An individual observed at 15 m was very active and was seen climbing down headfirst without using its tail. A female was observed foraging with her three offspring at 2-6 m, and another, in west Amazon, was seen jumping between two trees from a height of ¢.6 m down to ¢.3 m. This individual then jumped down to the ground and climbed a nearby tree. Although the Bushy-tailed Opossum is usually believed to be exclusively arboreal and restricted to the canopy, some individuals have been captured in pitfall traps and others have been captured in live-traps set in the understory, suggesting that occasionally they may use the lowerstrata, as do most other highly arboreal species of opossums. Postcranial skeletal morphology of the Bushytailed Opossum is consistent with arboreal habits.

Status and Conservation. Classified as Least Concern on The IUCN Red List. The Bushytailed Opossum is poorly known from only c.25 specimens, but because of its wide distribution and occurrence in protected areas,it is not under enough threat to qualify for a higher category. Its IUCN assessment mentions that parts of its Brazilian distribution are likely threatened by deforestation, although the connectivity of these areas makes the extent of this threat difficult to assess. 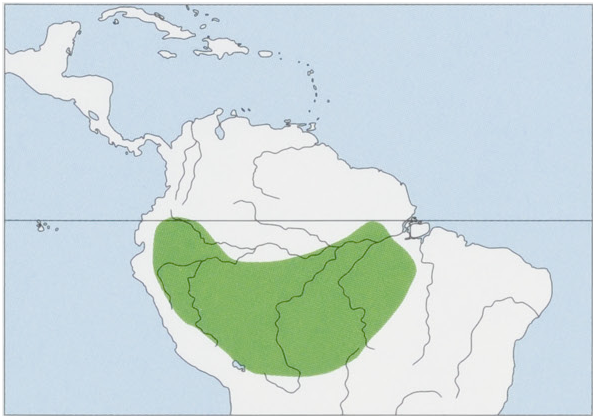