Descriptive notes. Head-body 15.2-21 cm, tail 19.5-27 cm; weight 62-130 g. Backs and body sides of the North-eastern Woolly Mouse Opossum are smoky gray-brown with pale yellowish or buff wash. Black eyes are surrounded by dark eye-rings that extend slightly toward nose, and cheeks are pale orange. Tail length is ¢.130% of head-body length, and tail is thickly furred on proximal 3-5 cm. Naked part oftail is gray-brown with a whitish tip. Fur is long, soft, and woolly. Ventral fur is yellowish, orange, or gray with an orange wash on throat and inguinal regions, flanked by broad stripes of gray-based hairs from upper chest to abdominal region. Gray-based stripes usually meet along mid-ventral region. In Pantanal populations of North-eastern Woolly Mouse Opossums, a color change has been reported, with ventral fur changing from salmon pink or orange to creamy in May-June; it is thought that this may reflect changes in diet when species of Miconia ( Melastomataceae ) and Eugenia ( Myrtaceae ), flowering plants, are more abundant. Feet are yellowish, and ears are brown and naked. Females lack a pouch and have eleven mammae, five on each side and a medial mamma. The North-eastern Woolly Mouse Opossum has a 2n = 14, FN = 24 karyotype, with all biarmed autosomes and with a biarmed X-chromosome and an acrocentric Y-chromosome. Karyotype with 2n = 14 and FN = 20 is also reported, with acrocentric Xand Y-chromosomes. Skull size and shape are sexually dimorphic.

Habitat. Tropical humid forests at elevations below 1200 m. North-eastern Woolly Mouse Opossums is often present and relatively abundant in second growth and disturbed habitats and plantations, yards, and orchards, but it also occurs in primary forests, swampy forests, and mangroves.

Breeding. Captive female North-eastern Woolly Mouse Opossums make unstructured nests with paperstrips, using their tails or mouths to carry strips. In captivity, a mother will gather young that have detached from her; she pushes young under her belly with her snout and forepaws, and young then roll on their backs, grasp her fur, and start searching for available mammae. A litter of seven young was found in the western Amazon Basin, and another with nine young was reported from Suriname. In French Guiana, mean litter size is 6-2 young, with litters of up to eleven young. In the Pantanal, litter sizes varied from nine to eleven young, and in central Brazil, they ranged from six to eleven young. Reproductively active females (with attached young or lactating) were captured in February—April (rainy season) and September—November (dry season) in western Brazilian Amazon and June—-November in central Brazil. In the Brazilian Pantanal, breeding females were found in September—-May, and the breeding season seemed to start with the wet season.

Activity patterns. There is no specific information for this species, but the North-eastern Woolly Mouse Opossum is nocturnal.

Movements, Home range and Social organization. The North-eastern Woolly Mouse Opossum is usually considered highly arboreal, foraging most of the time in upper layers of forested habitats, but it may forage equally on the ground in some sites. In a study in Paracou, French Guiana, it was captured equally often on the ground and above ground level, but other surveys at the same location reported most captures were at 1-17 m above the ground on lianas or in trees. In anothersite in French Guiana, it used all strata from the ground to 25 m but occurred most frequently at 5-10 m. It showed no preference for support diameter, climbing fast andjumping from branch to branch. Specimens of the North-eastern Woolly Mouse Opossum from different localities in Venezuela were captured in equal proportions in trees and vines and on the ground; in central Brazil, it was captured more frequently on the ground. Densities in French Guiana and Venezuela were 25-100 ind/km?®. North-eastern Woolly Mouse Opossums are solitary and do not tolerate conspecifics. In the Brazilian Pantanal, a recently released, fleeing individual tried to hide in an already occupied den; typical agonistic behavior ensued, the newcomer went away, and the den remained with the previous occupant.

Status and Conservation. Classified as Least Concern on The IUCN Red List. The Northeastern Woolly Mouse Opossum is widely distributed, its populations are presumably large, it shows some tolerance for habitat modification, and it occurs in several protected areas. 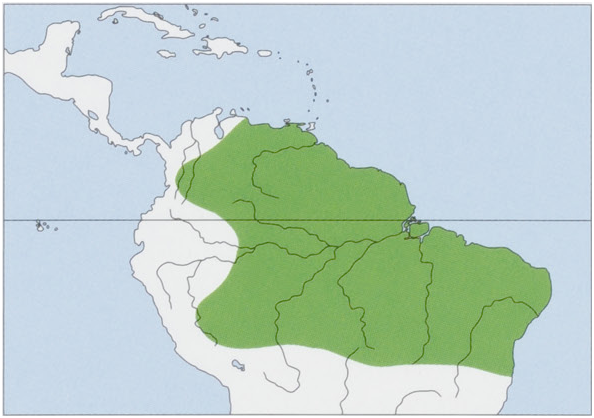