Descriptive notes. Head-body 10.5-15.9 cm (males) and 10.1-13.3 cm (females), tail 14.4-18.1 cm (males) and 13-16.7 cm (females); weight 40-87 g (males) and 29-57 g (females). Dorsal fur of the Dryland Mouse Opossum is faded yellowish or sandy brown or pale grayish-brown and paler on body sides. Head has pale mid-rostral fur that contrasts sharply with darker fur on crown of head. There is no mid-rostral stripe, and narrow dark brown eye-rings surrounding its black eyes do not extend to base of ears. Tail length is ¢.120% of head—body length,tail has fur on its proximal 10% and is grayish-brown, and naked part is paler ventrally. Ventral fur has a whitish or yellowish median strip that extends from chin to anus, flanked by whitish or yellowish gray-based fur on abdominal region, and there is a throat gland. Feet are whitish, and mature males have carpal tubercles. Female Dryland Mouse Opossums lack a pouch and have eleven mammae, five on each side, and an additional medial mamma. Karyotype is unknown. Skull size and shape are sexually dimorphic.

Habitat. Semi-arid coastal ecosystem surrounding the Gulf of Venezuela. The vast majority of the known specimens of the Dryland Mouse Opossum were captured in xeric thorn forest, and most were captured in trees and bushes. All localities are at elevations less than 100 m, with mean annual temperatures higher than 24°C and mean annual rainfall of 250-500 mm.

Breeding. A synchronized peak of female Dryland Mouse Opossums with attached young occurred in June-July during the dry season and a couple of months prior to the beginning of the rainy season. Proportion of nursing females decreased until December, and post-lactating females were found in July-February. More than 50% of the males are reproductively active in April-September, and breeding seems to be seasonal and related to availability of resources in the wet season. No reproductive activity was recorded in March—May. Presence of lactating females is positively correlated with biomass peaks of Coleoptera, larvae, and ripe fruits of species of Cactacea. Female Dryland Mouse Opossums become sexually mature at ¢.9 months, gestation lasts c.14 days, and young are born measuring 6-7 mm. Their fur is complete at ¢.36 days; they remain attached to the teats for ¢.23 days and are left in the nest for the first time at 30-32 days. Eyes and ears open at ¢.40 days of age when they start to leave the nest alone or with the mother. They are weaned and disperse at c.60 days. Majority of female Dryland Mouse Opossums produce a single litter, but a few had two litters and very rarely there were three litters. Mean number of litters per reproductive female was 1-3/year, and reported mean litter sizes were 7-9 young or 10-4 young (range 3-12 young).

Activity patterns. There is no specific information available for this species, but the Dryland Mouse Opossum is likely nocturnal.

Movements, Home range and Social organization. The Dryland Mouse Opossum uses ground and arboreal layers; captures in arboreal traps varied from 41% to 85% of the total of specimens captured. Densities varied from 620 ind/km?® at the end of the dry season in September to 2000 ind/km? in the middle of the wet season in January, with an average yearly density of 1290 ind/km®. Estimated home range size was 0-06-0-13 ha.

Status and Conservation. Classified as Vulnerable on The IUCN Red List. Distribution of the Dryland Mouse Opossum is very limited (less than 20,000 km*), and much of it has been converted to agricultural lands. Dry thorn shrub habitat is undergoing severe loss or fragmentation in Venezuela, due to a high pressure of human settlements, especially on Paraguana Peninsula, which could lead to population decline. In Venezuela, the Dryland Mouse Opossum has not been recorded from Cerro Santa Ana National Monument, but it may occur in Macuira National Natural Park in Colombia. 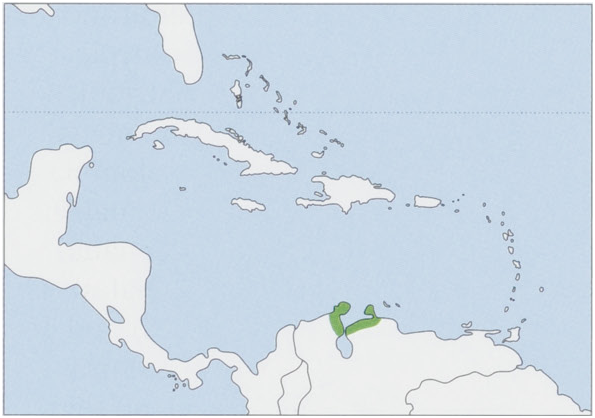