Up to nine subspecies have been recognized, but recent revisionary work raised M. simonsi and M. isthmica to full species. In that revision, there was no indication of subspecies of M. robinsoni . Monotypic.

Distribution. Panama (W to Chiriqui, and including Isla del Rey and Isla Saboga in the Gulf of Panama), N & W Colombia, N Venezuela (N of the Orinoco River), and on several islands on the continental shelf of South America and the Caribbean (Margarita, Trinidad, Tobago, and Grenada). View Figure

Descriptive notes. Head-body 11.1-21.8 cm (males) and 8.3-15.5 cm (females), tail 14.5-21.5 cm (males) and 10.1-19.5 cm (females); weight 39-110 g (males) and 16-72 (females). Robinson’s Mouse Opossum has pale to dark yellowish-brown dorsalfur, which can also be grayish-brown abundantly frosted with yellowish-brown, and slightly paler on sides of body. Head fur in mid-rostral region lacks a marked mid-rostral stripe and is paler than on crown of head. There are dark brown or blackish-brown eyerings that rarely reach base of ears. Eyes are black. Tail length is ¢.130% of head-body length, and tail has fur on proximal 10-20 mm. Naked part of tail is yellowish to dark brown, slightly paler on ventral side. Ventral fur has a pale or dark yellowish-creamy median stripe that may vary in width but is narrower on abdominal area, flanked with yellowish-brown or creamy-yellowish gray-based fur that is mostly restricted to abdominal region but sometimes extends to sides of chest. Throat gland is present. Forefeet vary from orangish to brown, hindfeet from whitish to creamy or orangish, and older males have carpal tubercles. Females lack a pouch and have 13 mammae, six on each side, and a medial mamma. Karyotype of Robinson’s Mouse Opossum is 2n = 14, FN = 24, with all biarmed autosomes, and a small biarmed X-chromosome and a very small acrocentric Y-chromosome. Skull size and shape are sexually dimorphic, and males are usually larger than females. In Venezuela, it seems that specimens from agricultural lands and disturbed forests are larger than those from more mature forests.

Food and Feeding. Robinson’s Mouse Opossum is usually reported as mainly insectivorous, but it also consumes fruit and other items, similar to most other species in the genus. Nevertheless, detailed diet studies are unavailable.

Breeding. Female Robinson’s Mouse Opossums make nests in abandoned birds’ nests and tree hollows. Sexual maturity (first estrus) is reached at 265-275 days. They are probably polyestrous, with an estimated mean estrous cycle of 23 days (range 18-31 days), and estrus lasting 2-3 days. Males are fully reproductively active after one year of age. Copulation in Robinson’s Mouse Opossum has been studied in detail in captivity. Unreceptive (usually anestrous) females will react aggressively with vocalizations and biting to any approach by males, but receptive females will remain passive or even initiate a response by sniffing indifferent males. Males always chase females for several minutes prior to mating. After this pre-copulatory behavior, a male grabs the female by her shoulders with his forefeet, bites her neck, and then grasps the cage wall or any nearby object with his tail and copulation ensues. It is likely that this tail gasping is necessary for copulation because individuals housed in cages with smooth walls initiated copulation but without insertion. Copulatory position may last up to 40 minutes, but overall mounting times with active and quiet phases have lasted up to 6-5 hours. Gestation lasts c.14 days after which young measuring 8-12 mm are born, and reported litter sizes are 2-19 young. Their fur appears at ¢.29 days and is complete at ¢.47 days. Young remain attached to the teats for c¢.30 days after which they are left in the nest for the first time. Female Robinson’s Mouse Opossums make no attemptto retrieve newborns that fail to attach to a nipple, but after a few days, they will retrieve any lost or detached young, responding to a high-frequency clicking distress call by the separated young. Eyes and ears of young open ¢.39-40 days of age when they start to leave the nest alone or along with the mother. They start eating solid food at 50-58 days and are weaned at ¢.65 days. Onset of reproduction is influenced by the rainy season in most regions. In the Llanos of Venezuela, females were lactating in May—-November, and females with attached young were observed in May, June, and August. No females were found with two consecutive litters, although length of the breeding season would allow two consecutive litters.

Activity patterns. Robinson’s Mouse Opossum is nocturnal. Its activity starts at sunset and continues all night, with intervals of inactivity.

Movements, Home range and Social organization. Robinson’s Mouse Opossums use the ground and lower arboreal strata. They are equally captured in ground and tree traps, but they usually flee by climbing the nearest tree or bush. Mean distances between successive captures in Venezuela were 42-8 m for males and 29-8 m for females, with maxima of 170-9 m and 164-9 m, respectively. Estimated densities of Robinson’s Mouse Opossum in Venezuela are 25-425 ind/km*, and home ranges vary from 0-36 ha in the dry season to 0-17 ha in the wet season, because flooding reduces available suitable habitat. Social hierarchies have been recorded in captive individuals.

Status and Conservation. Classified as Least Concern on The IUCN Red List. Robinson’s Mouse Opossum has a wide distribution, presumably has a large population, occurs in many protected areas throughoutits distribution, and is tolerant, to some degree, of habitat modification. This assessment was made prior to the revision that elevated some of its former forms to full species status. Conservation status of all opossums is being reassessed by the [UCN New World Marsupial Specialists Group, but it is unlikely that the status will change for Robinson’s Mouse Opossum. 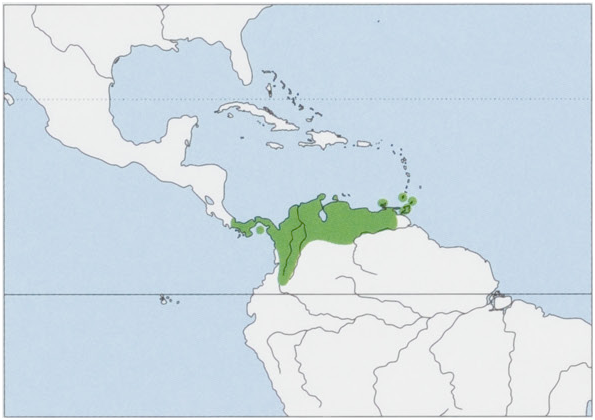 Distribution. Panama (W to Chiriqui, and including Isla del Rey and Isla Saboga in the Gulf of Panama), N & W Colombia, N Venezuela (N of the Orinoco River), and on several islands on the continental shelf of South America and the Caribbean (Margarita, Trinidad, Tobago, and Grenada).