Distribution. French Guiana and N Brazil (Amapa and S of the Amazon and E of the Xingu River in Para, including Marajo I), probably also in Suriname. View Figure

Descriptive notes. Head—body 13.8-17 cm (males) and 11:9-15.5 cm (females), tail 7:9.9-5 cm (males) and 6-5-8:5 cm (females); weight 64-100 g (males) and 40-66 g (females). Mid-dorsal fur of the Touan Short-tailed Opossum is grizzled gray, contrasting with dark reddish body sides but no dorsal stripes. Head is reddish on sides, with a narrow, sometimes ill-defined, mid-rostral band of gray fur. There is a band of red hairs above each eye, but there are no eye-rings. Tail length is ¢.55% of head-body length, tail has fur on 20-50% of its length dorsally and only at proximal part ventrally, and naked part oftail is dark brown or gray. Ventral fur is grayish-cream, with gray-based hairs, sharply contrasting with dark reddish body sides, and it is distinctly reddish on chin and throat. Fur is longer and denser dorsally (c.8 mm) and shorter ventrally (c.4 mm). Feet are dark brown or gray, and ears are small, uniformly colored dark brown or gray, and naked. Females lack a pouch, but number of mammae is not known. The Touan Short-tailed Opossum has a 2n = 18, FN = 30 karyotype, with an acrocentric X-chromosome and a dot-like Y-chromosome. There is morphological variation in pelage color: specimens from south of the Amazon have a broader middorsalstripe on head, and fur extends only ¢.20% of length oftail (it extends 30-50% in individuals from north of the Amazon), and naked part oftail is darker.

Food and Feeding. The Touan Short-tailed Opossum feeds mostly on small vertebrates, butits diet may include fruit. A female in French Guiana equipped with a radio transmitter was followed and spent her time searching for insects on the ground under fallen branches and lianas.

Movements, Home range and Social organization. There is no specific information for this species, but the Touan Short-tailed Opossum is exclusively ground dwelling.

Status and Conservation. The Touan Opossum has not been assessed as a distinct species on The IUCN Red List. At the time of the last assessment, it was considered to be conspecific with the Guyana Short-tailed Opossum ( Monodelphis brevicauda ). Conservation status of all opossums is being reassessed by the IUCN New World Marsupial Specialists Group. 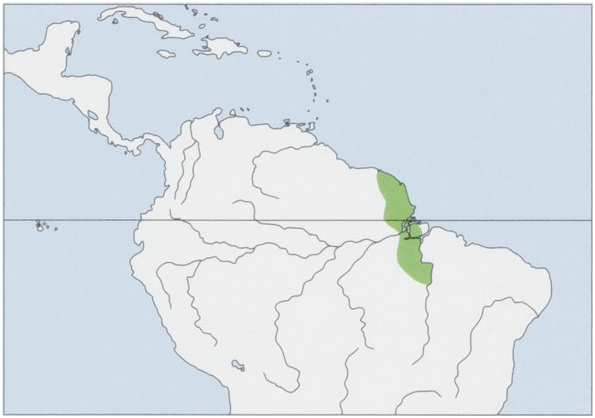 Distribution. French Guiana and N Brazil (Amapa and S of the Amazon and E of the Xingu River in Para, including Marajo I), probably also in Suriname.