High levels of intraspecific genetic divergence and morphological variability suggest that M. glirina may correspond to a species complex. As understood here, it includes M. maraxina, because it is recovered within specimens otherwise identified as M. glirina in a comprehensive phylogenetic analysis. Monotypic.

Distribution. SE Peru, N Bolivia (LLa Paz, Pando), and Brazil S of the Amazon River (Acre, Rondonia, S Amazonas, N Mato Grosso, and Para, up to the E margin of the Rio Xingu, and on the Marajo I). View Figure

Descriptive notes. Head-body 12-18 cm (males) and 11-16.5 cm (females), tail 6-5—10-6 cm (males) and 6.5-9 cm (females); weight 44-150 g (males) and 40-85 g (females). The Amazonian Redsided Opossum has light grizzled gray mid-dorsal fur, contrasting with its light orange to orange body sides. Head has broad light grayish band of mid-rostral fur occupying entire crown between eyes, and orange sides, with no eye-rings. Tail length is ¢.55% of head-body length, tail has fur on about one-sixth of its dorsal and ventral length, and naked part oftail is gray. Ventral fur is grayish cream to grayish light-orange, with gray-based hairs and no contrast with orange body sides, and it is slightly more washed with orange on throat than rest of venter. Furis longer and denser dorsally (c.8 mm) and shorter ventrally (c.4 mm). Feet are gray, and ears are small, uniformly colored gray, and apparently naked. Females lack a pouch and have nine mammae, four on each side, and a medial mamma. The Amazonian Red-sided Opossum has a 2n = 18, FN = 22 karyotype, with six biarmed and ten acrocentric autosomes, and a small acrocentric X-chromosome and a minute acrocentric Y-chromosome. Males are larger than females, and skull size and shape are sexually dimorphic. There is strong geographical variation in pelage color throughout its distribution.

Food and Feeding. Analyses of stomach contents of Amazonian Red-sided Opossums revealed diets that include Coleoptera, Orthoptera, Hymenoptera, seeds (only in females), and Diplopoda. Coleoptera was considered the only prominent category, with all the remaining considered rare.

Status and Conservation. Classified listed as Least Concern on The [UCN Red List. The Amazonian Red-sided Opossum is widely distributed, and it probably occurs in several protected areas throughout its distribution. Nevertheless, because current genetic and morphological data suggest that it may constitute a species complex, it may need to be reassessed in the future. 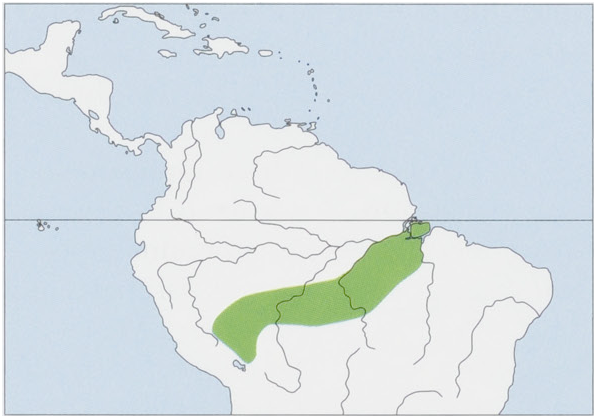 Distribution. SE Peru, N Bolivia (LLa Paz, Pando), and Brazil S of the Amazon River (Acre, Rondonia, S Amazonas, N Mato Grosso, and Para, up to the E margin of the Rio Xingu, and on the Marajo I).